One hundred years later the Message of Peace never ages

Our Lady of Fátima appeared to Lúcia, Francisco and Jacinta and asked them to pray for an end to World War I. At the centennial celebrations of the Apparitions, the Pope reminded us of the Virgin Mary’s request. 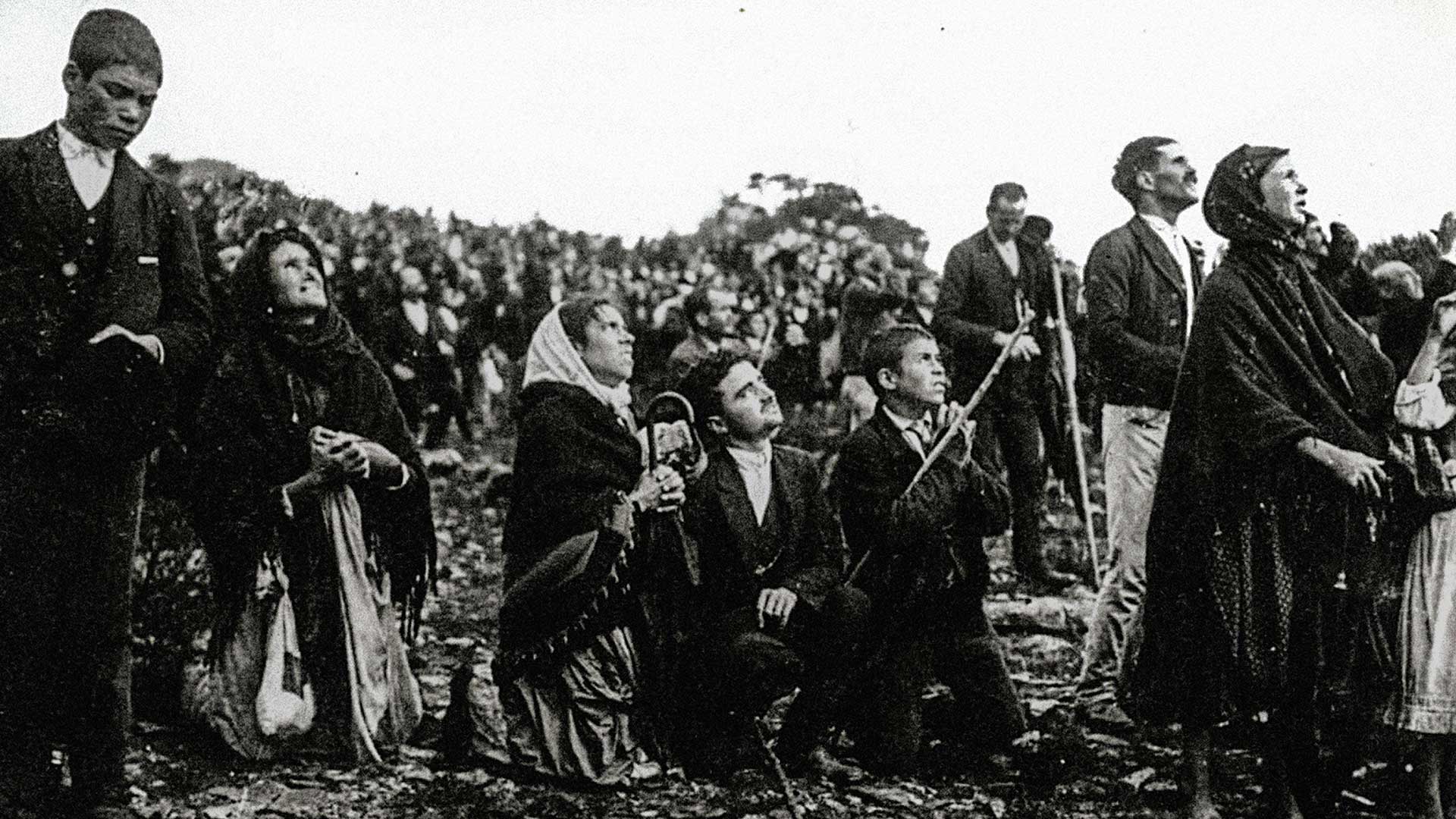 Our Lady told us “to pray the rosary in her honour to obtain peace in the world”, answered Lúcia to a priest who led one of the many enquiries the three children were subjected to during the long winter of distrust. For Francis, the fourth pontiff to visit the place where the Apparitions took place, everything can be summed up in Lúcia’s response. ‘Fátima has a message of peace that was brought to humanity by three great communicators, who were less than 13 years old, which is interesting’, he said, not in the least surprised by the coincidences during his visit.

The canonisation of the two siblings ‘was not planned from the beginning because the process of the miracles was in progress, but then all of a sudden the expert reports came back positive, and it was done, and both occurred at the same time’, he said, tirelessly repeating what the world could expect from his visit to Fátima: ‘Peace. And what am I going to talk about from now on, with whomever? Peace’. And then, silence.

One hundred years later, Francis, the Pope who declared ‘I want a poor Church, for the poor’, visited Portugal for the first time. On his itinerary, a single destination: Fátima, to, ‘as a pilgrim’ – he made sure to emphasise – preside over the 100th anniversary of the Apparitions and canonise the two siblings, Francisco and Jacinta, who died as children. Lúcia, the siblings’ cousin and the oldest of the three children whom Our Lady asked to learn to read and write, lived to be 97. 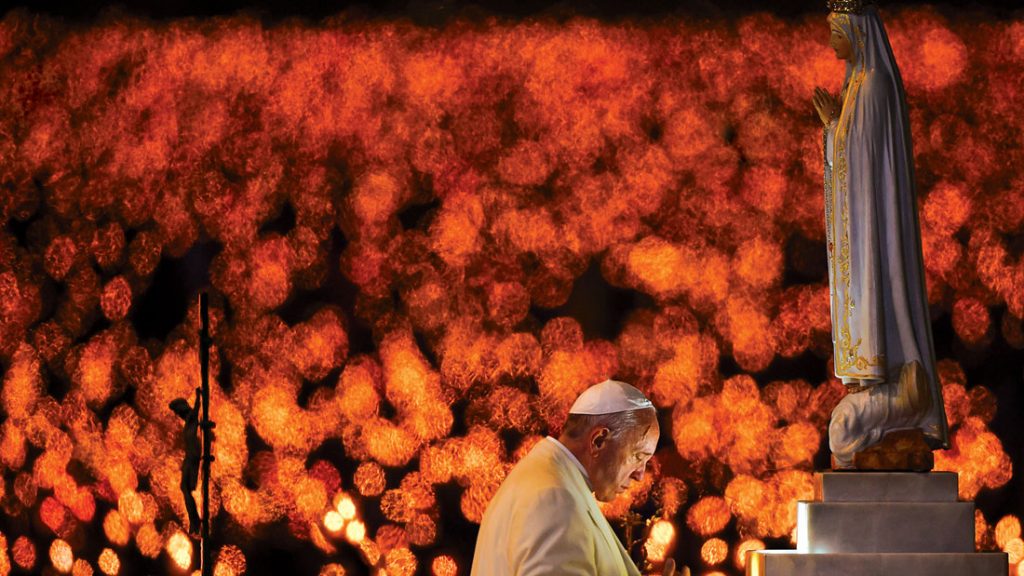 Francis pays homage to Our Lady of Fátima as millions join him in an eight-minute prayer in silence, the longest in the history of Pope visits to the Shrine.

Her death, in 2005, began her process of beatification, which was expected and is customary. She chose to live most of her life as a recluse, becoming a nun of the Order of Discalced Carmelites. She learned to read and penned the memories of Francisco and Jacinta, as well as the Three Parts of the Secret that Our Lady of Fátima had entrusted to her, and which have since been revealed. Francis, the Pope who came from the ends of the earth – born in Buenos Aires and is the first non-European Pope in over a thousand years, seems to have been handpicked for this mission.

A million pilgrims awaited Francis, who landed in Fátima in the middle of the afternoon on Friday, 12 May. On his way to the Shrine, accompanied by thousands of people, he was the Pope we all know and love: he shared smiles and hugs, played with the children, leaned his forehead against those who were there to see him, prayed, and celebrated mass in Portuguese, to the surprise of those at the Shrine used to Latin as the language of big celebrations. At the mass held on 13 May, prayers were also said in Italian, English, French, Polish and Arabic.

But the highlight of his visit to Portugal was a simple moment and, therefore, a resounding one. When he reached the Chapel of Apparitions, after offering a bouquet of flowers to the Virgin Mary, the Pope radically transformed the way the Vatican communicates: the eloquent Pope kept silent and prayed.

Francis’ prayer, which lasted approximately eight minutes – the longest prayer in the history of visits by Popes to the Shrine – saw one hundred years of doubt dispelled, without the need to say: “I believe”. In the eight minutes of silence all enquiries made of the three shepherd children were answered, poor children from a social background from which the Pope drew inspiration for his choice of name; he who was born Jorge Mario Bergoglio and evoked Francis of Assisi, he too a saint, the saint of the poor.

Fátima has become a global phenomenon, for the sheer number of pilgrims who visit the Shrine and who make it one of the most important Marian sites in the world, but mainly one of faith, which even atheists have a soft spot for. Because Fátima rose up from amongst the poor and not Roman Curia, just as Portuguese Cardinal D. Manuel Gonçalves Cerejeira understood: “It was not the Church that imposed Fátima, it was Fátima that imposed itself on the Church”.

One hundred years ago, a “Lady more brilliant than the sun” appeared to three children, in the middle of a field, in an obscure little town. When the plane carrying Pope Francis returned to Rome on 13 May, it began to rain again in Fátima. For 24 hours, the sun shone brightly. There were those who wrote of a “miracle” and for those who were present truer words were never spoken.

THE SECRETS OF FÁTIMA

During the apparitions – which occurred between May and October 1917 – Our Lady revealed a secret to the shepherd children, in three parts. The first two parts of the secret were revealed by Lúcia in two texts, in the 1940s. The first is a vision of Hell: “Our Lady showed us a great sea of fire which seemed to be under the earth. Plunged in this fire were demons and souls in human form, like transparent burning embers, all blackened or burnished bronze”, wrote the oldest of the three shepherd children.

The second part spoke of the World’s devotion – and the conversion of Russia – to the Immaculate Heart of Mary. “You have seen hell, where the souls of poor sinners go. To save them, God wishes to establish in the world devotion to my Immaculate Heart. If what I say to you is done, many souls will be saved and there will be peace”.

The third part of the secret was revealed by Cardinal Angelo Sodano, on 13 May 2000, during Pope John Paul II’s last visit to the Shrine of Cova da Iria, in Fátima. Lúcia told of the assassination attempt of a Pope – John Paul II, on 13 May 1981–, alluding to “it was a mother’s hand that guided the bullet’s path, and in his throes the Pope halted at the threshold of death”, but the main message from the third part of the Secret speaks to the fight against atheism.