Portuguese trade and eating habits over the last two centuries

In the 18th century Queen Mary was on the throne of Portugal and the festivities for her acclamation culminated in a magnificent banquet. The full menu is unknown, but the record of expenses reveals that meat was the predominant item on the table. 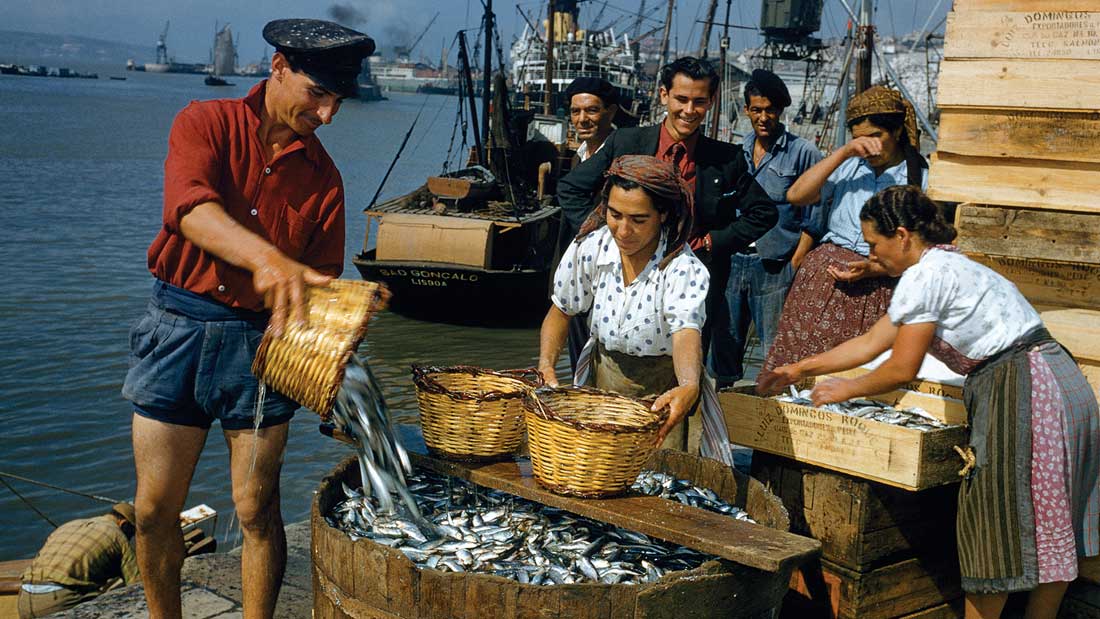 Fisherman unloading his night’s sardine catch to be sold in Lisbon’s markets, during the 50s. (© Volkmar K. Wentzel / Getty Images)

In the last quarter of the 18th century Queen Mary was on the throne of Portugal, and in the court, the festivities that took place on the 13th of May 1777, for her acclamation, culminated in a magnificent banquet. The full menu is unknown, but it is known that according to the record of expenses made by the royal larder, meat was the predominant item on the table. The purchase of 4 calves, 400 Kg of beef, 36 Kg of mutton and over 250 chickens and other birds was mentioned, to reveal only the most evident. The people, however, rarely ate meat.

Their diet, which was monotonous and of unvaried flavour, was based on bread and vegetables, seasoned with olive oil, lard or pork belly, in the form of vegetable soups, while in riverside and coastal areas, small fish were also eaten, such as grilled or fried horse mackerel and sardines, as the biggest and best fish went to the tables of the rich. Along with these small fish, cod caught in distant lands had been one of the favourite fish since the 16th century, as at that time it was considered to be a food of the poor.

And of course, there had to be wine… It was sold in stalls and taverns which were used as important places for the lower classes to socialise. That is where many took meagre meals and although they were of poor quality, because they were cheap and the majority of the poorer houses didn’t have kitchens, they resolved the daily problem of eating. The product sold the most was wine, but also brandy, whilst the titbits were there to accompany them and increase their consumption.

The 1572 Regimento dos Taberneiros (Taverners Regulations) had already established their conditions for buying meat and bread, showing a much wider supply of food than we could imagine. The taverns, along with the stalls, were also the points of sale of other food products, such as vegetables and others and the place to buy coal.

In 1792, one of the stalls in Lisbon, founded by the Galician Jerónimo Martins, would become a food store, and during the 19th century, would become famous for selling high quality products, not only food but also household utilities, including fashionable articles such as the Christofle brand. Due to its success, it was actually the only one to survive until today. Aimed at a slightly wealthier class, the eating houses and inns coexisted, and in the latter the food had to be of better quality, to the extent that there was a specific, strict legislation confirmed by the regulations of inn-keepers, included in the 1719 Regimento.

In these establishments, both in the taverns and the inns, it was possible to take home ready-made food, consuming only wine and bread on the premises. 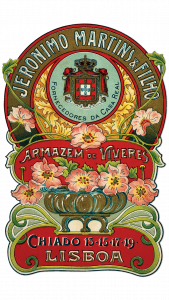 In 1792, one of the stalls in Lisbon, founded by Jerónimo Martins, became a food store. During the 19th century achieved success for selling high quality products, not only food but also household utilities. It was the only one to survive until today.

At that time is was also common to sell fried and grilled fish in the street, as well as dishes of mussels and ready-to-eat foods such as fava-rica (broad bean dish) and others, that the travelling salesmen provided as they moved quickly across the city.
As from the end of the 18th century bars and drinks stores began to appear, offering fashionable drinks such as coffee, tea, chocolate and various kinds of refreshments such as capilé (a herbal cordial), lemonade, or liqueurs, some of these establishments being favoured by the intellectuals of that time. However, the bars, as was the case with other stores at that time, had a wide variety for sale, and the advertisements published in the “Gazeta de Lisboa” announced that they also sold “snow”, poetic works and lottery tickets.

Equally, the drinks stores, such as Nicola in Rossio, advertised in 1810 the sale of every type of ice cream, as in Abondano the cup-bearer’s store, or in that of  António Marrare, in Cais do Sodré, which at the beginning of the 19th century advertised the sale of all kinds of ice cream. In the 18th century sweets were a favourite, and both in the court and in the homes of the aristocracy, the high point of the banquet was when the dessert was served.

However, they often used the service of confectioners, established already as a regulated profession at that time, and who were mostly concentrated in the central area of Lisbon. At the end of the 18th century there were many confectionery houses, some of which we can see in the “notices” (advertisements) in the Gazeta de Lisboa. As from the end of the 18th century, if we go by the advertisements set out in the same “Gazeta”, we can see that a profusion of “eating houses” appear.

The first piece of news we found refers to Casa de Pasto de Boulnois (1799), situated in Calçada da Estrela. We can tell what they used to eat in these establishments by looking at the 1811 advertisement of an Eating House, situated in Rua Nova do Carmo, no. 36, which offered a round table for the price of 600 réis, without wine, comprising two soups, stew, rice, two casseroles, two roasts, herbs (vegetables), two sweets and fruit of the season.

Some of these establishments also sold cow’s foot jelly, a delicacy preferably for the sick, which could be bought, for example, in José Gomes’ eating house in 1818, in Rua do Crucifixo, even during the fasting days, i.e. abstinence from meat. At the end of the century restaurants began to spring up, the oldest of which, Tavares, still exists today in the place where, in 1784, it was set up as a bar.

In the 19th century, inside middle-class homes, there began to be a trend for the dining room and the preparation of French-style dishes became fashionable at receptions, accompanied by menus written in that language. Female socialising was done mostly over tea and enabled friends to get together, presenting the best recipes for sweets and cakes in a delicate environment. However, the poorer classes continued to eat bread, pork, vegetables and small fish from the coast. Beef remained a privilege of the wealthier classes, while poultry was for the sick and only eaten on festive occasions. 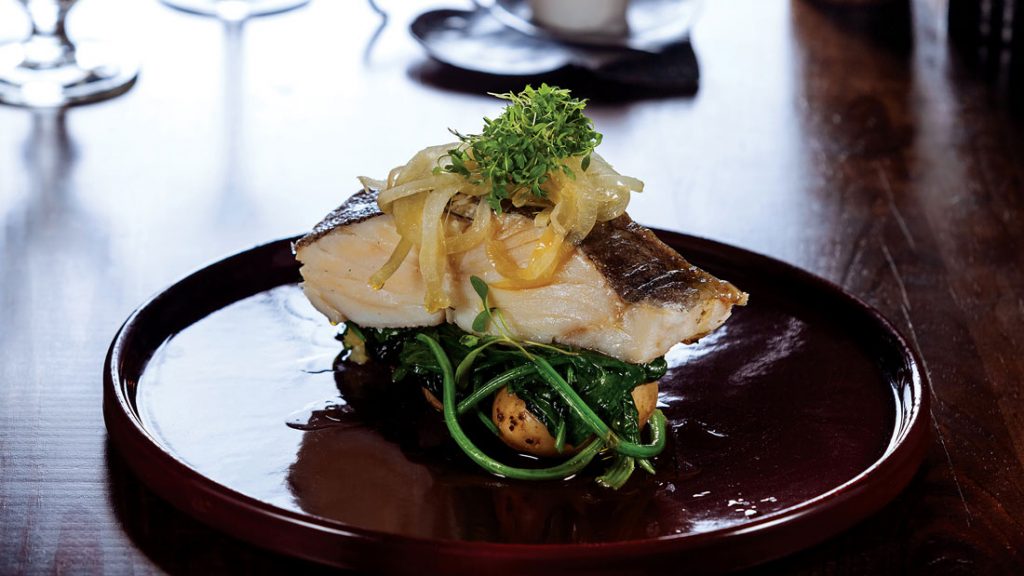 Once considered the food of the poor people, one of the typical Portuguese dishes – codfish – is now a delicacy in expensive restaurants.

In the middle of the 20th century, the rural population began an exodus to the cities of Lisbon and Porto, trying to improve their quality of life and occupying positions in trade and industry. There, the working classes used pots to transport home-made food usually soup, rice and pasta, with a small amount of meat or fish.

Wine was a complement and coffee their little luxury. Housewives who had knowledge of domestic science performed miracles to make food from leftovers. The food eaten was based on local, seasonal products. It was already in the last quarter of the 20th century that little by little the first signs of what we now call globalisation appeared, with the arrival of exotic fruit/produce. In Lisbon, restaurants serving foreign food began to open, the first ones with Chinese food during the 1970s, following by Indian restaurants in the 1990s. In 1991, the first McDonald’s fast food restaurant opened in Cascais.

Traditional shops selling food were faced with the inevitable competition of the large retails stores. The first Pão de Açúcar store opened in Lisbon, in Avenida Estados Unidos da América, on 1st May 1970, in the place where presently exists a Pingo Doce store, belonging to the Jerónimo Martins Group. On the 1st of November 1970, the second store would open in Lisbon, this time in Alcântara, in Avenida de Ceuta. Later the hypermarkets would arrive.

In the last few decades there has been increase in agricultural productivity, a greater variety of food and the end of dependence on their seasonality, thanks to refrigeration techniques and others. Food became more easily accessible and cheaper which linked to the improvement in the quality of life, led to radical changes in eating habits. As such, over the last centuries, eating habits have undergone profound changes, as a result of agricultural development, kitchen technology and the facility provided by means of transport, leading to the appearance of products in small markets and proximity stores.

Emigration and new medical concepts, transformed into eating trends, were responsible for the other changes. In just two centuries both eating habits and trading in food have seen the biggest and fastest transformation humanity has ever known.

Eating through the Ages
The family behind Jerónimo Martins
The Ageing Challenge in Portugal and Europe
225 years of Polish food history
Colombian Cuisine in the past, present and future