Co-Founder and President of the Polish Chamber of Commerce 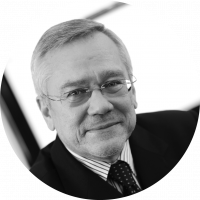 In 1992 he was the Minister for Foreign Economic Cooperation. Awarded with many national and foreign orders, including among others the Commander’s and Knight’s Cross of the Order of Polonia Restituta and the Order of Smile.