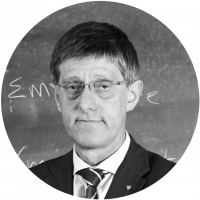 Professor of the Department of Computer Science and Engineering of Instituto Superior Técnico (IST), Arlindo Oliveira is also President of this portuguese institute and member of its Executive Board. He obtained an MSc degree from IST in 1989, and a PhD degree from the University of California at Berkeley in 1994, both in Electrical Engineering and Computer Science. Arlindo Oliveira authored more than 100 scientific articles and papers in conferences, and three books, including “The Digital Mind” (2017).