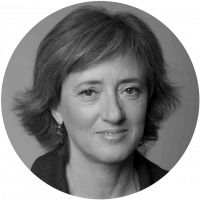 Cândida Pinto is a reporter living and working in Lisbon. She started her career on the radio, and later moved to television through RTP, the public TV network. In the early 90’s, she founded the first Portuguese private TV – SIC –, where she was also International news editor and a coordinator for the Special Report show. She was director of SIC Notícias, the SIC news cable channel, and Assistant Director of Expresso weekly newspaper. She received several national and international awards. In 2019, back in RTP, she became Assistant Director of Information.