23 Dec Love at the first bite: A case of Pizza

Love at the first bite: A case of Pizza

Born and raised in Italy, pizza crossed the Atlantic and was taken around the globe. It was a humble food before reaching royal households. It belonged to a nation and today belongs to everyone. This is its story, served in bites. 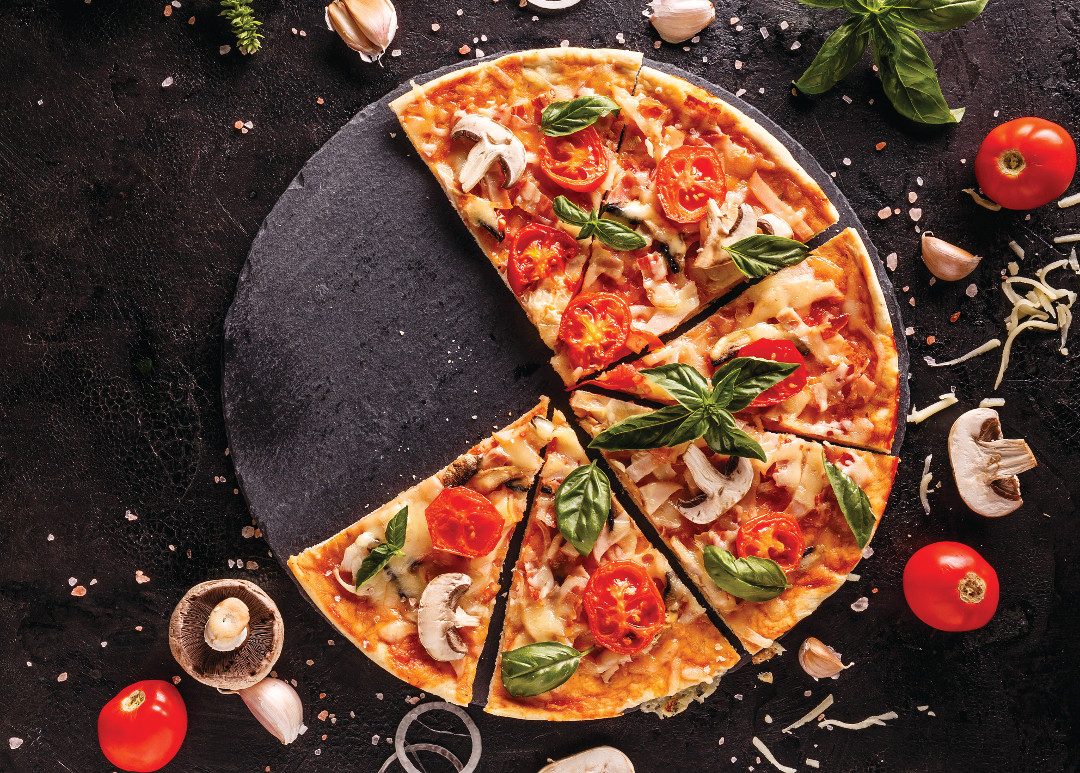 A Slice of History

“The only thing I would like is to go out one day, without being recognised, and go to a pizzeria for a pizza.” In 2015, His Holiness, Pope Francis, made this confession to the Vatican Radio, demonstrating the inescapable seduction of an oven-baked dish created over two millennia ago, elevating it to sacred status. Or just about. Both Italians and Greeks continue to lay claim to the invention in a tasty discussion sprinkled with multiple theories about the origin of the word “pizza”. And, if there is an extra seat at the table, it would belong to Germany.

Let’s start with the base. The 1907 edition of Vocabolario Etimologico della Lingua Italiana states that the word is derived from the dialectal “pinza” (from the Latin pinsere, which means “to pound”, “stamp”). Other theories suggest that the word comes from the medieval Greek “pitta” (“cake”, “pie”) or the Old High German (500-1050) “bizzo” or “pizzo” (“bite”, “morsel”).

In literature, the first references to pizza appear in Classical Antiquity. The Aeneid, written by Virgilio (19 BC), speaks of the tradition of putting ingredients on flatbread. Surprisingly though, at the time, it was only used as a plate. However, when famished, nothing was wasted, as described in the passage below: “Shortly after arriving in Latium, Aeneas and his crew sat down beneath a tree and laid out ‘thin wheaten cakes as platters for their meal’. They then scattered them with mushrooms and herbs they had found in the woods and guzzled them down, crust and all, prompting Aeneas’ son Ascanius to exclaim: ‘Look! We’ve even eaten our plates!’”

The plate was first referred to by the name “pizza” in an official document in 997. The document, a lease agreement for a mill, is kept at the notarial archive of Gaete, a small town in the region of Lazio, in central Italy. It stipulated that the feudal landlord had to give 12 pizzas, among other foodstuffs, to the local Bishop every Christmas. The second officially documented reference to the word pizza appeared in 1570, when the personal cook to Pope Pius V published The Opera Of Bartolomeo Scappi – L’arte et prudenza d’un maestro cuoco (The Art and Craft of a Master Cook).

Scappi introduces pizza as a sweet dish (which helps to explain today’s chocolate pizza craze), in a recipe that uses almonds, pine nuts, dates, figs and raisins as the main ingredients, which are crushed to obtain a paste. For the base, egg yolks, sugar, cinnamon and grape must are mixed with… rose water.

FROM POVERTY TO ROYALTY

A few more centuries passed before pizza as we know it today took form. This brings us to Naples, where the art of the Neapolitan ‘Pizzaiuolo’ was classified by UNESCO as Intangible Culture Heritage. Under the House of Bourbon (1734-1860), Naples was one of the largest cities in Europe and its economy was growing, fuelled by agriculture and trade. However, 15 % of the 340 thousand inhabitants were living in extreme poverty. They were messengers and casual labourers, known as lazzaroni, because they resembled Lazarus.

At the time, street vendors would sell pizza, which they carried in large boxes under their arms, to these folk as a staple meal. Alexandre Dumas, who visited Naples in 1835, wrote in Le Corricolo (1843): “The Neapolitan of the lower class [known as lazzarone (lazzaroni, plural) or lazzaro (lazzari, plural), a peculiarly poor class of the Neapolitan society] is not wretched; for his necessities are in exact harmony with his desires.

What does he wish to eat? A pizza [implying that pizza is a humble food] or a slice of watermelon suffices.” And what was it made of?: “The pizza is a sort of bun (…) it is round, and made of the same dough as bread. (…) The pizza is prepared with bacon, with lard, with cheese, with tomatoes, with [petits, “small”] fish.” In the same chapter, the French writer refers to pizza as “the gastronomic thermometer of the market”, because its price varied depending on the day’s catch.

WHY DO WE LOVE PIZZA SO MUCH?

The crispiness of the crust. The chewiness of the cheese. The moistness of the sauce. The Holy Trinity comes as symphony of flavours, whose notes merge together to disappear in our mouth, please the amygdala and feed the brain. But first, the smell. The scent a pizza in the oven spreads clings to people, inebriating them, making them hungry, calling the other senses for a singular experience. More than an affair, perhaps, it is a survival mechanism. Gail Vance Civille, founder and president of Sensory Spectrum, explains: “The fat gives you satiety, the sugar in the bread and the sauce is satisfying, and the salt is going to keep you alive.” Besides, it is a community coming together type of food, and no other food replicates it like that. Where there is pizza, there is surely is a party.

The contempt for pizza was such that the dish continued to be omitted from cook books, published in the second half of the 19th century, which, curiously, was when the first pizzerias appeared. However, all this would change after the Italian unification. It would finally see glory when King Umberto I and Queen Margherita of Savoy visited Naples in 1889. Summoned to prepare local specialities for the Queen, Raffaele Esposito, chef from Pizzeria di Pietro e Basta Così (founded in 1780 and today known as Pizzeria Brandi) prepared three different types of pizza. Relishing all of them, she particularly liked the three-coloured pizza with tomatoes, mozzarella and basil. Esposito christened it the “Margherita” in honour of the queen. Since then, the Margherita has become the queen of pizza.

BORN AND RAISED IN ITALY, GROWN IN AMERICA

After glory, came the recognition of pizza as a national dish. In the 1930s an increasing number of Neapolitans migrated north, taking the recipe with them. During the second world war, the Allied soldiers who invaded Italy discovered pizza. But it was in the post-war period that pizza became really famous, thanks to the boom in tourism. With the wave of migrating Neapolitans to the east coast of the United States, pizza found its second home. In 1905, the first pizzeria opened its doors in New York – Lombardi’s. From then on, nothing could stop it: it was love at first bite.

In the 1950s, Dean Martin celebrated pizza by singing “When a moon hits your eye like a big pizza pie… that’s Amore”. In the 1960s, frozen pizza took the market by storm and then came pizza delivery, in the following decade. Contrary to globalisation, the formula changed, leading to the creation of countless versions and, to the dismay of purists, in 1962, in Canada, the most controversial ingredient in pizza history was added: pineapple. But arguing about personal taste is pointless. What matters is savouring the taste and experience of such a privileged menu. Just take Pope Francis’ word for it.

The International Pizza Day is celebrated on June 10 while World “Pizzaiolo” Day falls on January 17.

The art of the Neapolitan “Pizzaiolo” was inscribed in UNESCO’s representative list of Intangible Cultural Heritage in 2017.

2017 NASA astronauts threw a pizza party on the International Space Station, serving up pizzas they made themselves.

Norway is the country with the largest pizza consumption per capita: 11 pizzas per person, per year.

Thyme in a Good Loop
Tasting homemade in every bite
The Sweet Taste of Colombian Cycling
Egan Bernal: A Condor at the top of the World
Good habits… start young!