Xico Gaivota took us to the Mãe d’Água Reservoir, in Lisbon, to “Rethink” our attitude towards the plastic scourge. The exhibition challenged the visitors to find solutions for turning the tide on ocean pollution. 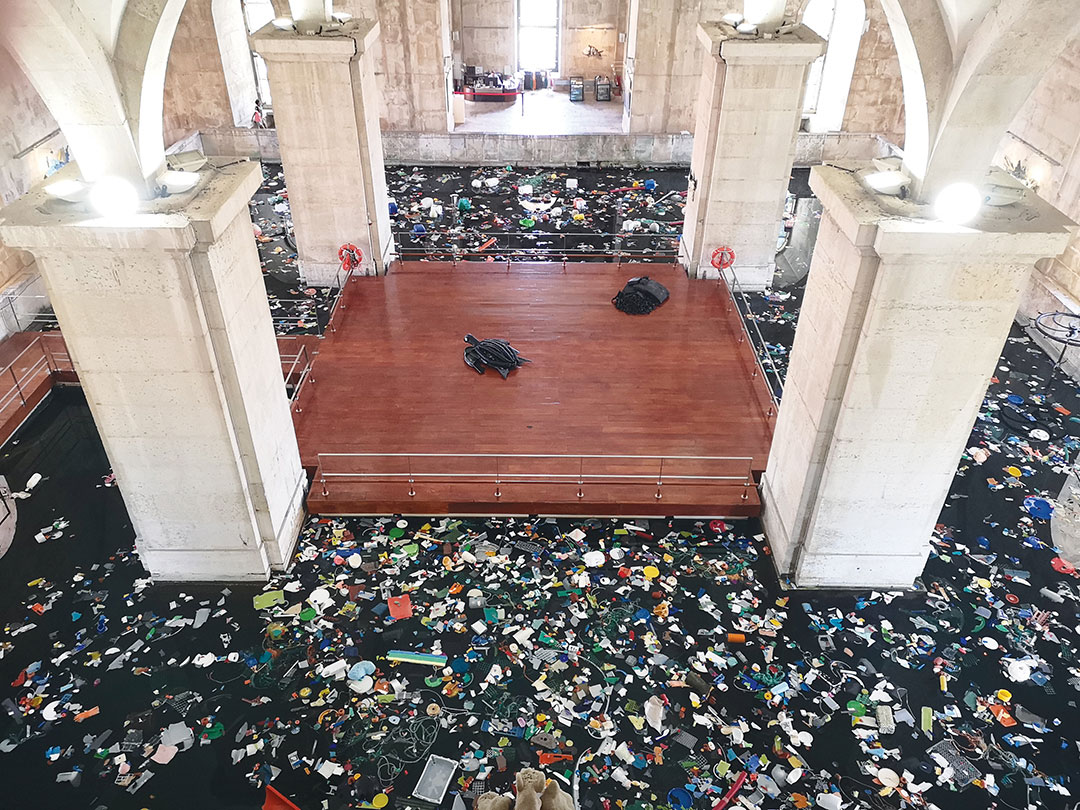 An orange fish floats adrift. Its big, convex eyes stare into nothingness with a certain sadness. Around it, gasoline containers, shoe soles, balls, vacuum cleaners’ ducts, hundreds of broken pieces of plastic spewed back by the sea: “It’s not litter. It’s my raw material”, recalls Xico Gaivota. In this mesmerising “calyx” of water, transparency is a mirror for the sacredness of the eighteen-century museum bathed in light whose interior resembles one of a hall church. The Mãe d’Água Reservoir, in Lisbon, is the place to “Rethink” one’s attitude towards scourge. From this vat, four columns rise that support a vaulted cupola ceiling which in turns supports the magnificent terrace overlooking the city.

16 bags of one cubic metre each, totalling more than a tonne, fill the 7.5m-deep deposit to mimic the reality of an Ocean crying for help. At first, the idea was to have his animals hanging from the walls. However, when the artist saw the reservoir, this visual metaphor surfaced all of a sudden: “I asked the organisation if I could put plastics inside the water, they said yes, and then I took a van fully loaded. But, to accomplish my intention, I would have to wash the pieces. That was against my principles, since I never manipulate the objects”, he laughs. The purpose led him to make an exception: “I did so, I washed them.”

The plastic used in “Rethink” is the result of two years combing for materials in beaches with no commercial exploration, sometimes hard to access. Deconstructing the stories beneath them and sharing the mission they carry has been, for the activist, not only a privilege but also a duty, especially when it comes to children: “I’ve been in many schools and now I received kids from school trips, and I feel that I have great power over them, that they can feel somehow inspired by my experience.” During three months, the exhibition challenged the visitors to find solutions that could turn the tide on ocean pollution. “It is not that we don’t have them, but they are not well-addressed”, he argues.

“Tying a bag is not enough. What is being done to our trash? Which percentage is being recycled?”, Xico Gaivota insists. “We need to press the competent authorities, because we, I mean, consumers, are just a part of the whole problem.” When the show came to an end, Xico Gaivota got surprised by the impressions people had left in this book of signatures: “Most of them felt it was a kick in the teeth, that they had to do something regarding their daily choices.”

The pieces returned to their boxes: “I needed my trash back (laughs). I needed to go back to my roots, to sit again alone and make new artwork. It has been intense. And it takes me long to create.” Taking the pieces as they are, respecting their shapes and colours, is a bigger dare: “It means that there are more limits, which makes this art more interesting and defying. No material had ever got me more captivated than plastic.” He gives back to it by stealing from our eyes what must be kept invisible: “My work is essentially what you don’t see.”