Coveted for their colour, size and transparency, Colombian emeralds attract buyers from all over the world. When was the “green spell” born? This is the history behind the legendary precious stone’s success. 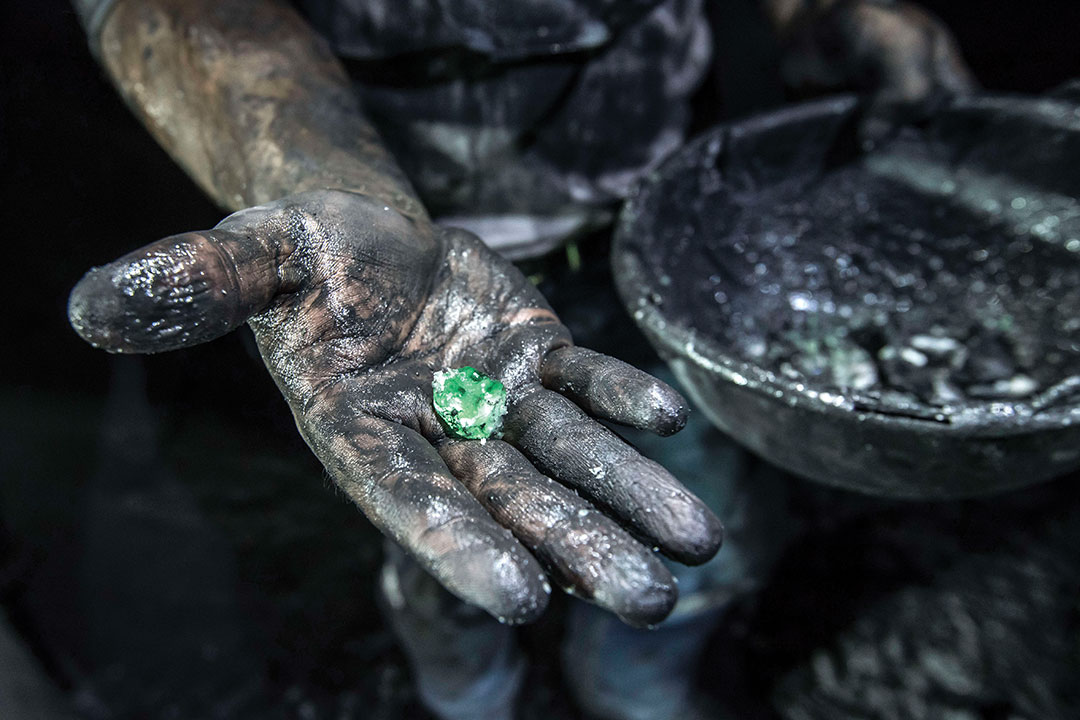 Sixty-six million years ago, in an enchanted place, earth and water combined in an unrivalled alchemy to crystallize in a legendary precious stone. Colombian emeralds are unique, not just in their exceptional beauty and luminosity, but also in the process of their formation, different from emeralds in other regions of the world. Today we know that saline fluids were released as a result of tectonic movements and flowed along the geological faults, bringing them into contact with evaporites, sedimentary rocks comprising more than 50 % salts deposited by evaporation. This mineralised into the green magician “embrujo verde”, in Spanish. In other countries, such as Nigeria, emeralds formed from the interaction between magmatic fluids and intrusive rocks, formed from the slow cooling of magma.

In the region which is today Colombia, the Muiscas were the pre-Hispanic society which knew the most about emeralds. Between 400 and 1600 A.D., these tribes lived in the modern administrative districts of Cundinamarca and Boyacá, in the central Andes, and the largest concentration of these peoples was in the plateaux around Bogotá. This was the region with the richest emerald reserves, of which only 1% are said to have been mined. It is doubtful whether the Muiscas were aware of the true scale of the treasure beneath their feet.

Like other indigenous peoples in South America, they believed that life was divided into three dimensions, the overworld, the underworld and the world. Mankind was in the last of these. The underworld, a place of rebirth, was green and, for the Muiscas, this was the colour of fertility and of the power of their own existence. In those times, when they bore their way into the bowels of the earth, they believed nature could not simply give them the treasures that had taken millennia to form without asking anything in return. So, these people used offerings as a way of giving back and restoring the balance disturbed by the gift.

Emeralds were one of the many objects deposited during the rituals of birth, marriage, death and many others, in sacred places: lagoons, caves, rocks, fields, mountain tops and temples known as “cucas”. The festivities included communal feasting, singing and dancing. It is also known that other cultures, such as the Calima, what is today Valle de Cauca, the Zenú, from Córdoba, and Tumaco-La Tolita, from the Pacific, used emeralds to fashion jewels and adornments that they offered to their gods and used to venerate their chiefs. They learned to cut and work the stones in order to place them in gold chains, for example. Given that none of these tribes travelled anywhere near a deposit, archaeologists and anthropologists have concluded that the stones were also used as a form of currency.

When, in the 16th century, the Spanish reached the Cundiboyacense plateau, in the Eastern chain of the Andes, they found a populous region, where the society had a clear hierarchy, living in villages scattered on the mountainsides and valleys. Also organised into cacicazgos, the Muiscas farmed corn, potatoes and other tubers, allowing them to support their priests (“jeques”) and goldsmiths. This self-sufficient economy was also based on production of ceramics, jewellery and textiles, as well as salt and emerald mining. Served by an extensive mercantile network, this civilisation traded these products for cotton, gold, feathers, beeswax, honey and tropical fruit. 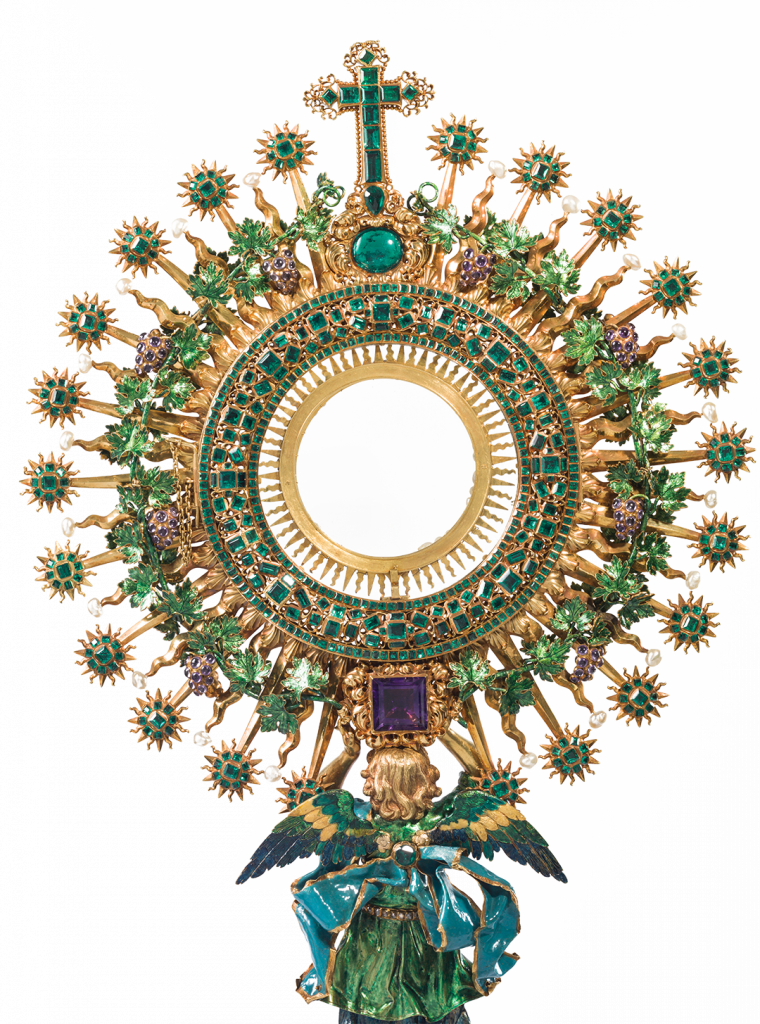 Known as “La Lechuga” due to the intense green generated by 1,486 emeralds, the Monstrance from the Church of Saint Ignatius of Bogotá is considered a baroque jewel of Colombian art and was exhibited in Portugal in 2017.

Led by Gonzalo Jiménez de Quesada (Granada or Cordoba, Spain, 1509 –Mariquita, Tolima, Spanish Empire, 16 February 1579), the colonising troops encountered the precious stones on their quest for El Dorado, the mythical city of gold lost in the South American jungle that haunted the imagination of conquerors and adventurers for close to five hundred years. The Spanish Empire used the emeralds, like the gold, as a means of financing their expeditions. The indigenous peoples were reduced to labourers for the Crown, which enslaved them and forced them from their homes to work in the mines. In just 50 years, the native population was reduced to 35% of its original numbers. It is believed that, a few years before his death, Jiménez de Quesada corresponded with the Spanish monarch, Felipe II. In one of these letters, he appears to have asked the king to hand over the operation of the emerald mines exclusively to the native peoples.

In order to show what they were capable of doing, he told him that they only mined the stones in winter, as the rain sent channels of water that washed the soil and helped to uncover the seams of emeralds. In a book entitled “Epítome de la conquista del Nuevo Reino de Granada” (1889), by an unknown author and attributed to the Spanish conquistador and founder of Bogotá, we find a clearer idea of why “no one else knew how to mine the emeralds”: “They partake of certain herbs with which they say they know which veins have the largest and most beautiful stones. Indians from anywhere else, such as those from outside the fiefdom of Somindoco, who is the chieftain and lord of the mines, cannot go there in search of emeralds nor do they venture to look upon the mines, because they will die within one moon, in a month or thirty days.”

In the past, the unexplained origin of emeralds incited the human imagination to find legends to explain this wonder and countless numbers of these are today part of our universal mythology. One of them, the Fura-Tena legend, also explains the beginnings of mankind. The god Are, who governed the destinies of the Earth, decided to create a species to inhabit it. From the banks of a mighty river, he took two long reeds and, with his divine breath, transformed them into a man (Tena) and a woman (Fura). They would always be happy and never know pain or death, but on one condition: that they were faithful to each other. One day, a fair youth called Zerbi asked Fura to help him to find a famous green stone. She agreed, but they searched several days in vain. Fura then fell in love with Zerbi, and betrayed Tena.

The legend of Fura and Tena was created to explain the origin of the Colombian emeralds.

On an impulse, Tena decided to end his life, ripping his chest open to the horror of the repentant Fura. On the wishes of Are, precious sun-kissed emeralds grew from her tears. In the Colombian municipalities of San Pablo de Borbur, Pauna and Muzo, in the district of Boyacá, we may find two hills named after the main characters in this legend. Fura and Tena, once a place of worship for the Muzo Indians believed to be the seat of their gods and used as sacrificial alters, rise up from the landscape to heights of 840 and 500 metres. The calm waters of the river Minero Guaquimay flow with sudden fury into a narrow and deep gorge between the two hills. As in the legend. The names of Fura and Tena were also given to the largest known Colombian emeralds, presented to the public in 2011, 12 years after they were found, side by side, in a mine in Muzo. Fura weighs 2.2 kilogrammes and has 11 thousand carats, and Tena 400 grammes and 2 thousand carats. Only 11 people have had the privilege of seeing the two precious stones at Minergemas, the mining and precious stones and minerals fair in Bogotá.

Coveted for their colour, size and transparency, Colombian emeralds attract buyers from all over the world, with China, Thailand and India as the main export destinations. In 2018, Colombia established itself as the leader in the “green war”, beating its main competitors, Brazil and Zambia, with a turnover of more than 142 million dollars (despite its output trailing in only third place). The bulk of this business relates to exports of cut emeralds (249,788 units, with a value of 122 million dollars), followed by uncut stone (at 19 million), according to the Colombian emerald sector association (Fedesmeraldas).

The department of Boyacá accounts for 99% of the country’s output, with 1,332 mining licenses, headed by the municipalities of Maripí, San Pablo de Borbur and Muzo. The industry generates direct employment for 3,000 workers and indirect employment for a further 12 million. These figures have allowed the sector to invest in social projects in their local areas. As a result, Fedesmeraldas, in partnership with a series of public and private bodies, committed itself to investing around 11 million pesos (3.5 million dollars) in building a hospital in the municipality of Muzo. The building work is set to start at the end of 2019. This is the beginning of a new era in the history of a major national symbol.