18 Jun Sounds from the Deep

Sounds from the Deep

There are universes that transcend the senses, inhabited by sounds beyond the range of normal hearing. Deep habitats where sound waves take on a vital role in the communication and survival of some species in the animal kingdom. 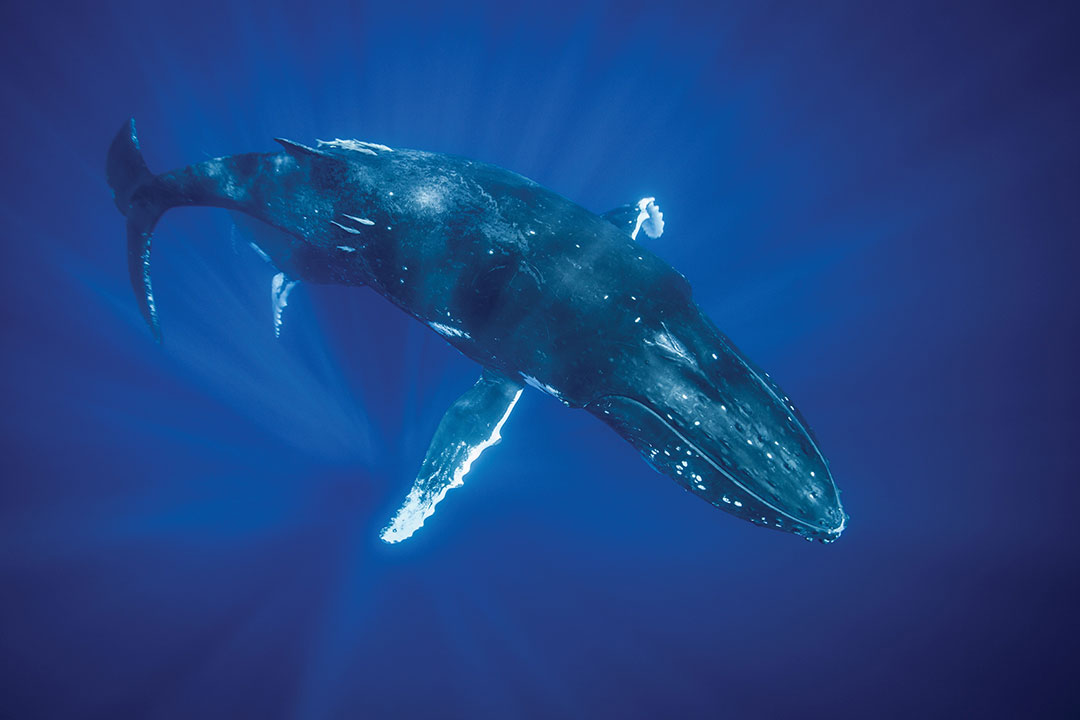 Our mapping of the world is limited to the capacity of the senses and, in terms of hearing, human sensorial perception is completely ineffective for detecting the entire spectrum of sounds on the planet. There is a whole universe of deeper sounds that are beyond the scope of the human ear, equipped to detect frequencies between 20 Hz (more low-pitched) and 20 kHz (more high-pitched). This means that infrasound, all low frequencies below 20 Hz, and ultrasound, above 20 kHz, remain inaccessible to the human ear. But it is our very nature that drives us to find solutions so that we can closely study the habitat we live in.

We now know that the amplitude of sound waves is much greater than what we can hear, because we were capable of developing sensitive technology to detect it. This gave us the ability to listen more carefully to the nature that surrounds us and has allowed us to narrow the border that separates us from inaudible sounds. Some echo very closely, on the surface, but still at an unattainable frequency, while others echo in the depths of the earth and of the ocean. 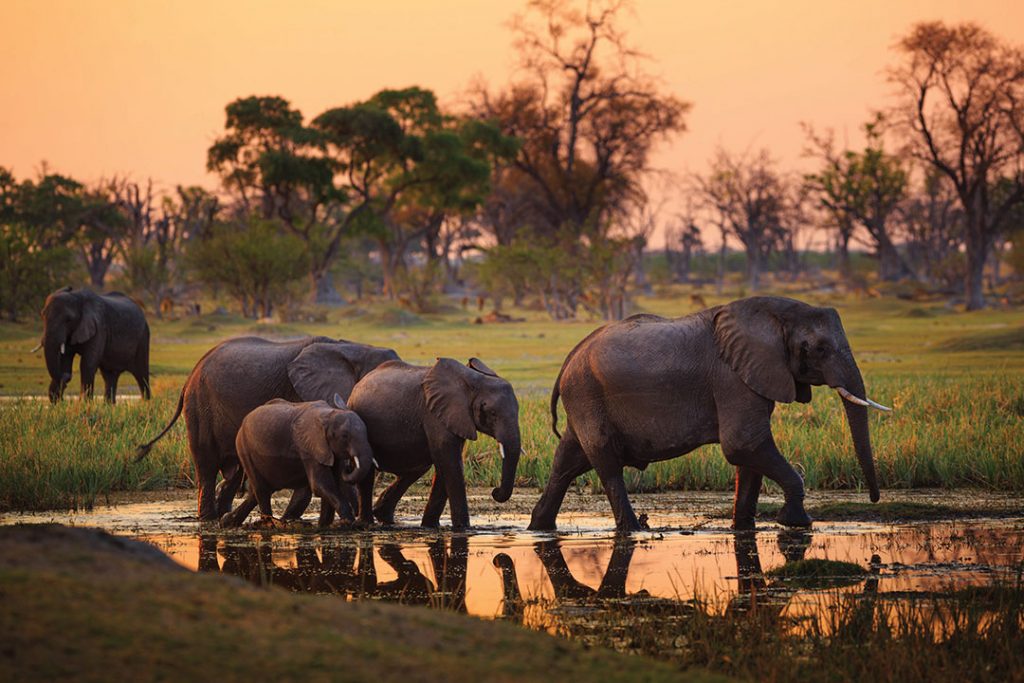 Elephants use infrasound with a scope of two kilometres to communicate over long distances.

DEEP SOUNDS ON THE SURFACE

At first glance, nobody would say that the largest land mammal, whose trumpeting is clearly audible, uses infrasound with a scope of two kilometres to communicate over long distances. But these waves below the audible spectrum are a privileged communications channel, not only for elephants – which can pick them up through their feet – but for many species in the animal kingdom, particularly mammals.

Researchers believe that some of the most fearsome predators use infrasound to paralyse their prey. This is the case of the roar of tigers, experienced a little too closely by Mel Sunquist, a professor in the Department of Wildlife Ecology and Conservation at the University of Florida, and his wife, Fiona Sunquist, authors of books such as Wild Cats of the World. They survived the scare, but their memory of how they felt paralysed will stay with them forever: “It feels like the sound is actually penetrating you. It’s so forceful. My wife said she felt like she couldn’t move. She felt like she was sort of frozen.” 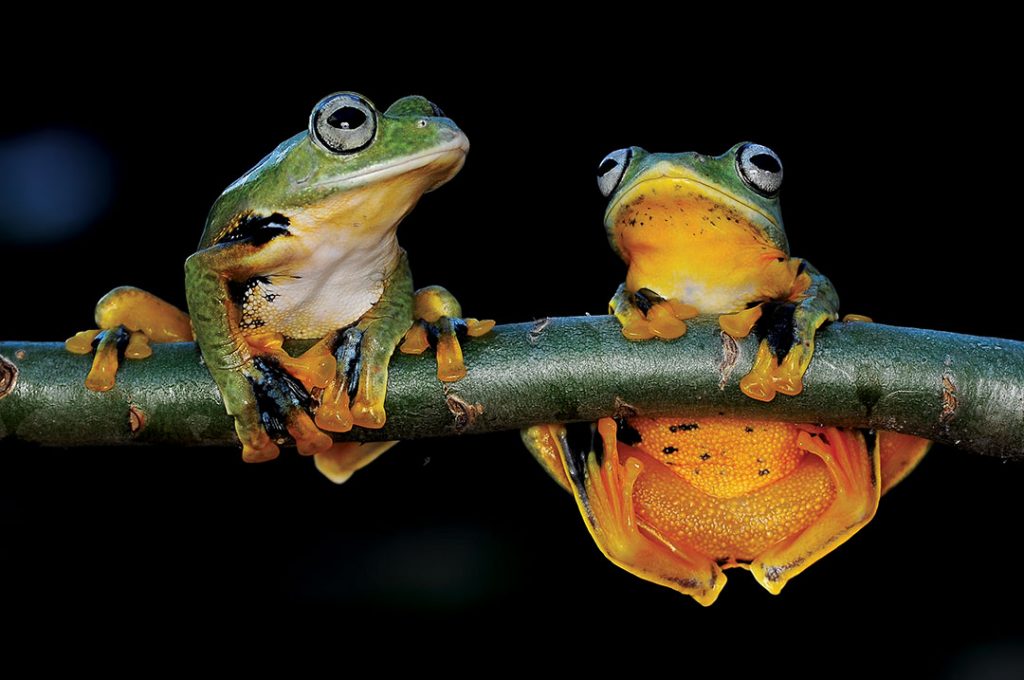 Ultrasound, on the other hand, can be used for baby rodents and kittens to communicate with their mothers and avoid predators. However, the first non-mammal species on record for using frequencies above 20 kHz is the Amolops Tormotus frog. This amphibian, whose ears sit at the edge of its face, has visible ear canals that lead to a sunken eardrum within the skull, allowing the ultrasounds transmission. This is how they hear over the sound of the waterfalls where they live, in the Huangshan Mountains in Eastern China.

“Nature has a way of evolving mechanisms to facilitate communication in very adverse situations”, says Albert Feng, in charge of the research into this discovery published in Nature magazine. The professor at the University of Illinois in the USA, a reputed neuroscientist specialising in hearing who studies frogs and bats explains that “one of the ways is to shift the frequencies beyond the spectrum of background noise. Mammals such as bats, whales and dolphins do this, and use ultrasound for their sonar system and communication. Frogs were never taken into consideration for being able to do this.”

The echolocation or biosonar system is an innate biological ability which is particularly crucial to the survival of some mammals. The emission of ultrasound waves – in the air or in the sea – makes it possible to detect the position of and the distance to obstacles, analysing the time between the moment when they are emitted until they come back in the form of a reflected echo. In other words, the faster the sound comes back, the closer the obstacle is.

It is this ability that allows bats to fly at night, compensating for their poor night vision. It is also very useful for them to catch their prey. The ultrasound produced by dolphins and whales, a mixture of clicks and whistles, serves not only for these cetaceans to communicate with each other, but also for navigating murky waters and finding food. 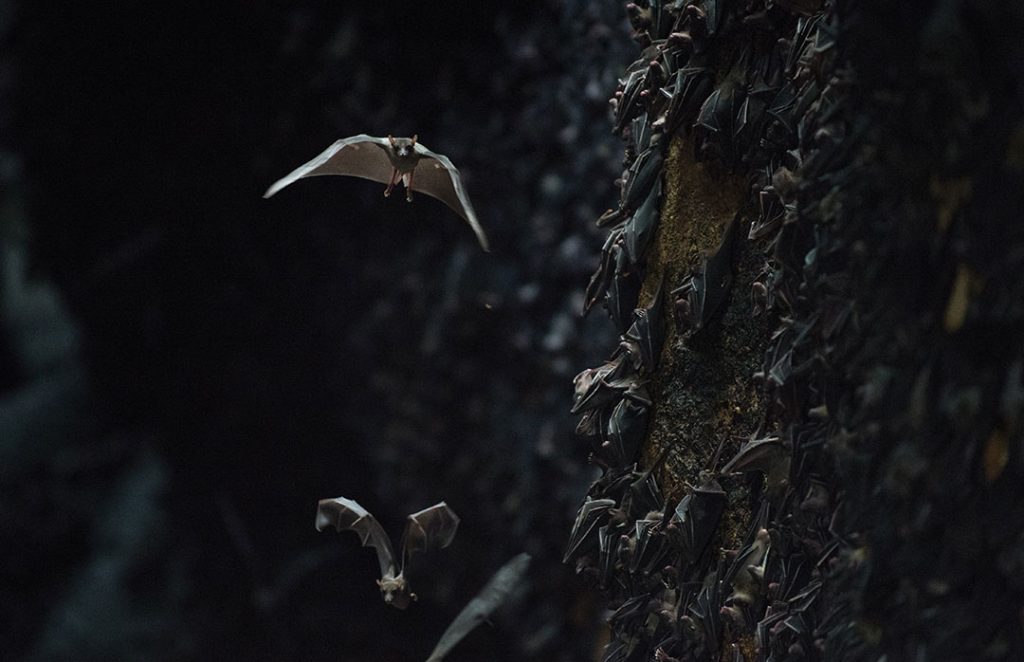 Echolocation allows bats to detect obstacles in flight, find their way into roosts and forage for food.

SOUNDS FROM THE DEPTHS

In deep muddy burrows in the ocean, Mantis Shrimps (stomatopods) have a communication method that uses very low frequency sounds, between 0.02 and 0.06 kHz – called rumbles – which they use when interacting with potential predators. Apparently, the sound is emanated through the vibration of muscles on the shell which, at a certain point, becomes bright pink in colour. This characteristic seems to indicate that the species has a very complex system of interactions. 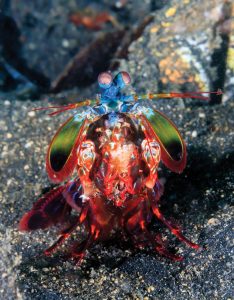 THE MOST QUIET PLACE ON EARTH: DEEP SILENCE

It is the deepest possible silence one can experience. Anyone who has ever tried it says that diving into this absence of noise is profoundly intriguing. The sound of silence. A sensation only possible in anechoic chambers, rooms designed to complete absorb both noise and electromagnetic waves. There are no echoes in there and, as soon as someone speaks, all sounds are absorbed. That is something human beings, who didn’t evolve in a world of silence, just can’t stand for too long. The Instituto Superior Técnico in Portugal has one of these chambers. It is lined with foam wedges to cut off frequencies of 80 Hz and is used for acoustic trials in the wind tunnel at the Institute’s Aerospace Laboratory.

The truth is that after 45 minutes most people begin to feel ill and disorientated, not so much because of the absolute lack of reverberation, but because all the senses become sharper: breathing, scratching, swallowing or even the heartbeat are sounds that take on an unexpected intensity in this controlled environment. By comparison, one of the quietest sounds that can be heard in a quiet room clocks in at 10dB. Therefore, this surely is the quietest place on Earth. 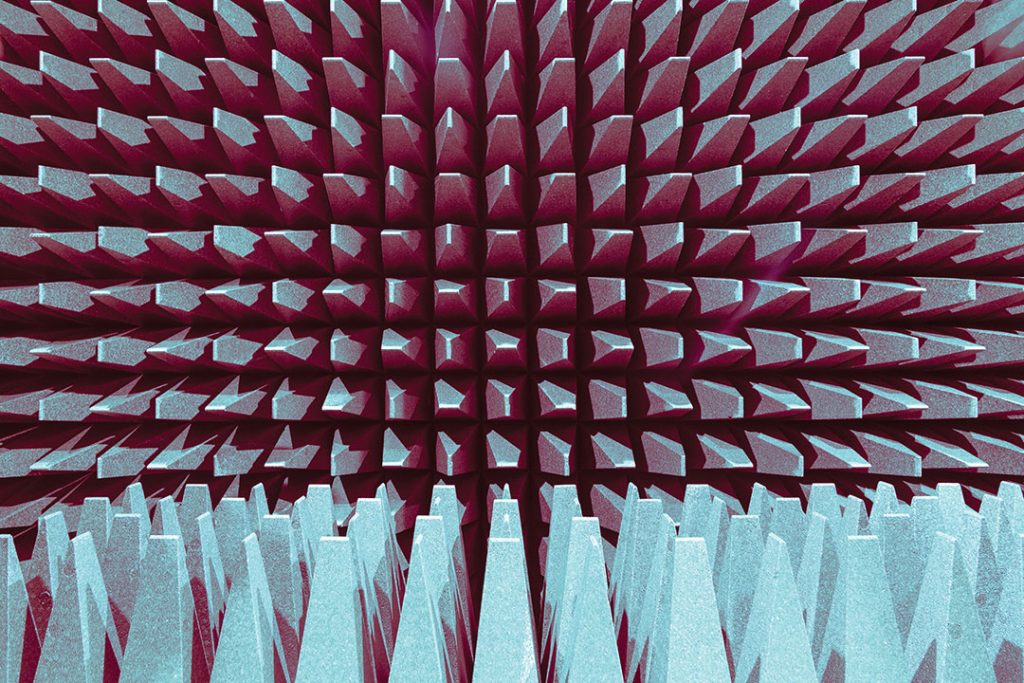 An anechoic chamber is a room designed to completely absorb reflections of either sound or electromagnetic waves.