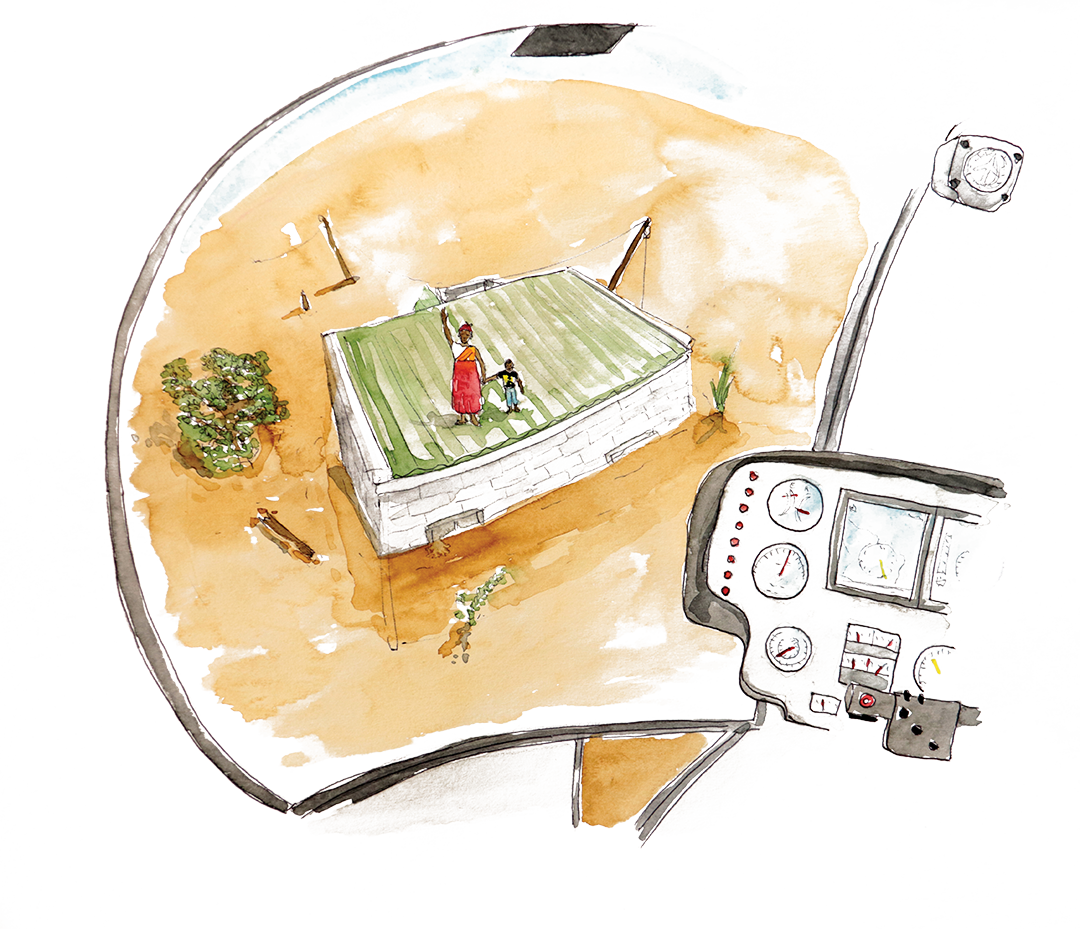 On the evening of March 14, 2019, the news of Cyclone Idai’s path of destruction through the city of Beira shocked the world. An estimated 1.5 million people are thought to have been affected by the storm that also hit Malawi and Zimbabwe. Winds exceeding 170 km/h, heavy rains and floods swallowed cities, towns, villages, roads and fields, leaving a trail of destruction spanning 128 km in length and 72 km wide. 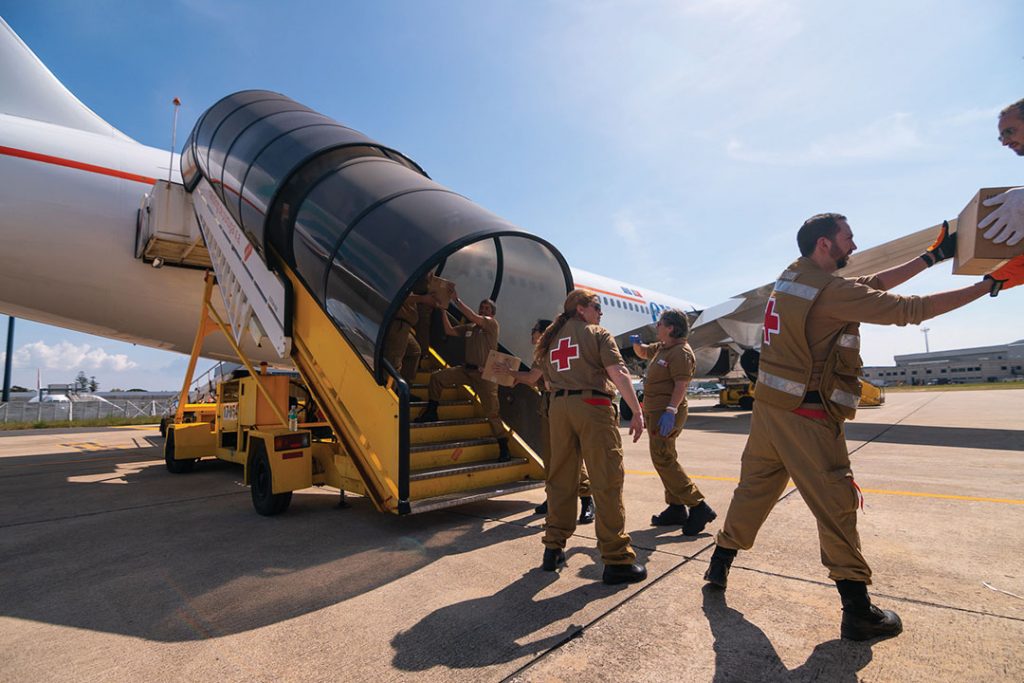 The Portuguese Red Cross launched an operation to provide aid for those in need in Mozambique.

Nearly 100 thousand homes were destroyed and just as many severely damaged. The official death toll two months later stood at 602, with 1,640 people injured. Portugal, in particular, could not just stand idly by in the face of the worst disaster to hit south-east Africa in recent decades. Five hundred and twenty-one years of shared history, which began when Vasco da Gama made landfall on this brother country, two months before reaching India.

Two nations which, almost 45 years after Mozambique’s independence, still have strong diplomatic, political, economic and social ties. And who share the same language. For these reason, and if aid from the international community was seen as an act of solidarity, to Portuguese society, providing aid immediately and in any way possible was the most natural thing to do.

This sense of responsibility was shared by several Portuguese entities, as if what had happened in Mozambique had happened to fellow citizens. The loss was felt across borders. One of the most notable initiatives by Portuguese civil society was aid in the assembly and operation of healthcare-related structures. Infrastructures in Beira were badly damaged and the Portuguese Red Cross (CVP) played a very important role in this regard.

In the days following the cyclone, emergency response operations began to ensure the basic living conditions of the countless victims. In Portugal, an appeal was made to raise funds through operation “Embondeiro por Moçambique” (Baobab for Mozambique), the umbrella name for all initiatives and activities carried out as part of the CVP response to the crisis.

FROM EMERGENCY TO RECOVERY

On March 24, a team of 24 doctors, nurses and psychologists left on a mission to set up and operate the CVP Field Hospital in Beira. The team was led by Lara Martins, vice-president of the Portuguese Red Cross. It was her 36th birthday and the trip turned out to be her greatest gift: “It was a surprise. Especially, because we weren’t exactly sure what to expect after leaving Lisbon”. The difficulties they were to face, started as soon as they landed: “When we landed at Beira airport, we found that we didn’t have the logistics support to unload the 35 tonnes of cargo we had with us, but we quickly turned it into a positive: we rolled up our sleeves and started unloading the plane ourselves”.

After 12 hours, which seemed endless, the team finally finished unloading the plane, feeling a deep bond and unwavering strength that would guide them in all their actions on the ground. “The team, which had met just three days before, only really knew who was who the next day. Until then, we only knew each other’s last names. We didn’t even know each other’s role or job title. And I believe that that was the secret to the team spirit of the first team”, concludes Lara.

Six days later, a second plane with humanitarian aid for operation “Embondeiro por Moçambique” (Baobab for Mozambique) departed for Sofala, a Boeing 767 financed by the Jerónimo Martins Group and its main shareholder, the Francisco Manuel dos Santos Society. It was carrying 33 tonnes of humanitarian aid, including a field maternity hospital.

There were lives waiting to be born, no time could be wasted.

Nurse Maria de Jesus Maceiras, from the Portuguese Red Cross School of Health, boarded the plane with the goal of leading a team to implement emergency mother-child protection measures and to provide related training to the local medical community. Maria knew that there were lives waiting to be born, that they could not wait for her questions to be answered. “The maternity hospital needed me. I introduced myself and started working right away, quite naturally, as if I knew my way around the department”, she shares. The first birth was particularly special to her: “We were on our way out, at the end of the day, and a doctor called me to check on a woman. At first sight, the baby was not headfirst, it was sitting.

Theoretically it was only one baby but, when I took a closer look – the belly was big – I heard two heart beats”. This situation would normally require a caesarean section but there wasn’t any time to take the mother to the Beira hospital: “When I looked back, I saw a baby coming out. Fortunately, they were fraternal twins and the birth went well. I was ecstatic.” In the midst of the confusion and lack of conditions, many of these babies are born in and leave the maternity hospital without being named. Many of the families fear that the children won’t survive and local traditions also have to be observed when it comes to naming a newborn. 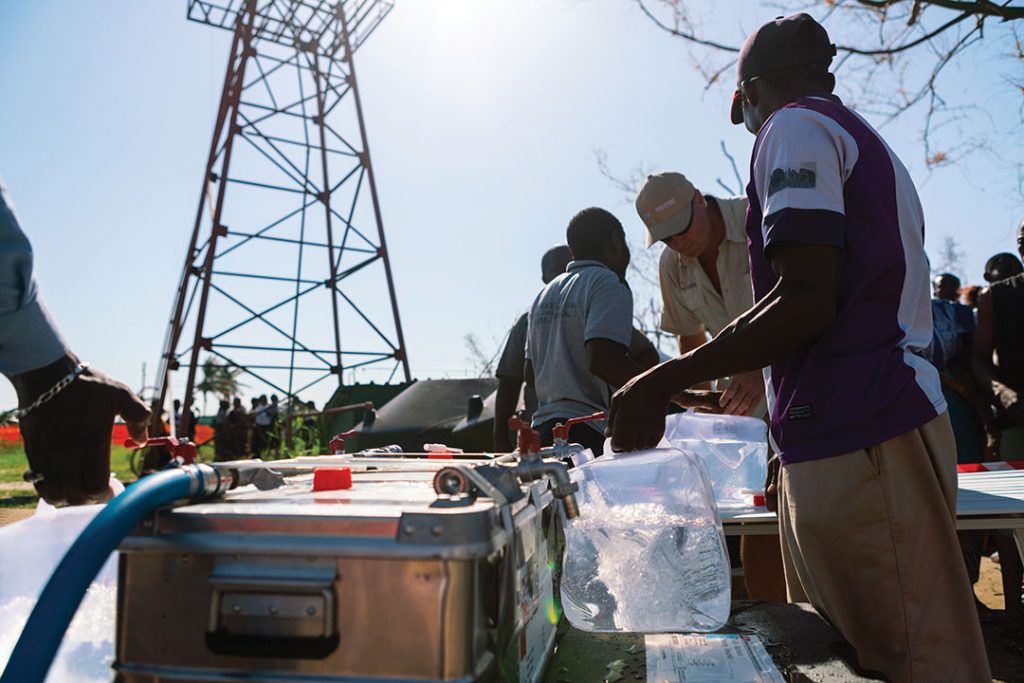 But Maria’s enthusiasm led her to christen the children that were born at the Macurungo maternity hospital with the names of her children. So “all the boys are called Tomás and all the girls are called Carlota”.

Two premature twin girls, born at 24 weeks, had a different fate. Maria says that these are always delicate cases, but recalls that “in Portugal, they are sent to neonatology, and the outcome varies; the conditions there are different. The only thing we could do after the two girls were born, was clean them, keep them warm and wait for them to die”, she says sadly.

After the emergency stage, the CVP paradigm of intervention shifted focus: “Emergency care was no longer the focus but rather improving healthcare services. The more pressing needs had been met”, explains Lara Martins. “The situations we began assisting with two months after the cyclone already existed before Idai hit. The reconstruction of the maternity hospital and the healthcare centre are our two main missions and we aim to leave here with those accomplished and having empowered local human resources”, she adds.

THE MIRACLE OF WATER

Threatened by a cholera outbreak due to the deterioration of health and hygiene conditions, having access to drinking water can mean the difference between life and death. DEMA, the Danish Emergency Management Agency, has placed a team of 13 operators and 6 water purification machines in Beira. The technology used turns green, foetid water into transparent, colourless, odourless and tasteless water, free from disease borne bacteria. The water to be treated is extracted from the well into a tank, carried through pipes and deposited crystal clear into two ten-thousand-litre tanks where it is stored for distribution to the population. A miracle with a touch of magic which produces a flow of 200 thousand litres per day. 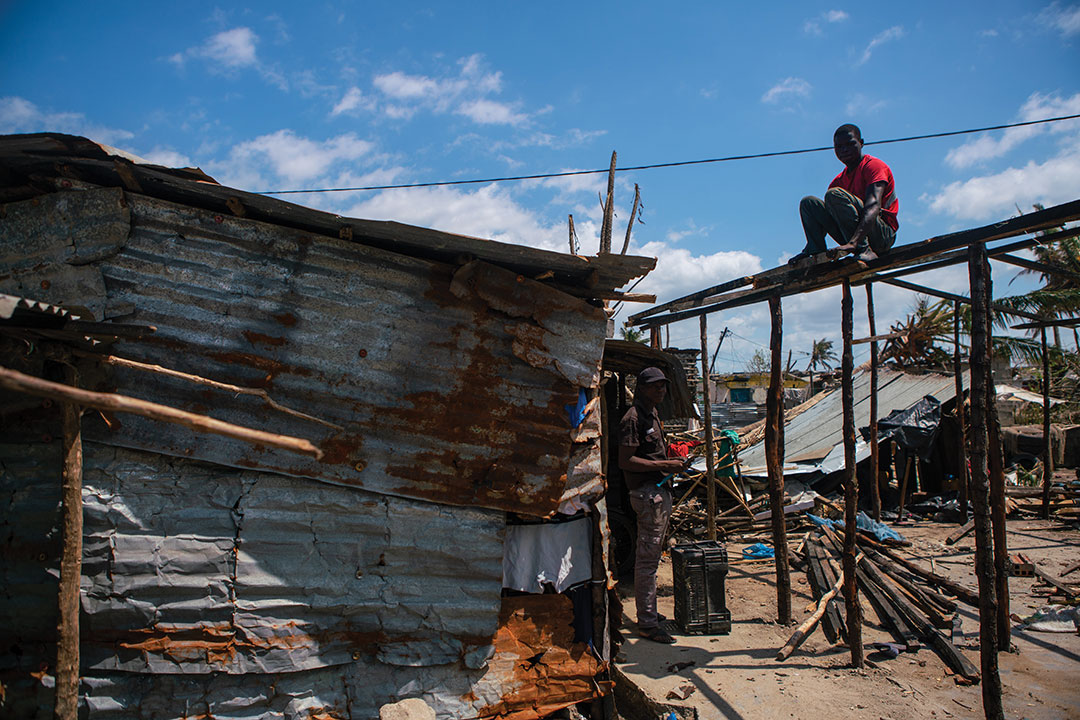 The vast majority of the houses in the city of Beira were completely destroyed and, basically, the infrastructures ceased to function. The risk of spreading diseases was one of the main concerns of the health authorities.

Cyclone Idai’s trail of devastation has ruined the sanitation infrastructures of Beira, providing the perfect conditions for cholera to spread. Lines were formed, so that thousands could receive cholera vaccines and could have safe water to drink. 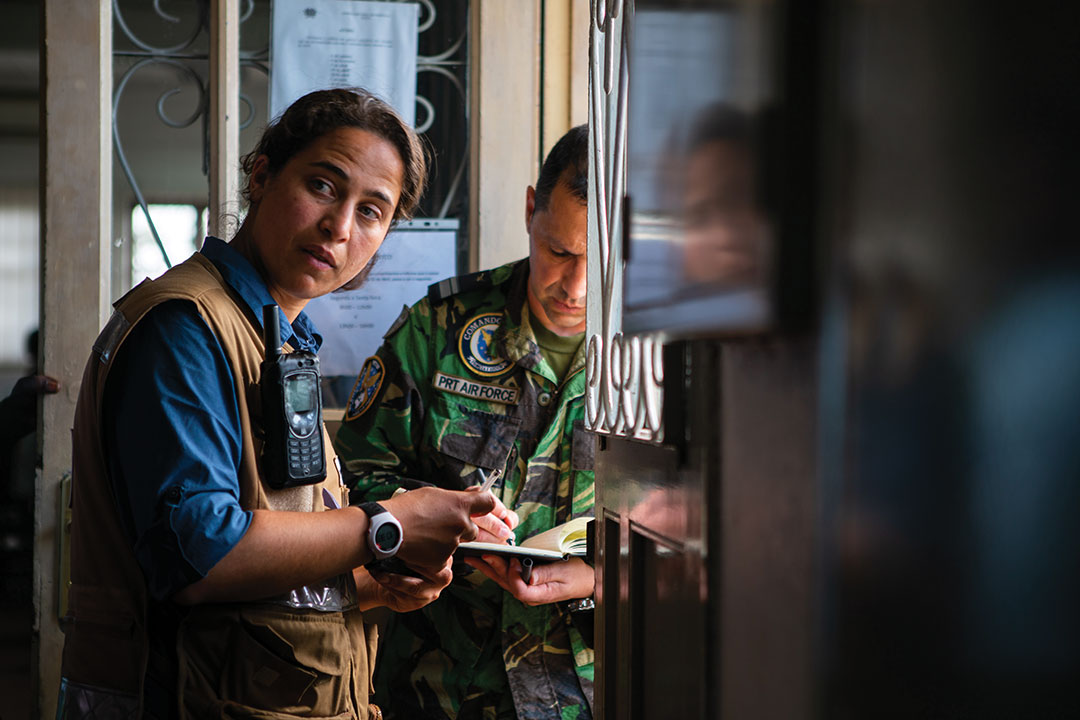 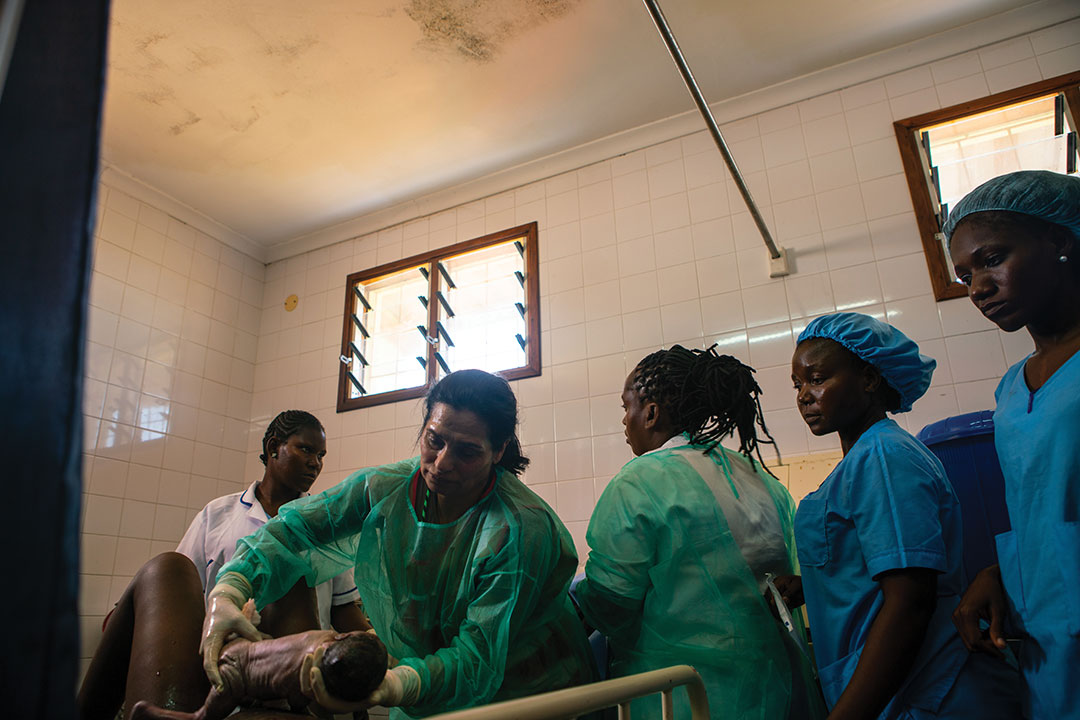