The United Nations officially came into being on 24 October 1945. 75 years ago, in the aftermath of the horrors of World War II, the UN set up a new order built upon hope, peace, equality and justice. 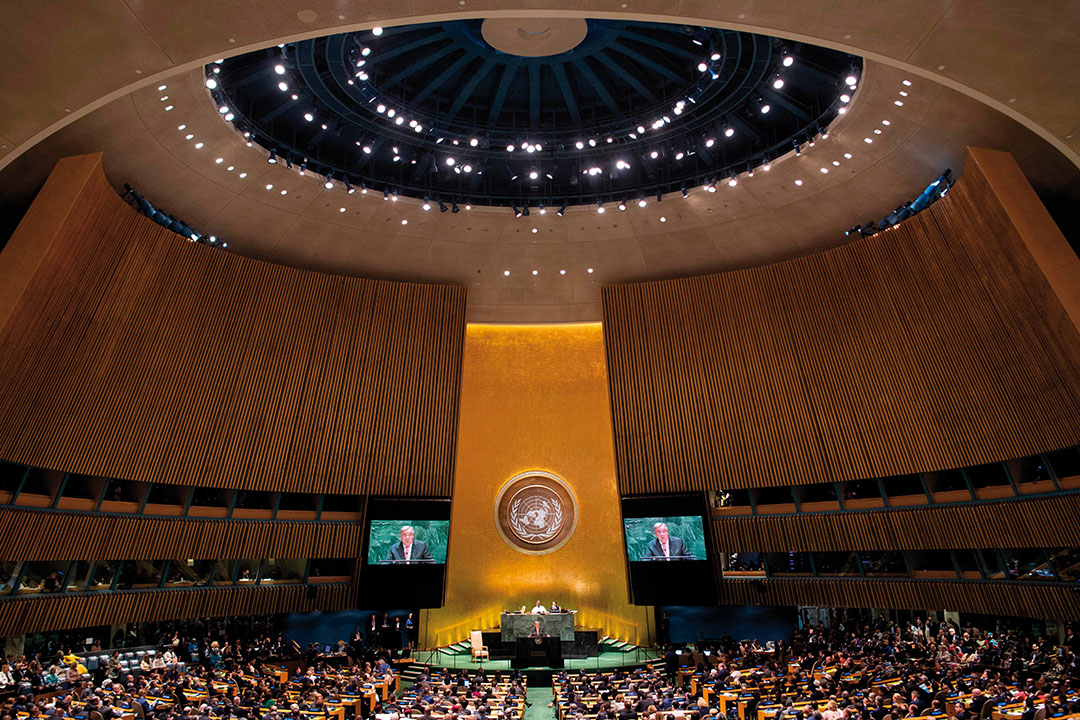 “We, the peoples of the United Nations.” 75 years ago, this phrase changed the course of history forever. World War II was over and the planet was crying out for peace. Signed in San Francisco by the representatives of 50 countries, the United Nations Charter expressed the commitment to protect, value and promote human rights, dignity, justice and peace for all.

The document was signed on 26 June 1945 by China, France, the Soviet Union, the United Kingdom, the United States and the majority of the other signatories, such as Argentina, Brazil or Colombia. As it was not represented at the official Conference, Poland, for instance, signed it later on that year. After ratification by the five permanent members of the Security Council, the Charter entered into force on 24 October 1945, which has officially become United Nations Day.

Suggested by the United States President Franklin D. Roosevelt, the term “United Nations” was first used in the Declaration by United Nations of 1 January 1942.

It was only in 1955 that Portugal became a member of the UN, despite still being under a totalitarian political regime at the time and the country’s fear of having to concede in its colonial policy.

Fast forward to 2020, the UN purposes and principles remain true and crucial to this day in addressing complex global challenges, with the Covid-19 pandemic being one of the greatest tests humanity has experienced since World War II. What started as a group of 51 states has grown over the years: today, there are 193 members. Since its inception, the organisation has undertaken numerous humanitarian, environmental and peacekeeping missions that are worth celebrating. 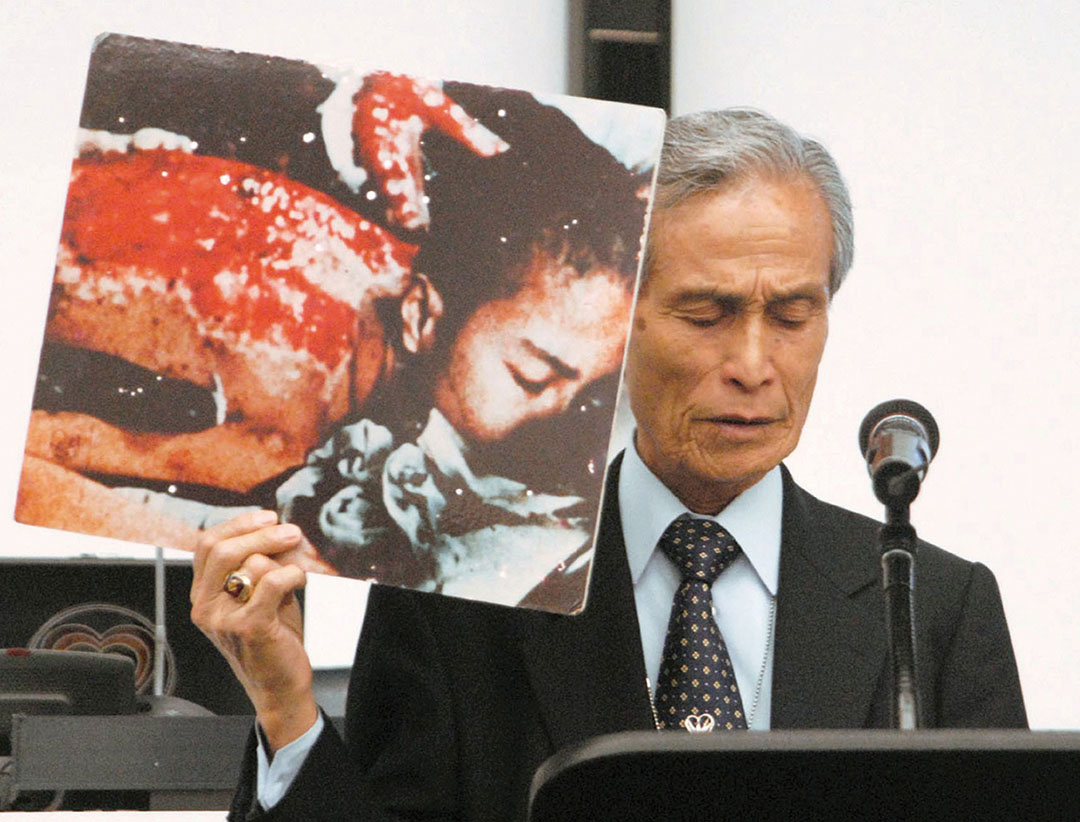 Atomic bomb survivor Sumiteru Taniguchi giving a speech at the UN conference on reviewing the Nuclear Non-Proliferation Treaty in New York with a picture of himself suffering from severe burns caused by the US atomic bombing of Nagasaki in 1945. He was 16 at the time. Taniguchi died of cancer on 30 August 2017, at the age of 88.

During Trygve Lie’s term of office, this milestone document in the history of human rights was proclaimed in Paris by the General Assembly. Eleanor Roosevelt served as the first Chair of the Commission on Human Rights. At a time when tensions between Eastern and Western blocs were increasing, the prestige and credibility of the then First Lady of the United States guided the drafting process successfully. The text has been translated into over 500 languages (it’s actually the most widely translated in the world), and Human Rights Day is commemorated every year on 10 December.

THE COLD WAR AND THE SUEZ CRISIS

“The United Nations was not created to bring us to heaven, but to save us from hell”. This statement by the second Secretary-General of the UN is a good illustration of his vision and pragmatism. The Swedish diplomat Dag Hammarskjöld served as Secretary-General from 1953 to 1961. He died in a plane crash while on a mission to negotiate a ceasefire in the Congo Crisis. During his eight years in office, he faced several international crises, many of them related to the Cold War. Hammarskjöld’s main achievement was the creation of the United Nations Emergency Force, the first UN peacekeeping force, to secure and supervise the cessation of hostilities during the Suez Crisis in late 1956. He is the only Nobel Peace Prize laureate to have been awarded the prize posthumously.

Regarded as an essential pillar of international peace and security, the Treaty on the Non-Proliferation of Nuclear Weapons (NPT) was opened for signature in 1968 and entered into force in 1970. A total of 191 states have become parties to the treaty, including the five nuclear-weapon states (the five permanent members of the Security Council). More countries have ratified the NPT than any other arms limitation and disarmament agreement.

International Women’s Year was marked by the first World Conference on Women. Held in Mexico City, the event launched a worldwide dialogue on gender equality and a whole new era in global efforts to promote the advancement of women.

The World Health Organisation (WHO), a UN agency, led the global effort to eradicate the disease. After almost 13 years of immunisation campaigns, the WHO officially declared smallpox extinct.

The UN Environment Programme sponsored a 24-nation conference to pledge to take action against the deterioration of the ozone layer. After nearly five years of talks, the group produced the Treaty on the Protection of the Ozone Layer, known as the Montreal Protocol. The countries promised to halve production and emissions of CFCs (chlorofluorocarbons, a type of gas used in aerosols) by 1999.

The Norwegian Nobel Committee honoured the UN (for the first time as an organisation) and Secretary-General Kofi Annan for “their efforts in favour of a better organised and more peaceful world”. In its 75 years of existence, the United Nations, its specialised agencies, related agencies, funds, programmes and staff have been awarded the prestigious Nobel Peace Prize 12 times.

“Let us pick up our books and our pens. They are our most powerful weapons. One teacher, one book, one pen, can change the world.” This is how Malala Yousafzai addressed the first UN Youth Assembly, which featured nearly 1,000 youth leaders, to stand up for universal education, urging hundreds of young people to use education as a weapon against extremism. According to a report released by UNICEF in 2017, 27 million children are out of school in conflict zones.

The Sustainable Development Goals (SDGs) were adopted by all United Nations Member States as a universal call to action for a better and more sustainable future for all by 2030. From eradicating poverty and ensuring zero hunger, to gender equality and climate action, all the 17 SDGs are integrated, recognising that action in one area will affect the others, which means that development must balance social, economic and sustainability criteria.

Adopted at the Paris climate conference (COP21) in December 2015, the Paris Agreement set out a global framework to avoid dangerous climate change by limiting global warming to well below 2°C and pursuing efforts to limit it to 1.5°C. The Paris Agreement entered into force on 4 November 2016, following its ratification by at least 55 out of the 197 parties to the convention, altogether accounting for at least an estimated 55% of total global greenhouse gas emissions. 188 of the nations that attended COP21 are now parties to the document.

Fabulous Figures
100 years with Amália
Real Figures in a Barbie World
A Legacy with a Future
António Guterres: “A Strong impulse to do something”