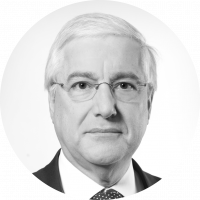 Ambassador Francisco Seixas da Costa began his career as a diplomat in 1975, having served in Portuguese Embassies in several countries. He was Secretary of State for European Affairs, between 1995 and 2001, and was successively ambassador to the United Nations, in New York, to the Organization for Security and Co-operation, in Vienna, to Brazil, to France and cumulatively to UNESCO. He has been a Non-Executive Director of the Jerónimo Martins Group since 2013. He is also a consultant and University teacher.