15 Dec The Bison of White Tower

The Bison of White Tower

They say that winter is the best time to see it in its natural habitat. But who is crazy enough to venture into the dense Białowieza forest, Poland, in the harsh winter? 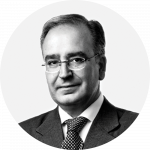 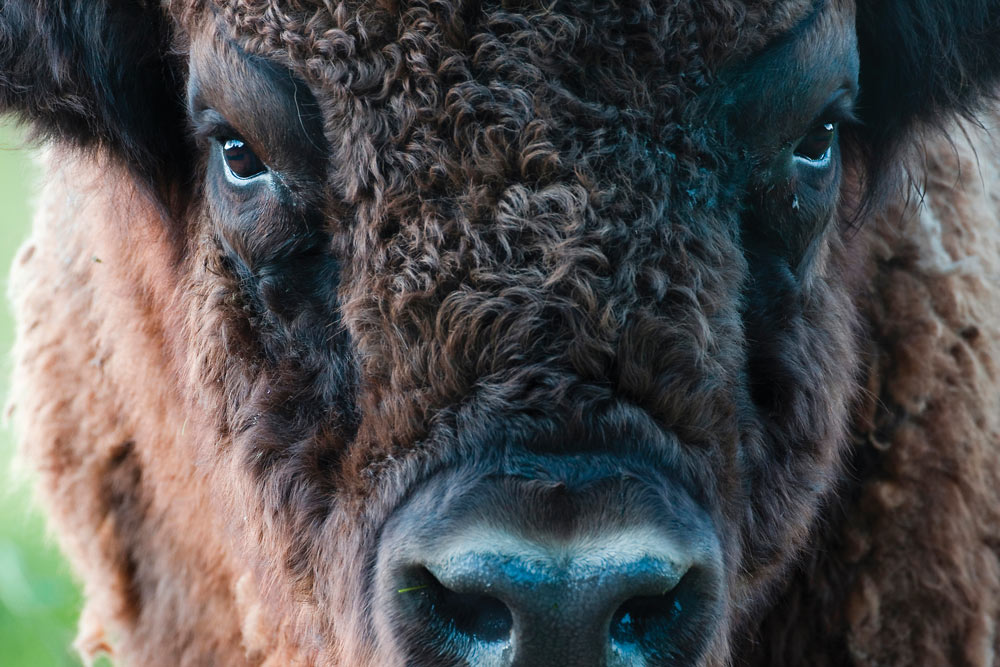 THE BISON OF WHITE TOWER

Classified by UNESCO as a world heritage site, the 150 thousand hectares of the Białowieza, the White Tower, stretch across Poland and Belarus, in what is considered one of Europe’s largest primeval woodlands. It is probably the largest, and certainly the last, true remnants of the vast expanse of green that has, for centuries, covered the European Plain, a sprawling territory that stretches from the Ural Mountains to the Atlantic, encompassing, on the western side, Holland, Denmark, the north of Germany and of France. The dark shadows of the Białowieza forest, with its leafy vegetation and ash trees over 50 metres tall, are home to 20 thousand different species of wild animals.

Among them, the European Bison, known by its scientific name Bison bonasus. Today, there are only 800 specimens left in the entire Białowieza forest. Avoiding the plains, these bison prefer to take refuge under the majestic, ancient trees, which has always fed the stories and myths told about that which is the largest and most powerful land animal in all of Europe. Weighing a tonne, the chocolate-coloured bison have miraculously survived the extinction of the megafauna as a result of the Pleistocene climate change, which led to the disappearance of the giant tarpan horses, which we saw in Avatar, directed by James Cameron, and the mythical aurochs, cattle represented in cave paintings from the Neolithic period. 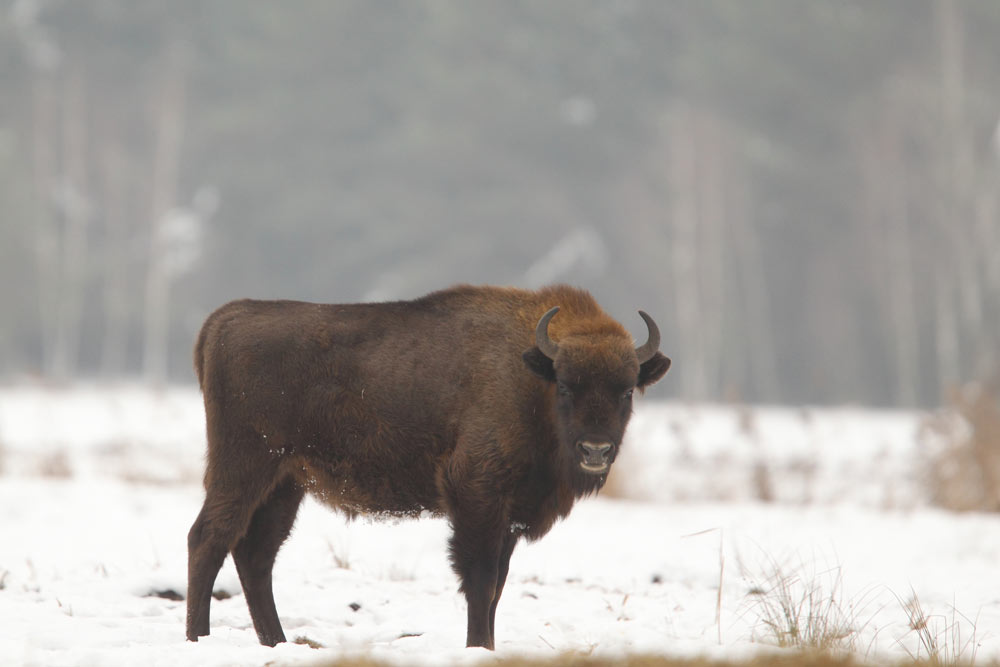 From among the wild pseudoscientific Nazi projects, was a project to resurrect the lost line of aurochs, the colossal ruminants that biologists of the Third Reich believed they were capable of recreating exactly using a strain from the European Bison. The film The Zookeeper’s Wife, directed in 2017 by New Zealander Niki Caro, which tells the story of the Żabiński family, who during World War II hid hundreds of Jews in their zoo in Warsaw, depicts a disastrous attempt at mating a bison captured from the Białowieza forest, where the Nazi scientists forget that the pre-historic aurochs were much more akin to modern-day cows or oxen than to the Bison bonasus from northeastern Poland and other areas.

Bison were found across all of Europe, inhabiting areas as far as the Pyrenees, to the west, and the Mediterranean coast, to the south. Then they started to disappear, and today there are only a few hundred, most of which find shelter under the ancient trees of the Białowieza forest. Those who wish to see them may travel to, or even stay at the railway station’s water tower built by Tsar Nicolau II. You’ll have a hard time finding them in the Wild, especially in the warmer months of the year, when they take refuge in the cool confines of the forest, in areas that are inaccessible to human beings. But there are a few dozen bison in captivity, in fenced-in areas, where they are bred and raised and can be admired by travellers.

Uncontrolled hunting and the destruction of its natural habitat has led to the near extinction of the European bison. From among the Bison bonasus subspecies, the last specimen was killed in Białowieza in 1921, and the last Bison caucasus was killed in northwestern Caucaisa in 1927. In the mid-nineteenth century, large-scale hunting led to the permanent disappearance of the Bison hungarorum. Gradually, the few specimens that remained in captivity were reintroduced into the Wild, which has enabled the conservation of the species to this day. However, there was no way to ensure the survival of the species which, in 1996, were declared to be endangered by the International Union for the Conservation of Nature. More recently, in August 2017, the European Court of Justice ordered the Polish Government to cease deforestation activities in the Białowieza, which were reported by several environmental organisations. 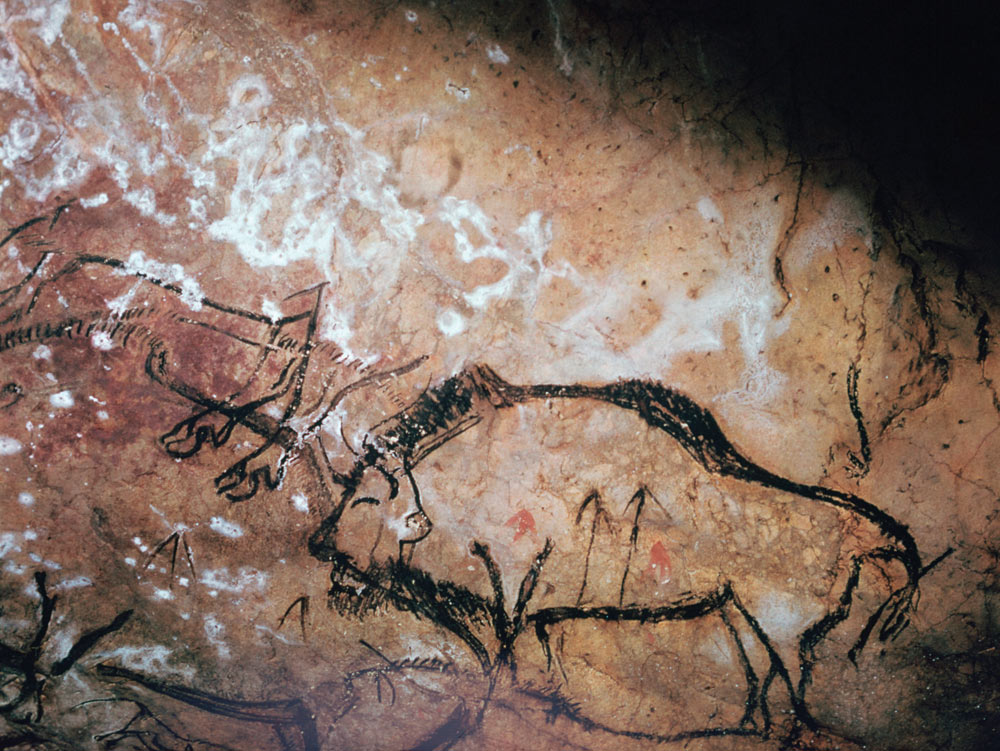 Prehistoric Cave Paintings
Image of a bison in the cave of Altamira, Spain.

With their permanent disappearance, which we hope will not happen, an imposing animal, which played a crucial role in establishing Poland’s national identity, will be lost to us forever. During the Renaissance, a young humanist born around 1480, a former student of the Jagiellonian University in Krakow, joined Erasmus Ciolek’s Delegation, the bishop of Płock (the easternmost diocese of the Catholic Church), in the Bishop’s journey to Rome to visit Pope Leo X. Given the Supreme Pontiff’s love of hunting and large animals, it was no wonder that, at the time, King D. Manuel I sent from Lisbon a lavish assemblage with a ferocious jaguar and a magnificent elephant, which paraded the streets of the Eternal City on 12 March 1514.

The assemblage included a famous rhinoceros, immortalised in a woodcut by Albrecht Dürer in 1515, which died during the journey when the ship that was carrying it sank just off the coast of Italy. The Pope was so taken by his elephant Hanno that, when the animal died, he had the various parts of its body embalmed, including its penis. Meanwhile, the young Polish poet and priest, son of a High-Huntsman, called Mikolaj Hussowski (or Nicolaus Hussovianus), dedicated a long ode to the Pope entitled Carmen de statura, feritate ac venatione bisontis [Poem about the stature, ferocity and hunting of the bison] which was printed in 1523 and is composed of 1,070 lines and exhaustively describes, in grandiloquent Latin, the anatomy, physiology, history and habits of the European bison.

In a time when the Portuguese monarch was offering exotic animals from the East and the New World to the Pope, the ode to the bison from Poland and Lithuania had a very specific diplomatic purpose: in the geopolitics of the time, it was a statement of the might of continental mainland Europe, embodied in Central Europe, given that the reach of the periphery of the Iberian Peninsula extended across the world’s oceans. The Polish bison, praised in Hussowski’s verses, found its counterpoint in the Indian elephant offered by the Portuguese monarch, King D. Manuel “the Fortunate”, an animal that was portrayed by the delicate strokes of master painter Raphael Sanzio in a drawing commissioned circa 1514-1516. 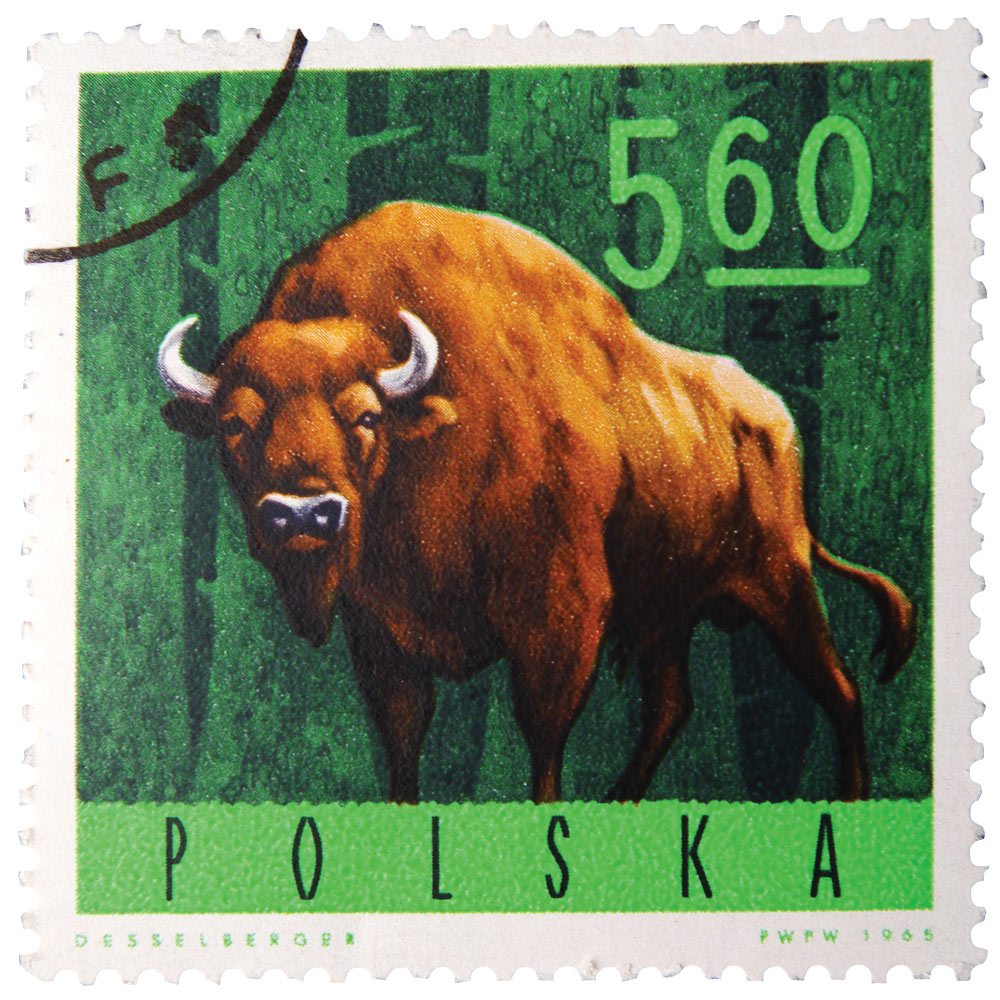 Bison found in two postage stamps printed in Poland, in the sixties. 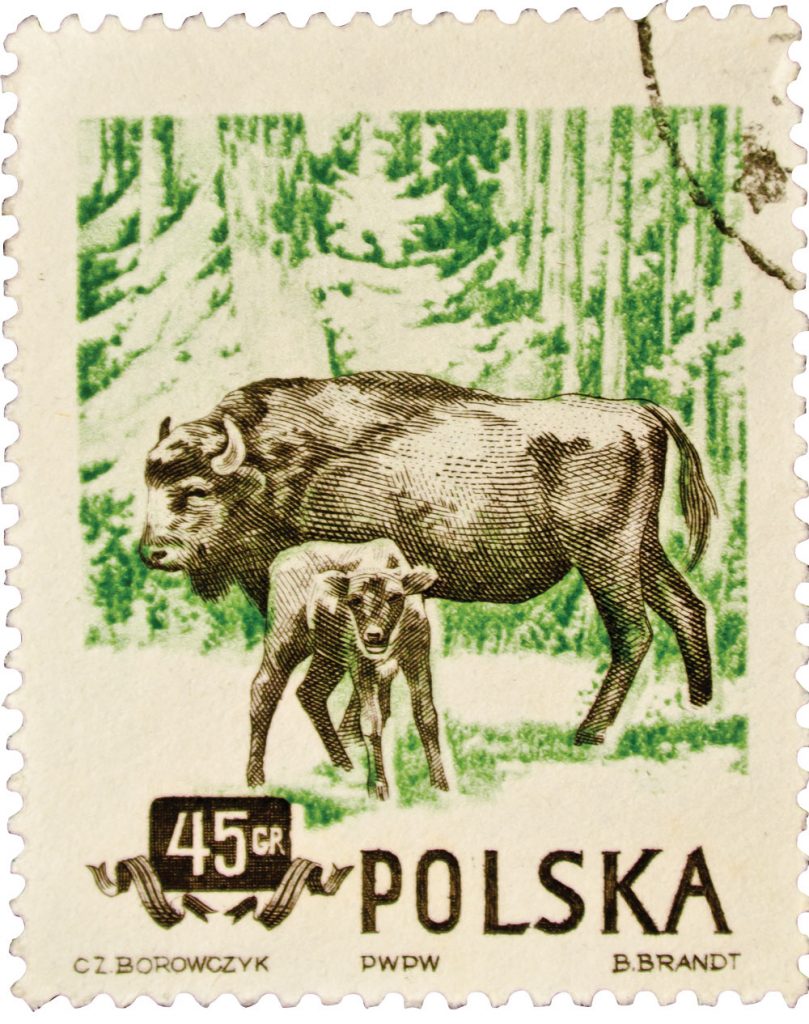 By receiving the gifts from mainland and maritime Europe, Leo X became arbiter and supreme spiritual and temporal commander of Christianity. But this wasn’t the only time bison were used as an adornment of power, of course, as you may recall, years later, King Stanisław II Augustus Poniatowski, the last king of Poland, regularly sent boxes of smoked Bison bonasus meat to Catherine the Great, his liege and lover. Prior to this, as referred to in Norman Davies’ “God’s playground”, a renowned book about the history of Poland, the hunting of Białowieza bison was staged and shown as being akin to bullfighting in the Iberian Peninsula or, more precisely, Spain.

At least, that is how it was portrayed in a description of a hunt in Podolia in the authoritative book “Polonia, sive e situ, moribus, magistratus et republica regni Polonici”(Polonia or About the Geography, Population, Customs, Offices, and Public Matters of the Polish Kingdom) which Martin Cromer published in 1577. Once again, the animals were pawns in an elaborate game of chess, where, in a delicate political and diplomatic, or symbolic and cultural web, several interests were being disputed, which went way beyond the powerful Iberian bulls or Polish and Lithuanian bison.

Nazi leader Hermann Göring used White Tower as one of his hunting grounds. Just a few kilometres from where millions of Jewish families were being massacred (the Jews made up 12% of the Białowieza population), the Reichsmarschall and his guests entertained themselves by shooting bison and elk, foxes and other wild animals. And before that, at the end of the First World War, starving German armies gunned down hundreds of bison in Białowieza, decimating what were, almost, the last specimens of the largest land mammal in Europe.

But it was thanks to Göring’s passion for hunting that the sacred White Tower forest was granted protection against those who wanted to destroy it to stop hundreds of Jews and resistant Poles from hiding among its trees. It would, however, be Göring’s Luftwaffe plane that would bomb Białowieza’s small church, much to the local population’s dismay, which also bitterly bore witness to the destruction of the Tsars’ hunting lodges, burned by German troops as they escaped. During the communist regime, they were replaced by horrendous reinforced concrete constructions.

Avoiding the plains, these bison prefer to take refuge under the majestic, ancient trees.

Today, the iconic attraction of the European bison has not been lost, far from it. The Bison bonasus is seen on the stamps and philatelic products of several countries, from France to Belarus, including Romania, and is a national symbol of Poland. In addition to the bank notes of Belarus, they feature on the label of popular vodka Żubrówka, produced in Białystok and known as the “bison grass vodka”.

According to legend, its origin dates back to the 16th century – at the time they were part of the assemblages of King D. Manuel I and Hussowski’s poem –, when peasants thought of adding bison grass to the vodka for flavour, which today is still used in bottles of Żubrówka, from Poland, and Stumbras, from Lithuania. The creators at Disney also used the bison as a source of inspiration for their leading male character of animated movie Beauty and the Beast, in 1991, which had a sequel in the recent movie-musical with the same name, released in 2017. 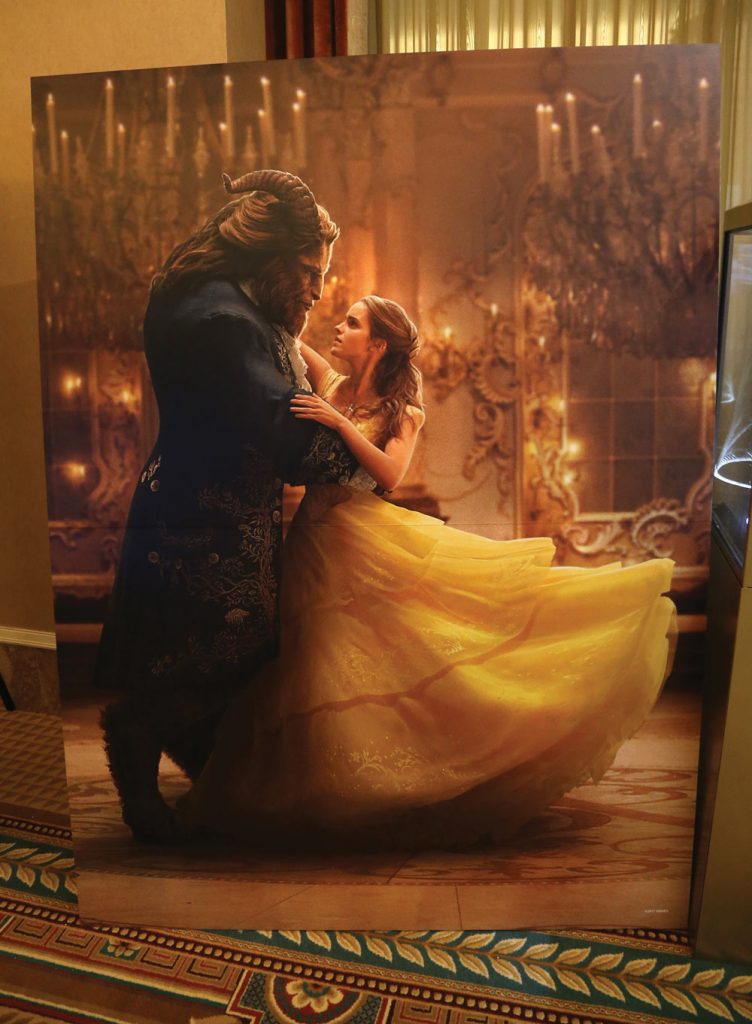 For the animated movie produced in the 1990’s, which revived an old Disney project from the 1930’s and 1950’s, illustrator Glen Keane, in charge of creating the Beast’s character, combined elements from several animals, amongst which, the horns of a buffalo and the mane of an African lion, offset by “Paul Newman blue” eyes. It’s hard to miss the obvious resemblance to the Bison bonasus in the final result: it’s there in the curved horns, which were once used as cups in loud toasts at the dinners of kings and princes; and it’s there in the thick fur around its neck and belly which, erroneously, naturalists Buffon and Lineu believed was not an authentic characteristic of the European bison, dismissed as a mere detail associated with a specific climate and habitat.

Disagreeing on almost everything related to the natural world, Frenchman George-Louis Leclerc, Count of Buffon, and Swede Carlos Nilsson Linæus agreed on one thing, the notion that the European bison was not an original species, but merely a wild variant of domestic cattle. They were wrong. Centuries later, the fact that two of History’s greatest scientists were refuted by a character from an animated movie for children is the most conclusive piece of evidence of the Wilderness’s triumph over the intelligence of the human species. 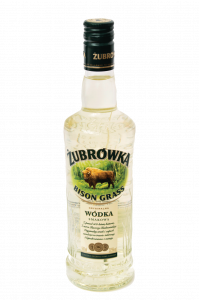 Zubrówka, one of the most popular Polish vodkas, is flavoured with Bison Grass, a distinctively aromatic plant. The tincture of bison grass also gives it the spirit its yellowish colour. This vodka is distilled from rye and bottled at 40% alcohol by volume. Its flavour is described as having woodruff, vanilla, coconut, cinnamon and almond notes. The beverage has been produced since the 16th century in the Polish- Lithuanian Commonwealth, in the region of the contemporary Polish-Belarusian border. By the 18th century, it was one of the favourite raw drinks of nobility and peasantry alike.

British historian Simon Schama has dedicated several pages of his extraordinary book “Landscape and Memory”, from 1995, to the Polish bison, which has been translated into Brazilian Portuguese (“Paisagem e Memória”, São Paulo, Companhia das Letras, 1996). For more about the Bison bonasus, in English, you can read the book “Bison”, a photo album by Andrzej Stachurski, with an extensive introduction by Jan Raczyński (Warsaw, AFW “Mazury”, 2003).