Gleba bread made the old-fashioned way

In just one year, a young man, a miller and baker, saw his business grow faster than the bread coming out of his oven. 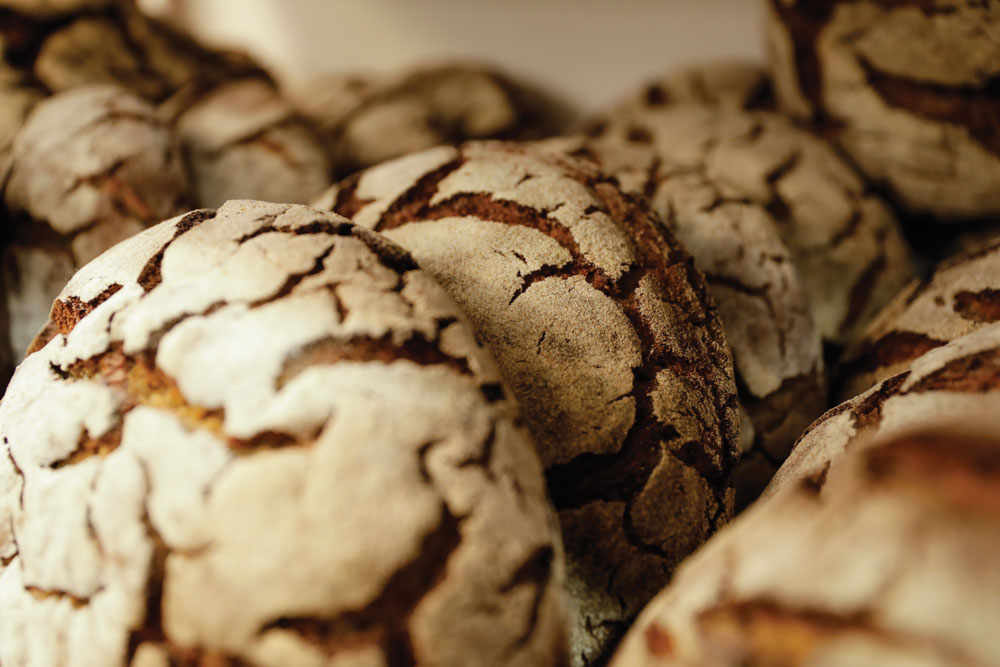 Corn bread, the likes of which not even villagers have eaten in a long time, has come to Lisbon. The queues outside the bakery are a testament to the success of an idea that breathes new life into Portuguese tradition and agriculture. It saw mouth-watering growth. “I’m from the North (of Portugal) and my family always went all out at mealtimes. 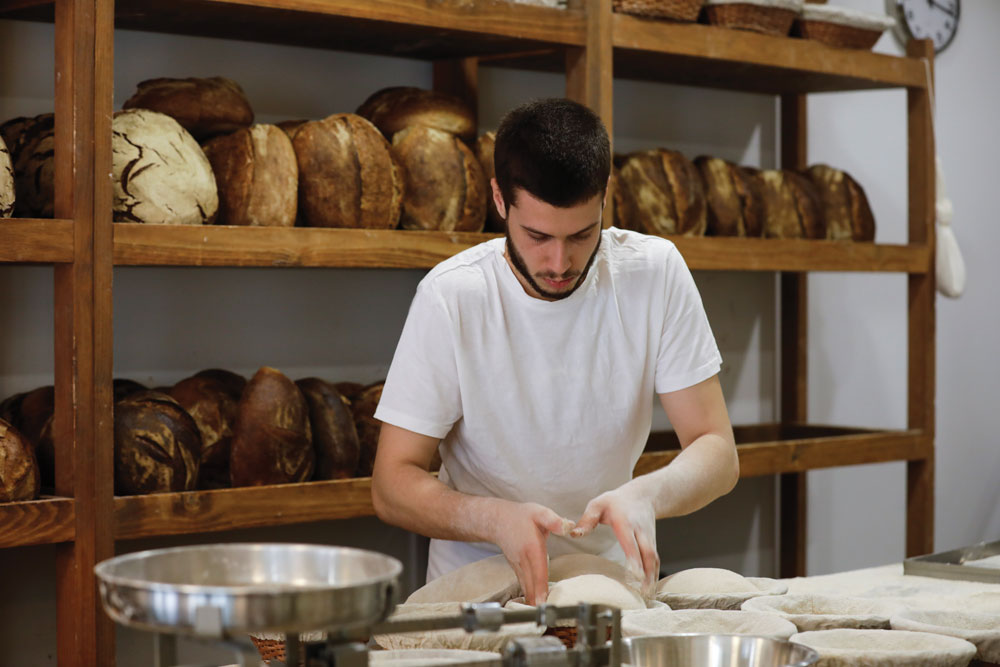 Only the best went to the table”, says Diogo Amorim who, at 21, dared to do the unthinkable: he opened a bakery that only sells home-made bread. Which means that, at Gleba Moagem & Padaria, cereal grains are ground just before the flour is kneaded, and the bread dough is left to rise naturally, a process that can take up to 28 hours.

The truth is, Diogo never thought of becoming a baker, but after studying Culinary Arts in Switzerland, where he moved when he was just 18 years old, and training at the world’s best restaurant, The Fat Duck, in London, and having spent time in the Michelin-star kitchens of Vila Joya, in Portugal, he decided to hone his skills and get a Master’s in Culinary Sciences. And he finally found the time to do what he loved.

“With three simple ingredients – flour, water and salt -, one obtains a distinct product, which cuts across various cultures and has an enormous symbolic and cultural value”

At home, Diogo Amorim made bread. “I really enjoy gastronomy in general, but I love bread, because of its simplicity and complexity: with three simple ingredients – flour, water and salt -, one obtains a distinct product, which cuts across different cultures and has an enormous symbolic and cultural value”, he explains.

He took a closer look at the domestic market and realised that “bread made with milled flour and natural fermentation is very hard to come by”. There are still those who make bread the traditional way, “but they are few and some have given in to using industrial flours and yeast sold in supermarkets”, he says. The niche was there, just waiting to be sown. And it was just as well, as Diogo also wanted to invest in seed. “We have a very dignified tradition (of making bread) and it deserves to be honoured and kept, which it was not. I saw the opportunity and grabbed it. I believe I owe my success to this, my bread is so Portuguese that I even use Portuguese grains”, he stresses. 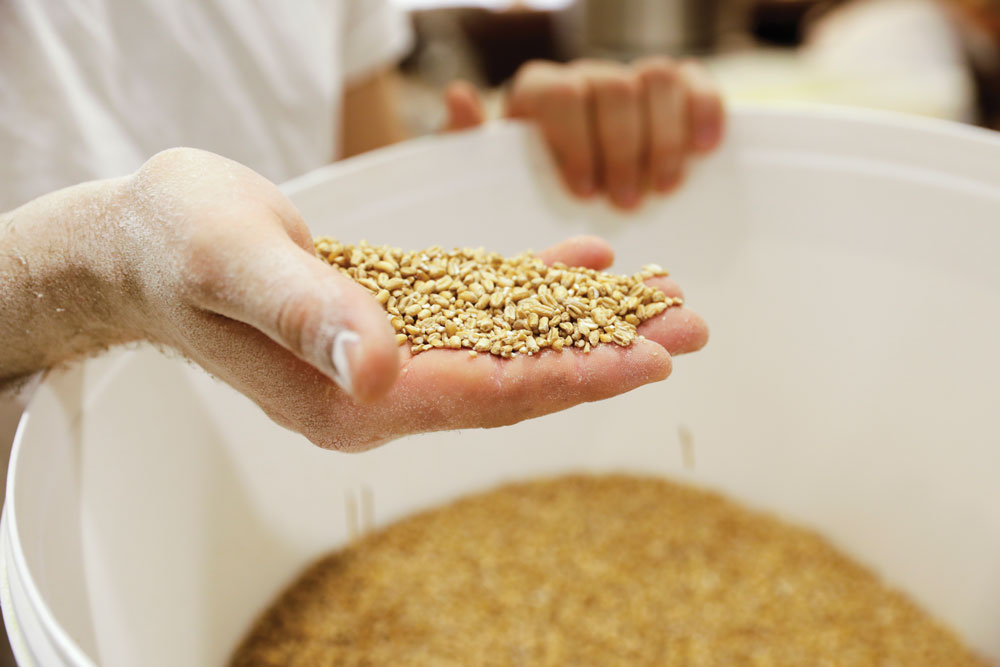 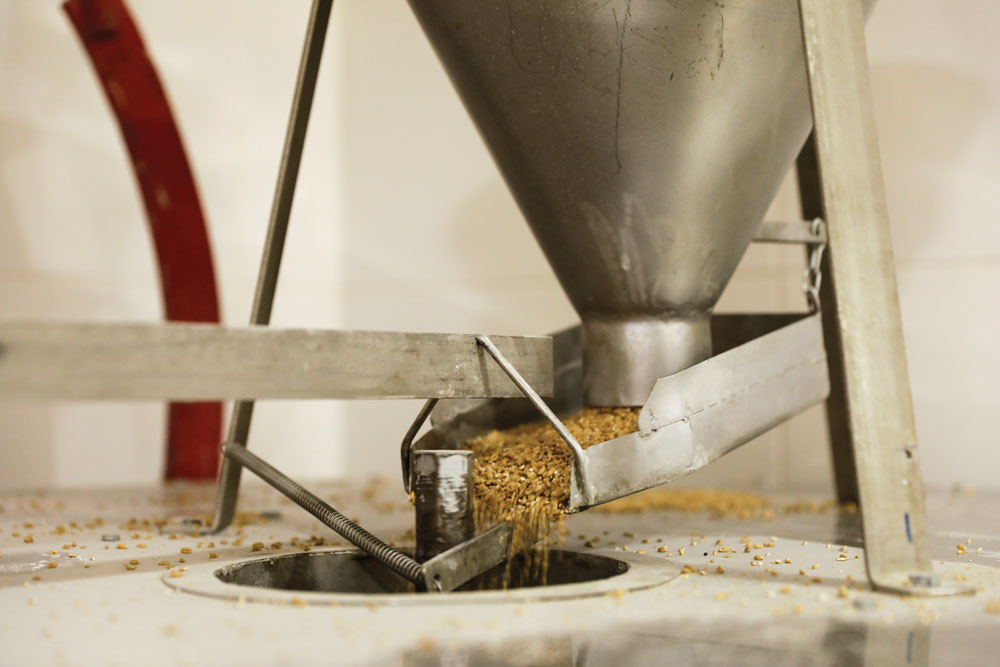 The cereals are ground in this stone mill.

The grains that are used in the five varieties of bread made at Gleba are grown by small farmers who Diogo sought out across the country. It took him two years to build the network which today ensures that he is able to use only Portuguese grains. “Finding them was field work. I would reach a village and ask if anyone knew who grew regional wheat or rye”, he recalls. Most were in Trás-os-Montes, in the north of Portugal, a region which still cultivated these grains even though they were used to feed animals – at least until Diogo came on the scene. “Instead of having their lands barren, they would plant cereal grains to make feed for cattle”, explains the founder of Gleba.

The bakery receives a large variety of cereal grains from Trás-os-Montes and also from the Alentejo region, in the south of the country; grains which were disappearing from farmlands because there was no market for them. The varieties that Diogo Amorim uses most are Barbela Wheat, Purple Wheat and Cattail Wheat. In all, 16 farmers sell their grains to Diogo Amorim. And he has to alternate, because Gleba alone depletes production: “The bakery consumes eight tonnes of grain per month”. 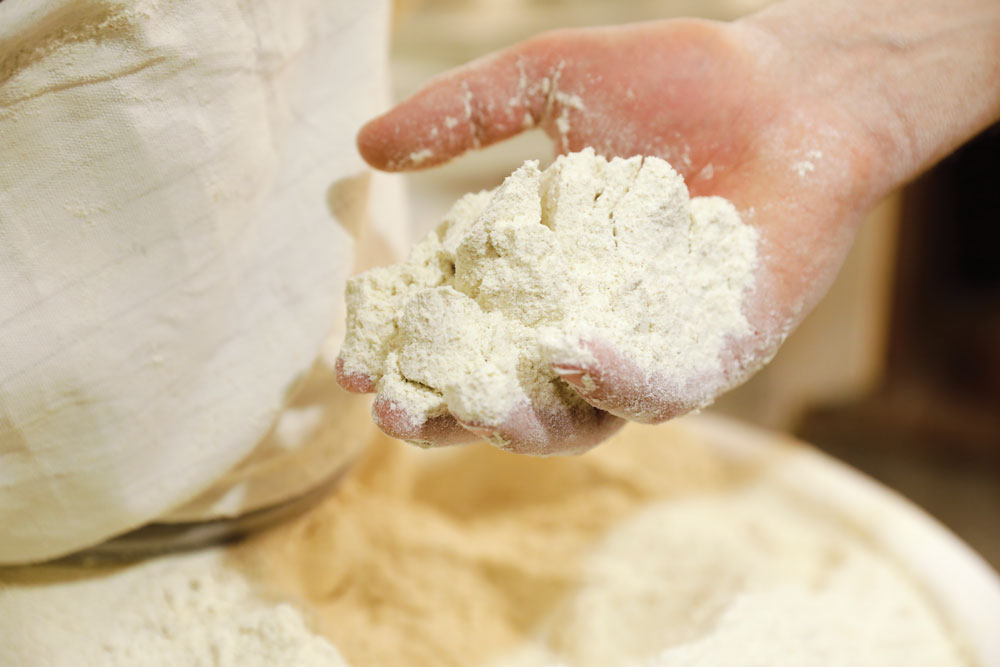 Gleba hasn’t given in to using industrial flours. Its bread is made with milled flour.

The bakery, located in Alcântara, in one of Lisbon’s characteristic parishes – Estrela – has a stone mill, which Diogo Amorim found in a village and restored. A “very rudimentary, semi-industrial system” was installed given that it was the only way to use the flour with which the baker likes to work. It’s where all grains are ground. The bakery opens at 10am, with the smell of fresh bread in the air, and particles of white flour blending with the golden rays that shine through the large window. For the two bakers – Diogo Amorim is one of them –, the day begins five hours earlier.

There are days when bread production is higher: Fridays and Saturdays. Gleba opens Wednesday to Sunday. On Tuesday, they make the bread that will be sold the next day, but before the first customers arrive aprons and counters are cleaned and the dough rests in wicker baskets covered in cloth, to add flavour and texture to the fermentation process. Diogo Amorim’s bread isn’t frozen and doesn’t need preservatives because the fermentation itself naturally preserves the bread, in a process akin to a biological one. 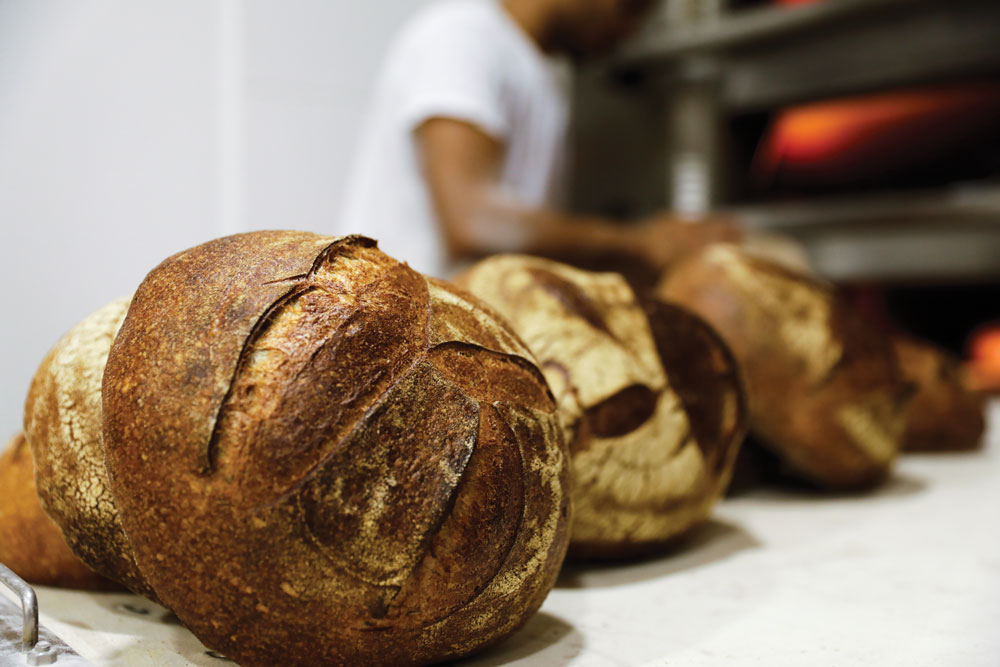 Gleba bread is tastier and lasts longer because of its natural fermentation, which means that it has a multitude of microorganisms. The lactic acid bacteria that acidify the bread, making it rise, also help to preserve it and make it healthier.

Every day, 600 kilos of bread come out of Gleba ovens. Recipes are original, created by the Culinary Sciences Master, but are inspired by traditional Portuguese recipes. Before he inaugurated the bakery, in December 2016, Diogo spent a month experimenting with combinations and mixtures, and still does today. In just a year, Gleba, which started out with a small production – “at the beginning we offered bread for people to try it” – has reached its production capacity: 600 kilos of bread are made per day.

“The dough rests in wicker baskets covered in cloth, to add flavour and texture to the fermentation process”

And, for now, they only sell to private customers, which is far from the original idea. “I always thought that our biggest customers would be hotels and restaurants, but we started running out of bread just with direct selling”, he says. The next step will be to include a delivery service and to sell to large customers. A bigger production area is also on the cards, as well as expanding the team, which is currently composed of two bakers, an assistant and a cleaning lady. They want to grow with the neighbourhood, which is also changing and attracting more people. Diogo Amorim is happy, but ensures that he will never give in to the temptation of easy money: at his bakery, bread will always be made the old-fashioned way.

EACH LOAF RISES AT ITS OWN PACE

Gleba offers five classic varieties of bread. The most sold are Barbela wheat bread and the traditional Alentejano bread. Each of the varieties has its own growth rate which is directly linked to its fermentation time.

It is a common wheat, a very fine flour with a tender and soft texture, which melts in the mouth;
Fermentation time: 28 hours.

A blend of 30% purple wheat, which is harder, and 70% celtic wheat (from the Alentejo region). Fermentation time: 9 hours.

100% rye. In Portugal, the most sold rye bread is not made entirely of rye and that is why it is a softer bread. Gleba’s rye bread is hard and dense, with an intense flavour, a hard crust and should be cut into thin slices. Fermentation time: 9 hours.

A mixture of white and yellow corn. Diogo Amorim wanted to make white corn bread because it is harder to find: bakers normally use larger quantities of yellow corn. Fermentation time: 6 hours.

SPECIALITY BREADS: 2 VARIETIES PER DAY (THEY VARY EVERY DAY) 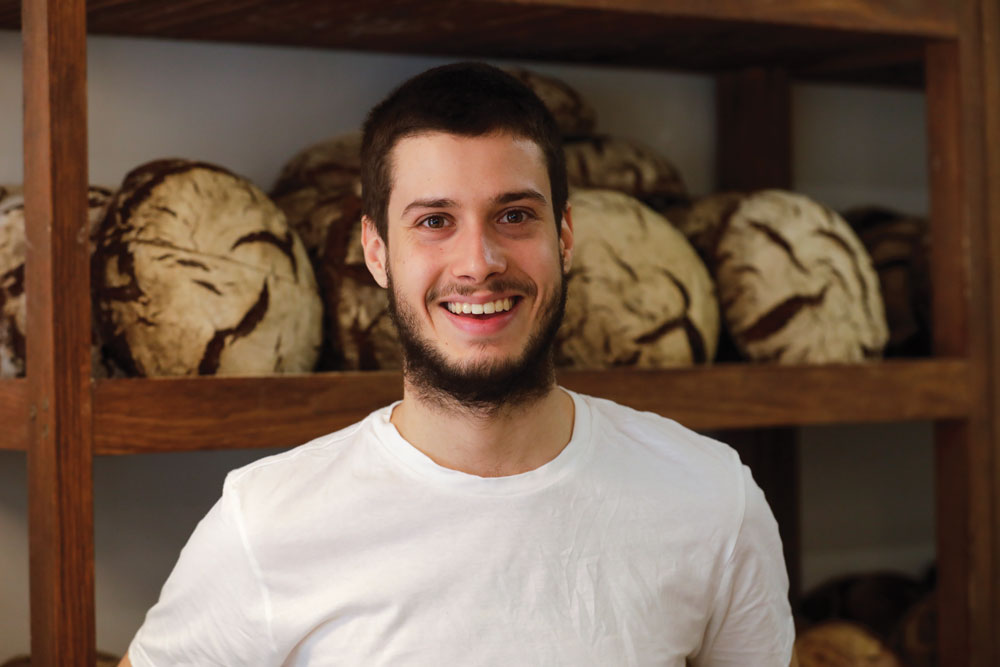 Diogo Amorim is 22 and was born in Santa Maria de Feira, in the North of Portugal. He studied Culinary Arts in Switzerland and he has a Master Degree in Gastronomic Science. He cooked at The Fat Duck, in London, and Vila Joya, in Portugal. He opened Gleba Moagem & Padaria in December 2016. 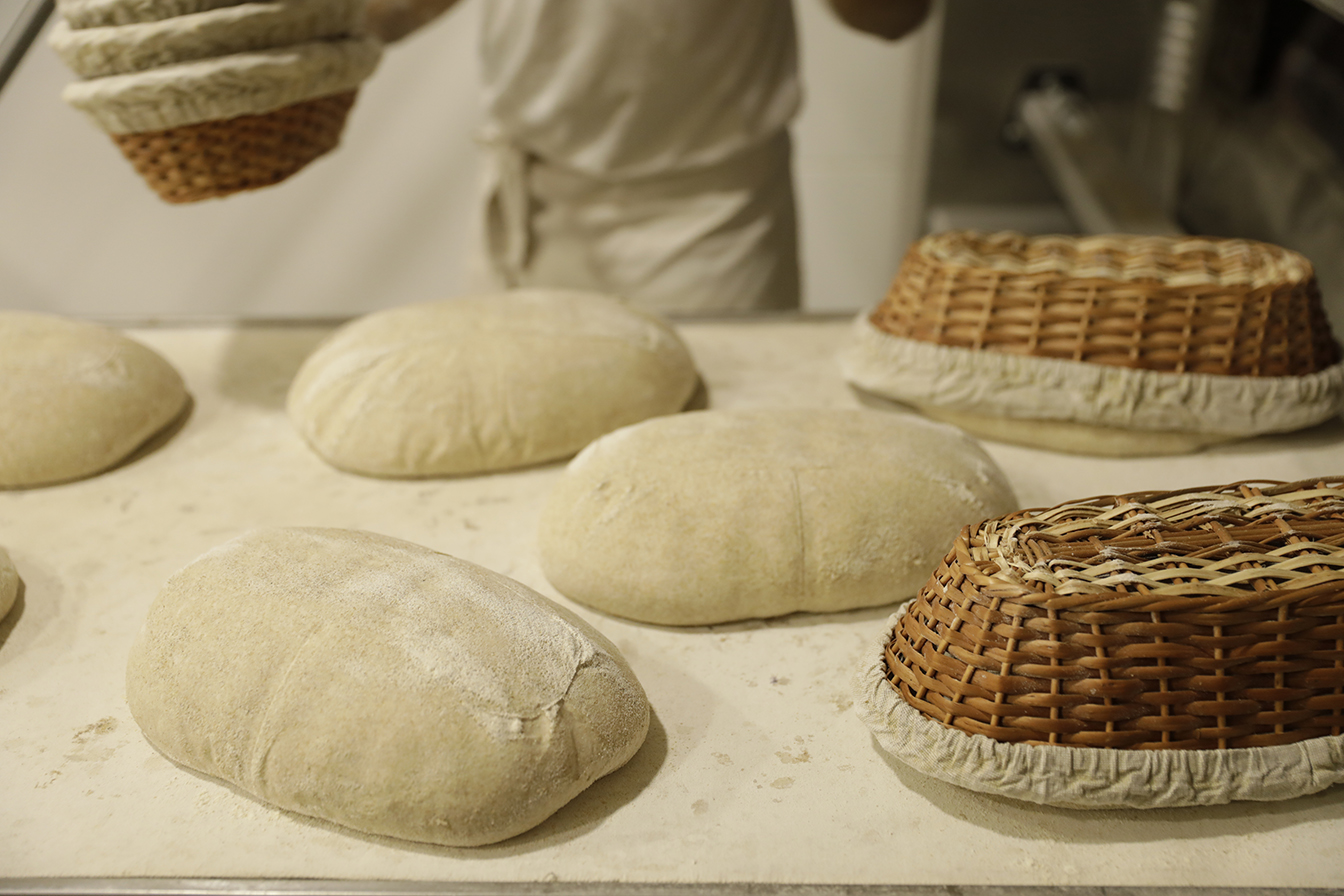 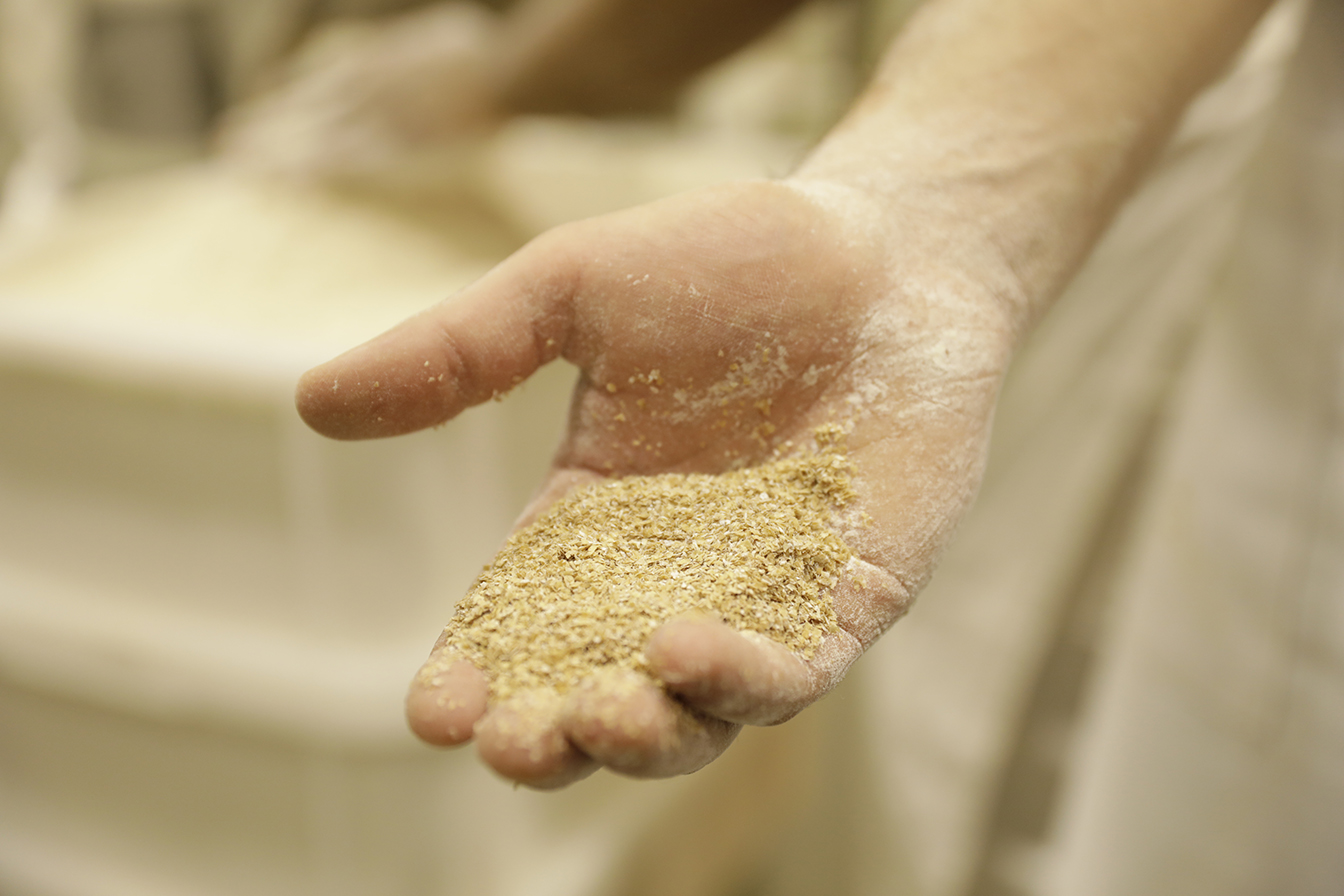 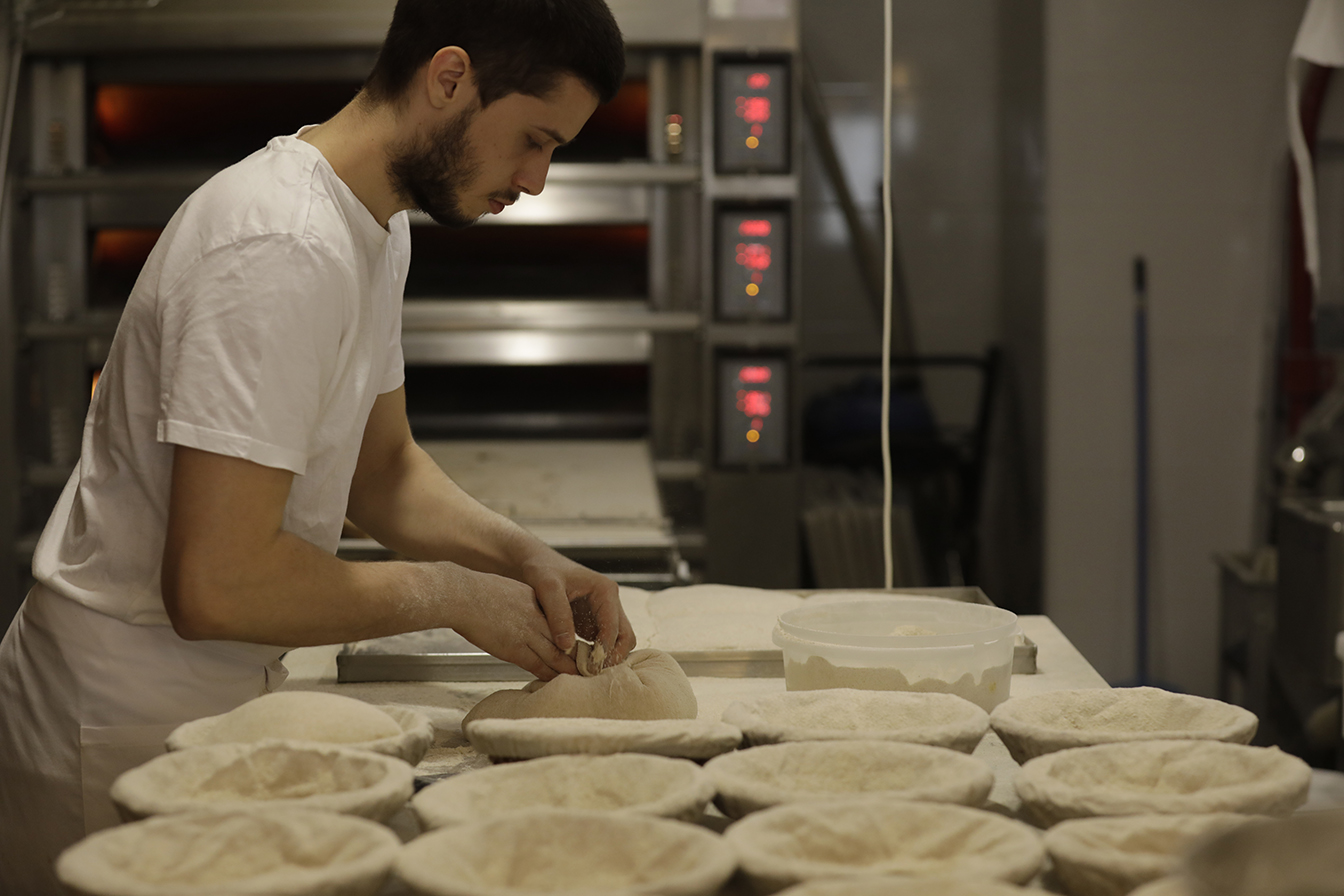 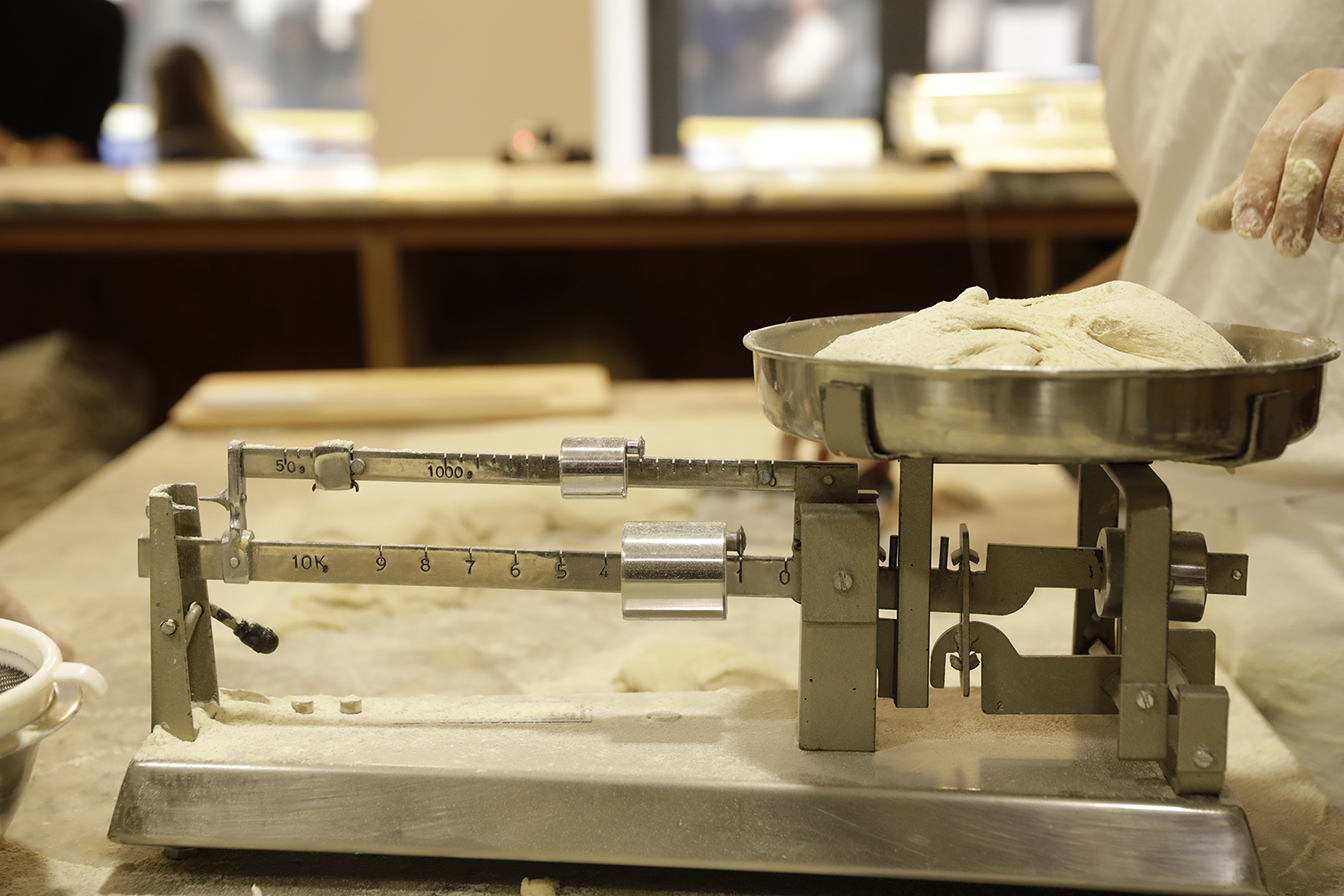 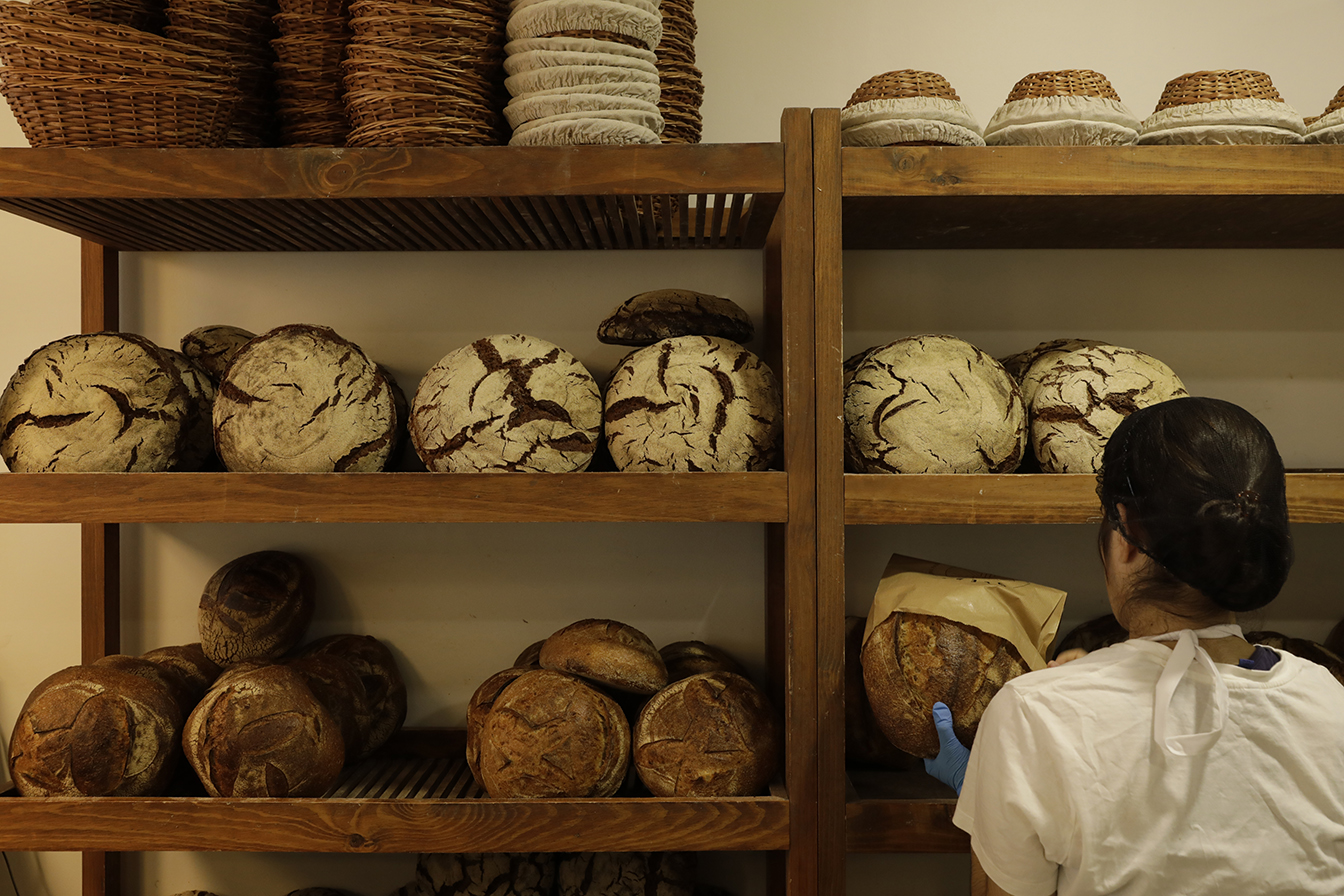 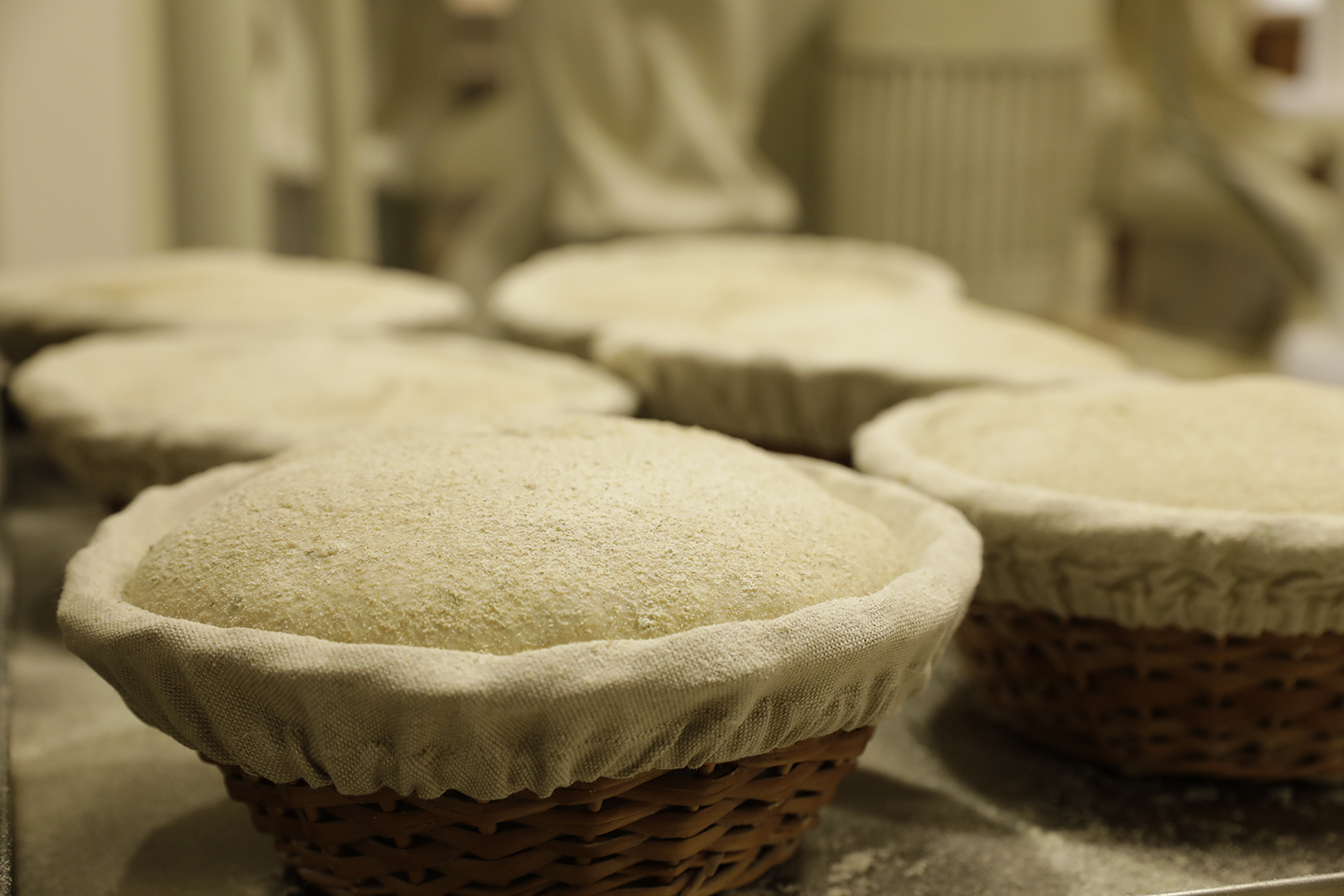 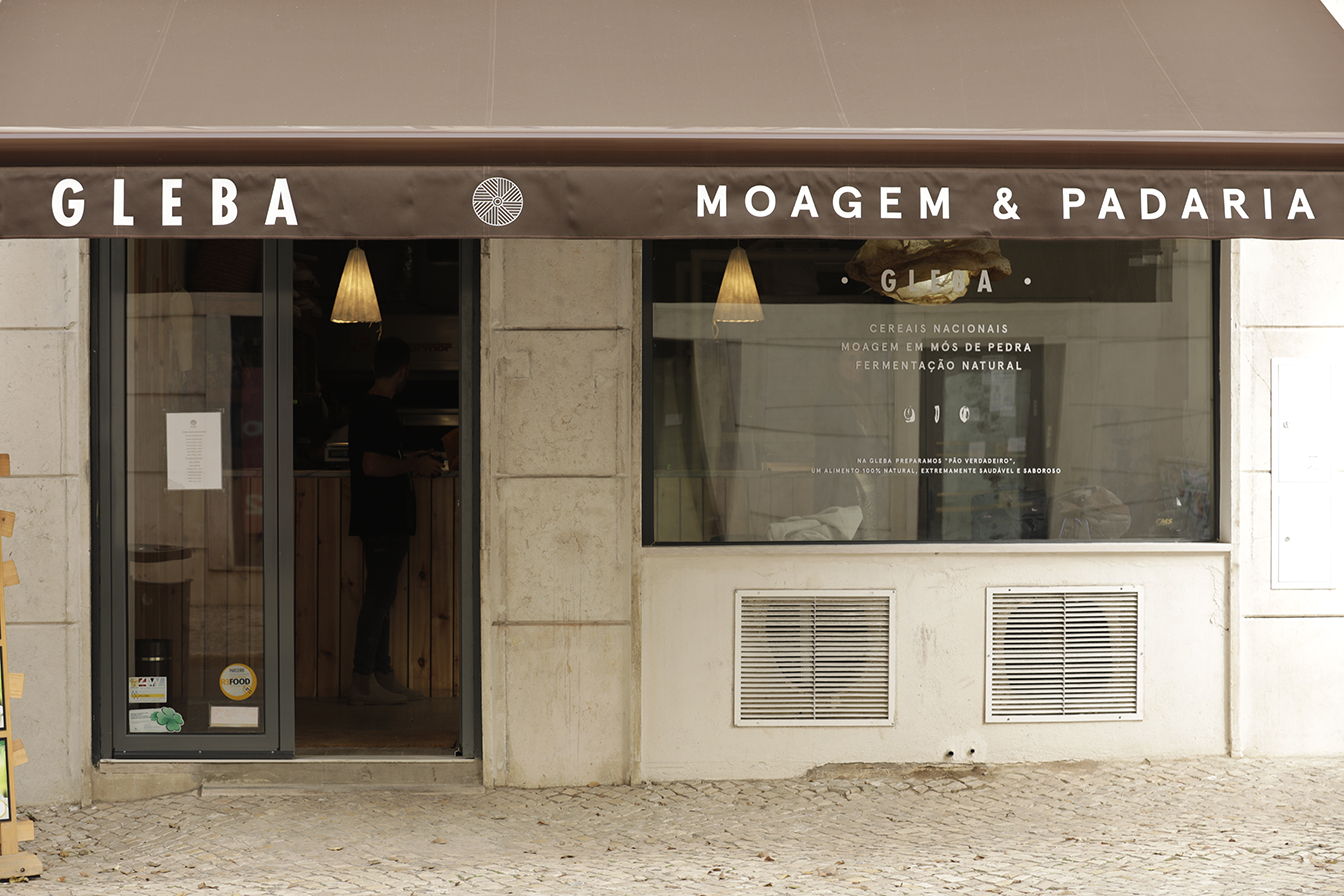