Hope for Mundial has been kick-starting the dreams of 5,000 children of more than 40 countries living in orphanages. Its co-founder Sylvester Trześniewski says that, beyond football, this programme is about how they can help children grow. 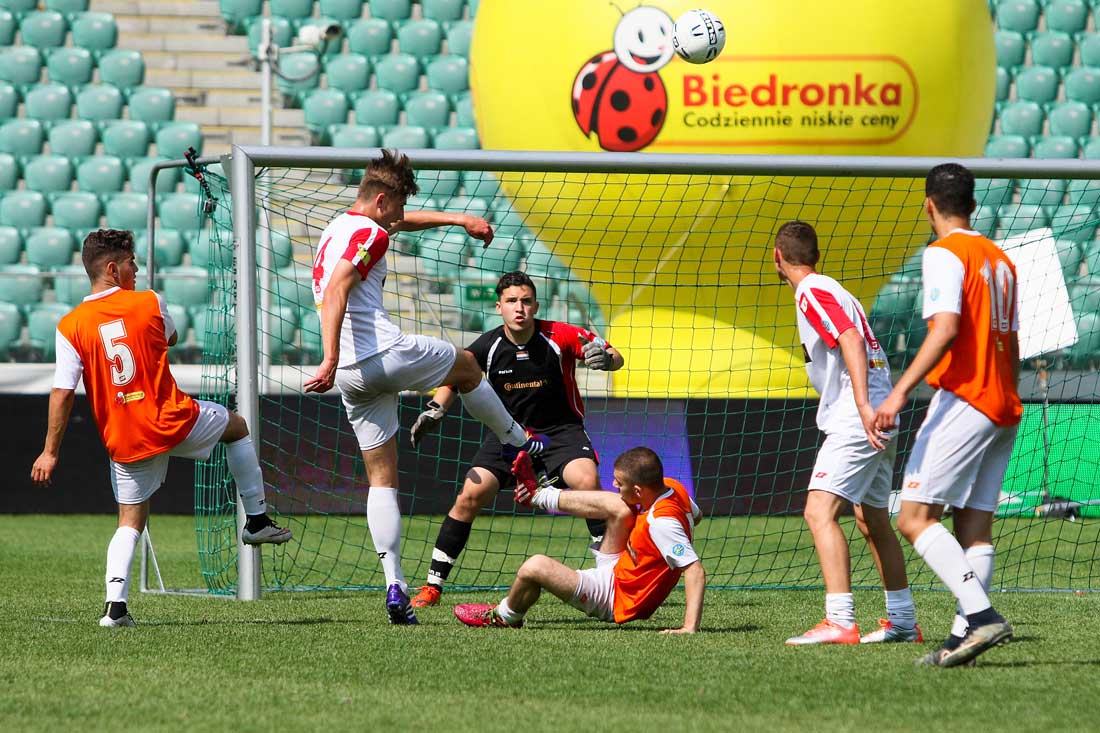 Growing up in an orphanage can limit the future. In Poland, a project was launched which aims at helping these children make dreams, that seemed impossible, come true. Biedronka has been backing the programme since 2011.

“For some of these children, taking part in the football championship allows them, for example, to travel by plane for the first time”, explains Sylwester Trześniewski, one of the Hope for Mundial association’s mentors, which organises football tournaments for children who live in orphanages. The idea isn’t to turn them into the next Cristiano Ronaldo or Messi, but to give them hope, something they are sorely lacking.

“It is not easy to reach them given that they don’t trust anyone, but we found a way to win them over”, adds the Pole, who has seen Hope for Mundial go from an idea to an international movement. “When we started out, our aim was to create an international championship, which was only possible with the support of our partners, like Jerónimo Martins, who joined us in our second year of operation”.

THE MISSION AND GOALS

An association to organise football tournaments for children living in orphanages all over the world was founded in Poland in 2010. In addition to the World Cup, in which children from several countries participate, there are also national championships in Poland, Germany, Holland, Thailand, Belarus and the Czech Republic. In 2018, the association aims at launching a coaching course for children who turn 18 and leave the institutions. 5,000 children are part of the programme.

THE WORLD CUP IS HELD EVERY YEAR WITH 30 TEAMS

This programme isn’t about football, it’s about how we can help the children grow.

In addition to financial aid, Biedronka donates food products during the World Cup. “It doesn’t seem like much, but to these kids it’s a day of celebration, says Sylwester Trześniewski. The purpose of the association isn’t to train football players – although some of the youngsters have gone on to become professional players. “If they can work here, as a team, I believe they can do the same in their personal and professional lives”, says the project’s mentor.

For 2018, Hope for Mundial aims at launching a new programme for those who have completed their high school studies and have to leave the orphanages. “We want them to come back. We want them to become coaches and to help the younger children”, says Sylwester.

“THE IDEA
IS TO GIVE
THESE CHILDREN
HOPE”

CO-FOUNDER OF HOPE FOR MUNDIAL

HOW HAS HOPE FOR MUNDIAL EVOLVED SINCE IT FIRST BEGAN UP TO NOW?
When we started out, the association was very small, but our ambition was to create an international championship, which was only possible with the support of our partners, like Jerónimo Martins, who joined us in our second year of operation. The programme has grown a lot since then: in addition to the national championship (in Poland), we created the World Cup, and some countries also have a national championship (like the one we have here in Poland).

HOW DOES THIS PROGRAMME ENCOURAGE HUMAN DEVELOPMENT?
It is a difficult group because most of these children don’t have parents and, therefore, don’t trust anyone. It is very hard to do anything with them, but we found a solution: they like football and with it we found a way in. However, this programme is not about football, it’s about helping the children to grow up. If they can work here, as a team, I believe they can do the same in their personal and professional lives. These children live on the margins of society, and football – this is my hope – could give them a chance to start a new life.

HAVE PROFESSIONAL PLAYERS EMERGED FROM THESE CHAMPIONSHIPS?
Some players are in the second and third leagues, and there are some countries in which these children have reached the premier league. But they are few. The purpose of this programme isn’t to train professional players, considering that these children also started playing later in life, but they could become coaches and help other children living in orphanages, because no one understands them better than they do. Today, in Poland, some of the children who took part in the championships or in the World Cup are coaches.

Madres Comunitarias, more children with food Aid
Fundação Obra do Ardina
Being part of the Community
The Raw material of Growth
Managing the best people