Portugal’s largest expanse of green disappeared in a single day, in the fiercest forest fire of the past 100 years. Fires also consumed part of its History, but beneath the ashes are the seeds of reforestation. 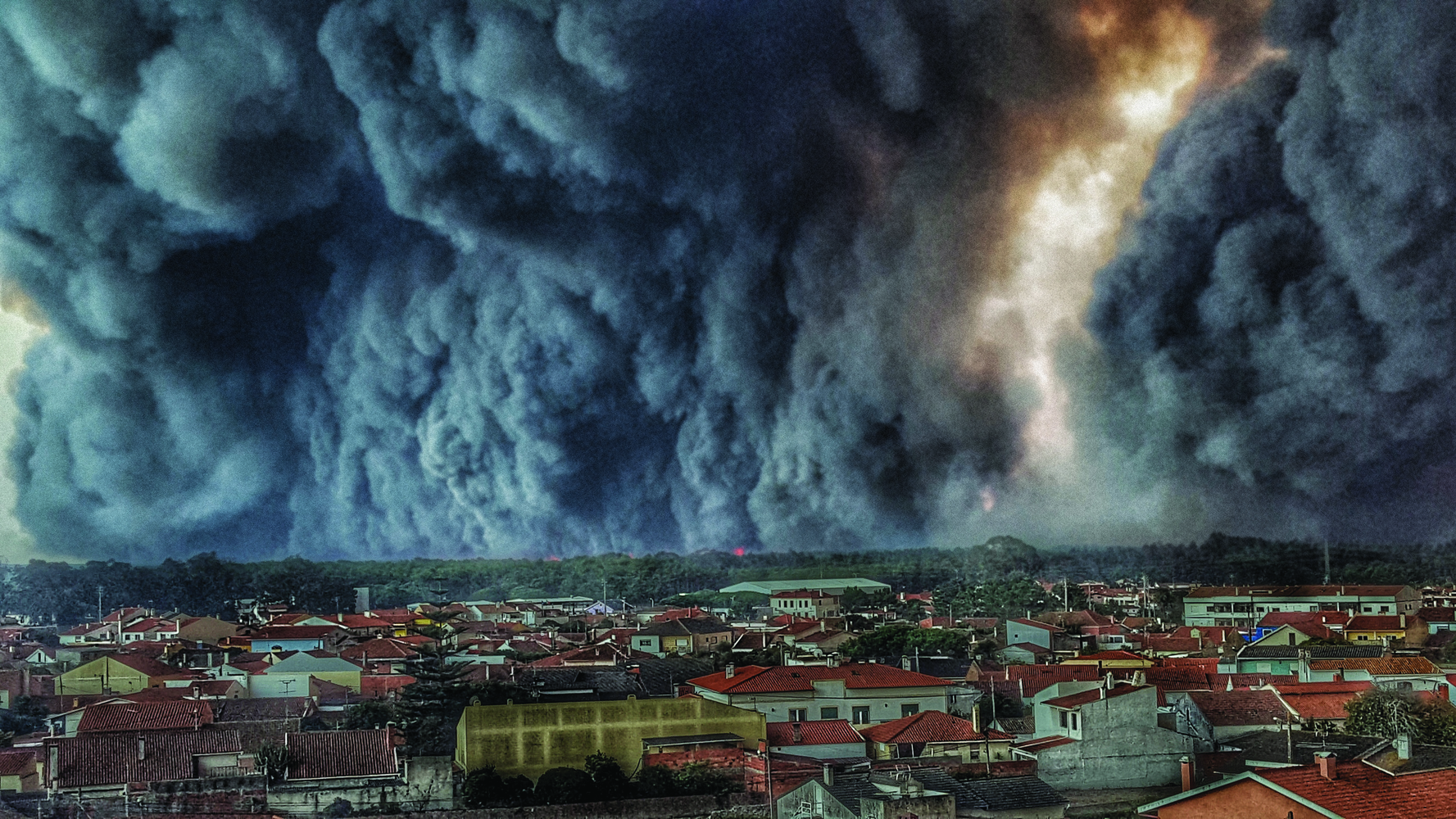 The Portuguese will remember 2017 for decades to come: the same amount of time it will take for the country to see green return to its lands. In just 24 hours, the Leiria Pine Forest (Pinhal de Leiria) or King’s Pine Forest (Pinhal do Rei), considered Portugal’s largest woodland, was burned almost completely. Little more than 1,500 hectares remain, out of a total of 11 thousand. While the pine trees were burning, 700 years of history went up in flames, and so did the future: between January and October, the country lost 418 thousand hectares of woodlands.

Those who were in close vicinity of the fires in that bleak year are adamant that it was arson, aided by the force of Nature. According to experts, trees will grow again with the help of the same tools with which they were felled. The seed of reforestation may very well be in the barren land. 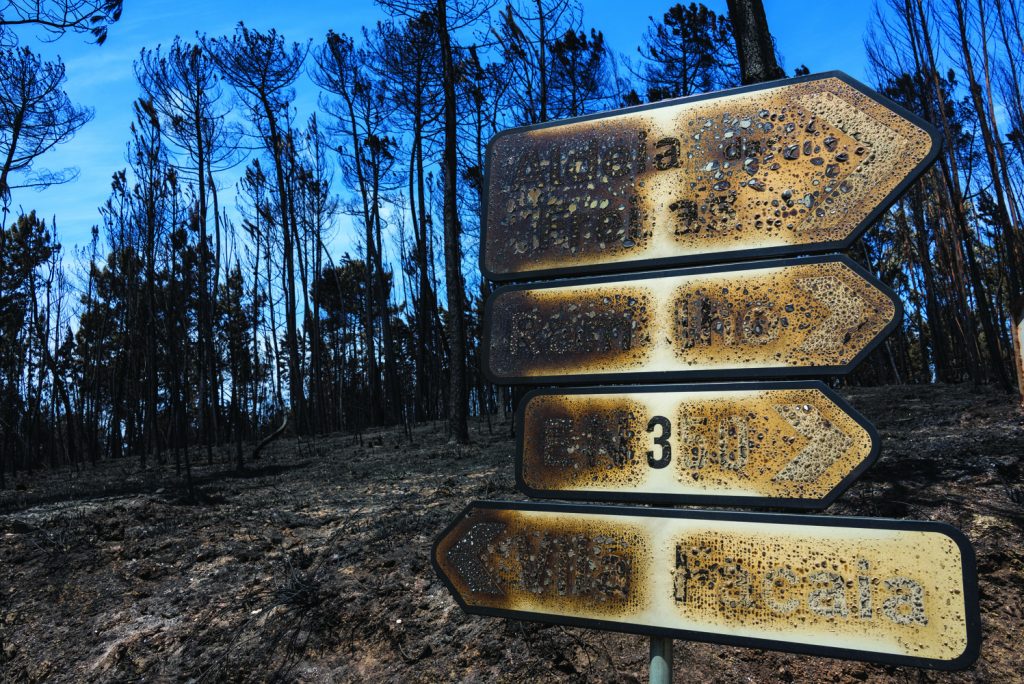 What burned were mostly thousands of maritime pine trees, the seed of the first trees planted during the reign of King D. Afonso III (13th century). The name “Pinhal do Rei”, however, is attributed to his son, D. Dinis, to whom the planting of the forest is still attributed. But it was his father who decided to sow one of the largest expanses along the coast. The purpose was to halt the degradation of the dunes and protect farmlands from sands carried by the wind. The woodland would also protect the city of Leiria and its castle. Whenever trees were cut down, new ones were planted in their stead.

The story of Pinhal de Leiria is also the story of the Portuguese Discoveries: the wood from the pine trees was used to build the carracks and caravels that “gave new worlds to the world”. For centuries, the pine forest contributed to the region’s economic development and demographic growth: shipbuilding, the glass industry, metallurgy, and products derived from the resin grew with the forest, and the wood was used as raw material and an energy source for industries and households. The forest survived the times, until the fire destroyed it. Will it grow again?

For centuries, the pine forest contributed to the region’s economic development and demographic growth: shipbuilding, the glass industry, metallurgy, and products derived from the resin grew with the forest.

The answer is unclear. Although maritime pine is considered a fast-growing tree (it takes between five to ten years to go from seed to seedling), it will take many more years for the forest to regenerate. Gabriel Roldão, self-taught researcher of the forest for over four decades, published the book “Elucidário do Pinhal do Rei” (Insight into the King’s Pine Forest) in March 2017 and, at the time, already argued that “the Portuguese Government should clean, maintain and cultivate the area” to prevent “a cataclysmic event”.

A premonition of what eventually happened a few months later. It is he who explains that a pine tree needs “70 to 75” years to be ready to be felled, but double that – 150 years – is required for a forest to operate in rotation and be economically viable. The pine forest will have to be planned and tended. Before the fires, it was divided into huge plantations – more than 340 – which are planted at the same time.

Only a few maritime pine trees remain in what is left of the woodlands – what was left unscathed belongs to the acacia and eucalyptus families. The risk was always there, after all: pine trees are fuel for fires, because of the layer of dried needles (leaves) which gather on the ground and the large amount of resin these trees produce, which, under certain conditions, can even be explosive.

In a single day and all at once, 3,000 bordaleira sheep died; the only breed that produces the milk used to make PDO Serra

In addition to pine trees, white heather, fern-shrub, narrow-leaved vetch, pink heather and rosemary also burned, as well as many other trees of public interest, such as eucalyptus globulus and serpentine pine trees. The reforestation of the pine forest is being studied and, despite the population’s desire to see trees grow again in the now burnt areas, it may include natural regeneration. Pinhal de Leiria is an adult pine forest and it is this ability to self-regenerate that technicians are counting on, given that planting in sand doesn’t work and sowing would be the process used. Time will tell: no one knows how the system will react after the fire. The seeds of parent trees will most likely repopulate the burnt area. It is in the strength of what remains that the future of the pine forest lies.

THE RESILIENCE OF NATURE

In addition to the human lives lost, the fire also claimed the lives and injured thousands of animals, from rabbits and hares, to otters, hedgehogs, foxes and badgers. Ravens are no longer seen, nor are crows or blackbirds heard; just some of the birds that inhabited the forest. On 15 October, thousands of heads of cattle died all at once. Three thousand bordaleira sheep alone were killed, the only breed that produces the milk used to make Serra da Estrela cheese, which determines the purity of the regional cheese with a Protected Designation of Origin (PDO).

According to producers of the region, only 25% of the flocks survived the calamity and they estimate that the production of Serra da Estrela cheese will fall by 90%. In 2016, Estrelacoop – Cooperative of Serra da Estrela Cheese Producers, recorded approximately 200 thousand tonnes of cheese and curd, and it affirms that it will be difficult to produce 20 thousand in the next campaign. The extreme drought is said to be the main culprit: there are fewer pastures for the animals, and the intense unrelenting heat, ignited and fed the fires. For the bordaleira sheep, the destruction of the green landscape means the loss of their food source: unlike other sheep, these don’t eat hay or feed, but rather heather, rosemary and other shrubs which were burnt. 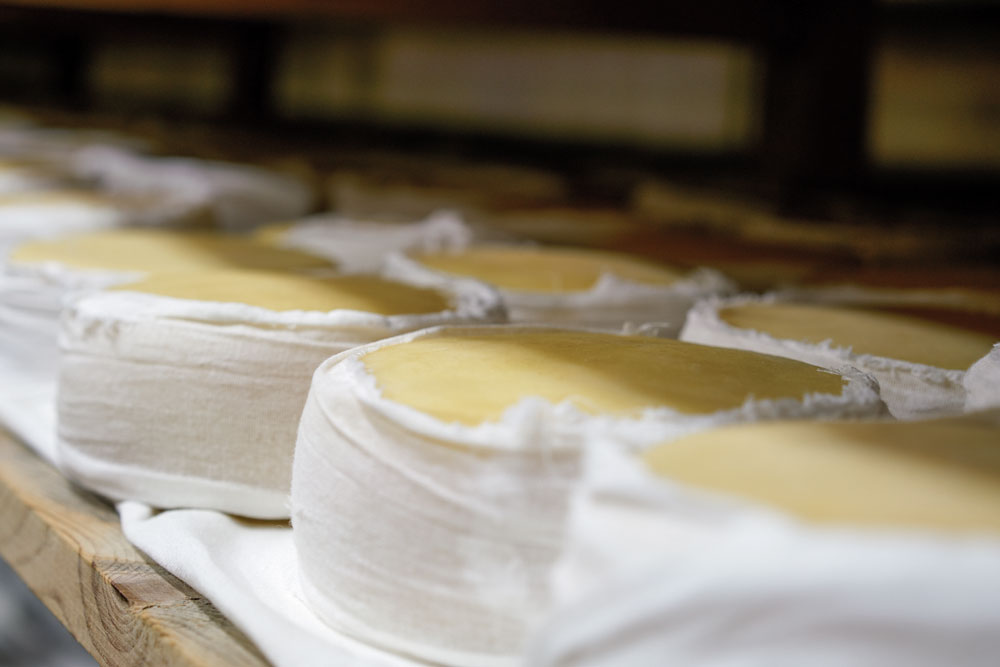 Cycling for a cause
@ Jerónimo Martins

Cycling for a cause @Jerónimo Martins
Salicornia, Treasure of the Modern Kitchen
The Bison of White Tower
Picking Mushrooms in Poland
Force of Nature