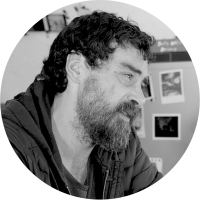 He was born in 1970 and began his career in 1985 as a cartoonist for newspapers such as “Público”. In 1991, he became an illustrator, designer and creative artist at the agency Team Protasio, now Young & Rubicam. He was a pioneer in Portugal, in creating a post production department in the 3D animation sector, and in creating Portuguese applications for iOS. Nowadays, he works as a freelancer and recently created the iBook for children called “O Nosso Sistema Solar” (Our Solar System).