12 Jul Beneath the Glow

Rare among plants and animals that live on land, the ability to generate light is much more common underwater, where three quarters of the living beings are bioluminescent. These organisms produce their own glow as a tool to attack, defend or mate, creating a unique spectacle of radiant colours. 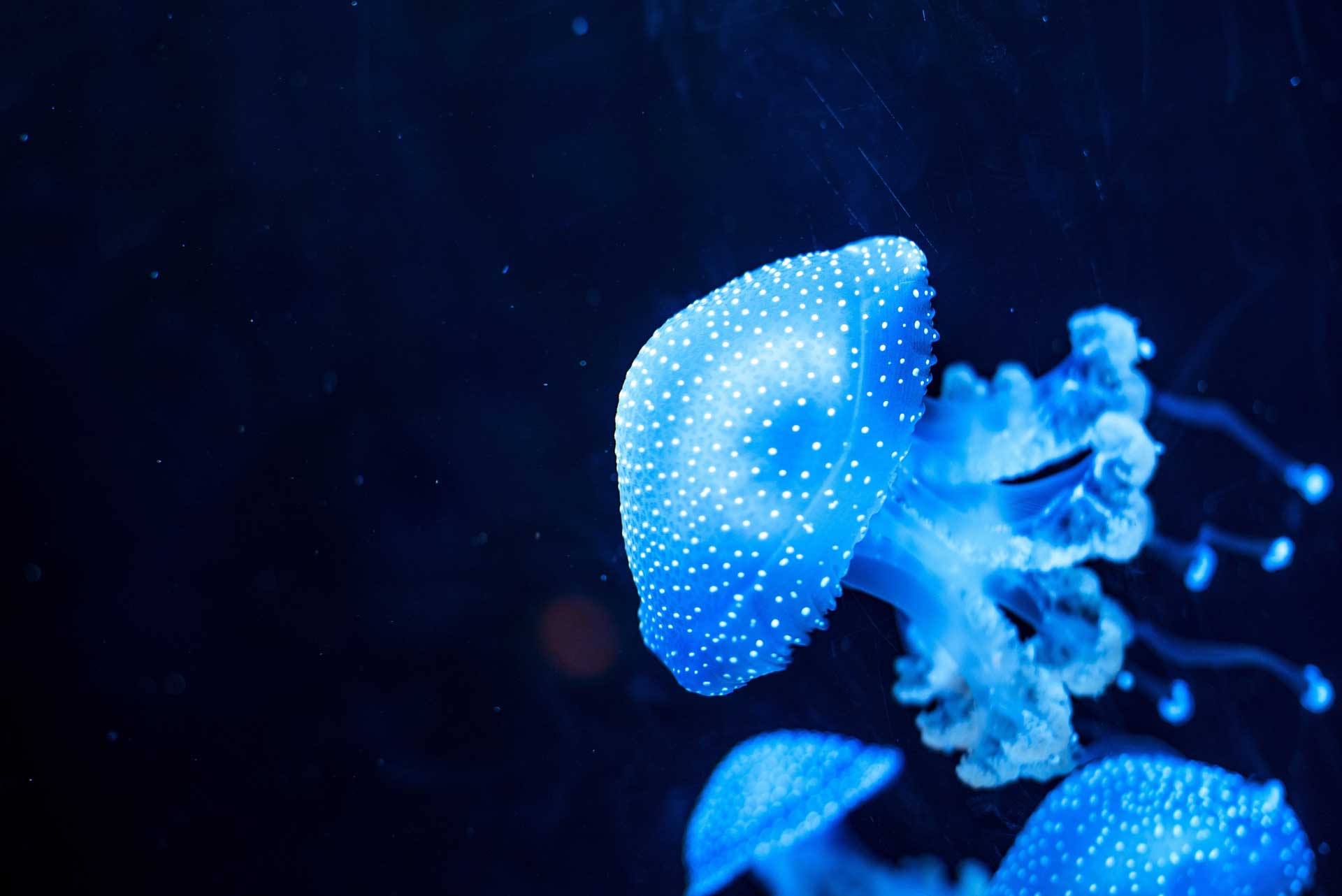 Jellyfish that light up in an electrifying dance, fish with eyes that become flashlights, light-blue waves of phytoplankton that replicate starry skies. Celestial bodies with their own light, bioluminescent beings that glow in the darkest depths of another solar system, the ocean floor. Despite only being understood and named at the end of the 19th century, these fancy neon lights have, in themselves, been a unique and beautiful phenomenon since the beginning of time. Shakespeare didn’t put much thought into naming it because Art has the power to create and shape its own Science and, so, he referred to the Bioluminescence of the glow-worms in Hamlet (1609) as “uneffectual fire”.

What escapes our poetic gaze is that what for us mere mortals is a display of intense colour is, in fact, an essential part of the lives of animals and plants born with this trait. The cold light they reflect both attracts prey and helps them escape from predators, and it aids in communication and courtship. Rare in land organisms and practically non-existent in freshwater – because of its turbidity and diminished biodiversity –, bioluminescence is quite common in the ocean and the deeper one dives, the greater the sea of light we’ll find: Three in every four marine animals are bioluminescent. 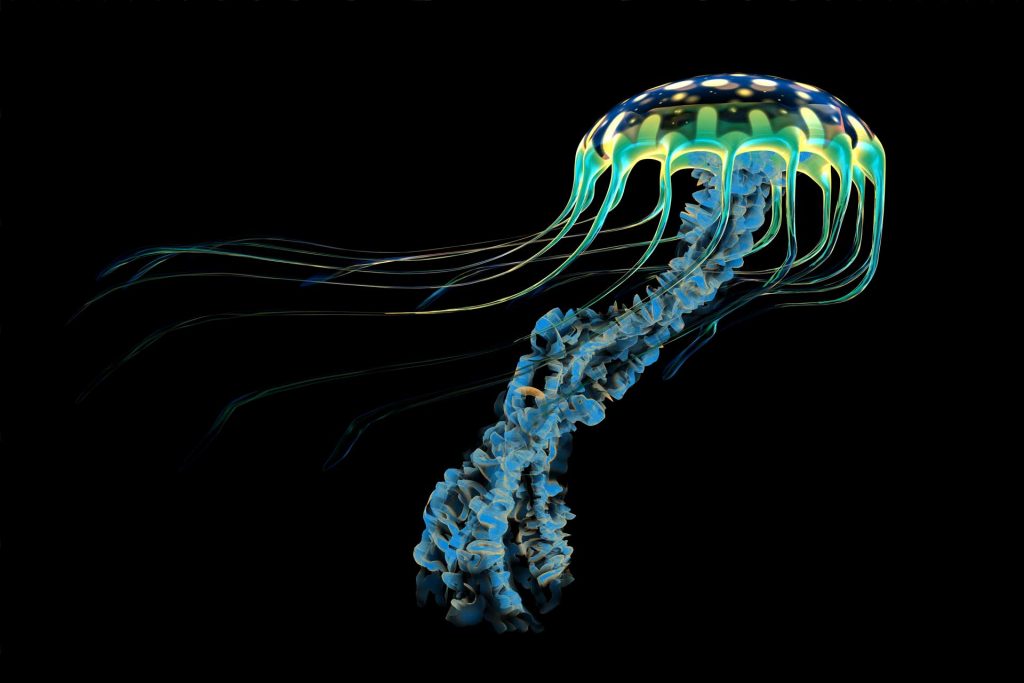 Crystal Glow
More than half of all jellyfish species produce some kind of bioluminescence, largely as a deterrent to predators. They light up the ocean mostly in blue, which is the colour that travels more in seawater.

In most cases, the process requires a light-emitting pigment, luciferin, and an enzyme, luciferase. The interaction of the latter with oxidized luciferin creates a by-product known as oxyluciferin. That by-product is the bright light emitted by bioluminescent creatures. The organ used by many deep-sea fish and cephalopods is the photophore, usually placed on the ventral and lateral surfaces of the bod. Sometimes, species that do not synthetize luciferin take in bacteria or other bioluminescent creatures so they can light up.

The same way that not everything that glitters is gold, not everything that glows is bioluminescent. Some organisms, such as corals, just fluoresce. This means they absorb light at one wavelength, such as UV radiation, and emit it at another wavelength. Something very similar happens with the ink used in highlighter pens or in glow-inthe-dark stickers.

WHAT COLOUR IS BIOLUMINESCENCE?

Whereas most terrestrial organisms, like fireflies, have a yellow bioluminescence colour, most of the bioluminescence produced in the ocean is in the form of blue-green light. This is because light traveling from the sun of longer wavelengths—such as red light—doesn’t reach the deep sea. Though, some animals, such as the Dragonfish (Malacosteus), have evolved to emit and see red light to gain the ability to detect red-coloured prey and show them to other dragonfish. Few organisms can glow in more than one colour. The glow-worm may be the most familiar exception. Its head glows red, while its body emits a fiery green light through eleven pairs of spots arranged in two rows, resembling the windows of a miniature train at night. Because of that, these beetles are often referred to as railroad worms. 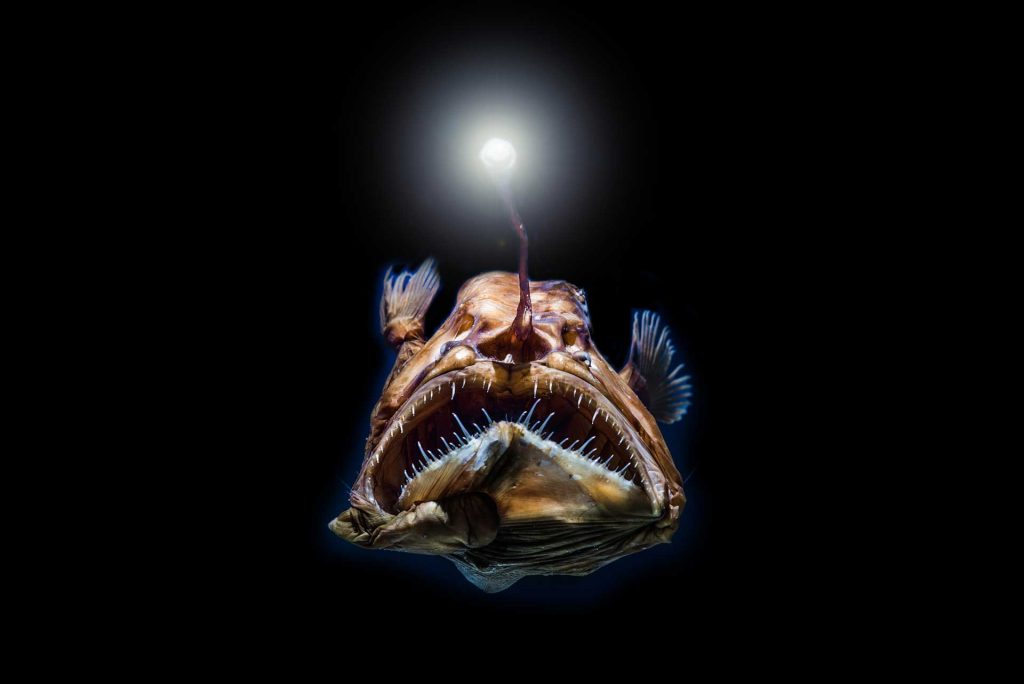 The ang…ry Show
Up to a mile below the surface of the Atlantic and Antarctic oceans, there are more than 200 species of this angrylooking fish. It is called the “Anglerfish” due to the anglinglike rod in the first spine of its dorsal fin

WHY DO ORGANISMS GLOW?

Bioluminescent animals and plants use their gift for a variety of reasons. Some do it to lure the opposite sex for mating or to search for prey. The most famous predator to use bioluminescence may be the anglerfish. It has a huge head and sharp teeth. On the end of its head, there is a long, fleshy growth and a ball (called the esca) that this angry-looking fish can turn on. Attracted by that lantern, the prey swim in for a closer look and, by the time it sees the razor-toothed jaws of the anglerfish, it is too late. Nemo and Dory had better luck in the Disney film that made this nightmare-inducing creature famous.

Often animals use light to confuse and scare off predators. That tactic is very common in marine invertebrates. Brittle stars, for instance, can detach their glowing limbs to distract the predator from their main body. Sometimes, when animals break off the luminescent parts of their bodies, they detach them onto nearby fish. By doing that, some species of sea cucumber crawl away, while their predators follow the glow on those fish.

Many predators, such as sharks, hunt from below. They look above and take advantage on the shadows sunlight creates beneath prey. In response to this predatory behaviour, a lot of marine species use a camouflage technique called counterillumination. Their photophores point downward, adjusting the amount of light coming from there to match the light that penetrates from the surface. The hatchetfish, which gets its name from the distinct hatchet-like shape of its body, is a great example. The Cypridinid ostracod, a tiny crustacean found only in the Caribbean, uses bioluminescent signals on the upper lip to attract females. About an hour past sunset or later at night after moonset, males swim into the water column and release coded blue trails of luminescent pulses that seduce females. Each ostracod species has a unique light pattern.

Despite being known to Aristotle and having been studied by notables as Francis Bacon and Robert Boyle, bioluminescence was not explained until 1887. That year, French physiologist Raphaël Dubois extracted juice from clams that were graced with light and discovered two substances which, when mixed, were responsible for the glow. He named luciferin after “Lucifer”, a Latin word which means “light-bringer”, and called the other luciferase to indicate that it had the properties of an enzyme.

Shortly after, the research on Bioluminescence was popularised by U.S. zoologist and physiologist Edmund Newton Harvey (1887- 1959), acknowledged as one of the leading authorities on bioluminescence. He is the namesake of two kinds of glowing bacteria – Achromobacter harveyi and Vibrio harveyi – and a species of firefly – Photinus harveyi. In 1922, he built a heat-less reading lamp using luciferins from dead crustaceans.

FISH, SQUID, JELLYFISH, SEA SLUGS. A DAZZLING RANGE OF CREATURES HAVE THE ABILITY OF GLOWING IN THE DARK. 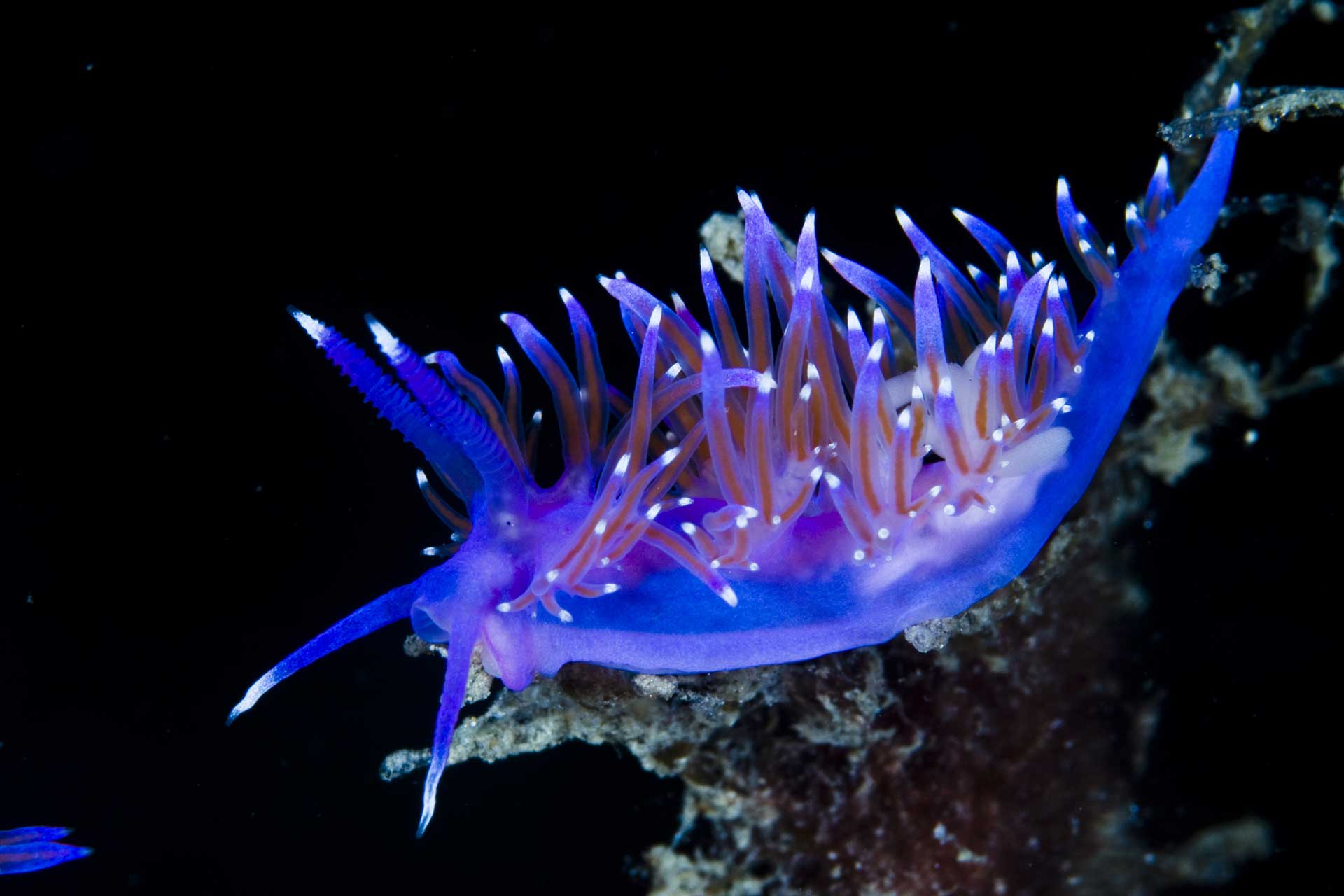 There are more than 2,000 known species of nudibranch throughout the world’s oceans, though they are more abundant in tropical waters. Some species of these shell-less mollusks, part of the sea slug family, are bioluminescent. Here is an example of nudibranch of the genus Flabellina. 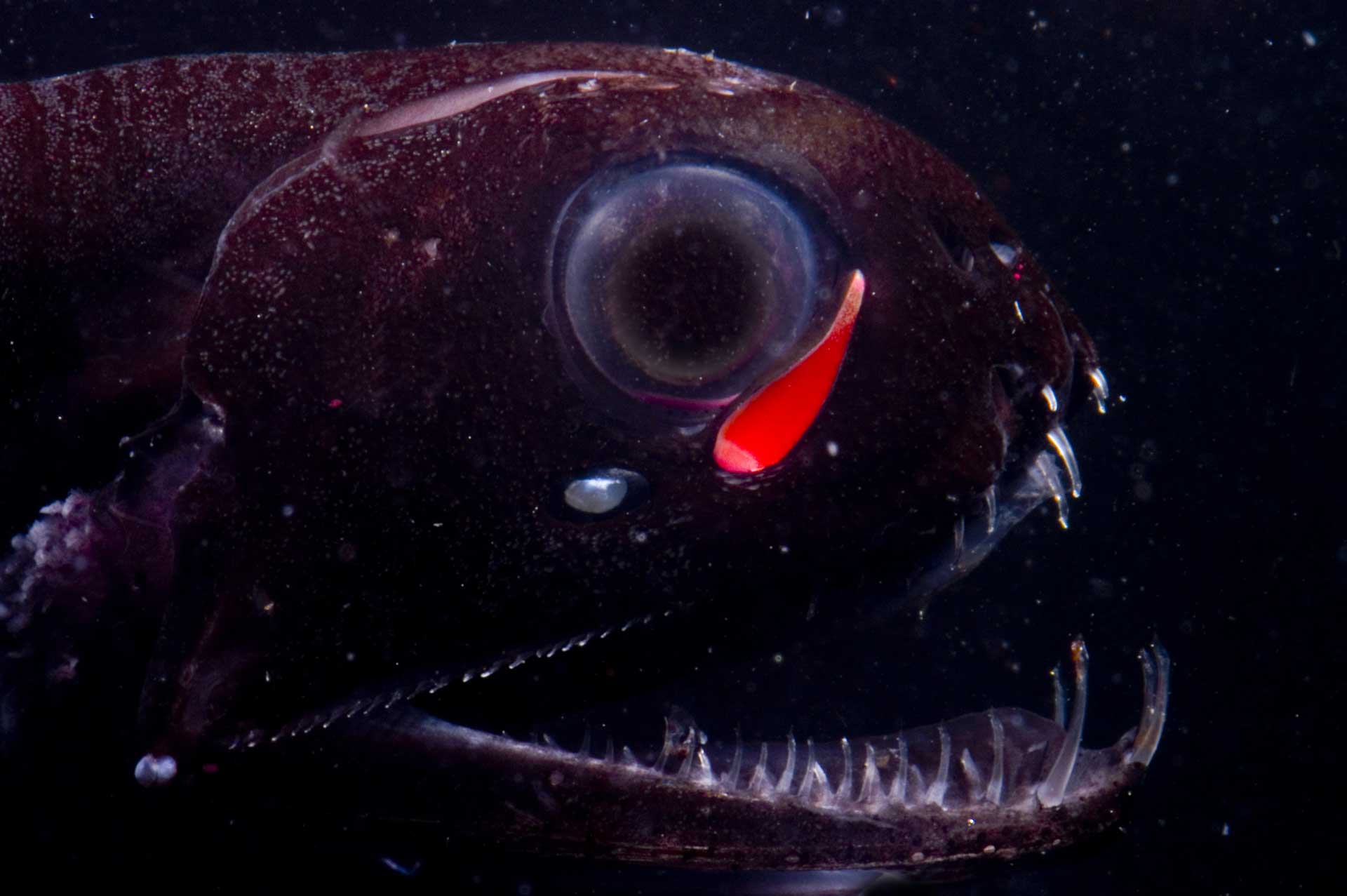 In addition to the blue bioluminescence typical of most deep-sea animals, three genera of deep-sea loose-jawed dragonfish also produce far-red light and shine it ahead, like a spotlight. These fish use their flashing lights to attract prey and signal potential mates. In spite of their gruesome appearance, they only measure about 6 inches (15 cm) in length. 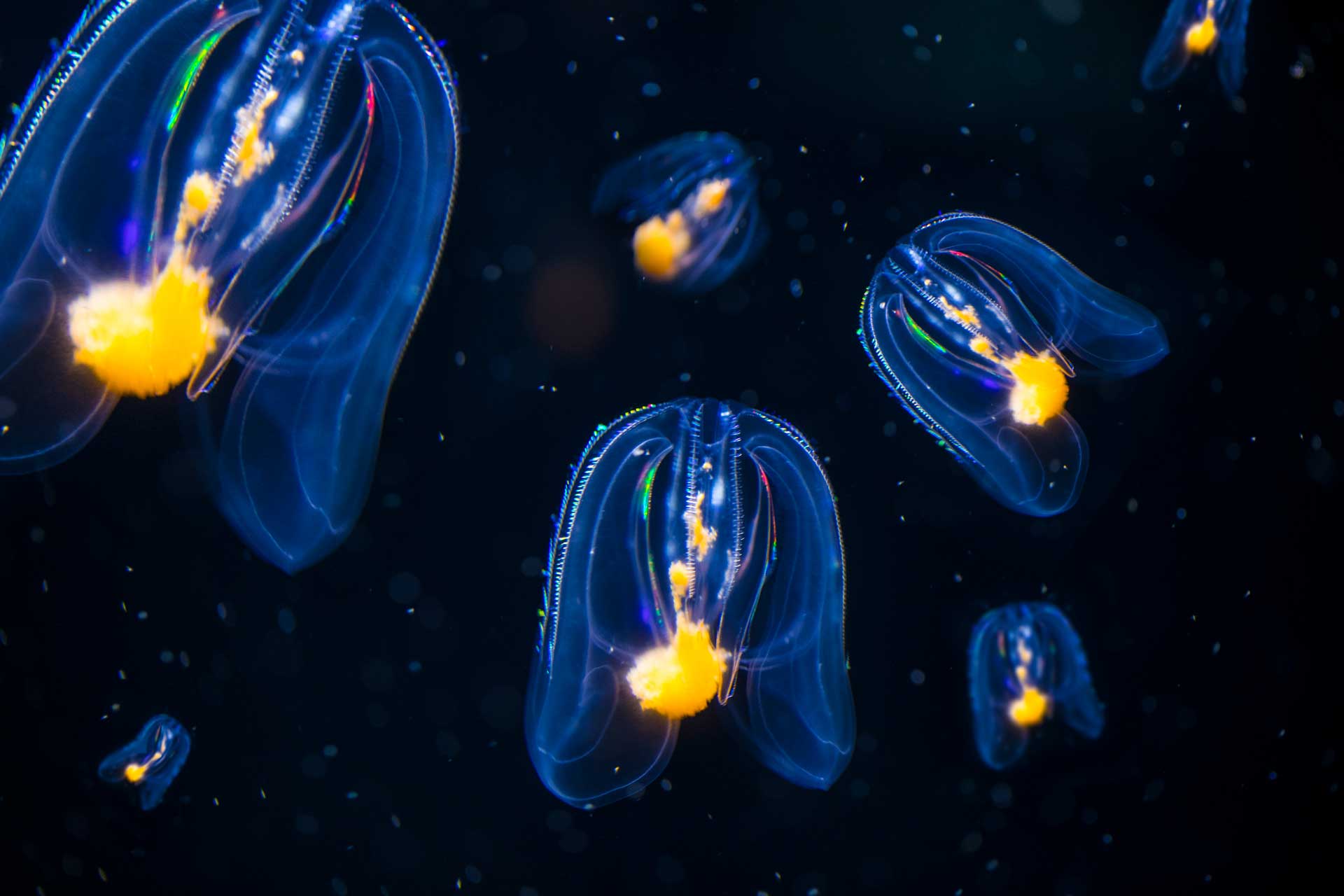 Many ctenophores, like other planktonic organisms, are able to bioluminesce. These gelatinous animals often mistaken for jellies look like luminous prisms when they spread waves of colours in the ocean. And as they move, their eight comb rows scatter the light producing a beautiful rainbow effect. 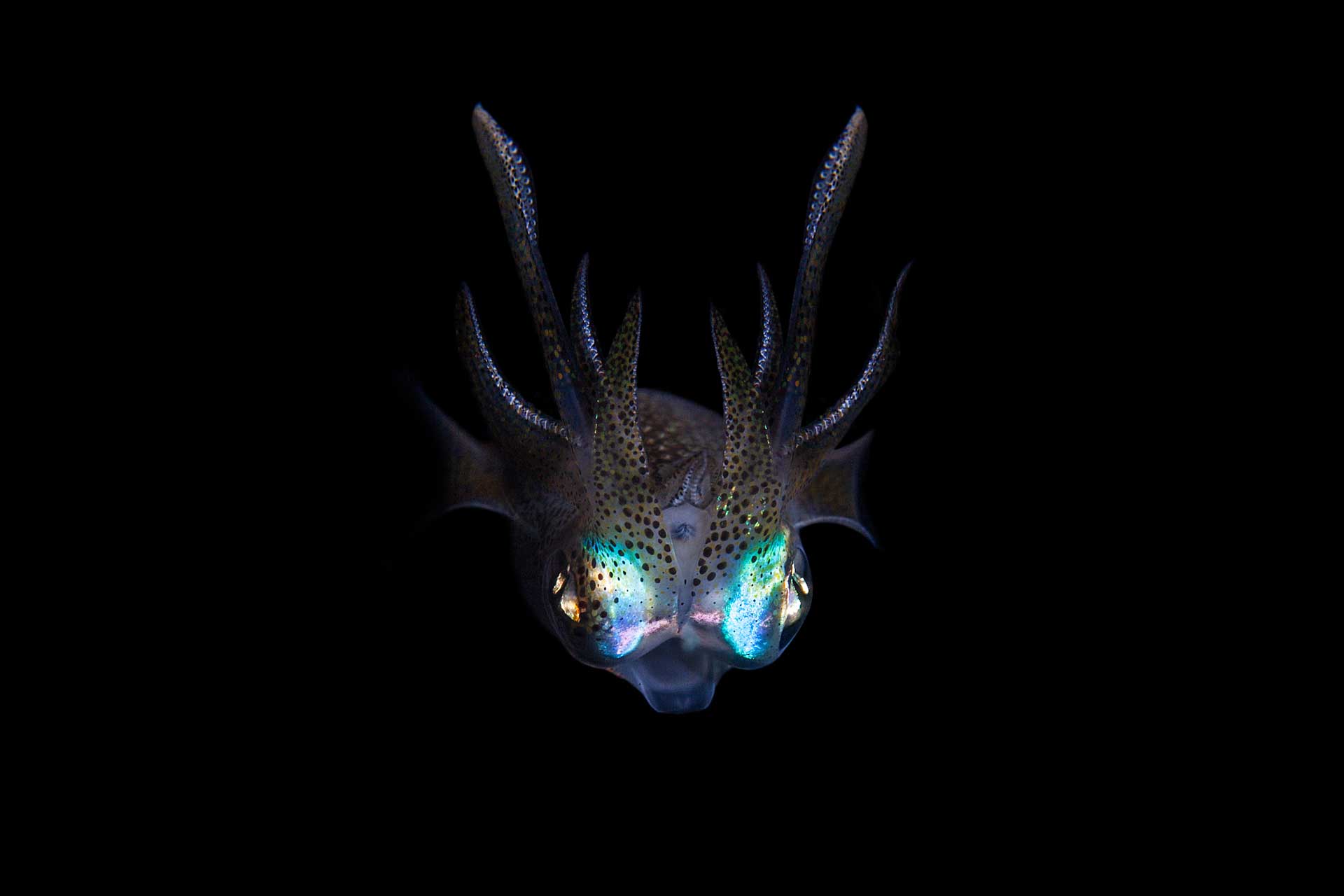 Hidden in the sand by day, this adorable tiny squid houses bioluminescent bacteria on its underbelly and uses it to mimic the moonlight, making its silhouette less visible to predators lurking below. This method of camouflage is an example of counter-illumination. 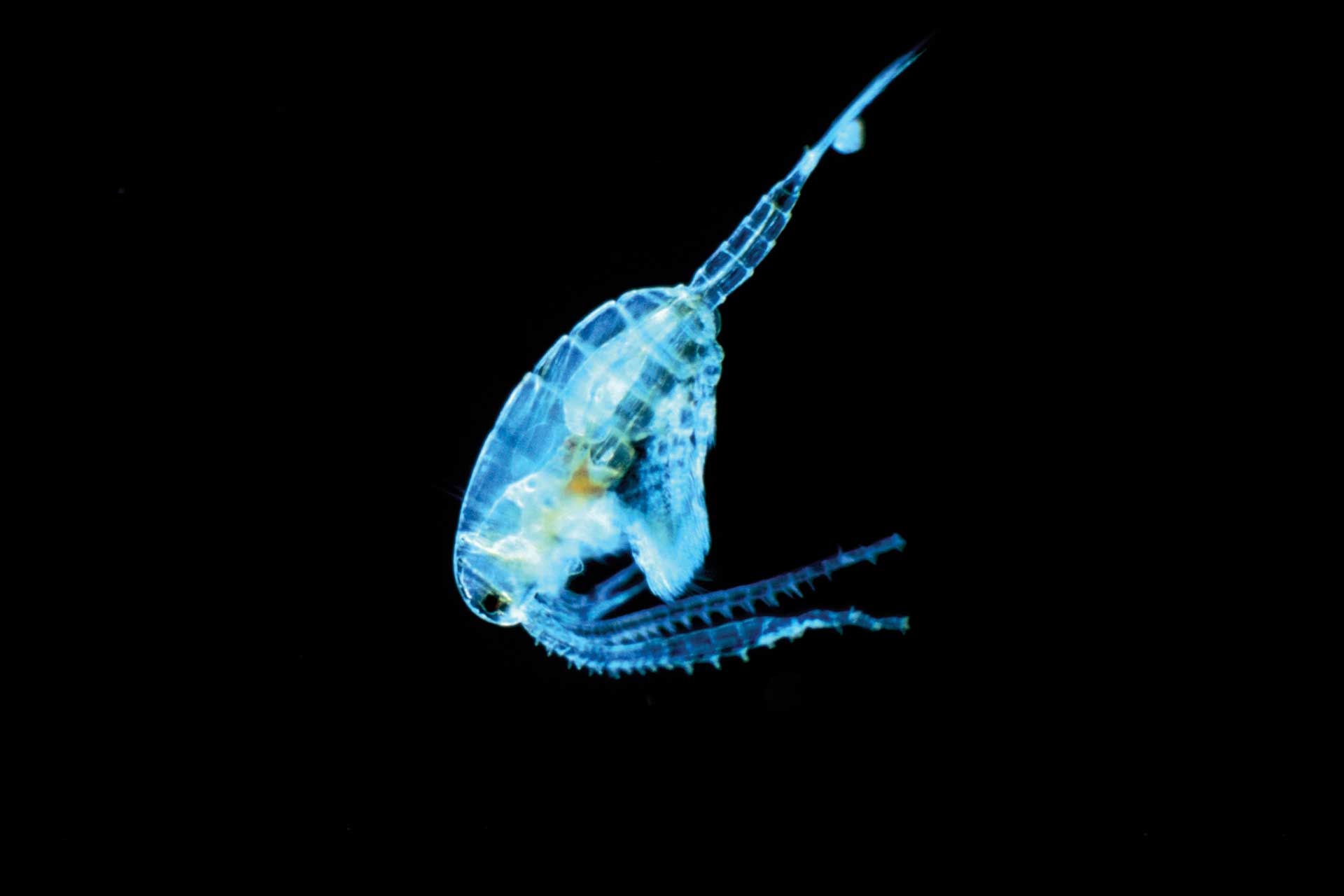 Despite measuring around two millimetres in size, these minuscule crustaceans are of great importance in the earth’s marine ecosystem, providing food for many species of fish. The bioluminescent chemicals they release into the water produce a glowing cloud of light. That bright smoke is used to distract or blind attackers.

There’s a Light that never goes out
Glow: Animals with Their Own Night-Lights
Reduce, Reuse, Recycle, Rethink
Trash in the deepest Place on Earth?
Oceanário de Lisboa