15 Jul The magic of the light of Lisbon

The magic of the light of Lisbon

What makes the Light of Lisbon so unique? Professor of Physics Ana Maria Eiró reveals some of the secrets behind the magnificent city lights. 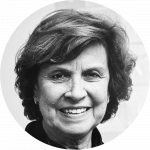 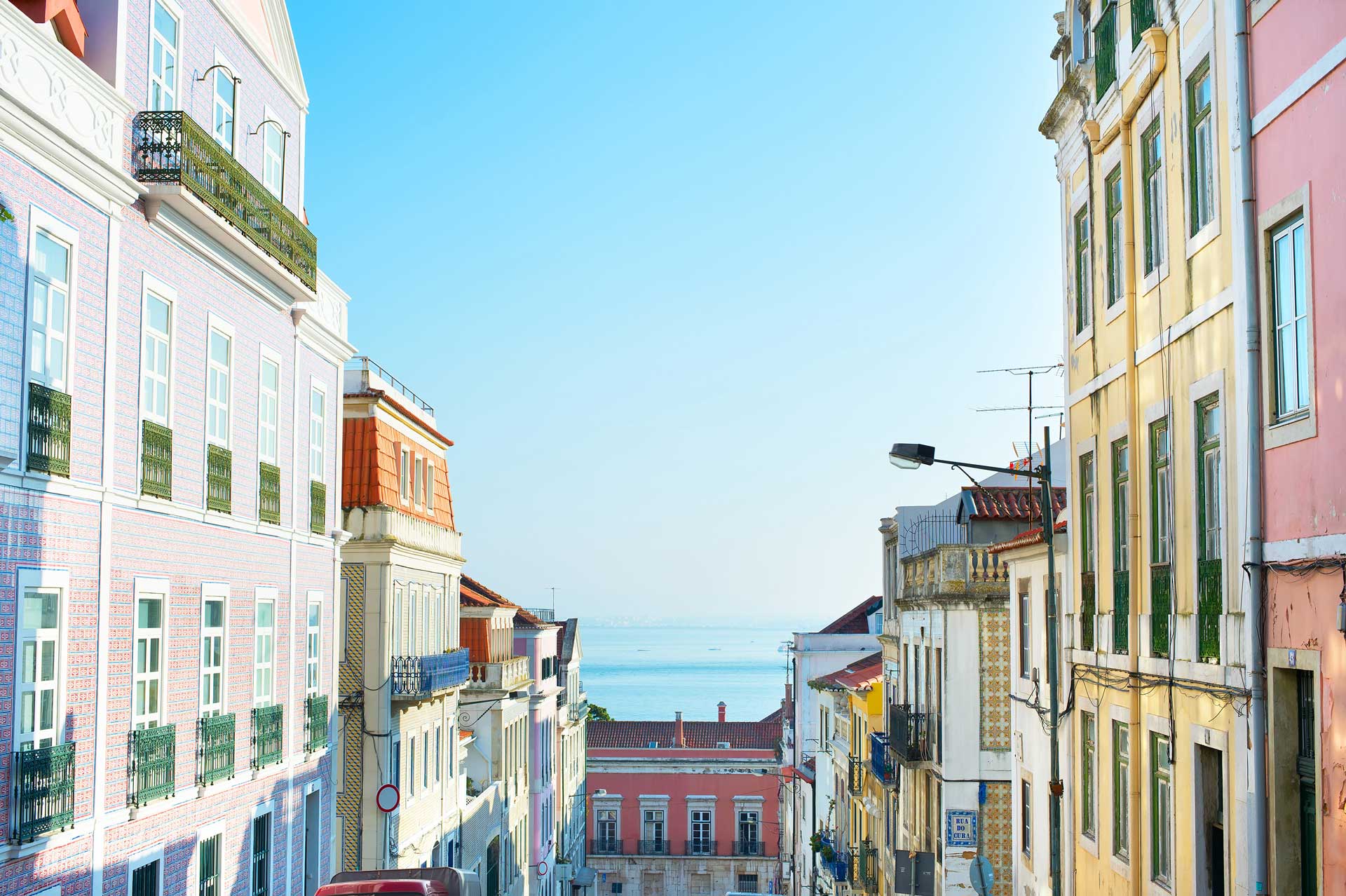 Widelyconsidered as the immaterial icon of the city, the light of Lisbon has been celebrated by poets and writers, painters and other artists, as well as captured by the most renowned photographers and filmmakers. But what makes this light so special? The beauty of the light of Lisbon arises from a multiplicity of phenomena that converge to create a unique ambience: from the number of hours of sunshine to the clearness of the days due to dominant winds; from the construction materials to the very geography of the city, opening up at south to the Tagus river that reflects light all day long. Light comes from the sun, our star and source of natural light. It is a form of energy that propagates as electromagnetic radiation, like microwaves, infrared, ultraviolet or X-rays.

Due to the nature of our eyes sensors – the rods and the cones – we only detect a very tiny part of that spectrum – the visible light – characterized by a wave-length λ or by a frequency ν that is proportional to the energy of the light beam. We can only see wave-lengths between 390nm (3,9×10-7m), which is violet, and 750nm (7,5×10-7m), which is red. Although it is perceived as white, visible light is composed by many colours, as we can observe in many atmospheric phenomena like the rainbow. The several colours of the sunlight interact differently with the air, water and dust molecules of the atmosphere. Light with a shorter wavelength, as blue, is more likely to collide with these molecules and therefore blue is the most dispersed colour. Red light, with a longer wavelength, runs through the atmosphere molecules almost without deviatingand, thus, red is the most transmitted colour.

The longer the distance travelled by the light through the atmosphere, the more blue light is deflected and the more red light is transmitted. That is why the sky looks blue and why at dawn and at sunset the light is reddish. Sunrays cross about 800 km in the atmosphere at a grazing incidence, and only about 50 km at a vertical incidence, when it is noon. Lisbon, being in the South Western part of Europe at 38°N, has a considerable number of sunshine hours per year, not only due to its latitude but also because of its cloudiness. On average, Lisbon has about 65% more hours of sunshine per year than Paris (48°N) or Berlin (52°N), 75% more than London (51°N), only 3% more than Madrid (40°N) and about the same as Athens (38°N).

The quality of the radiation can also be quite different, as it is directly related to its geographical position on the Atlantic cost and to the dominant winds. The directions of the prevailing winds at large scale are determined by the main climate regulators in Portugal and the high and low pressures centres situated on the Northern Atlantic – the Azores subtropical anticyclone and the Iceland subpolar low – that vary over the years and throughout the seasons. These main centres of action regulate the winds, that blow in Portugal all year round. In the spring and in the summer the winds are much stronger, blowing predominantly from North and Northeast, as we experience in the Lisbon area. 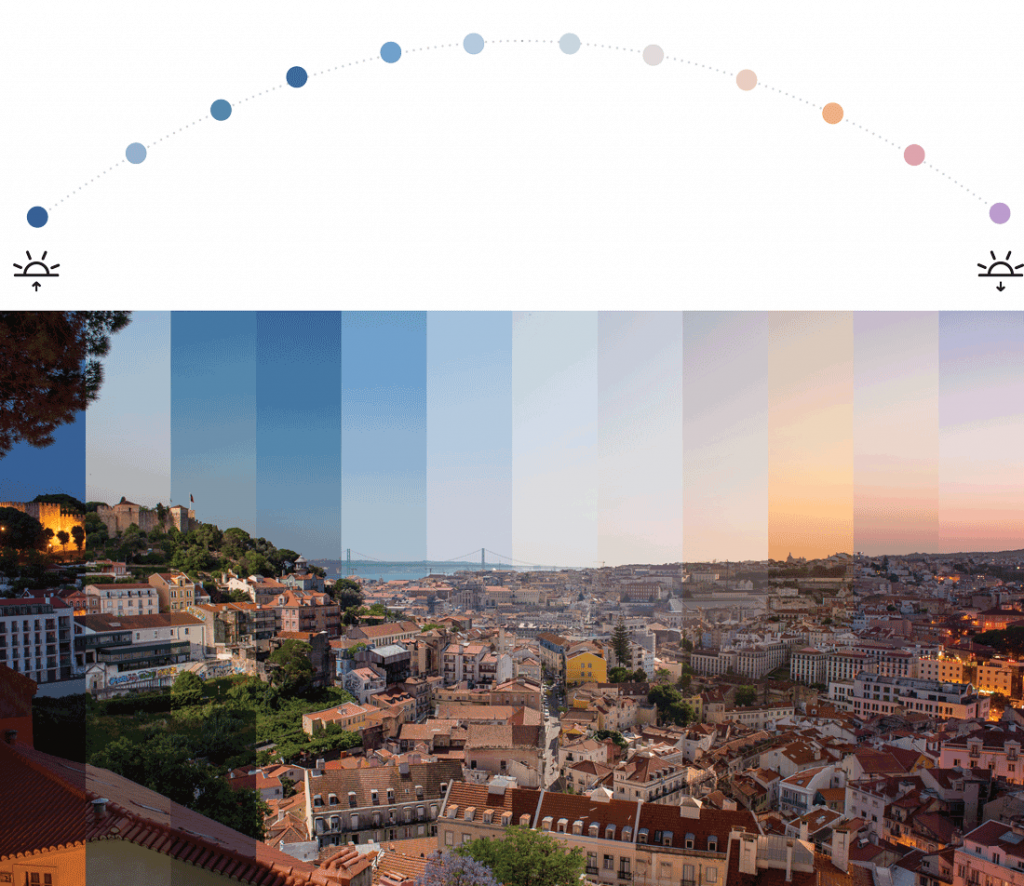 From the lightness of dawn to dusk, from sunrise to sunset, Lisbon’s skies celebrate a festival of unique colours.

These Northern winds are often associated with polar air masses that clean the air and provide conditions for a very clear atmosphere, giving rise to very bright days with exceptional visibility. Furthermore, from dawn to sunset, that brightness is particularly enhanced by the river, which flows almost east to west, close to the old part of the city.

The type of the constructions and pavements is also a very important feature. Lisbon is built with light coloured materials, which reflect and scatter the light, making it more intense. There is abundant white limestone, tiles in facades, and buildings in lioz stone. Beneath the traditional orange roof tiles, the houses are painted in pink, yellow and ochre, the so-called warm colours, sitting on a pavement mainly of Portuguese cobblestone.

BERNARDO SOARES (FERNANDO PESSOA), IN “THE BOOK OF DISQUIET”

All these materials and colours, different from other European cities, contribute to the softness of the light. But the city of seven hills, also hides other effects, because these elevations act as a light amphitheatre facing the river, which helps concentrating the solar radiation. In fact, if we represent the topography and the buildings of the city by a simplified model in a shell form, which collects and reflects the light from the sun, we can see that it fits perfectly to the down town area of the city, allowing us to understand how the surrounding hills contribute to the concentration of light in the valleys.

The enchantment of the light of Lisbon is therefore the result of a subtle combination of a wide variety of factors, from the nature of solar radiation and the meteorological effects to the topography of the city and the materials used in its buildings. Hills opening into valleys that flow into the river favour light dispersion and reverberation in the warm coloured houses, and intense reflections in the water mirror at south. For those passing by, or for those who live here, the magic of the light of Lisbon is a reality that bewitches and should definitely be enjoyed.

This article is part of the “The Unique Light of Lisbon” feature.