15 Dec António Guterres: “A Strong impulse to do something”

António Guterres: “A Strong impulse to do something”

António Guterres replaces Ban Ki-moon and takes the UN office on January 1, 2017. Among his top priorities are the civil conflict in Syria which has lasted for almost six years. 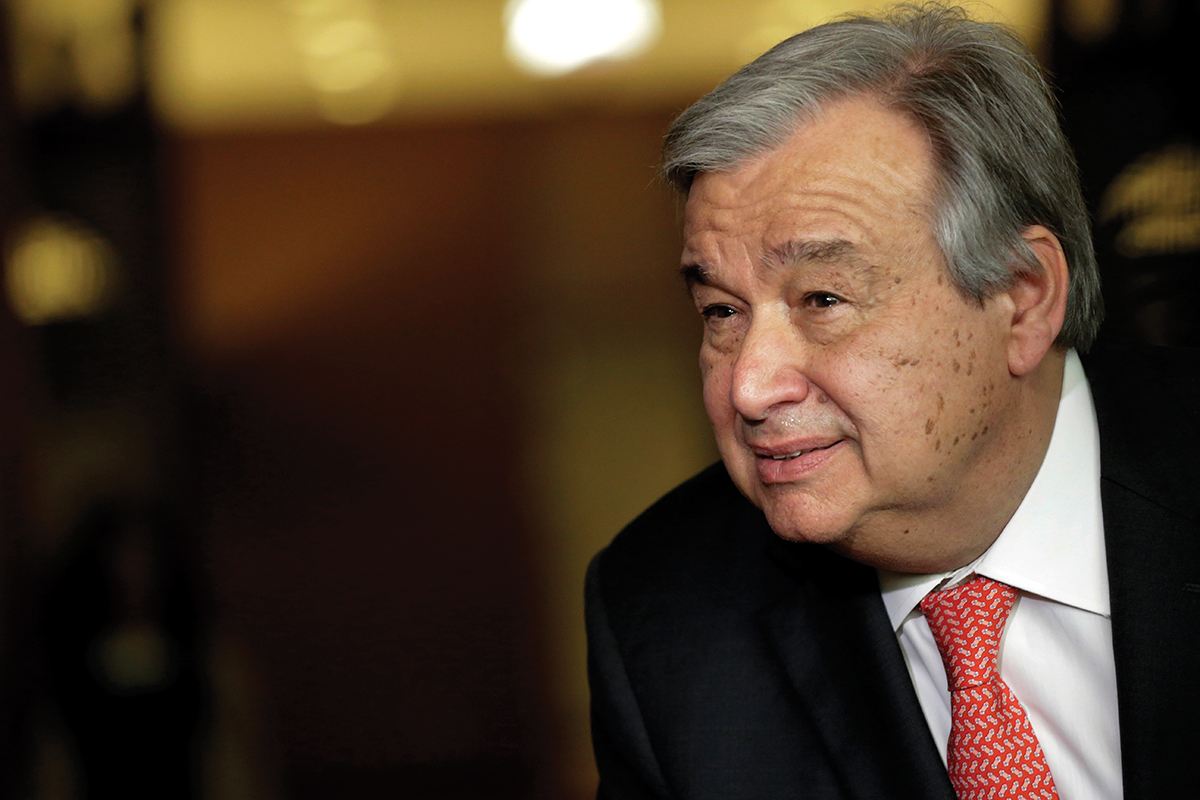 António Guterres replaces Ban Ki-moon and takes the UN office on January 1, 2017. Among his top priorities are the civil conflict in Syria which has lasted for almost six years resulting in the death, so far, of 300,000 to 470,000 people, according to the United Nations’ figures, and the refugee crisis. “Having worked with the most vulnerable populations in the world, those who have been the most victimized by all these conflicts, it is inevitable to feel a strong impulse to do something, not only to help refugees, but above all to prevent refugees. And this has to do with diplomacy for peace”, Guterres said shortly after his acclamation. “Great progress has been made on sustainable development and its goals, great progress has been made on the Paris Agreement (…). But if anything the international community has failed, it has been about peace and security”, added the new UN Secretary-General. The fight for gender equality will also be one of its priorities. “I have long been aware of the struggle that women face at work only because they are women, the violence they are exposed to during conflicts only for being women”, said Guterres, pledging to continue his work in this area. “This remains my commitment.”

António Guterres was pronounced UN Secretary-General by acclamation on October 6. In his first official statement following the decision by the Security Council, the former Portuguese prime minister said he only had two words to describe what he was feeling: “Gratitude and humility”. “I must say that I am fully aware of the challenges the UN faces, the dramatic problems of today’s complex world can only inspire a humble approach”, Guterres said, adding that “the real winner is the dignity of the United Nations”. UN Secretary-General-designate António Guterres speaks during the ceremony for the appointment of the SecretaryGeneral at the United Nations – New York – in October 13, 2016

Federica Mogherini, the High Representative of the European Union (EU) for Foreign Affairs and Security Policy, congratulated Guterres for being indicated as the favourite for the position of Secretary-General of the United Nations Organization (UNO), describing him “as a good friend, man of vision, heart and action”.

“He is a pride for Europe”, wrote Martin Schulz, president of the European Parliament, on his Twitter account. Louis Charbonneau, the United Nations director at Human Rights Watch, said that by choosing him as the new Secretary-General, the Security Council “chose a defender of refugees with the potential to strike a radically new tone on human rights at a time of great challenges”. In the run for leadership, Marcelo Rebelo de Sousa, President of the Portuguese Republic, named him as “the best of us all”. “His entire candidacy, right from the very moment it was launched, was based around a firm declaration of his independence, his integrity, his capacity for dialogue and for building bridges, as well as a strong view of the multilateralism and irreplaceable role of the United Nations in regulating a globalised world”, wrote Jorge Sampaio, former President of the Republic.

Left behind was the long and slow process for assessing the candidates for the position, who were subject to a total of six straw polls. The last one took place the day before the acclamation of Guterres as the new Secretary-General and it was known, for the first time, the way the five permanent members of the UN Security Council were to vote: China, United States, France, Russia and United Kingdom. Guterres won with 13 votes in favour, two abstentions and no veto.  “Today we have a clear favourite and his name is António Guterres”, Vitaly Churkin, Russian ambassador at the United Nations then said. Guterres was finally reaching the position he had always aspired to, say those who know him well.

“I am fully aware of the challenges the UN faces, the dramatic problems of today’s complex world can only inspire a humble approach”

TAKING THE BARE-FOOT SIDE FROM THE VERY START

António Manuel de Oliveira Guterres was born in 1949, in the civil parish of Santos-o-Velho, in Lisbon, during times “of poverty, with people in difficulties and bare-foot”. That “very strong, very tough” reality, would contribute “decisively” towards him later working “in politics and having socialist ideas”, he remembered in an interview in 2002. He started off by getting involved in movements doing social work linked to the Church. He majored in Electrical Engineering from the Instituto Superior Técnico in Lisbon, having made his mark as a brilliant student.

He was an activist with the Juventude Universitária Católica – Catholic University Students Organisation – president of the Centro de Ação Social Universitário, an association responsible for social development projects in underprivileged neighbourhoods in Lisbon, during the 1970s; he attended training sessions and retreats of Opus Dei and Mocidade Portuguesa – Portuguese Youth Organisation-; he was a member of the Grupo da Luz – a forum where people reflected on the Council and on the social and political life in the country – and he founded DECO, Associação Portuguesa para a Defesa do Consumidor (Portuguese Consumer Rights Association).

“He is always fighting the good fight and cares for the people. he’s very effective and a strong leader” Angelina Jolie and António Guterres arrive at a refugee camp in the Southeastern Turkish city of Kilis, to meet Syrian refugees, on September 13, 2012

In 1973 he joined the Socialist Party (PS). His rise within the PS would begin in 1991, when Aníbal Cavaco Silva, former leader of the Social Democrat Party (PPD/PSD), won the general elections by an absolute majority, with a result that is still today the best ever by the social democrats. “These results leave me in a state of shock”, António Guterres said at that time.

The next year, he was elected Secretary-General of the PS and began his path to Government, winning the elections in 1995. In 1999, after standing out internationally because of the battle for a referendum for the independence of East Timor and having founded the Portuguese Council for Refugees, António Guterres was invited to be president of the European Commission, but he declined. In “António Guterres – Os Segredos do Poder” (“The Secrets of Power”), Adelino Cunha, the author of the biography published in 2003, writes that the former Portuguese prime minister declined the invitation due to the death of his first wife, Luísa Guterres, the mother of his two children. Years later he would confess: “If there is one thing that was really difficult for me to refuse, it was the European Commission”. In 1999, he was invited to take up office as president of the Socialist International, a worldwide organisation of social democrat parties, a position he would maintain until 2005.

In October of that year, he won the general elections once again and that’s when things started to get a little complicated. Leading without an absolute majority in Parliament, Guterres had his hands tied at such crucial times as those that always precede the approval of the State Budget. Those were very debilitating times for him. After a little over two years, he decided to step down from office. The justification that he presented for his resignation became notorious: “I am resigning to prevent the country from falling into a political swamp”. Guterres’ years in power coincided with some of the country’s highest growth rates. In 1998, the year of Expo – the world fair which took place in Lisbon, under the theme “The Oceans, a Heritage for the Future”, paying homage to the 500 years’ anniversary of the Portuguese discoveries -, the growth in GDP was close to 5%. Portugal had never lived such golden years.

PAVING THE WAY FOR THE INTERNATIONAL SPOTLIGHT

António Guterres was increasingly occupying a prominent position on the international circuit. As president of the European Council in 2000, he promoted the adoption of the so-called “Lisbon Agenda”, a strategic development plan for the European Union, he co-chaired the first summit between the European Union and Africa, in Cairo, and later, the Committee for Development.

In 2005, when he was still working as a consultant at Caixa Geral de Depósitos, a Portuguese state-owned bank, he decided to apply for the position of United Nations High Commissioner (UNHCR).

Competing with seven strong rivals, including the former French minister and renowned intellectual Bernard Kouchner, the former Italian commissioner Ema Bonino, and the Tunisian Kamel Morjane, deputy high commissioner for Refugees, Guterres was chosen by a committee of experts, succeeding Rudd Lubbers from the Netherlands in that office. When starting at the UNHCR, he said he was joining the agency with conviction, humility and enthusiasm. “Conviction because I truly believe in the core values of this office and I want to struggle to make them prevail all over the world. Humility because I have a lot to learn and will be depending on all of you for that. Enthusiasm because I would not be able to choose a more noble cause to fight for”.

According to his official biography, for the ten years in which he was the head of the agency, the former Portuguese prime minister promoted strong structural reform within the organisation: he increased the effectiveness and capacity of the organisation’s emergency response. His term was marked by some of the biggest and most severe crises of refugees and displaced persons of the last decades, such as those resulting from the conflicts in Syria, Iraq, South Sudan, Central African Republic and Yemen.

In January this year, Guterres confirmed his willingness to be a candidate for the office of UN Secretary-General and said: “I had the huge privilege of accumulating a series of experiences, I lived through a revolution in Portugal, I was at the forefront of the democracy consolidation process, I was party leader and prime minister, I worked for ten years to support refugees, many doors were opened to me to everything that is vital in international relations. I have the duty of putting those abilities to work”.

The breathing for success
The Man behind the Nobel Prize
Brexit, One Way Out?
Having a blast with… Vhils
Speeding Heart Beat