16 Dec Millions of hearts pulsing to the same beat

Millions of hearts pulsing to the same beat

Following the article on the previous issue of Feed that anticipated the World Youth Day gatherings, this is the aftermath of this religious congregation. 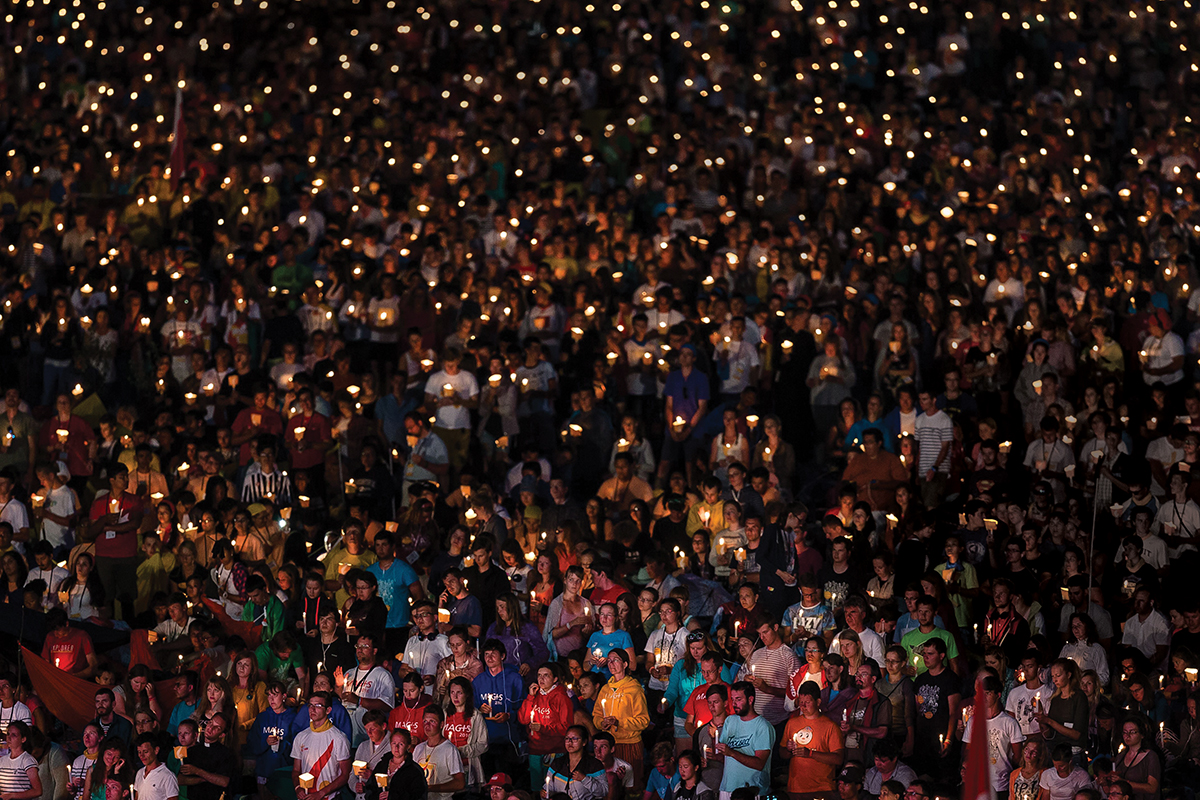 The seven days of the World Youth Days took place from 26 to 31 July in Krakow and Brzegi (near Wieliczka), in Poland. Millions of young people from 187 countries round the world came together as one community under the fraternity of the Catholic Church. This successful venture was also followed by more than 60% of Poles, who accompanied the path of Pope francis during his visit to this event.

This year, the World Youth event is also celebrating the 1050th anniversary of the (Catholic) Baptism of Poland, as signalled by the personal baptism of Mieszko I, the first Christian ruler of the Polish state.

The event was divided into two main parts: “Days in the Dioceses”, in which the young people visited the territory of the country organizing the event; and the “Main events”, involving a period of one week in the main organizing city. The participation of the Pope, the enthusiasm of young people and the good organization of the event contributed to this event exceeding the most optimistic expectations. In a statement to Kai, the Polish Catholic news agency, the spokesperson for the Polish episcopal Conference, father Pawet Rytel-Andrianik, stated that it was the first time that the event had welcomed young people from almost every country in the world. the preparation which was undertaken – lasting many months to make the atmosphere friendly, hospitable and safe – contributed to numerous participants pointing out that the Misericordiae Campus in Brzegi had the largest and best prepared infrastructure in the history of the World Youth Day.

A joint effort was made to ensure that sufficient transportation was provided to cover the increased volume of users and travellers during the event. During these days, Krakow airport increased its capacity to support an additional 208 aviation operations, and its airport services – from July 19 to August 8 – were used by approximately 40 thousand passengers (pilgrims). At the same time, volunteer workers from Poland, Slovakia, Lithuania, Ukraine, Canada, Germany, Italy, Romania, Malaysia, Croatia and Vietnam worked in the airport. By land, 1.1 million pilgrims used Polish trains, and this was the biggest challenge faced (and overcome) by Polish railways in the last 25 years. Passengers were able to use almost 2.6 thousand regular trains and an additional 398 special trains, which had been reserved by various dioceses. The 2 million visiting pilgrims were transported daily by 250 trams and 580 buses, and 1011 and 1054 lines were added, respectively, for the special transport of passengers.

Security for the participants of the World Youth Days was ensured by the Polish authorities. At the height of the event, the security of the central events was provided by more than 20,000 police officers, 830 agents of the Government security Bureau, along with the work of numerous border agents, customs officials, railway staff, military police and firefighters who helped ensure the events ran in the best possible manner. As for the medical safety of pilgrims, this was provided by a total of 37 paramedic delegates to ensure the welfare of the participants during the event. A view of pilgrims at the Adam Mickiewicz monument in Krakow’s main square ahead of the official opening Mass of the World Youth Day 2016, on July 26

During the World Youth Days, the Ministry of agriculture and rural Development and the agriculture Market agency carried out a promotional campaign to introduce participants to the best Polish products and to promote Poland during the Days, and use this event as an international platform. Using the slogan “Poland tastes good”, 40,000 bottles of apple juice, 8 tonnes of apples, 50 000 units of smoked sausages, sliced carrots, strawberry yoghurt and bottled mineral water were distributed.

According to the Ministry, the pilgrims were delighted with the good Polish food, as well as the multimedia presentation about Polish agriculture and hospitality, and indicated they would visit the country soon. This promotional event took place on the steps of Wawel hill in Krakow, where films, animations and Polish recipes were presented, and a small orchard was even planted to help the visitors relax.

On the occasion of these World Youth Days, Biedronka stores in Krakow were open, all day and all night, and it was also possible to pay in euros. In addition, Biedronka prepared a special promotion for tourists, which included regional and seasonal products.

From 25 July, 10 Biedronka stores were open all day and night. On the weekend of 30 to 31 July, a total of 20 chain stores were permanently available to customers. At the same time, and for the convenience of tourists, drinks were sold in tents alongside 3 stores. on those days, customers were given maps of the city (showing the location of Biedronka stores and their opening hours).

The World Youth Days also provided an opportunity to present Polish and local products to its participants. For the residents of Krakow, Biedronka prepared a supply of food and non-food items for daily use at attractive prices. Biedronka also provided pilgrims with candles and lanterns with the logo of the event. In cooperation with Caritas in the Krakow Diocese, Biedronka also provided “source” natural mineral water. A portion of the sales of this product was allocated to projects under development by the archdiocese, including the completion of the construction of a Misericordiae Campus for the disabled and elderly in Brzegi. The trip of the Portuguese group of scouts, from clan 57 and from the Galileo tribe, to the World Youth day in Krakow, was “powered by” Jerónimo Martins, that provided the opportunity to participate in an experience which they feel will “mark them for the rest of [their] lives”. Thankful for the “unique opportunity” granted by Jerónimo Martins, the report they made of the meeting is full of feelings of “a great hospitable and cheerful spirit”. These scouts were involved in numerous activities, including a visit to the Wieliczka salt mines, “one of the biggest attractions in Krakow” and “the only mining site in the world which has been operating since the Middle ages, with a size of 300 km and a depth of 327 m”. They also attended the opening Mass, full of young people ready to welcome the Pope. They visited Auschwitz, attended the reception of the Pope in Blonia and watched him arrive by tram, and visited the shrine of Pope John Paul II (of whom “there are 80 statues in the city of Krakow”). There was a vigil in the Field of Mercy and at end the Sending out Mass and the Eucharist. The environment was experienced as being “magical and welcoming”.

The environment was “magical and welcoming”

Portuguese group of scouts, from clan 57 and from the Galileo Tribe, at the World Youth Days

On 27 July, a meeting was held for young people from Portugal, organized by the Portuguese bishops at the ICE Krakow Congress Centre during the World Youth days. this was an event organized for 2,500 Portuguese, and used two rooms, an auditorium and a theatre. While the events were taking place in one room, they were transmitted live to the other – and these events included two concerts, with one of them, the highlight of the event, being a fado concert. Traffic movement during the days was restricted, and to provide for an efficient organization, passes were purchased so that the entire staff was able to move around Krakow. A special identification was issued to authorize participants to enter the venue. This turned out to be a success: all the facilities were found on time as well as the installations necessary for the smooth running of the event. In the end, the satisfaction and gratitude of the bishops and young people was the greatest reward.