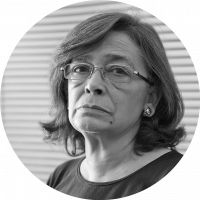 Specialist in European and international affairs, Teresa de Sousa is a journalist and columnist for the Portuguese newspaper Público, since 1989. She is the co-author of “Portugal at the Centre of Europe” and “Euro – beyond the currency”. Teresa de Sousa was awarded the Commendation of the Civil Order of Merit by the Spanish Embassy, receiving also the decoration of the Knight of the French State’s National Order of Merit, by President Jacques Chirac and the Commendation of the Order of Prince Henry, by President Jorge Sampaio.