Founded in 1939, the Gold Museum of Colombia is home to the most important collection of pre-Hispanic gold and cements the country’s cultural identity. 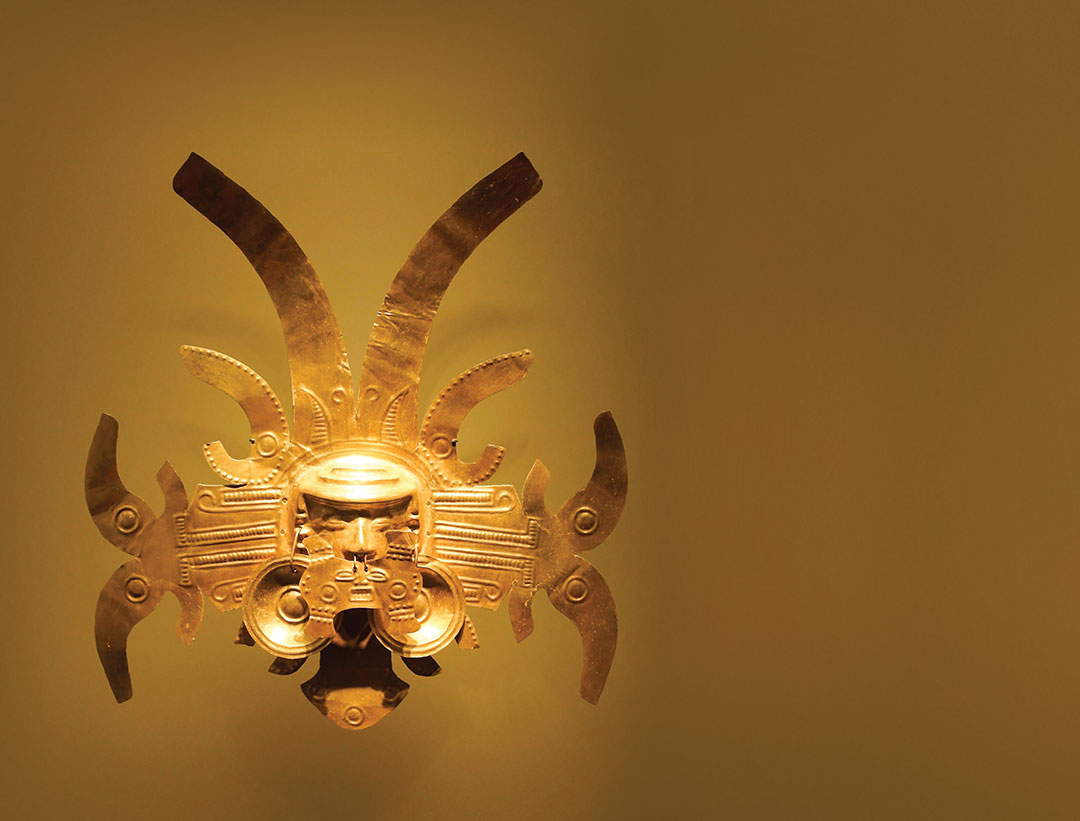 “The manager gets a telegram from Medellín asking him to deal with an offer made to the bank by Señora Magdalena v. de Maldonado for the sale of a gold vessel of native manufacture, adding that a note has been received from the government recommending that the bank takes steps to prevent archaeological objects in gold from leaving the country (…) Having reflected on the matter, Mr Jaramillo proposes that an offer of $3,000 be made for the piece, and this is approved.” (Section IV of the minutes of meeting 1174 of the Governing Board of Banco de la República. 17 May 1939). 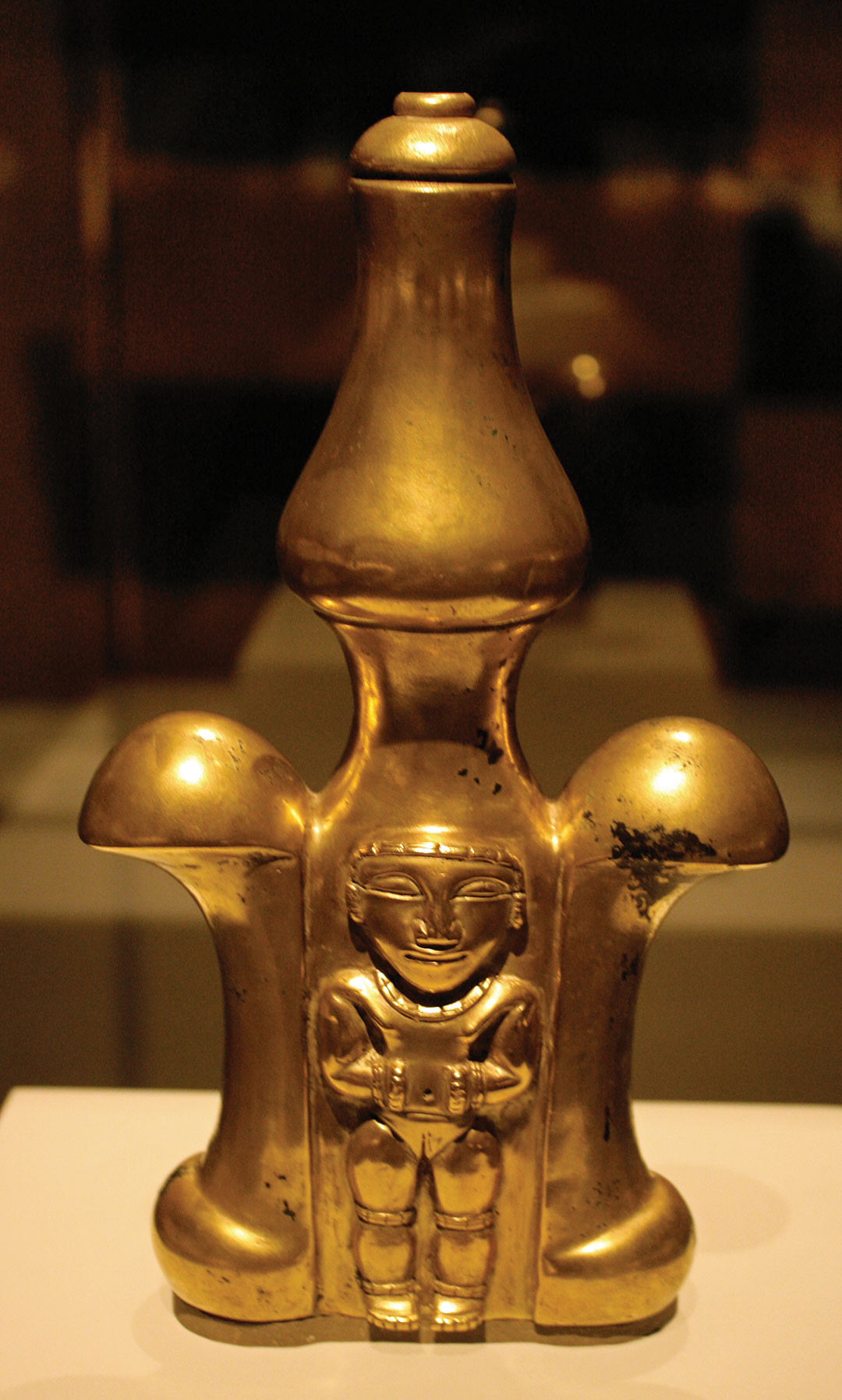 The acquisition of the Poporo Quimbaya marks the beginning of the world’s most important display of pre-Hispanic gold smithery.

It came from the district of Pajarito, in the Department of Antioquia, weighed 777.7 grams and stood 23.5 cm high. Dating from the years 100 to 500, the “gold vessel” was the celebrated Poporo Quimbaya, whose acquisition marked the start of what is today regarded as the world’s most important display of pre-Hispanic gold artefacts. More than 34,000 metal objects and 20,000 pieces in ceramics and other materials are conserved in six Colombian cities (Armenia, Bogotá [headquarters], Cali, Cartagena, Leticia, Pasto and Santa Marta), and together they tell the story of the Gold Museum of the Banco de la República. Founded in 1939, the museum has played an active role in preserving this heritage, researching, cataloguing and publicising its archaeological collections to help build a solid cultural identity for the Colombian people. The boardroom of Banco de la República was chosen as the original home of the collection. Still, the museum was soon moved to a special hall designed to welcome “illustrious visitors and tourists”. A catalogue from the time commented that “each display case in the museum is a source of wonder, delight and sometimes puzzlement”. It was only opened to the public two decades later, in 1959, at the new Banco de la República building.

A LEGACY FOR ALL

In the late 1960s, Colombia’s central bank opened a new building as a purpose-built home for the Gold Museum. A team of archaeologists, architects, museographers and educationalists worked together to design an up-to-date, world-class museum. It was the first building in Colombia built exclusively as a museum and won the 1970 National Prize for Architecture. The permanent exhibition tells the story of Colombia’s ancient history of goldsmiths: how the ore was mined, worked, used and transformed into a symbol, and finally returned to the earth as an offering.

Four thematic areas illustrate these perspectives. Working with Metals, where visitors can learn about the tasks of mining, processing and metalwork that lie behind the museum’s artefacts; People and Gold, exploring the climates, environments and societies of the Andes and the Pacific and Caribbean coasts, the historical gold regions; Cosmology and Symbolism, illustrating the thinking of native peoples that endowed the objects with meaning and significance; and Offering, looking at shamanic flight and the religious symbolism of native gold artefacts. 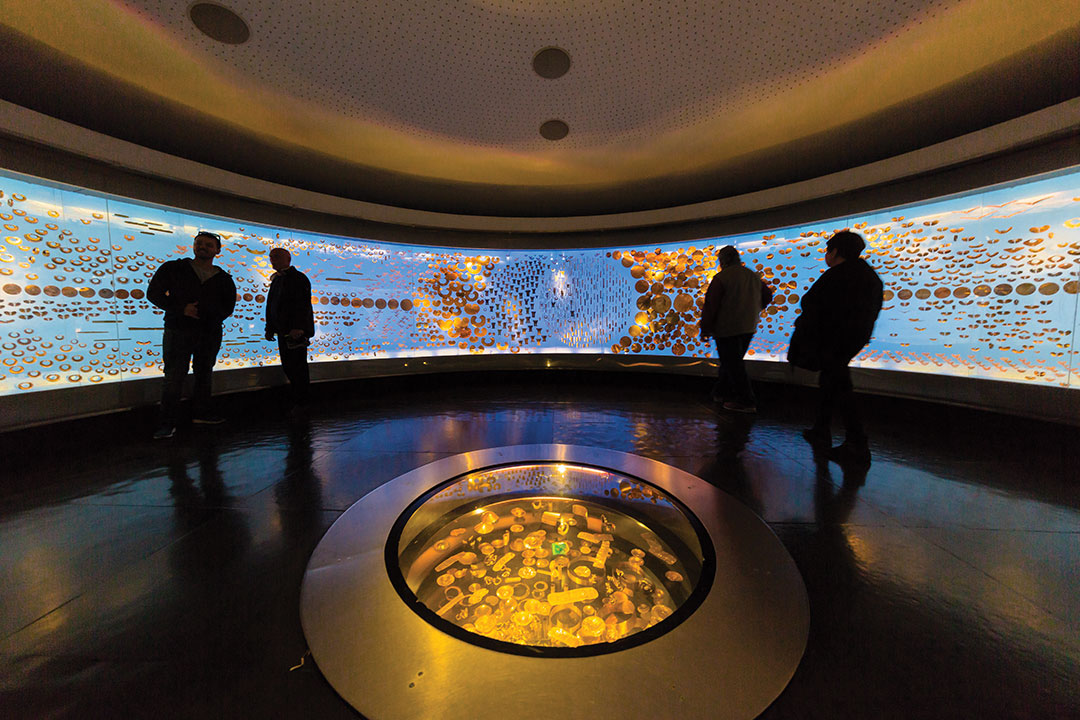 The museum recreates the cycle of gold, from its extraction to its return to the earth as an offering. 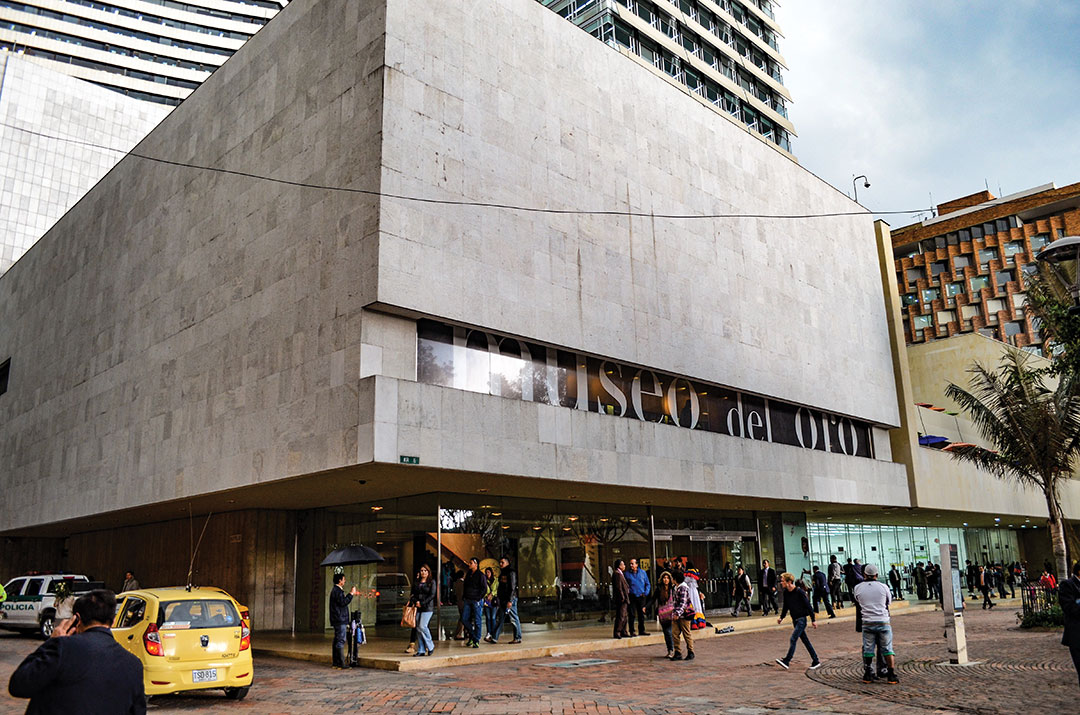 With more than 50,000 pieces in its collection, the Gold Museum has about 35,000 pieces made of this precious metal.

The Muisca Raft is the object that symbolises the myth of El Dorado. Based on the belief in a city filled with gold and lost in the jungle, El Dorado lured the European conquerors of the sixteenth century into hunting for the treasure – which they never found. According to the legend, when a new monarch was crowned, the indigenous Muisca people anointed the king’s body with resin and the finest gold dust was blown over it. Gold from head to foot, the king bathed in the waters of the Guatavita lake and threw his jewellery into the lake.

These objects in gold and precious stones were offerings to the gods in return for their blessing on his reign. The Muisca Raft (estimated to be crafted between the years 800-1600) depicts this sacred ritual in detail. It occupies pride of place in the Gold Museum and it is now seen by experts as similar to another artefact known as the Siecha Raft. Discovered in 1856, it ended up in the hands of Salomon Koppel, a diplomat who sold it to the Ethnographic Museum in Berlin. It was never to reach its destination, having been destroyed in a fire at the port of Bremen. 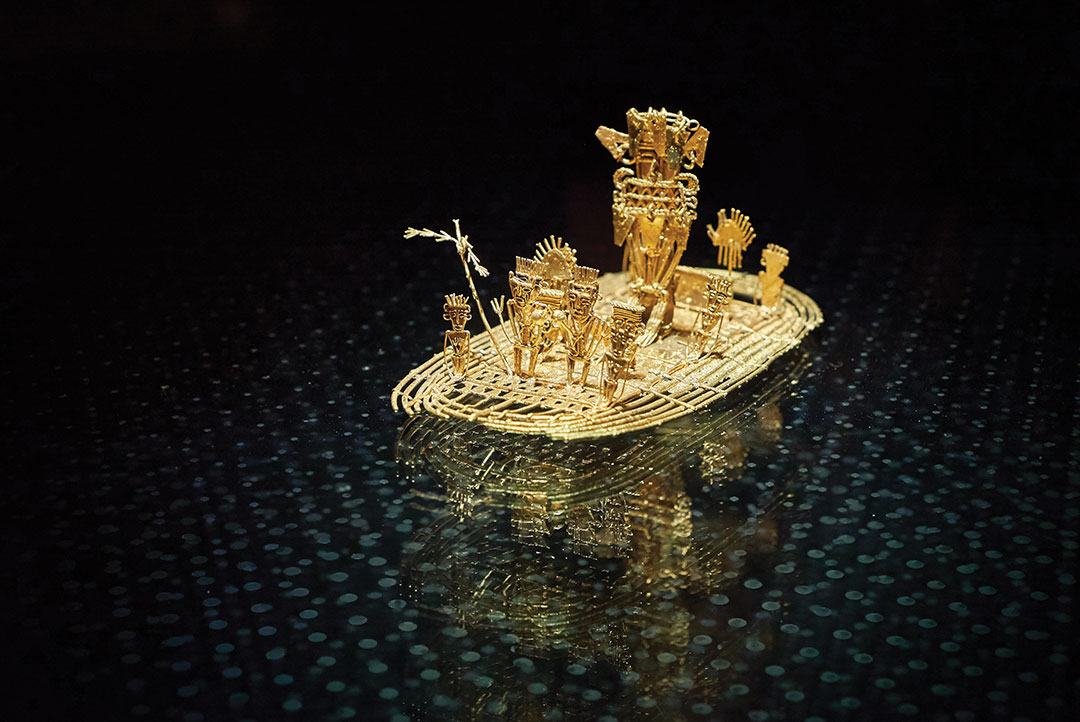 The Muisca Raft, a pre-Colombian votive figure made of gold by the Muiscas between the years 800 and 1600.

More than half a century later, in 1969, Jaime Hincapié Santamaría, a parish priest in Pasca (on the outskirts of Bogotá), was visited by a peasant who, in the company of his son, had found some gold and ceramic objects in a cave on the El Retiro and Lázaro Fonte roads. When Father Hincapié showed him the picture of the illustration of the Siecha Raft in the book entitled El Dorado by the Colombian doctor and scientist Liborio Zerda, the man confirmed that it was similar to the pieces he had found. Banco de la República purchased the piece, which had been offered by the Muiscas, and had remained hidden for centuries.

Known as the Muisca Raft, it quickly acquired the status of national emblem. The raft measures 19.5 cm in length, 10.1 cm in width and 10.2 cm in height. At the centre stands a large, important figure, interpreted as being the chief, because he is richly adorned and surrounded by ten smaller figures. Those at the front bear two jaguar masks and the marks of the shaman on their hands, and the very small figures are thought to be the oarsmen. Presenting itself as a cultural ambassador of Colombia, the Museo del Oro has taken 250 exhibitions to 100 cities worldwide. In 2018, National Geographic included it in a list of the sixteen best History museums in the world, ending the review with the expression “without words” to qualify the space. 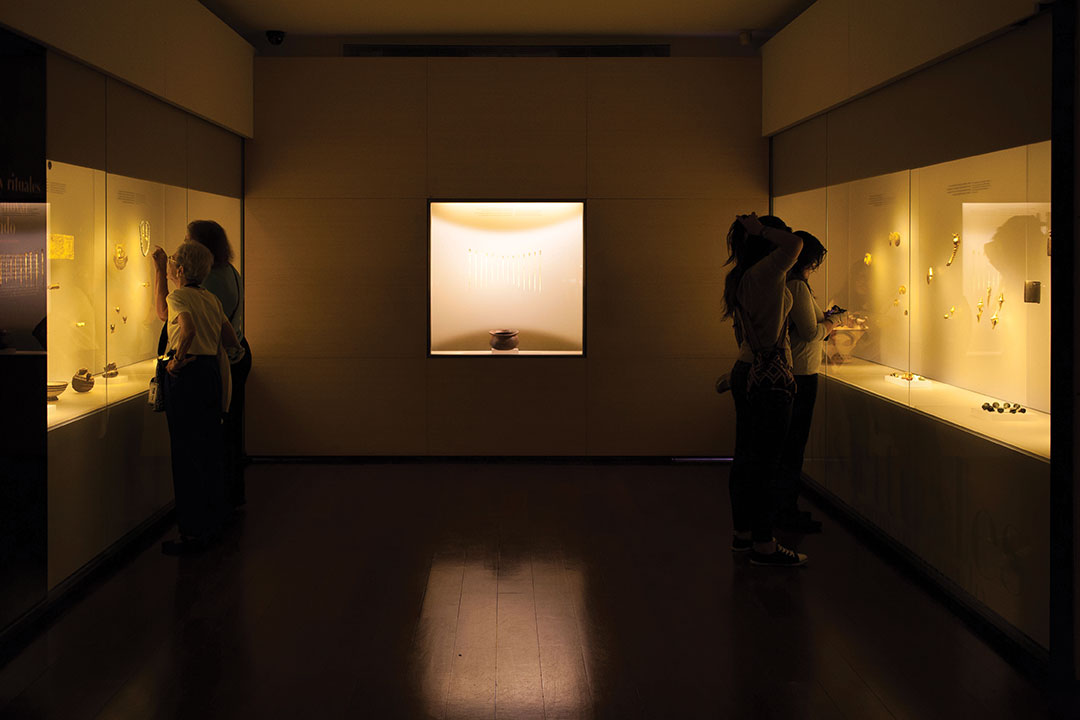 The exhibition represents the life and craft of the cultures that worked metals in the territory of today’s Colombia for 2,500 years.