Biedronka for the Common Good was the motto of its presence at the Karpacz Economic Forum, in September, highlighting its deep commitment to social and environmental engagement. Ukraine could only be a permanent backdrop and a common topic of discussion.

The only Polish company that cooperates with the three largest aid organisations in Poland – Caritas, WOŚP (Great Orchestra of Christmas Charity) and Szlachetna Paczka (Noble Gift) – is Biedronka. Through its partners, aid reaches the most vulnerable social groups and two-thirds of Poles associate Biedronka with support for Ukraine – a mission in which the company has been involved since the early days of the war. Biedronka for the Common Good was the motto of its presence at the Karpacz Economic Forum, the most relevant political and economic conference in Central and Eastern Europe.

The event, also called the Central European Davos, traditionally brings together representatives from politics, business, culture and science to discuss Europe’s challenges. Ukraine was a permanent backdrop and a common topic of discussion at the 2022 event. More than 5,000 people from 59 countries participated in the 31st Economic Forum. The way businesses can unite around ideas for the common good was discussed by representatives of aid organisations during a panel discussion organised by Biedronka.

According to Arkadiusz Mierzwa, Corporate Communications and Sustainability Director at Biedronka, “the last year has shown that, despite weakening social ties, we still have a deep-seated need to act altruistically and to help. Biedronka has proved to be an aggregator of this help, making its stores a space of social commitment and a place where people help in the name of the common good. But providing aid is not a one-off sprint; it’s a real marathon, requiring proper preparation and a strategy. 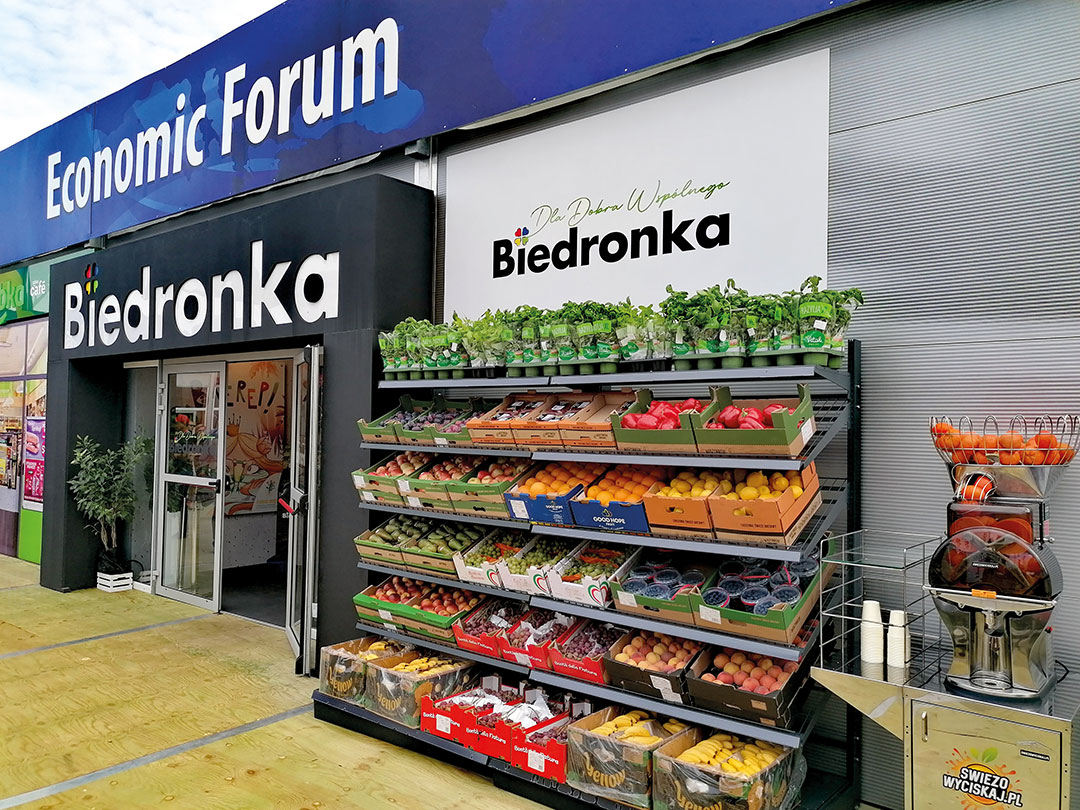 Biedronka had a dedicated area to show visitors its deep commitment to social activities.

Only by acting methodically and comprehensively and cooperating with organisations with the greatest experience, are we able to invite our customers to this coalition of good, making aid campaigns a real festival of solidarity”. Biedronka had a dedicated area to show visitors its deep commitment to social activities. One project in the exhibition was developed with WOŚP: woollen caps carrying the charity logo and sold at Biedronka stores. All of the revenue from their sale, almost 5 million złoty (around 1 million euros), was donated to WOŚP and accounted for most of the total amount of 7.4 million złoty (1.5 million euros) donated to the foundation by Biedronka, the main sponsor of the 30th Finale of the Great Orchestra of Christmas Charity. Another initiative was the magnetic products boasting the Szlachetna Paczka (Noble Gift) logo, the purchase of which has supported more than 17,000 families.

The purchase of Caritas Polska candles allowed Biedronka to donate 350,000 złoty (73,000 euros) to the Caritas Academy for Children programme. Sell the books accompanying the Swojaki Gang (Homies Gang) campaign, with the revenue of 2.5 million złoty (500,000 euros) going to the Polish Society for Nature Conservation Salamandra, for the benefit of six species of endangered animals in Poland.

HOW TO UNITE PEOPLE AROUND THE COMMON GOOD

Poles expect social commitment from businesses and involvement in campaigns supporting those in need, according to the participants in the panel “How business can unite around the idea of the common good”, organised by Biedronka during the Economic Forum in Karpacz. The panel, chaired by Arkadiusz Mierzwa, Communications and Sustainability Director at Biedronka, was made up of Marcin Iżycki (Caritas Poland), Dominika Langer-Gniłka (Wiosna Association), Julia Dmytryshyna (Help Ukraine Front) and Mieczysław Puzewicz (Volunteer Centre in Lublin).

All panellists agreed that businesses had become more socially responsible because of the war in Ukraine. During the event, Jarosław Sobczyk, HR Director and Member of the Management Board of Jerónimo Martins Polska, emphasised that the pandemic, the war in Ukraine and the related refugee crisis have strengthened the commitment of the employees, as they hold the company’s mission close to their hearts, making them eager to respond. He also showed that in times of crisis, what matters above all is a responsible approach to the people who make up the business.

During the Economic Forum in Karpacz, Biedronka presented its 2021 Sustainability Report. The report subtitle, “For the common good”, highlights the priorities for social and environmental engagement, which are the pillars of the sustainability strategy of Poland’s largest retail chain.