Known on the street art scene as Ledania, Diana Ordoñez is one of the most influential Colombian visual artists worldwide. After being challenged to paint several murals on the walls of Ara stores, she brings her fantastical world to the cover of Feed. 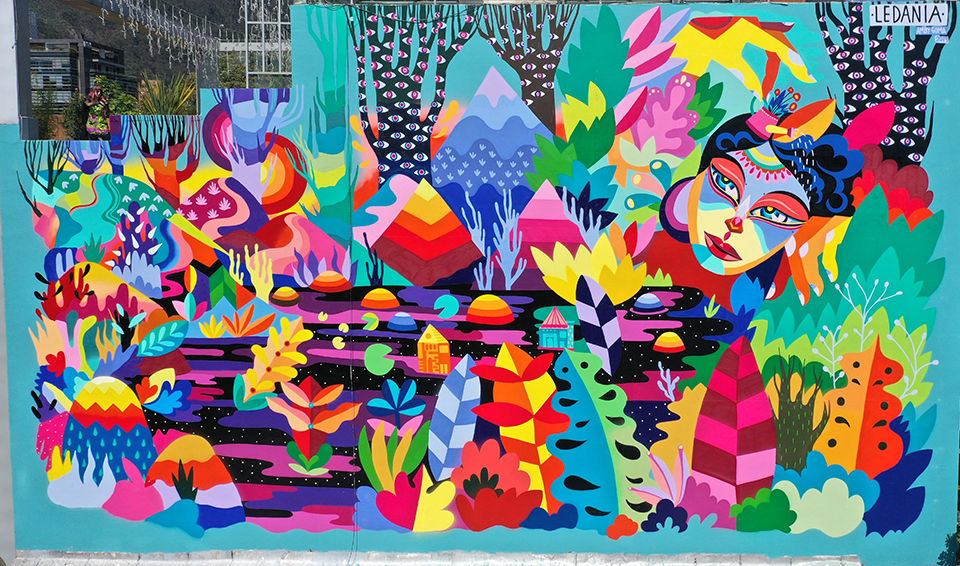 The celebration of colour and nature in scenes populated by imaginary creatures. An improvised place, somewhere between magical and mystical, linked to expressionism, cubism and surrealism. This is Diana Ordóñez’ world. As Leda – Princess of Sparta – was ravaged by Zeus disguised as a swan, so too was Diana seduced by graffiti: “Ledania is someone who lives in the graphic arts world and has expressed herself through the creative process since she was a child.” Diana was 15 when she accompanied her father to a renaissance oil painting exhibition at the Banco de la República Museum in Bogotá.

An anonymous painting entitled “The Rape of Leda” so enthralled her that she combined her own name with that of the figure from Greek mythology. When doing so, she had no idea that, twenty years later, her pseudonym would appear everywhere: on murals, in photographs, graphic art works, advertisements, make-up art and on clothing. “I like experimenting with other cultures.

I like travelling, discovering the world, learning about everything so that I can create graffiti with feeling.” Her characters “have no race or gender; they simply exist inside a world of colour and always inhabit fantastical places”. They are often places of pure happiness, like her homeland. “For me, Colombia is happiness itself in many aspects. Take Carnival, for example, and the celebration it represents. And also our ancestors and how they explored decorative traditions in their craftsmanship, which also began incorporating European influences following colonisation. I too am the product of that melting pot.” 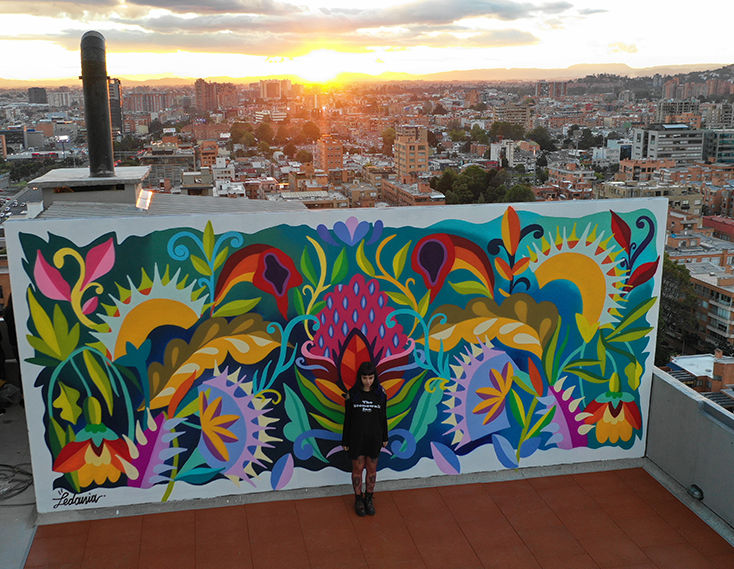 “Graffiti punk toda la vida” (Punk graffiti for life) – that’s how she introduces herself to her social media followers. However, it was only while doing her master’s degree in Visual and Plastic Arts at Pontificia Universidad Javeriana in Bogotá (2010) that Diana became interested in urban art.

“For me, street painting is a political or social act, even if there isn’t a specific message. I’m changing a structure in the city, intervening in it, adding my perspective and changing how people who walk by there every day react to the space.” Her murals are scattered across 22 countries, from Colombia to the United States, Spain to Japan. The neo-muralist has already displayed her art at several international exhibitions, such as the Curitiba Biennial in Brazil, Art Expo Malaysia and the Artscape Festival in Sweden. 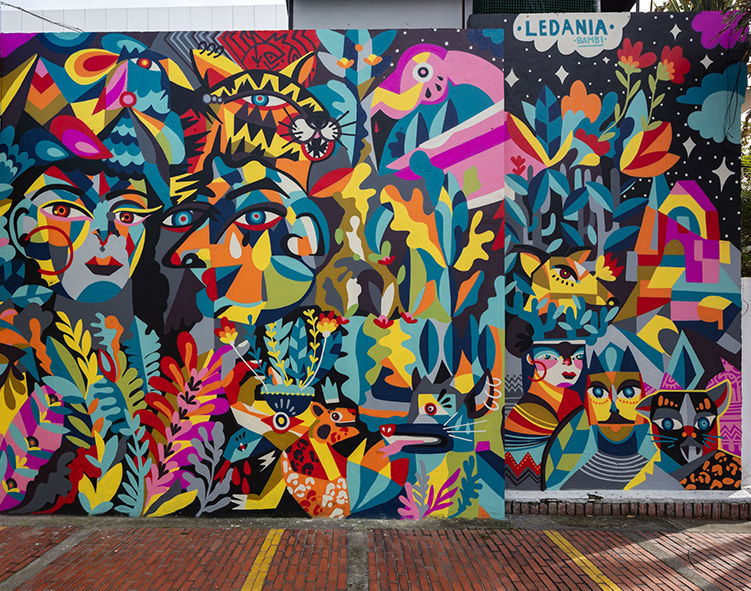 Ledania’s art includes depictions of nature in its many forms, as well as fantasy characters that have no race or ethnicity and exist within a world of colour diversity.

Ara challenged Ledania to paint graffiti on the walls of some of its stores, adding more colour and joy to the streets of Barranquilla, Manizales and Bogotá. To represent the hustle and bustle of downtown Chapinero, the artist found inspiration in Colombian flora and fauna and in the mountains of the country’s eastern landscape. Birds were used to symbolise the creative freedom that Ledania had in this challenge. “With Ara I was free and happy. In other words, I spent every day painting and feeling positive because I had the freedom to do whatever I wanted with my colours, letting my creativity soar.” In 2022, Ledania’s art will hit three more Ara stores in Cartagena, Cúcuta and Cali. 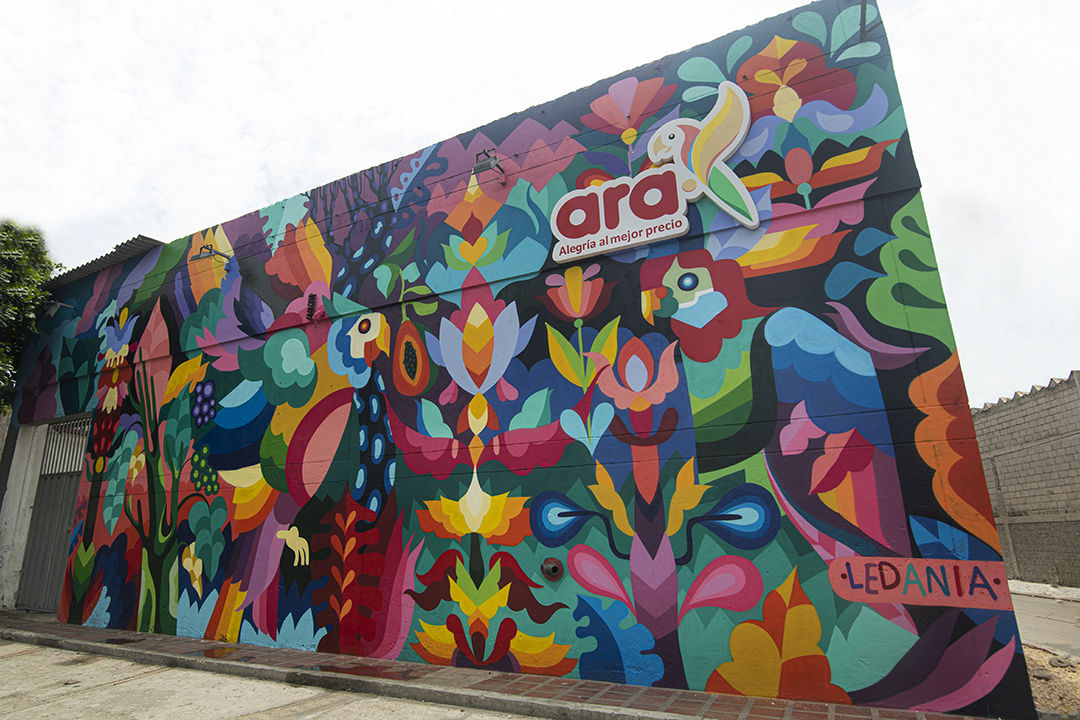 Ledania was challenged by Ara to paint graffiti on the walls of some of its stores, bringing more joy to the streets.

THE POWER OF WILL

The Colombian artist was also invited to design the cover of this edition of Feed magazine. For Ledania, finding her particular meaning of the word ‘will’ meant thinking of a maxim: “To me, the word ‘will’ means freedom, the ability to make my own decisions. And knowing that ‘where there’s a will, there’s a way’.” In this piece, the artist created a new world with a human element co-existing in harmony with its surroundings. “The characters co-exist with the environment, the city, the architecture and diversity in a mysterious future, but one that I see as a place of freedom and diversity.” 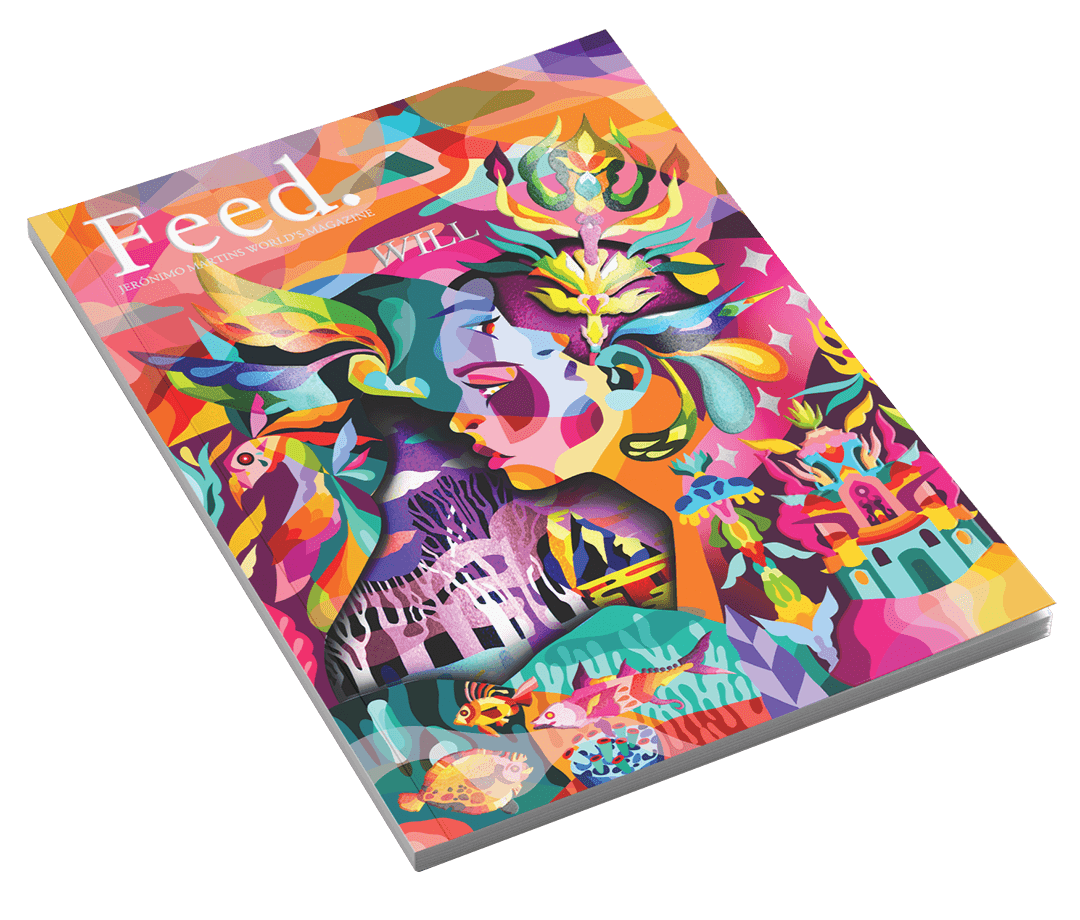