The rise of the temperature is threatening coral reefs, which are considered one of the richest ecosystems of the in terms of biodiversity in the world.

Considered one of the richest ecosystems in terms of biodiversity in the world and only comparable, on land, to tropical forests, coral reefs are currently threatened by climate change. This is the origin of the phenomenon known as coral bleaching, which has already taken place on a massive scale on three occasions. The last one was in 2014 and its effects on the reefs are still felt today.

It is believed that this third major bleaching was also associated with El Niño, the cyclical phenomenon involving the warming of the waters of the Pacific Ocean, which may have been the most serious ever, according to various experts. The future of these ecosystems is truly at risk – if climate change cannot be stopped globally, it is very likely that the vast majority of coral reefs will have disappeared by the end of this century.

CORAL BLEACHING, WHAT IS IT?

Coral bleaching is related to an increase in water temperature, which causes the microalgae that live in symbiosis with coral – the so-called zooxanthellae implanted in the gastrovascular tissues of the polyps – to take on different colours, and start producing toxic substances. This explanation was given by Teresa Pina, from the Department of Education of the Lisbon Oceanarium, who points out the threat now hanging over the coral. Located in the Coral Sea, off the coast of Queensland, Australia, the Great Barrier Reef is considered to be the largest ecosystem of coral reefs in the world

Almost 93% of the Great Barrier Reef, in Australia, has been affected by the large scale bleaching that took place in early 2014.

Let us look at the numbers. In April 2016, a group of Australian scientists showed that almost 93% of the Great Barrier Reef – considered the largest system of coral reefs in the world, between the North-East coast of Australia and Papua New Guinea – has been affected by the large scale bleaching that has been taking place. With a length of 2,300 kilometres and an area of 345,000 square kilometres, the Great Barrier Reef is a biodiversity sanctuary.

It is also of great social and economic importance to Australia – every year it generates revenues of around 3.7 billion dollars (about 3.25 billion euros), directly or indirectly, in addition to ensuring 70,000 jobs, according to a recent report from the National Coral Bleaching Taskforce (NCBT).

Teresa Pina, a graduate in Marine Biology, explains that increasing the amount of carbon dioxide in the atmosphere is also of considerable danger for the coral, which absorbs it, causing the pH of the water to decrease and preventing the deposit of calcium carbonate, the compound from which the reefs are formed.

Understanding the ecosystems of coral reefs can be a tricky task for those not in the know, but Teresa offers a good explanation: “Imagine that this is a big city and that each of these clusters is a building. Each building has several windows and each one of them is an individual. Transposing this to the reality of ecosystems, let us say that the buildings correspond to the corals and that the individuals who live in them are the coral polyps.”

Coral reefs are extremely important for societies and coastal communities that depend on them for their livelihood. According to data from the Coral Reef Alliance, a non-profit organisation working in the area of preservation based in San Francisco, California, 500 million people worldwide depend on coral reefs for food, and these ecosystems are their main source of income. 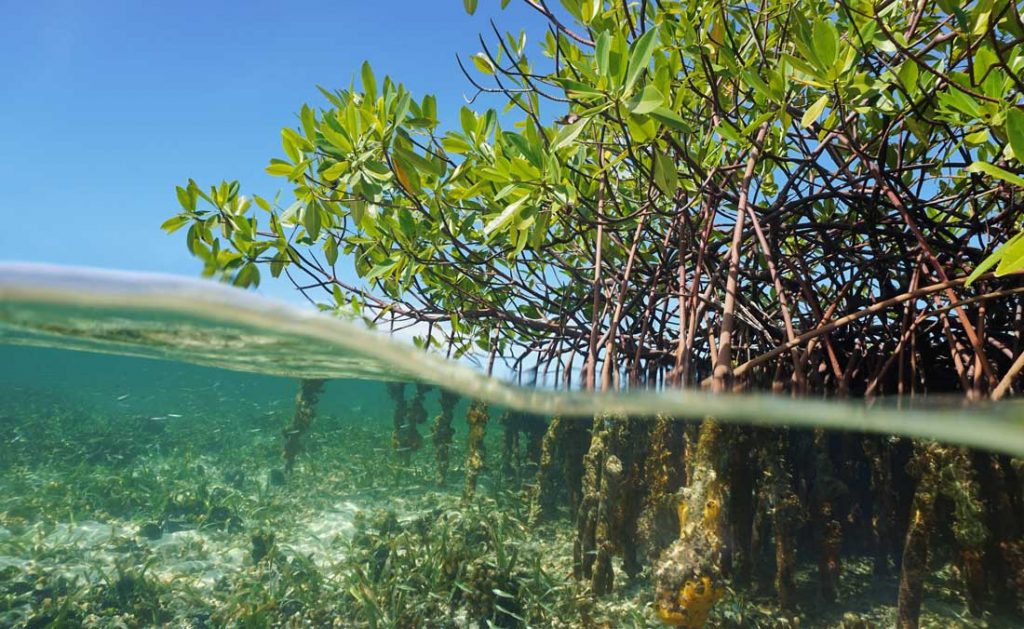 Mangroves
Mangroves, like coral reefs, operate as a protective barrier against storms and strong undulation

Their importance to the population also has to do with the fact that they serve as a protective barrier against storms and high waves. “Basically, it’s like there’s a barrier that prevents the sea from entering the coast in a more aggressive and even destructive manner,” explains Teresa Pina. Mangroves – common forests in the tropics to be found in coastal areas that are recognized by their aerial roots – may serve the same purpose, with their roots preventing the movement of sediments that protect the coast against erosion caused by storms and the breaking surf.

Although their potential medical uses are not fully captured, it is already known “that some components of the corals can be used to treat heart problems and other diseases, such as cancer and AIDS.” Economically, they are responsible for promoting tourism and all the activities generated around it. The Coral Reef Alliance estimates, moreover, that coral reefs have an impact on the world fishing and tourism industries of around 400 billion dollars per year (around 348 billion euros). Teresa gives the example of Bonaire, a small island in the Caribbean Sea, located off the coast of Venezuela, where activities associated with coral reefs bring in a total of 23 million dollars (about 20 million euros) per year for the local economy. Coral reefs have an impact on the world’s fishing and tourism industries, which generate around 400 billion dollars every year

IMPACT OF FISHING AND THE JEWELLERY INDUSTRY

But coral reefs face other threats than those resulting from climate change. These are blast fishing and bottom trawling, considered “highly destructive” techniques, as well as overfishing in general. The direct capture of corals namely for commercial purposes also challenges the sustainability of these ecosystem. “A lot of people visiting coral reefs then want to take a souvenir home.

Unfortunately, it is a common practice”, Teresa says, giving the example of black coral, which is now protected but was once “used extensively in the jewellery industry”. And those who mention black coral could also be mentioning red coral or any other. It is the case that “all, in some way, may be threatened”. And here, the biologist states, is where “nonsense arises”. It is known that coral reefs do wonders for the tourism of the places where they are located and yet they continue to be in danger or even destroyed.

“Sometimes it’s important to think about this – how much is coral worth in a necklace and how much is it worth there, in the sea, where it can be seen by I don’t know how many people, who will contribute to boosting the economy of that place?” Climate Changes
The climate changes are at the origin of the phenomenon known as coral bleaching, which results in the loss of these organisms

Along with all these problems, Teresa Pina adds another – invasive species, “able to totally disrupt an ecosystem”. Introduced by human beings or transported, for example, in the cargo of ships, when these species reach a new ecosystem they can enter into competition with the species that are already there, causing major changes to that medium. Competition is in fact a reality among the coral, given the “special” conditions they need to live in. “They tend to try to occupy space. Of the different species that live in the same coral reef, only a few have features enabling them to form another reef. Not all have the ability to do so”, explains the biologist.

It may also happen that an object floating in seawater, such as a plastic bag, “for some reason” attracts juveniles (fish that have not yet reached adulthood), which stay there due to the protection that such a bag offers them, and they are driven by currents to an unknown destination. Often it is people themselves who throw fishes they bought in pet stores to the sea without thinking of the consequences. “Because they don’t know how to keep them or for any other reason”, these fishes are thrown back to the water joining “completely different” ecosystems than those where they came from.

Coral reefs are often described as the rainforests of the oceans. It is estimated that they constitute the habitat of about 25% of all marine species, although “they take up only 1% of the oceans”. With a history of at least 240 million years, reefs already have “a great story to tell”. Hopefully this story does not end here.

It is estimated that the coral reefs constitute the habitat of about 25% of all marine species.