27 Nov The Apple of our Eye

The Apple of our Eye

Worldwide consumption of roots and greens remains low. The UN General Assembly declared 2021 as the International Year of Fruits and Vegetables to raise awareness about the role of fresh produce in human health and foster sustainable and inclusive supply chains. 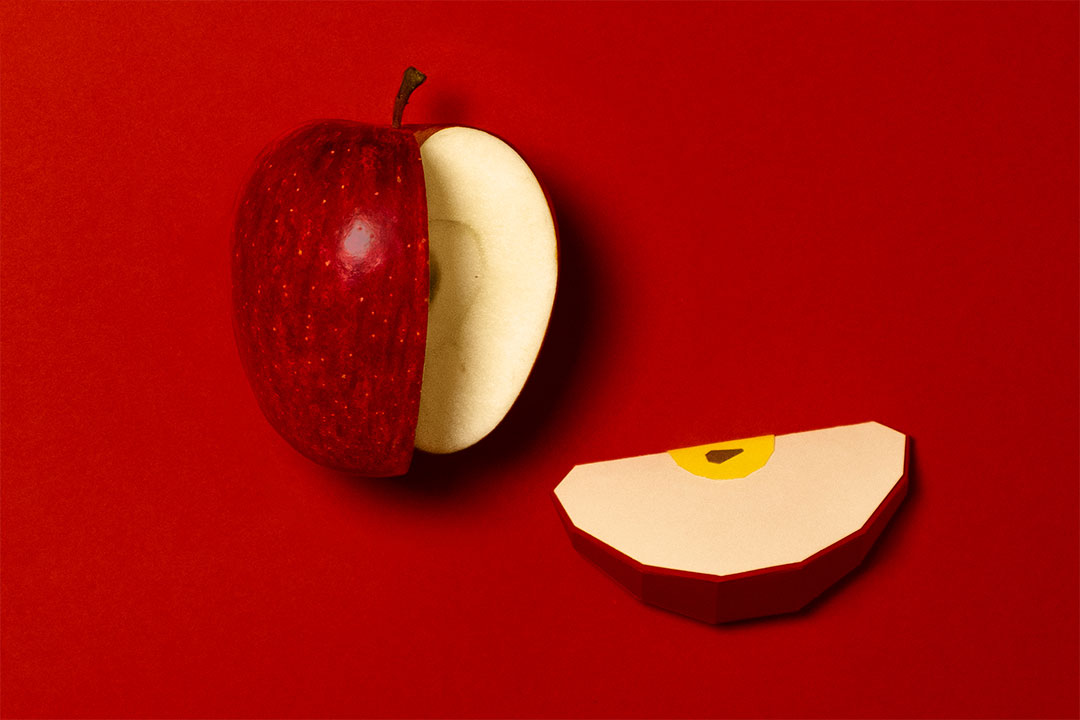 ONE A DAY, TO KEEP THE DOCTOR AWAY

Apples have their own rainbow, as their varieties cover a wide range of colours: from greens and yellows, to an array of red shades. Poland is the largest producer of apples in the European Union and the third largest in the world. Interestingly, the red apple is also the most sold fruit by our Group’s stores in Colombia. Pingo Doce customers in Portugal are also familiar with specific varieties of certified apples that have Protected Geographical Indication, such as Gala, Golden or Starking.

ONE MORE BITE…
Over 25% of all apples eaten worldwide come from Poland.

When thinking of healthy eating, fruit and vegetables should be the first food groups to come to mind. Packed with vitamins, minerals and fibre, they are important for our bodies to function, grow and regenerate. The UN’s observance is a celebration of these dietary essentials and a reminder of how important it is to harness their goodness. Fruit and vegetables should be introduced at as early as six months of age and kept as regular parts of a healthy diet throughout life.

The Food and Agriculture Organisation (FAO) and the World Health Organisation (WHO) recommend that each adult eat at least 400 grams (or five portions) of fruit and vegetables daily. Despite this striking evidence, on average, people only consume about two-thirds of the recommended minimum amounts. The reasons are linked to availability, affordability and consumer choices.

In 2017, 3.9 million deaths worldwide were attributable to insufficient intake of fruit and vegetables – which contributed to the upsurge and aggravation of other diseases, such as gastrointestinal cancer (14%), ischemic heart disease (11%) and stroke (9%). At the same time, it is estimated that more than 3 billion people in the world cannot afford a healthy diet. The relationship between regional income levels and the intake of fruit and vegetables is, however, very tenuous, as people in high income Western Europe and Northern America consume only half of the ideal amounts, while those in North Africa and the Middle East consume larger quantities.

A BITE AT THE CHERRY

In 2018, a total of 868 million tonnes of fruit and 1,089 million tonnes of vegetables was produced, as stated by the FAO. The main fruits were banana, citrus (orange, tangerine, mandarin, etc.), melon and apple. Among the main vegetables were tomato, various alliums (onion, garlic, shallot, leek) and brassicas (cabbage, cauliflower, broccoli). East Asia was by far the world’s main producing region of both fruit and vegetables, followed by South Asia. In contrast, Northern and Western Europe produce relatively little, having to import much of what they consume.

People in Central Asia, North Africa and the Middle East consume slightly more than the recommended minimum, while those in sub-Saharan Africa and Oceania consume only about one-third of this. Among the EU Member States, daily intake of fruit was most prevalent in Italy (85% of the population) and in Portugal (81%). When it comes to vegetable consumption in the Member States, Ireland and Belgium had the highest proportion of people who ate vegetables at least once a day (both 84%).

An analysis of fruit consumption per capita in Portugal, Poland, and Colombia puts the latter in first place, with 178.17 kg consumed per year. It is followed by Portugal, with 135.62 kg. Finally comes Poland, with 55.01 kg, less than half of what is consumed by the other two countries where the Group is present. When it comes to vegetables, Portugal leads (152.78 kg), followed by Poland (125.56 kg). Colombia comes third, with 48.73 kg 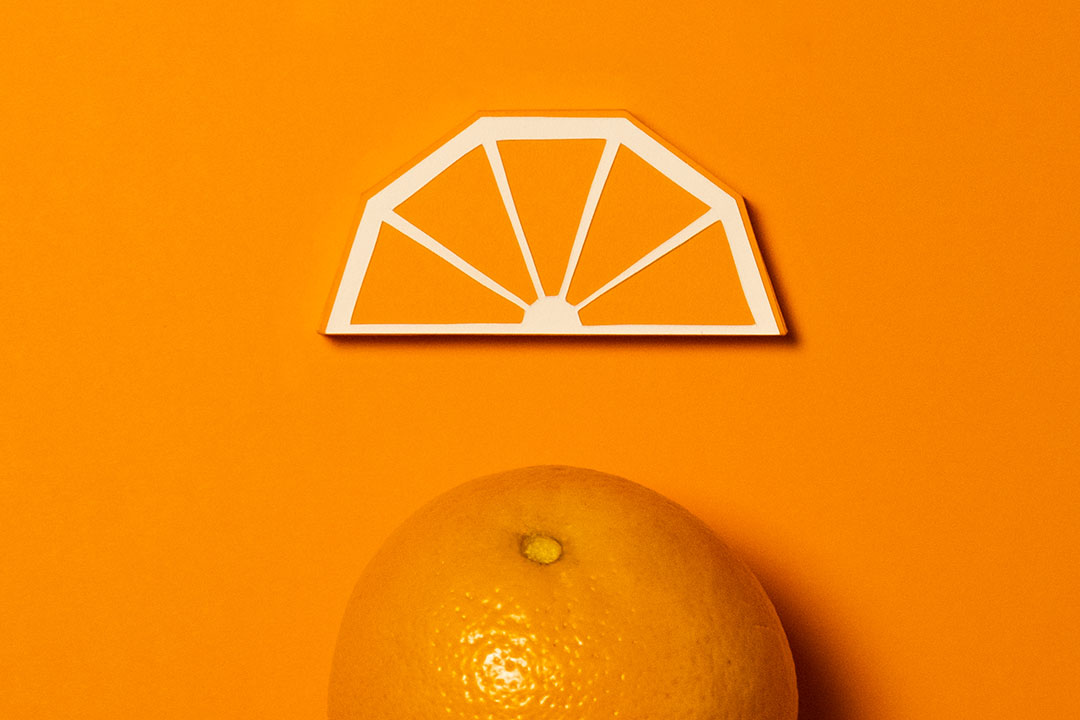 Native to Southeast Asia and grown in many of the warmer areas of the world, bananas are the most popular fruit worldwide, being a good source of several vitamins and minerals, especially potassium. It is the queen of sales in the countries where the Jerónimo Martins Group operates, except in the country where it is produced: Colombia. Most of its production goes to export.

Genetic evidence indicates that the mandarin is one of the oldest species of citrus fruits, originating in Asiatic regions, and is also the ancestor of the orange. Polish consumers are fascinated by the citrus fruits that come from southern Europe, such as lemons, oranges and mandarins. All three are present in the top five fruits sold by Biedronka, the Group’s food retail chain in the country.

ONE MORE BITE…
Bananas weren’t introduced to the Americas until the 16th century, when Portuguese sailors brought them from Africa.

ONE MORE BITE…
There are up to 200 varieties and hybrids of citrus fruits around the world, including tangerines and clementines.

WHEN LIFES GIVES YOU A BASKET…

An important reason behind global low intake of fruit and vegetables is availability. In 2017, world production reached 390 g per person per day. However, this includes non-edible portions, and loss and waste. In developing countries, up to 50% of fruits and vegetables are lost in the supply chain between harvest and consumption, mostly due to the lack of refrigeration and transport facilities, warehouses and retail outlets, causing a reduction in the shelf life, particularly when it comes to perishable items.

Considering that it can take up to 50 litres of water to produce an orange, losses of fruit and vegetables represent a waste of what is already a scarce resource. Food waste also results from stringent commercial quality standards at the retail stage that emphasise aesthetic appeal. The so-called “ugly fruit” is rejected even though it is perfectly fit for consumption from a nutritional and safety point of view. 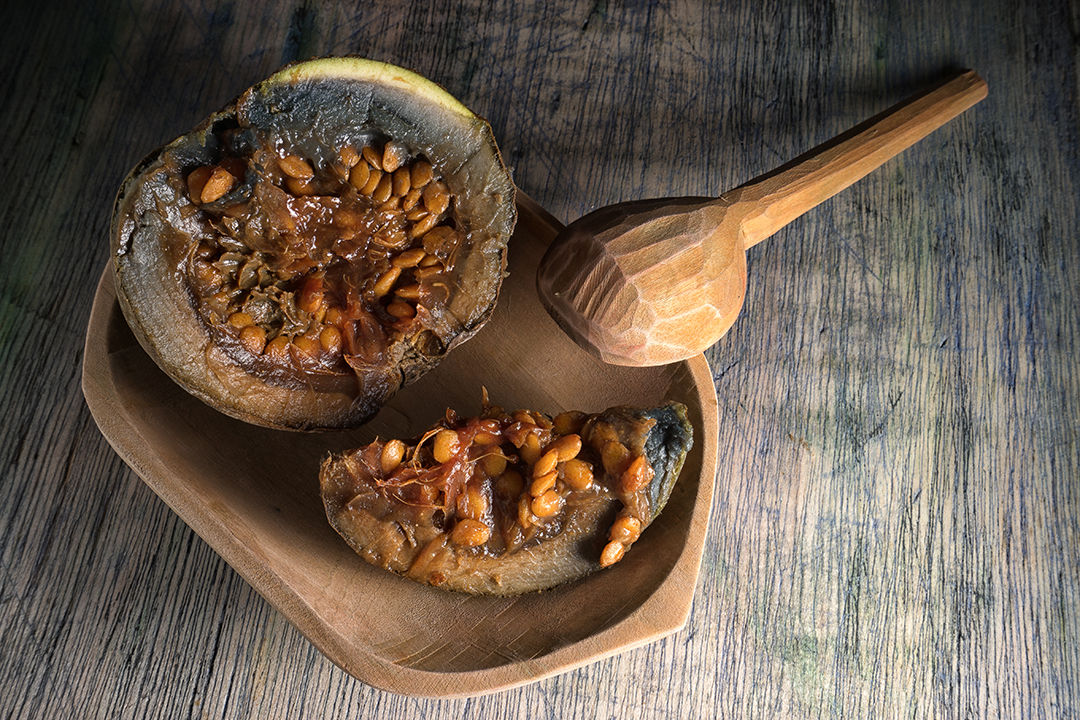 Well known for its high nutritional value, borojó is a tropical fruit mainly grown in the Pacific region of Colombia

Food is cultural: what people cook and eat in part determines their identity. Tastes are influenced by the culture they are brought up in. But cultures and, consequently, diets do change. Urban lifestyles are linked to a greater demand for convenience, sometimes resulting in an increased intake of sugar, oils, animal products and highly processed foods, to the detriment of fresh fruit and vegetables.

This change is known as the “global nutrition transition”, whose negative effects began to be recognised in the early 1990s, primarily in low and middle income segments, but only became clearly recognised as diabetes, hypertension and obesity began to dominate the globe. According to the latest Global Nutrition Report, one in three people globally are overweight or obese and at least 2.8 million people die each year due to being overweight or obese. The global medical costs of treating the consequences of this are expected to rise to 1.2 trillion euros annually by 2025.

Changing tastes and trends, lengthy and laborious processing, higher prices fetched by other crops or lack of production resources: whatever the reason, over time farmers stopped planting certain crops. This has been eroding the traditional knowledge of them and these forgotten fruits and vegetables, often uniquely adapted to their local environments, could play an important role in supporting diverse and nutritious diets. This is basically the case of breadfruit, whose white flesh has a bread-like texture and a chestnut-like flavour. Originating in Oceania, it contains high levels of starch that can replace wheat flour. 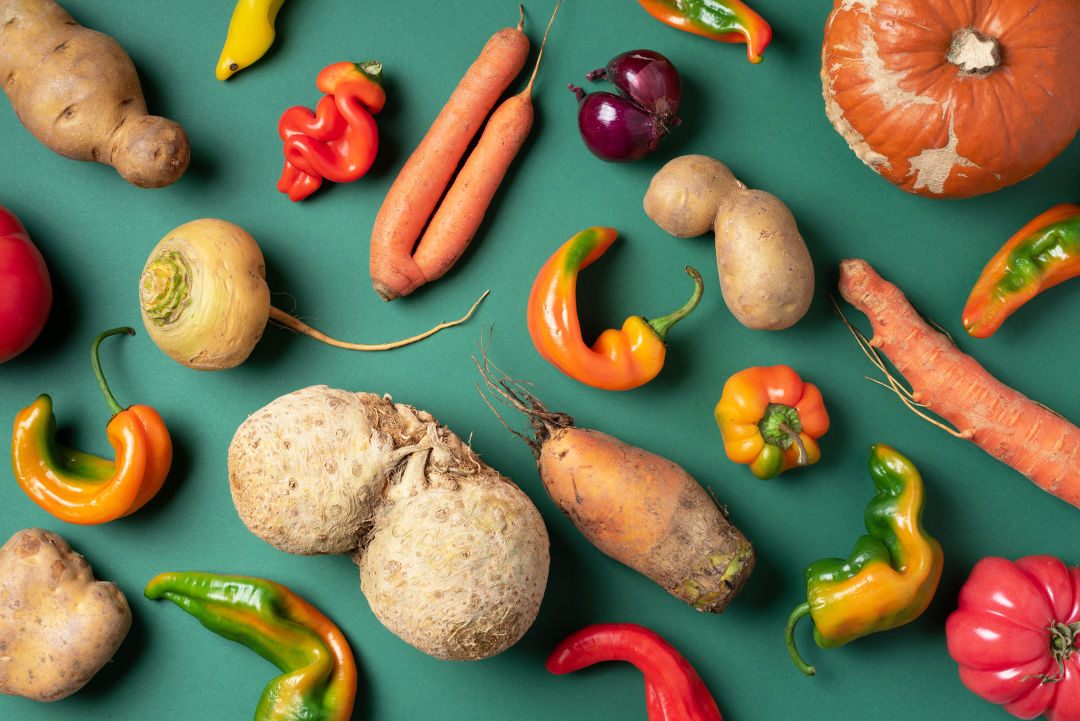 Another example is borojó, native to the northwest of Colombia in the Chocó Department. Considered sacred among the indigenous Embera people, the fruit is best known for its energetic properties and also believed to be a natural aphrodisiac: its pulp is made into a famous drink known as jugo del amor or “juice of love”. While the fresh fruits are primarily consumed locally, the pulp is processed into frozen purees and powders are shipped worldwide. In Poland, rutabaga is the forgotten vegetable that remains hardest to find. “Brukiew” for the middle class and “karpiel” among peasants, it was once a staple of many working class diets. Nowadays, rutabaga is included in regional specialties like Kashubian soups or goose with marjoram. 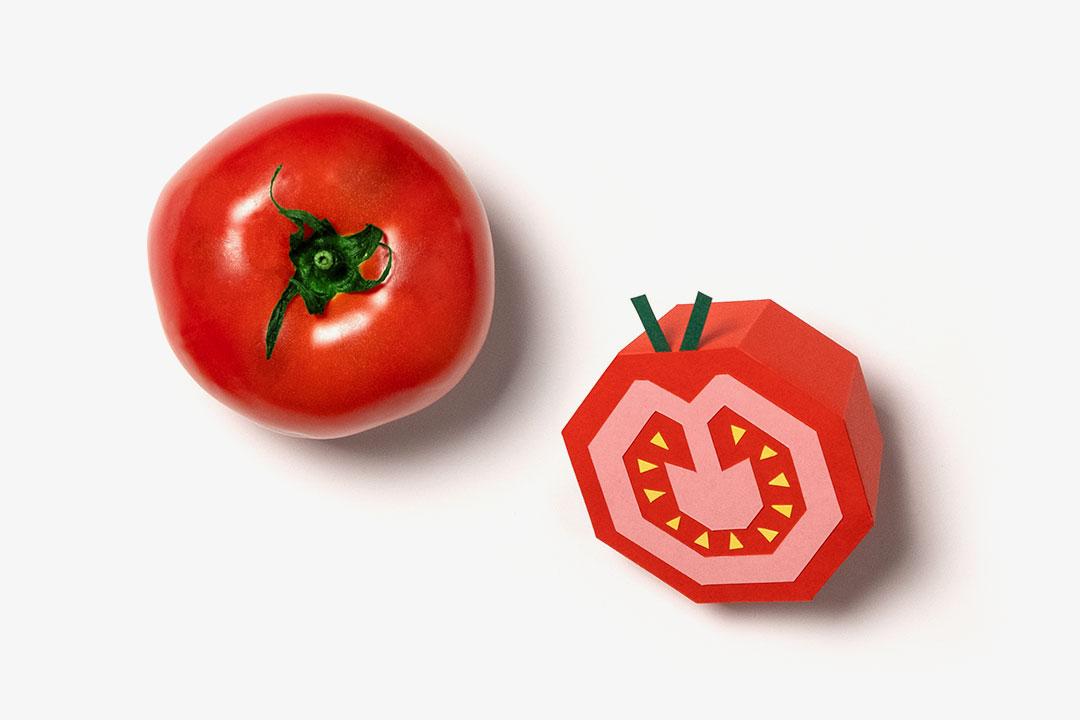 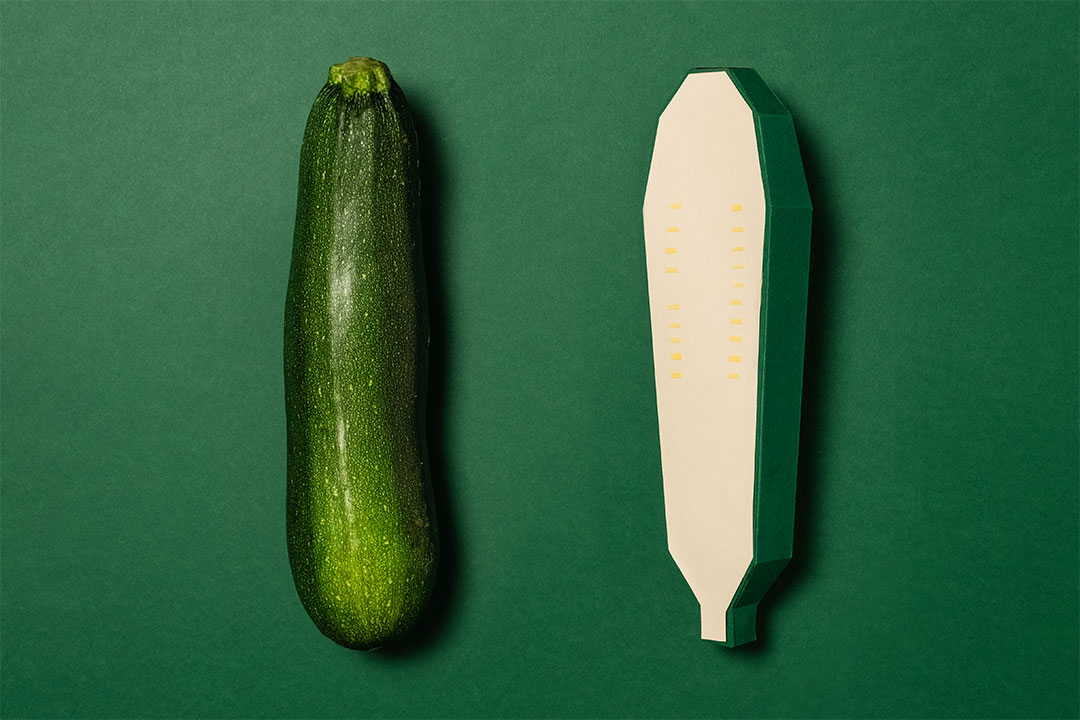 AS RED AS A TOMATO

Despite botanically being a fruit, the tomato is generally eaten and prepared like a vegetable. The first tomatoes in Europe may originally have been yellow. They were first referred to in writing as pomodoro (the Italian word for tomato), meaning “golden apple”. Tomatoes are the number one selling vegetable in Ara, the Group’s food retail chain in Colombia. In Poland, the Malinowy (or raspberry tomato) is an heirloom variety consumed in large quantities for its distinctive flavour and exceptional aroma.

Although botanically classified as a fruit, the zucchini is a variety of summer squash widely referred to as a vegetable. Its name comes from zucca, the Italian word for squash. Also known as courgette, this culinary chameleon is a best seller in Pingo Doce stores, ranking 1st in the vegetable top 5. After all, the courgette is a must-have in any soup base made in Portuguese homes.

Biedronka is now responsible for over 25% of the total national distribution of raspberry tomatoes, the equivalent of over 6,000 tonnes in 2020.

As members of the Cucurbitaceae family, the zucchini and the watermelon are closely related.