The Olympic flame is at the heart of the Games’ symbolism. Three athletes are presented as the pinnacle of human achievement: Carlos Lopes, Mariana Pajón and Robert Korzeniowski. 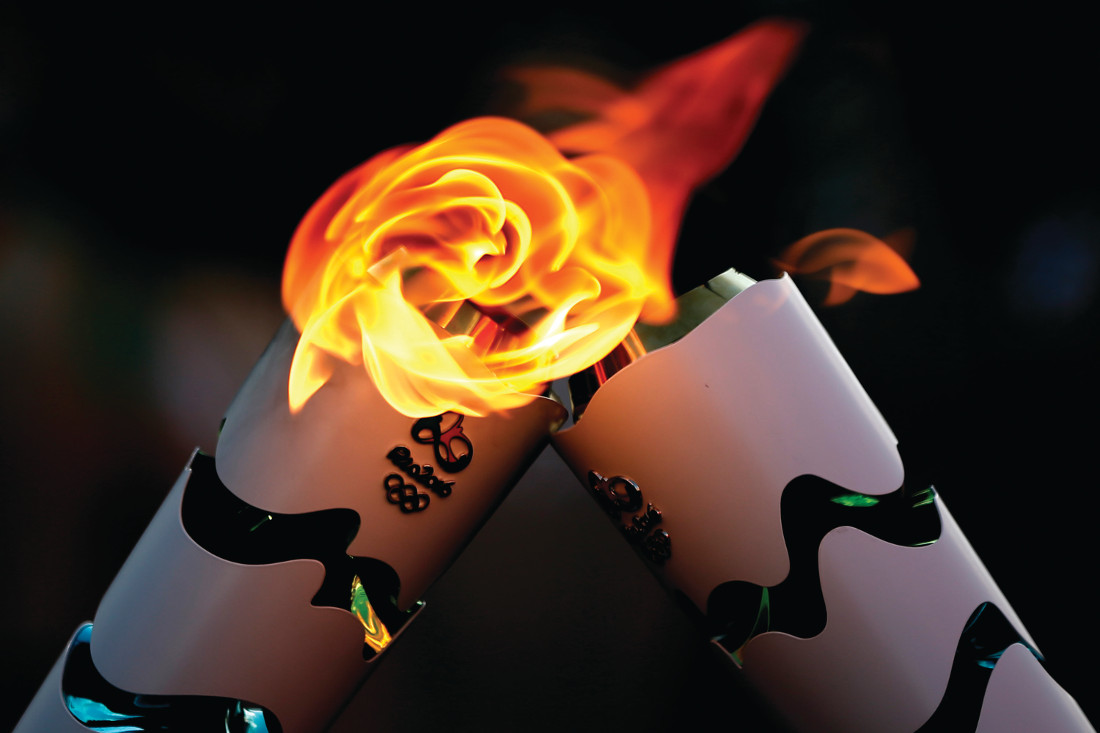 When it comes to the Olympic identity and values, the flame and the torch relay are some of the most well-know elements of the Games, since they represent the positive values that mankind has always associated with fire: birth, development, life and passion.

Originally, a fire was kept burning – due to its association to the divine – during the celebration of the Olympics in honor of Zeus. In the modern Olympic Games – founded by Pierre de Coubertin in 1894 – the flame was reintroduced in 1928, in Amsterdam.

Through the years there have been many ways of transporting the torch, some being quite adventurous and imaginative. While the flame is commonly carried by runners, it has also traveled by dragon boat, airplane, horse, radio signal, satellite, laser beam and under water, just to name a few. It has also traveled through the North Pole and been flown into space. The Olympic torch during the torch relay on May 3, 2016 in Brasilia, Brazil

The moment the flame is passed on from the torch to the ceremonial cauldron has also delivered some memorable moments, such as when Li Ning seemingly “ran” on air around Beijing’s National Stadium lighting the flame, at the 2008 Olympics.

The lighters of cauldron, the final torch bearers, are usually famous former athletes with significant achievements in sports or even persons that symbolize the Olympic ideals. One of the most historically significant torch bearer was Yoshinori Sakai — a Japanese runner that was born in Hiroshima on the day the nuclear weapon devastated the city — who opened the 1964 Tokyo Games as a symbol of the rebirth of Japan following the Second World War.

The following Portuguese, Colombian and Polish athletes are perfect embodiments of the Olympic ideals, which are very much connected with the Olympic flame’s symbolism regarding human achievement: excellence, friendship and respect.

WAS THE FIRST PORTUGUESE ATHLETE TO EARN AN OLYMPIC GOLD MEDAL

In 1984, when Carlos Lopes reached the final metres of the marathon, the sports commentators noted how comfortable he looked, even more than in training runs: “he looks happy, he looks relaxed, his concentration has been great, he hasn’t changed his pace at any point in the race”. This just goes to show how sure the Portuguese athlete was not only of his capabilities but also of his ability to win gold. This confidence came after years of pushing through his limitations and accomplishing a stellar preparation. Even after arriving to Los Angeles, his dedication was exhibited by his complete focus on the task at hand: to be that year’s marathon man.

Carlos Lopes’ name is written into Portuguese sports history as the first man in Portugal to secure a gold medal – the maximum achievement an athlete can get in the Olympic competition – for his country when he won the marathon at the Summer Olympics in Los Angeles 1984.

When inquired whether he suffered a lot during the difficult 42,195 km run, Carlos Lopes answers that, although it was hard, he never suffered while running because he always did it for pleasure. Lopes stresses his preparation – two years and a half of raw determination – and how that was the decisive factor during the event. In fact, he considered that to be one of the events in which he participated that had been the least arduous. Carlos Lopes victorious, after winning the Men’s Marathon with an Olympic record time of 2h09m21 at the Memorial Coliseum, Los Angeles

Just three years shy of turning 40 years old at the time, Carlos Lopes proved his age would not prevent him from leaving an indelible mark in the world’s history of sports. Despite the fact that Lopes was run over by a car while training in one the busiest roads in Lisbon – Segunda Circular – just 15 days before the Olympic marathon, the Portuguese runner miraculously didn’t get hurt – in fact, the first thing he did following the accident was to test himself to see whether he could still run. His return to the Olympic Games in 1984 was signaled by a change: instead of running the 10,000 metres event he went for the marathon, even though he had previously only entered in three events of this discipline and had actually only completed one.

During the marathon, at the 34.5 km mark, he left his competition in the dust and, employing his fearsome speedy spring, Carlos Lopes ran the remaining kilometres in a whopping 14 minutes and 33 seconds. He won the first place at the podium with 200m and 35 seconds of advantage, reaching an Olympic record time of 2h09m21, which stood until very, very recently, when the young Kenyan Sammy Wanjiru was able to finally break it, at the 2008 Beijing Olympics. If the Olympic ideals are linked to human achievement, Carlos Lopes has embodied, through his life’s accomplishments, the joy of effort characteristic of Olympic athletes. His story is inspiring for many reasons, especially considering his humble origins. Born in a small town, Carlos Lopes worked as a stonecutter’s helper even while finding his passion his life as a competitive runner. He dreamt of playing for the local football team, but due to his father’s opposition, he turned into other forms of athletics. In 1967, he is recruited by the athletics department of Sporting Clube de Portugal, in Lisbon, where he connects with his only coach, Mário Moniz Pereira.

RECEIVED THE HONOUR OF BEING AWARDED THE ORDER OF BOYACA DECORATION

As Mariana Pajón was positioned to start the BMX event at the 2012 Olympic Games, wearing her signature different-coloured gloves and socks, she had already had a fantastic day, even week, until then. The very fast event begins and, almost immediately, Pajón is in the lead and while her opponents may have flanked her, the race was hers to win. Following her recovery from a crash-related injury in California a few months before, the Olympic race at the 2012 London Games was the first Pajón was able to run. During the semifinal races (in three different occasions), Mariana Pajón won easily and, by the time she competed in the final, the “BMX Queen” managed to triumph, in what has been described as an “awe-inspiring fashion”, by three tenths of a second over the New Zealander Sarah Walker and the Dutch Laura Smulders who took, respectively, silver and bronze. Pajón led the eight-rider field after the first curve and never looked back, fulfilling a lifetime dream of hers.

The London 2012 Olympics – where Mariana Pajón was her country’s flag bearer – ended up being very successful for the Colombian contingent, which garnered a national record of 8 medals – one gold, three silver and four bronze medals in cycling, weightlifting, judo, taekwondo, triple jump, free-style wrestling and BMX – and ranked in 33th place among 205 countries.

Even though she was already an icon in Colombia by the time she won Olympic gold, Mariana Pajón admits that her life “changed considerably” after the epic win in 2012. Aside from needing the occasional personal guard, Pajón became increasingly aware of her position as a role model for the next generations. This, unsurprisingly, is the marking of a true Olympic athlete and the value of providing a good example for others to follow on her footsteps (or tires).

While Mariana Pajón may have some very fierce competition in her category of sports, the Colombian BMX champion emphasizes that she always runs against herself and nobody else, for the pleasure of riding and for the thrill it provides her, underlining her courage and the discipline necessary to thrive in this sport.

More than winning, it is about fighting fairly and expertly

The Paisa native was born into a family committed to sportsmanship. Mariana’s father was a car racer and her brother a talented kart racer. When she was three years old, the soon-to-be BMX specialist started riding bikes. At nine, she was already winning her first world championship. From that point on, Mariana Pajón regularly stepped onto numerous BMX podiums in different international races, driven by her love of both vertigo and adrenaline. Mariana Pajón celebrates a win at the
UCI BMX World Championships,
in 2015, at Zolder, Belgium

Even before he defended his Olympic gold medal in Athens, Robert Korzeniowski felt he had nothing left to prove. He had been an Olympic champion, a world champion and a European champion. He knew his worth and loved walking and the sport. He was a content but determined man who competed with perseverance, effort and determination. He might not have had anything else to prove, but Korzeniowski defended the gold and finished his career a gold medalist once again.

The Polish former race walker was an outstanding force within this discipline of athletics. Little did he know, at the age of 15 when he discovered it through his sports teacher, that he would become one of the most successful race walkers at the Olympics, with the exceptional achievement of winning four gold medals (1996, 2000 and 2004). Robert Korzeniowski was the first athlete to claim both the short and the long distance titles at the same Olympics, and the first one to win a race walking event more than twice. Korzeniowski was primarily a 50 km specialist and is a former record holder (2003 Paris), having also won three World Championships and two European Championships. He officially retired after the 2004 Summer Olympics in Athens.

When he took part of the 1996 Atlanta Olympics, Korzeniowski had already a bronze medal from the 1995 Gothenburg World Championship under his belt and his determination had been fueled by his failed previous Olympic participation. Early on, young Robert became the winner of the Polish Youth Sports contest in 1985. At his first Olympic participation, 1992 Barcelona, Korzeniowski was disqualified from the 50km event (he came in second place) – the rules of race walking insist that the athlete must always have one of his feet in direct contact to the ground. He also dropped out of the 20km race in the same occasion. At the time, however, “Korzen” was only 24 years old and failure only powered his determination

The Polish athlete was able to, in the humid heat of Georgia, finish the 50km event 16 seconds ahead of the runner-up, earning him his first Olympic gold. Four years later, at the 2000 Sydney Olympics, in the span of seven days, Robert Korzeniowski accomplished the feat of winning both the 20 km and the 50 km events in the same edition of the Games.

The following Olympics, held in Athens in 2004, marked the Polish walker’s fourth participation at the sporting event, at the age of 36, accompanied by his loyal coach Krzysztof Kisiel. As the sun beat down relentlessly, the Polish walker focused unwaveringly on his technique: maintaining a rhythm efficient enough that would allow him to not overexert himself. Gradually, Korzeniowski started to lead the competition, earning the gold in 3h38m46, more than four minutes ahead of his nearest rival. This victory signaled his fourth Olympic gold medal, a three-peat never accomplished before.

After retiring from competition, among other responsibilities such as working for the Polish Public Television’s sports department, Korzeniowski became heavily and actively involved in various roles at the International Olympic Committee, becoming a great ambassador for his former sport and upholding the Olympic ideals by educating the youth through sport within the Olympic spirit.