16 Jul There’s a Light that never goes out

There’s a Light that never goes out

Lighthouses are majestic places that don’t belong to the ocean nor to the land. Even with the massification of the GPS and advanced technology used in boats, these magical guardians still shine. 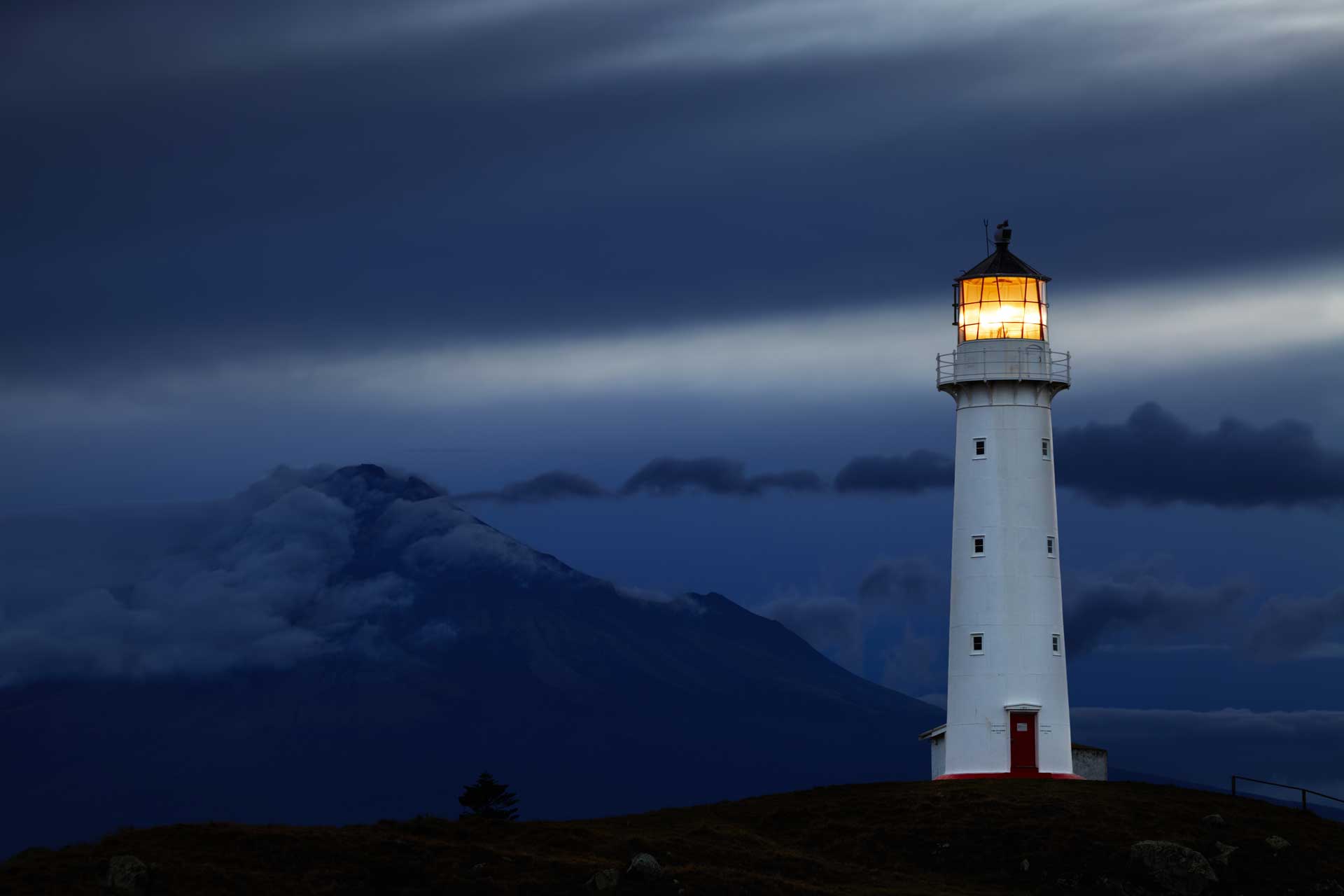 THE SENTINEL OF SANTA MARTA

Out in the Caribbean, ahead of the bay, there is a rocky island which greets new arrivals. From its highest point, flashes the beacon of the Faro del Morro lighthouse, also known as the Farol de Santa Marta, being a symbol of Colombia’s oldest city. The original structure dates to 1869, roughly a century after Governor Rosales Trancoso ordered the construction of the Santa Ana fort on the island, 62 metres above sea level. The history of the lighthouse is intertwined with that of the fort, from the ruins of which it rose. It is linked to the legends, triumphs and tragedies of Santa Marta, at two contrasting moments in its history. 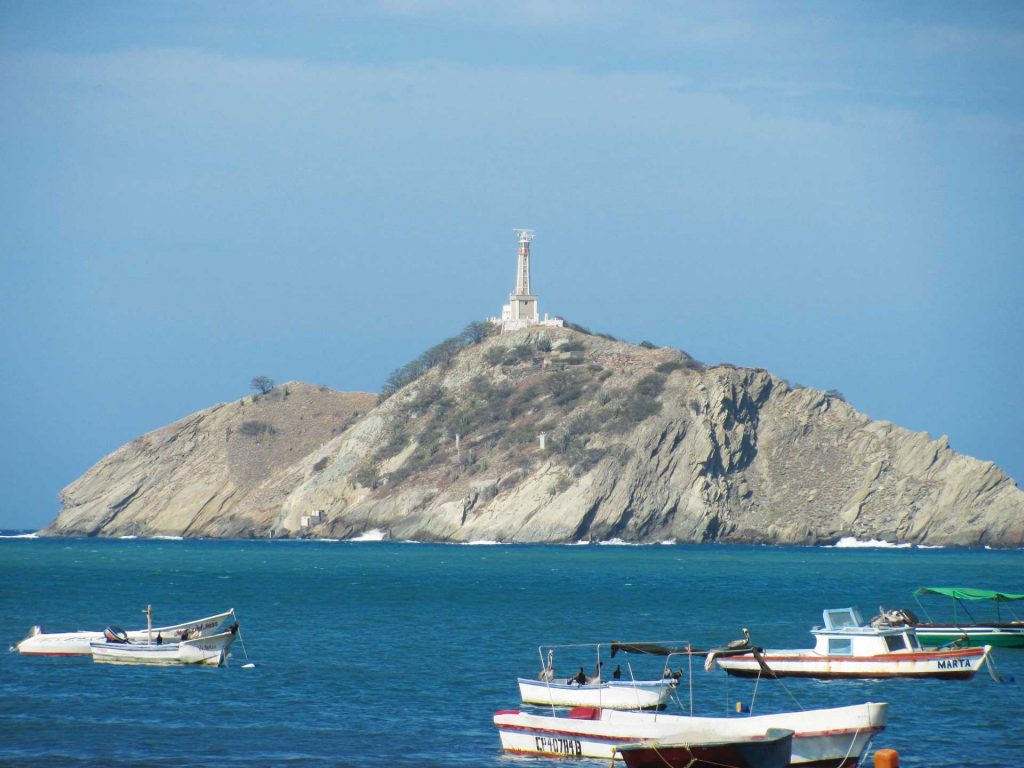 By day, the lighthouse makes the foam of the waves shine with another light.

Located at the foot of the Sierra Nevada, Santa Marta was the second Spanish settlement in South America, founded on the 29th of July 1525 by the conquistador Rodrigo de Bastidas. During the period of conquest and colonization, the island protected Santa Marta from the attacks of English pirates in search of gold and jewels. In 1816, the stronghold was home to the last viceroy, General Francisco de Montalvo, and during the War of Independence – which took place over six battles between 1813 and 1823 – it served as a prison for criollo insurgents.

When Simón Bolívar – El Libertador – died in 1830, shots were fired from the island in mourning. The Venezuelan general and politician had fought the Spanish colonial army, supported by the United Kingdom, liberating Colombia in 1822. Photographs from a visit to Santa Marta bring back the image of the lighthouse which, by day, makes the foam of the waves shine with another light: that of its lonely, fragile beauty.

People would flock there to watch the sunset and the twilight.

There is also the beauty of the island itself, a sacred place for local indigenous people, who would flock there to watch the sunset and the twilight, when the sun would marry the moon and create the stars and constellations. Unfortunately for the romantics, the current tower is not the original: unveiled in January 1999, the lighthouse as we know it today is of a hexagonal design, 22 metres and four storeys high. It is solar powered. In the 2013 film El Faro, directed by Pacho Bottía, the structure illuminates the life of Ángel, a lighthouse keeper who has an eternal promise he must fulfil. He rescues a shipwrecked couple who, enchanted by the island, quickly find themselves forced to choose between a dream of love in distant lands and the dignity of a place forgotten by the world. 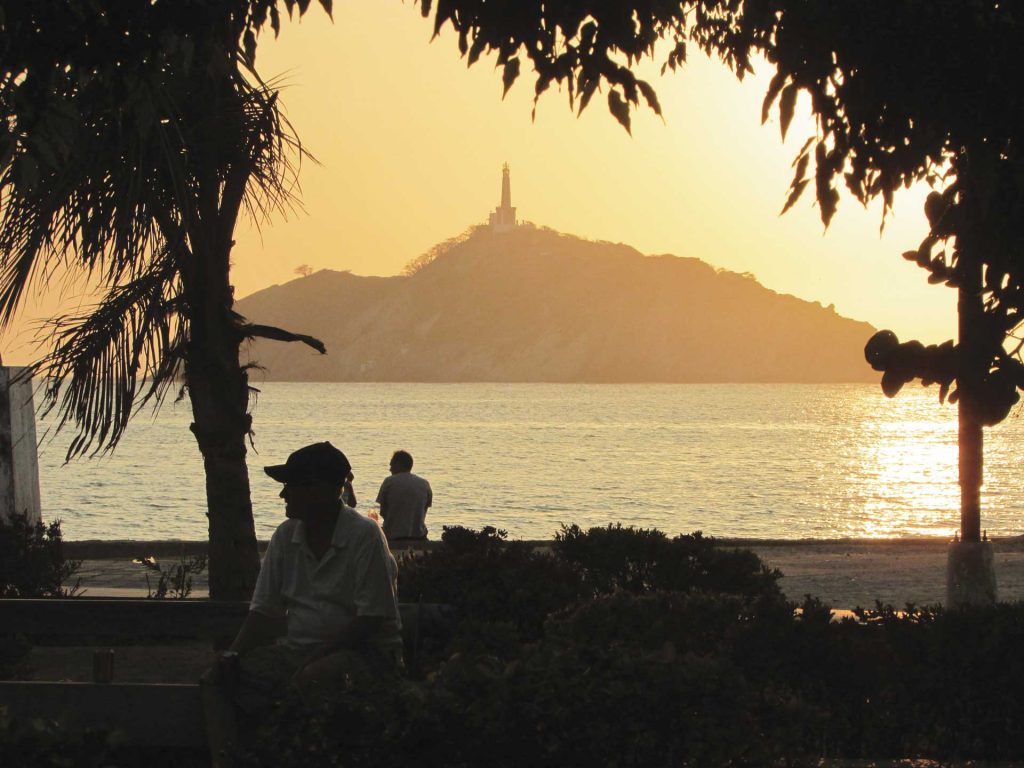 A BREATHTAKING WINDOW ON WWII

By the second half of the 19th century, the Neufahrwasser (Nowy Port) district became an important place for the trans-shipment of cargo, for in 1867 it was linked to Gdansk by rail. The necessity of having a higher light, placed at least 23 feet above mean sea level, to guide ships passing by the Hel peninsula, led the Gdansk authorities to build a new lighthouse. 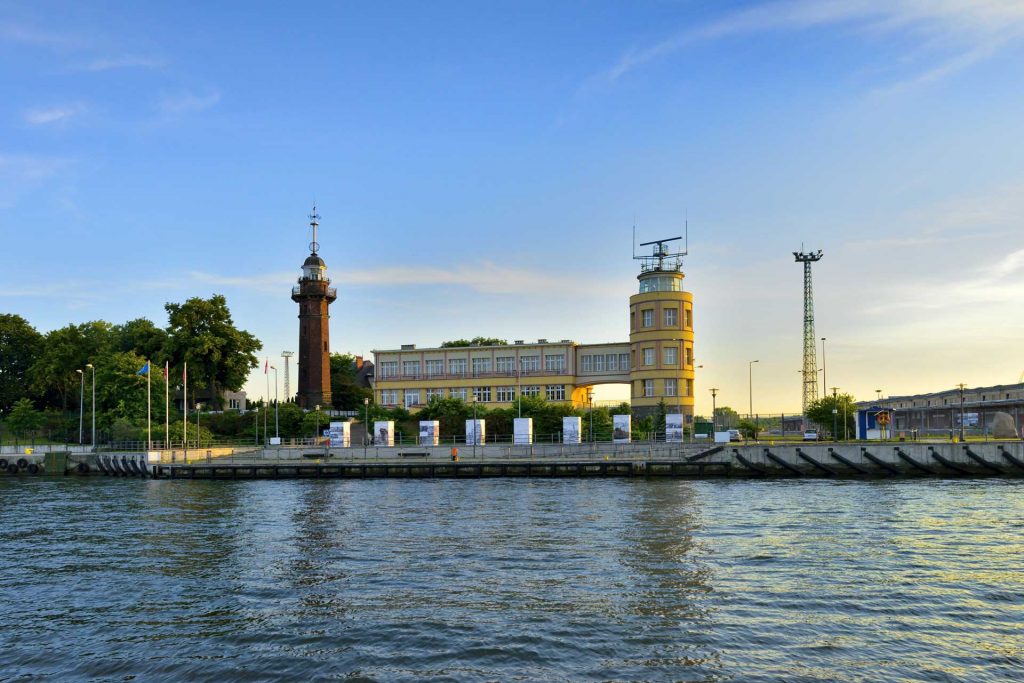 Until the end of August, you can reach the lighthouse by water tram. It stops at the lighthouse after dropping off at Westerplatte, on the opposite bank.

Builtin what was the then prevailing style of “Renaissance Gdańsk,” with its typical red bricks, the lighthouse at Nowy Port came into operation in 1894. Crushed rock combined with concrete was used in the construction of the 89 feetoctagonal tower, whose silhouette is said to have been inspired by the one of a long-lost lighthouse built in 1871 in Cleveland, Ohio. The centrepiece of the lighthouse is a very useful, yet rare instrument in maritime navigation, called time ball. Its dropping at noon would enable ship’s captains to set their chronometers with precision. The building was also a station for the harbour pilots. Equipped with binoculars, they would observe nearby ships through a window or from the balcony, then run down the stairs to the nearby moorings, enter a boat and row in the direction of the vessel, leading it through the port channel to the city quay.

The Nowy Port lighthouse made history when, on September 1, 1939, at 4:45 AM, shots fired by the German armed forces commanded from its upper floors signalled the start of World War II. The Polish soldiers fought back with a 75mm field gun and, at the second firing, the tower was seriously damaged. The Germans immediately rebuilt the façade, but the traces of this event remain visible to the naked eye. 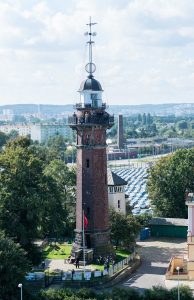 The city’s Nowy Port Lighthouse was inspired by a long-lost lighthouse built in 1871 in Cleveland, Ohio.

The Port of Gdańsk kept growing, making it essential for a larger modern lighthouse to be erected in a new place. Therefore, exactly 90 years after being commissioned, the structure extinguished its light in 1984. But then, in the ninety nineties, Stefan Jacek Michalak, a Pole who had lived in Canada for 30 years, set his eyes on it in one of his visits to the country. Amazed at the beauty and symbolism of the building, he told himself, “That’s for me! The lighthouse must be mine!”

To Stefan, a qualified engineer, these beacons of fire represent all that is best about human beings: the desire to warn of danger, the desire to save in a disaster, the desire to bring help to survivors and the desire to point to a proper way of life. His fascination with this particular lighthouse intensified that passion and led him to the decision of presenting the Gdańsk city authorities and by the Gdynia Maritime Bureau a restoration project, regarding the idea of opening the lighthouse to the public. After years of renovation works, in 2004, the Nowy Port Lighthouse began a second life as a historical monument to be visited.

Open from spring to autumn, it is now the only privately-owned lighthouse in Poland. A total of 114 steps lead to the very top, where a light again burns and one can admire the breathtaking view over the port, the entire Bay of Gdańsk and Westerplatte, on the opposite bank. Inside, there are examples of preserved optical equipment and an outstanding miniature lighthouse museum. Among the objects on view, there is a telephone from the turn of the 20th century that the Gdańsk lighthouse keeper would use to communicate with the port captain.

Nearly half a century after the opening of the Barra de Aveiro sandbank in 1808, the long stretch of the Portuguese coastline between Cabo Mondego and Foz do Douro still did not have a lighthouse to guide maritime traffic. With the first hills a long way inland, the flat coastline produced an illusion of distance, and shipwrecks were common. To resolve this problem, Fontes Pereira de Melo, minister of Public Works, published a decree on the 28th of January 1856, addressed to the ministry representative for the district of Aveiro, Silvério Pereira da Silva. This provided instructions for the construction of a lighthouse – what is today the Farol da Barra.

A n article from the journal Arquivo do Distrito de Aveiro, by the renowned local historian Francisco Ferreira Neves, recalls the concerns outlined by the minister in the decree, which referred to the “harm that may be caused both to human persons and trade” due to the “lack of light signalling along this stretch of the coastline.” Despite the urgency, work did not begin with the desired promptness, resulting in further human and material losses.

Finally, the municipality took action: in September 1862, the Municipal Chamber of Aveiro made a petition to the king, Dom Luís I, requesting the construction of a lighthouse at the southern end of the sandbank. The petition included the following: “No-one can be in any doubt, Sir! On a stretch of coast so long and dangerous, where sandbars and shoals are formed by violent currents, the direction of which changes daily, a lighthouse would ensure that ships sailing close to the land do not go astray.

They would overcome the difficulties of navigation, without running the risk of shipwreck upon the sandbanks, sometimes even on calm nights, as unfortunately has been known to occur.” Nearly a year later, a fresh decree ordered the realisation of the project, with a corresponding budget. In March 1885, construction of the lighthouse began on the Praia da Barra, the work of the engineer Paulo Benjamim Cabral. 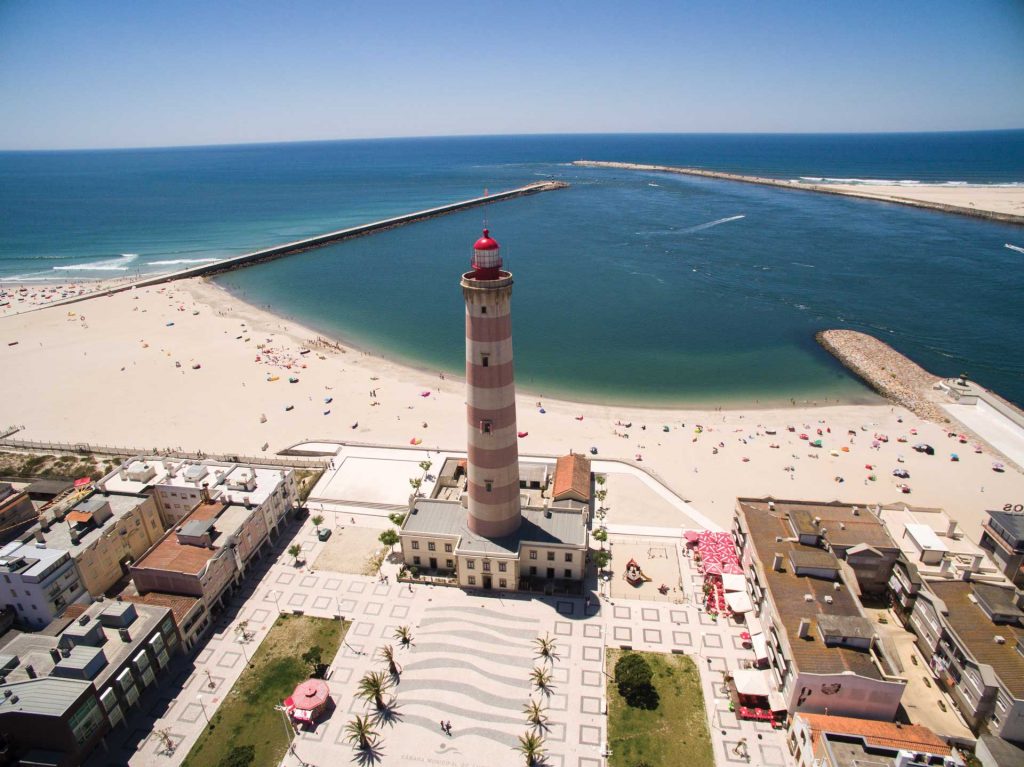 The tower is made from stone and coloured in white and red stripes.

Beneath the Glow
Dancing with the Light
Glow: Animals with Their Own Night-Lights
Light in History
“Led” it be at Jerónimo Martins