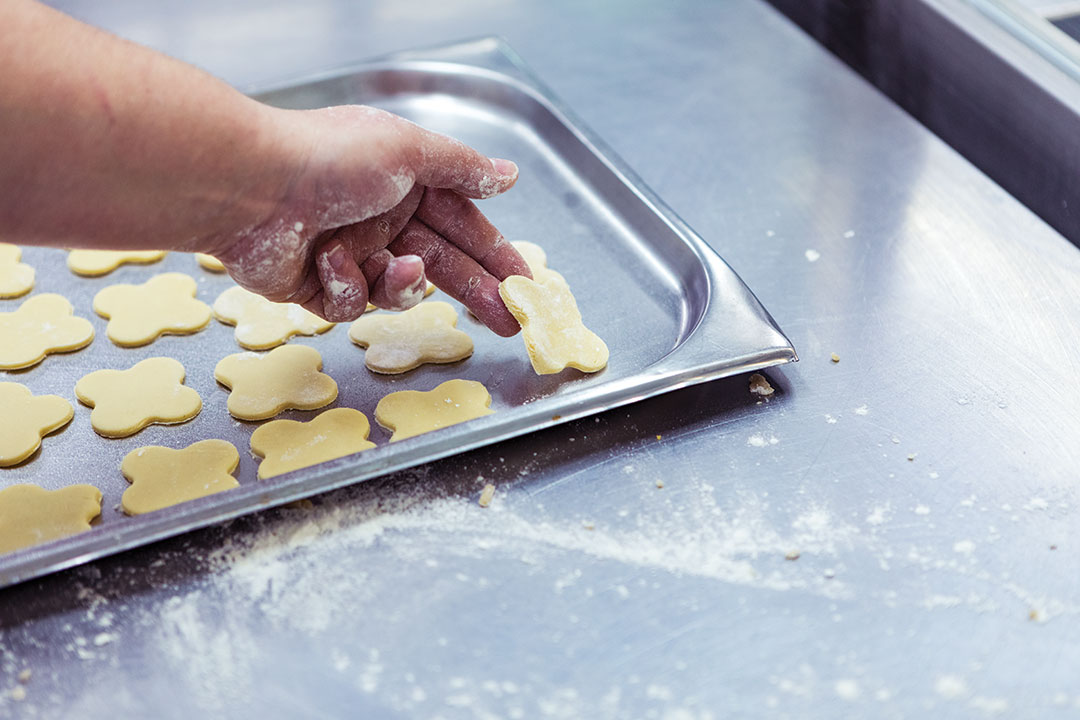 GIRLS THAT BECOME MOTHERS BEFORE BEING ADULT WOMEN

Not all stories that have a happy ending start with a “Once Upon a Time”. But what tells us whether or not it’s a good story is its ending, not how it begins. Since 1931, Casa de Proteção e Amparo de Santo António (St. Anthony’s Home for Safe Haven and Support) has taken in young girls in search of a happy ending for their stories, which started when they found out they were to be mothers before becoming adults and, more often than not, before being daughters themselves.

Casa de Santo António is a Private Institution of Social Solidarity (IPSS) of confessional nature. It was founded in 1931 with the mission to support the cause of unprotected motherhood. The institution is divided into three “homes”: Casa das Mães (Mothers’ Home), Casa das Crianças (Children’s Home) and Casa dos Sabores (Flavours’ Home).

If the walls at Casa (“home”, in English) could talk, they would tell moving stories to those who visit: “my grandfather was a gynaecologist and obstetrician at the Alfredo da Costa Maternity Hospital. In the olden days, mothers were only sent home after a few days. Today, they are sent home the day after giving birth. And when my grandfather was going to discharge them, many of the girls would grab onto him and beg him to let them stay”, says Mafalda Simões Coelho, director of the institution.

They had either been kicked out of the house by their parents for getting pregnant, or they weren’t financially, psychologically or emotionally able to raise a child. “That affected him deeply. And he had a sister who was married and didn’t have children, which was heartbreaking because she had such a way with kids. The kind of great aunt that gave herself completely, spoiling them. So, my grandfather decided to give her a five-bedroom apartment which she could use to take in these mothers, give them jobs, teach them to take care of household chores”, recalls Mafalda. 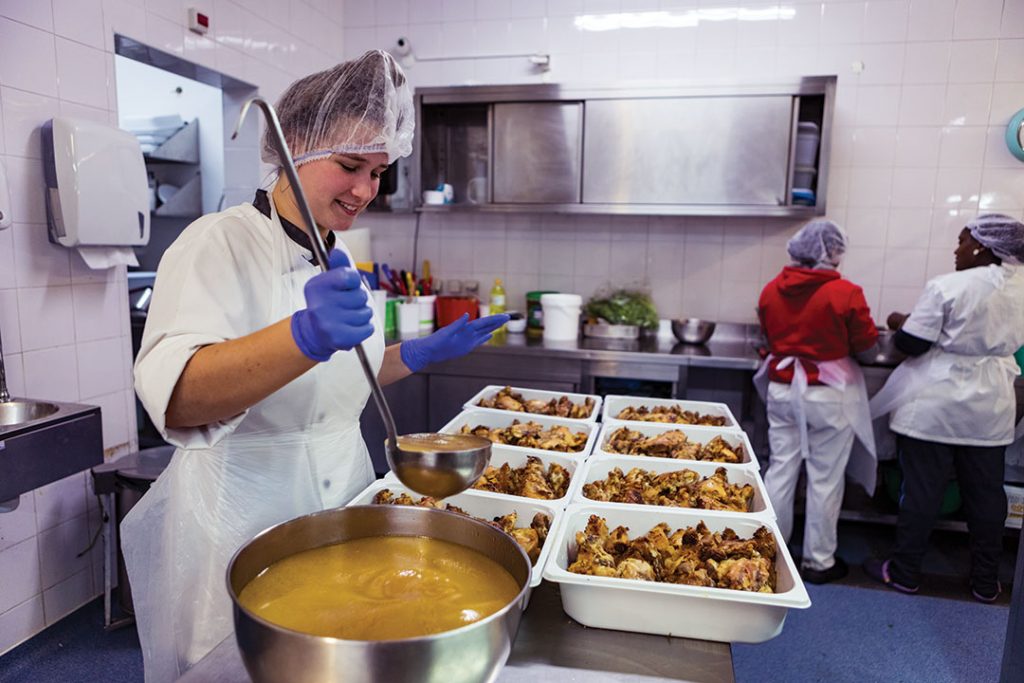 There were so many requests to take refuge at the home, a small apartment in the noble Estrela quarter in Lisbon, that, after three months, there were no more vacancies. The waiting list grew longer and they had to find a bigger space. In the beginning, they occupied part of a detached house which belonged to a British lady. Sometime later, the lady wanted to sell the property, which would eventually be bought by the Santa Casa de Misericórdia charity and leased to Casa de Santo António for a symbolic amount.

“A religious order looked after the house and the sisters cooked. The President of Casa de Santo António had a lot of friends who made donations to help Casa. Games of canasta, teas and markets in the Estrela garden were held to raise funds. Her friends would help the mothers do everything, even embroidery… To this day, my mother still has embroidered sheets some of the women made at the time”, says Mafalda. 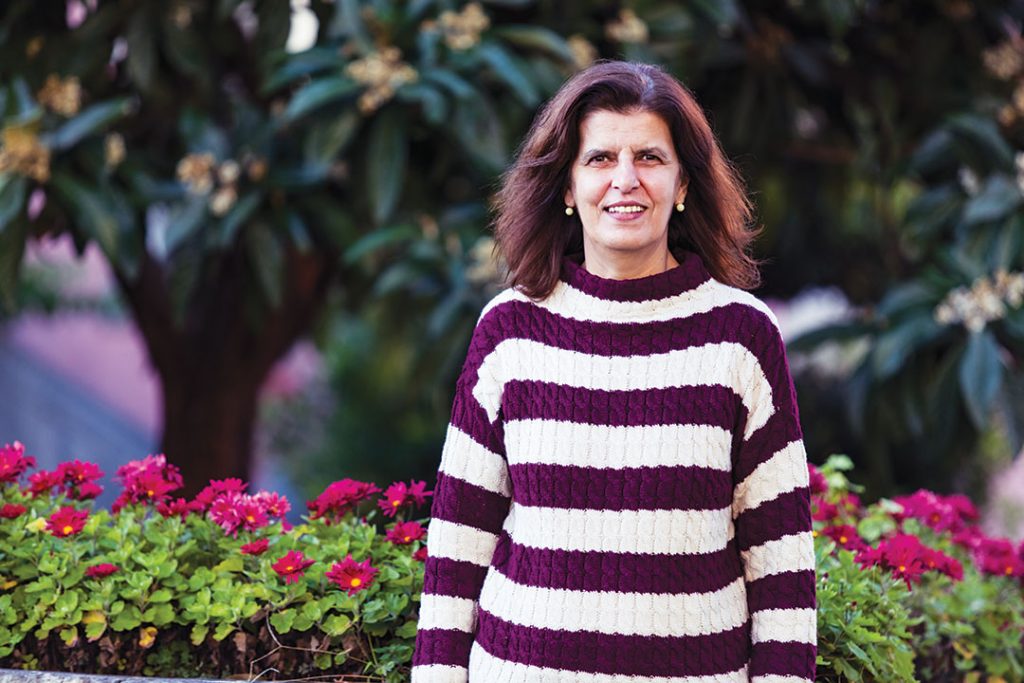 Mafalda Simões Coelho
By leading Casa de Santo António, Mafalda is continuing the work of her great aunt, who gave shelter and took care of the first mothers in the 1920’s.

COOKING UP THE FUTURE

The home continued to grow, underpinned by new pillars to help finance its mission: thus, Casa das Mães was founded and then, in 1945, a day care open to the public called Casa das Crianças was inaugurated, followed by Casa dos Sabores in the 1950s. The bakery-slash-kitchen’s story also started in a rather unusual way, with the teas being prepared by young mothers, under the watchful eye of patrons/volunteers who donated their know-how and time to the institution: “We baked cakes in a room that had its windows all facing outwards, in what used to be the kitchen.

Once, we were baking biscuits for tea and one of the girls suggested making bags to offer the ladies that stopped in for tea. One of the girls decided to go to the window to ask whomever happened to pass by if they wanted to buy a bag of biscuits and a lady asked how much they cost. They sold them at a random price and gave the money to the home’s president. The next day, the same lady tapped on the window and asked for two more packets. And that’s how the orders started.” 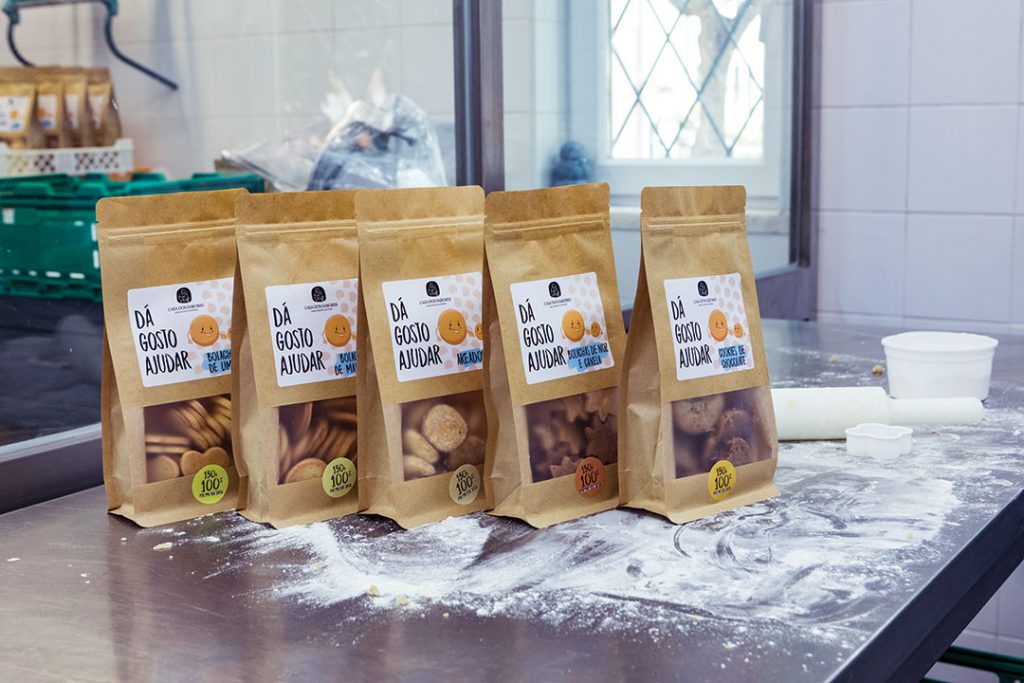 Taste of Tradition: These biscuits are made with ancestral recipes that spanned over generations.

Nearly 70 years later, the recipes that filled the air with a delicious aroma in the afternoon back then are the same recipes used by those who are cooking up the future of the families that reside there today. The smell of the freshly baked biscuits wafts through the air as soon as you walk into Casa dos Sabores. To the side, a cupcake-shaped sign hangs from a magnet warning that, within the next two weeks, an order of 400 packets of biscuits and 200 jars of jam must be ready.

Vanessa, one of the mothers at Casa, helps a relentless Ana during the Christmas season, one of the busiest times at the bakery. When she came to the home, her son Igor was only six days old. She was 15 and in eighth year when she had him. 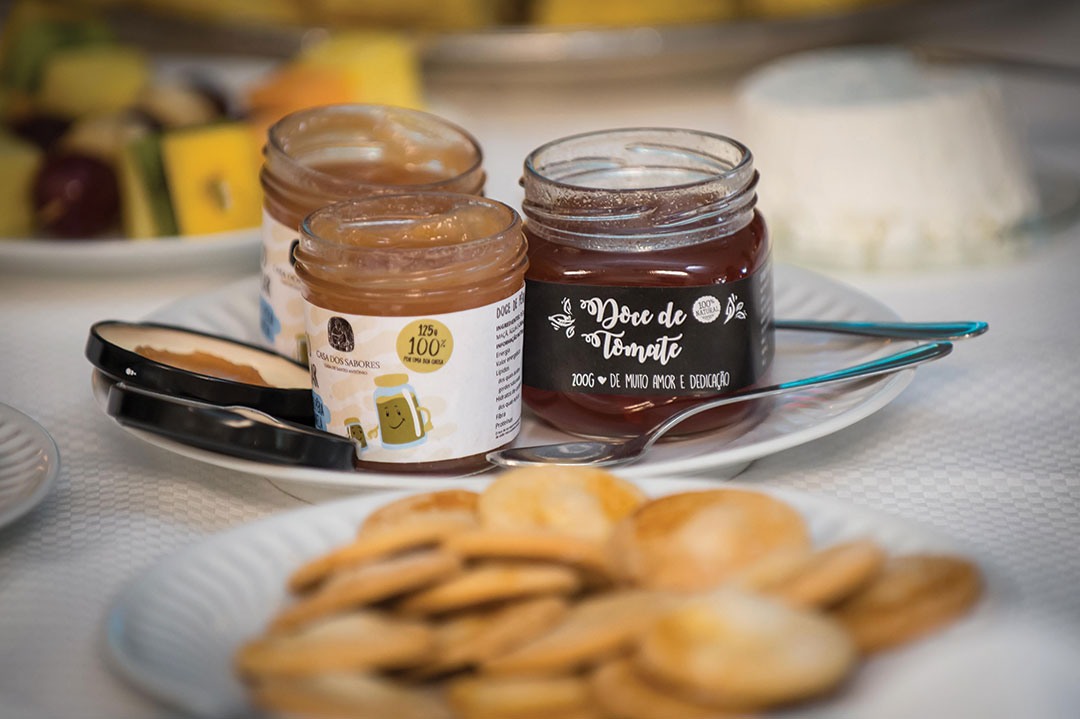 The Taste
of Solidarity

She asked for shelter at the institution because “things at home were really bad”, she explains. She finished her compulsory education by taking a course in computer science which gave her an equivalence to high school graduation, she’s done temp work and is now looking for a job.

“In these past four years, I feel like I’ve grown and changed a lot”, she confides. She is enjoying the experience and can even see herself organising events in the sector, but what she loves most is to dance: “I was at a school, in Sintra, where I learnt Hip-Hop and belly dancing. Now, I’d like to learn ballet. I also like to mix styles, Hip-Hop with Afro, for example.”

Casa das Mães, which belongs to the institution, is home to 13 mothers and 14 children.

Given her mix of Angolan, Cape Verdean and Portuguese roots, it’s no wonder that she has a passion for African beats. And if, in her case, dance is still a dream, when she looks at Igor, she is certain of one thing: “He is going to be a dancer”, she assures, with a grin on her face. Of the 13 mothers who are living at the home, Vanessa is the one who has been there the longest. Right now, she’s just waiting for an opportunity to open up in the job market so that she can leave and build a new home. Travelling is also something she would like to do. “I want to see London, Paris…” Her son, who is now four years old, has left Casa das Crianças to go to pre-school. “His is very happy. He has friends there and here.” 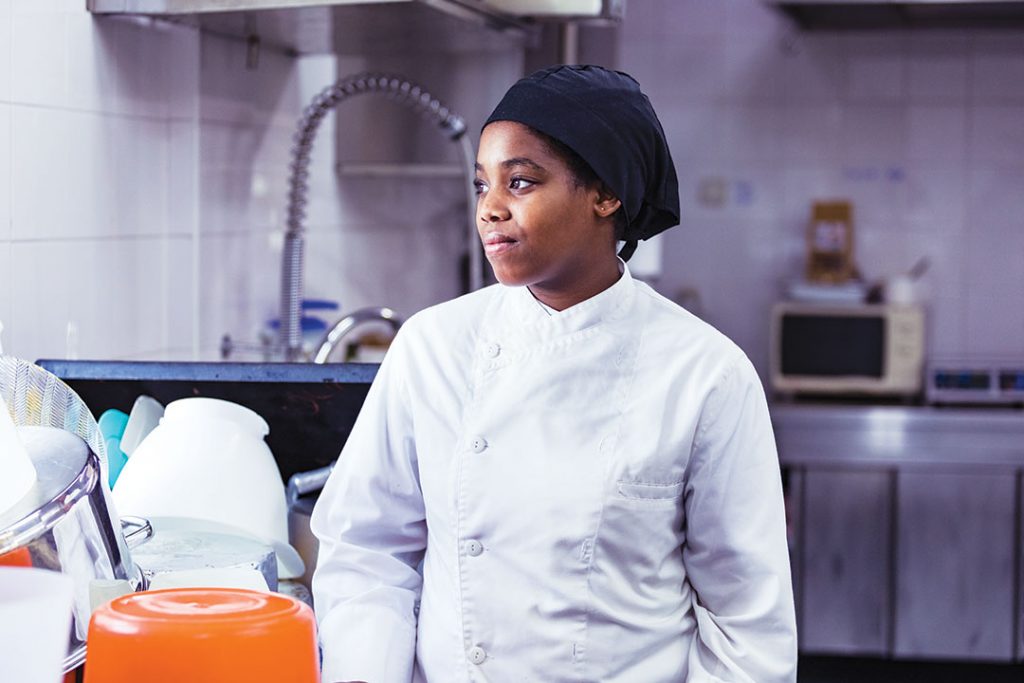 Vanessa Vieira arrived in Casa das Mães when she was 15. She has been in-between temporary jobs while and looking for a stable one so she can have her own home.

Mafalda foresees a brighter future for Vanessa, emphasising her energy, organisation and character: “She never ceases to amaze you.” However, she laments that many mothers who come through Casa are limited to jobs with schedules that can be reconciled with the closing times of free day cares, the most obvious of which is that of housekeeper. That’s why “studying is so important. None of them leave here without completing their compulsory education; 90 % of them don’t have it when they get here. I have a girl who is studying Tourism, one who is taking a course in Culinary Arts, another who is learning to become a hairdresser and one who is already working at a hair salon.”

As challenging as it is to motivate these young women to study and, thereby, give them the tools they need to etch their place in the job market, building self-esteem rewards a past devoid of values and affection: “Some of these girls never even got so much as a kiss. When we ask them how their maths test went, they get nervous, they don’t know how to react, because no one has ever cared”, she says. It’s exactly because she cares and wants to support and protect them that Casa de Santo António was opened. In this big family’s day-to-day life, mothers and their children find the support and hope to make the most of the following day. 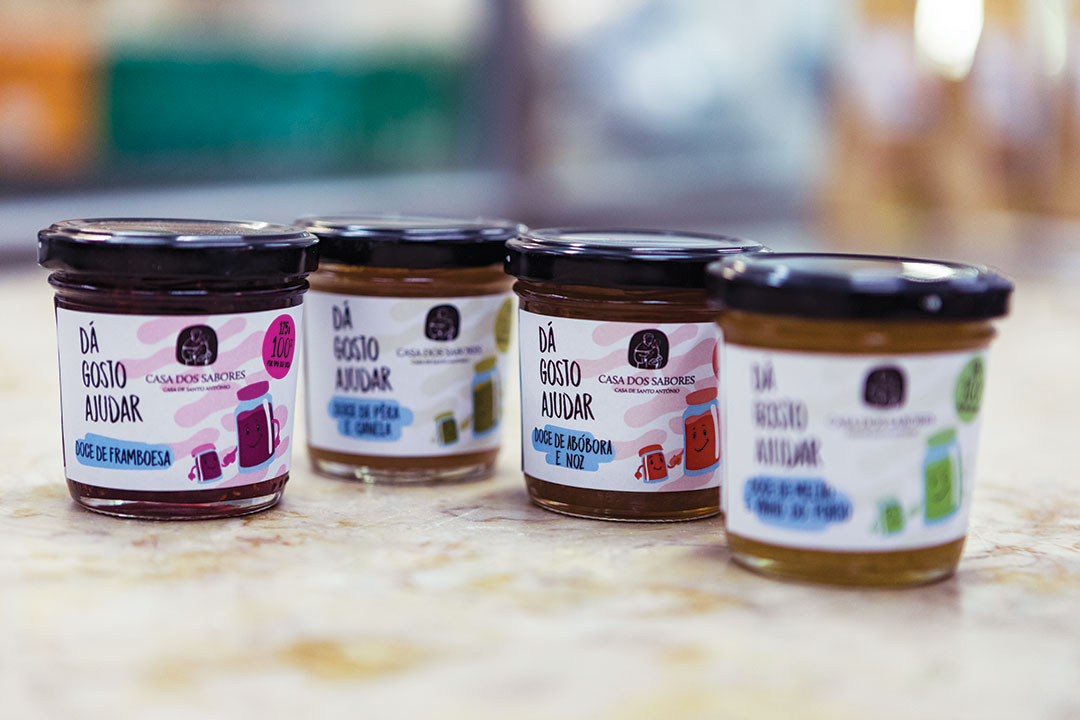 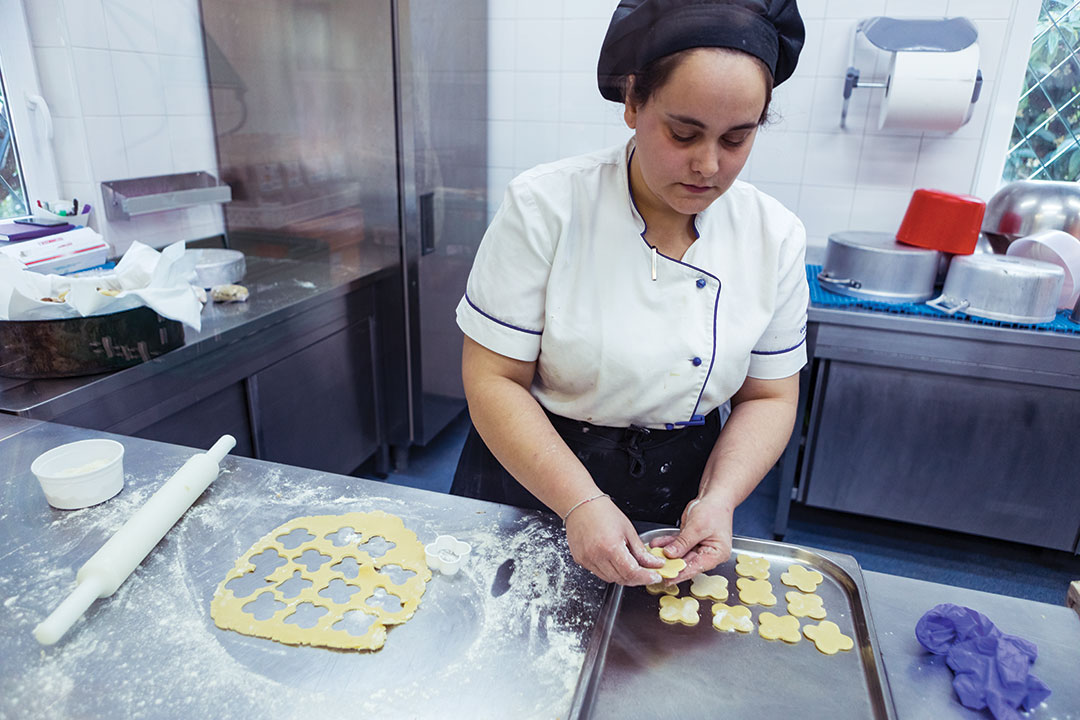 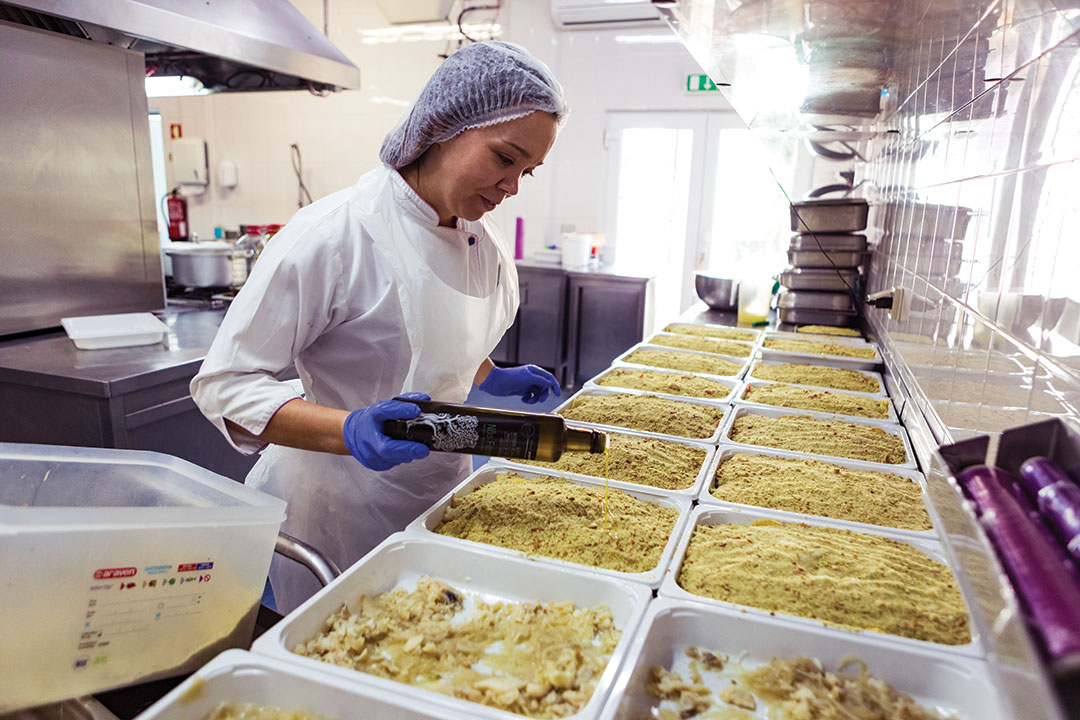