Joinery becomes art in the reinvention of the golden age of Portuguese furniture. It brings back the games tables and counters of the nobility and keeps secrets in hidden compartments, by the hands of the artisans who build unforgettable figures. 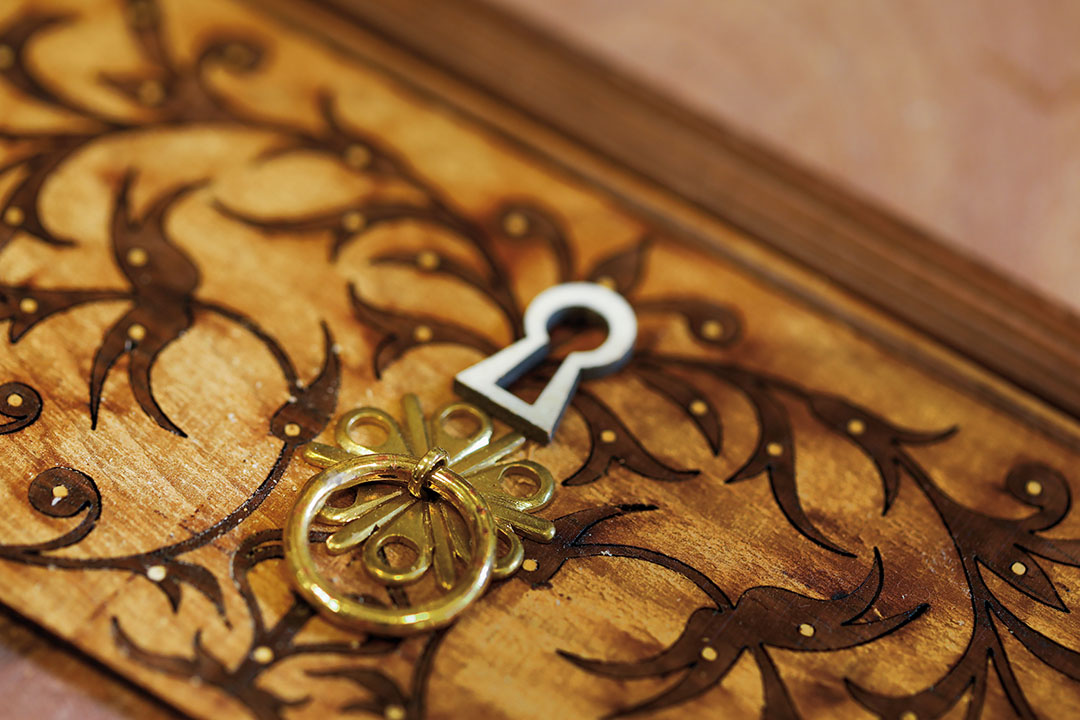 THE MASTER OF SECRETS

How many secrets can hand-carved royal furniture hold? If brilliantly designed by master craftsman Firmino Adão Canhoto, they can hold at least as many as those hidden in the treasures of churches and modern stately homes, or in antique furniture from Portuguese India, made from exotic wood and with rare fragrances. In the Móveis d’Arte Canhoto workshop, located in the town of Mafra, close to Lisbon, these little secrets are designed and crafted. This is where the distinguished 77-year-old joiner and carpenter greets us, wearing his black beret and an apron, and with a pencil tucked behind his right ear, immersed in the luxurious aroma of exotic hardwoods. 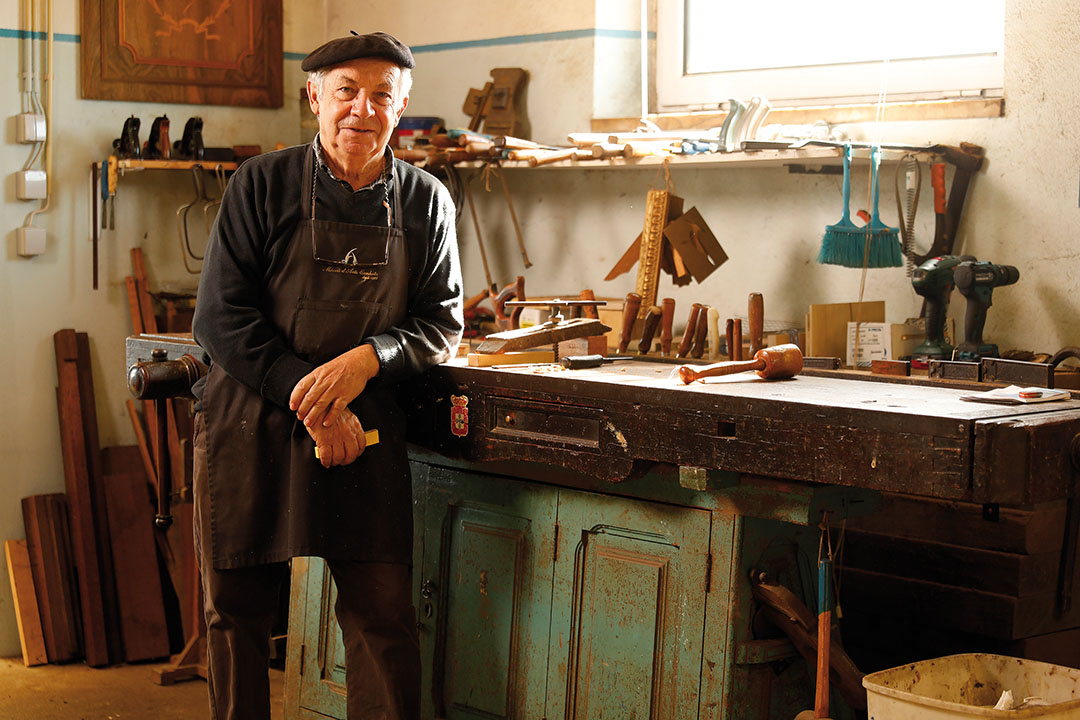 Master craftsman Firmino Adão Canhoto bought this 170 year-old workbench from the widow of José Clímaco, another master who was also his teacher.

They call him the “master of secrets”, in honour of those tiny drawers hidden inside luxury games tables and in the chests that have made customers relive centuries of history for 66 years, as though they were in a royal court. His love for this art started early. “There were several master craftsmen in the village where I was born, Aveloso, in Northern Portugal, including renowned master joiner Quirino, who was my neighbour. Our house, adjacent to his, was made of stone, which was typical of the region.

From the other side of the wall, you could constantly hear the sound of the tapping block and the chisel – traditional tools used for carving wood. “Those were the first sounds that I must have heard, of course, and which unconsciously triggered my curiosity”, he says. While in primary school, he was regularly seen in the joinery workshop. One day, inspired by his son’s fascination, his father asked Quirino if he would like to teach him the craft during the school holidays, to which the master promptly agreed. When he was 11, Firmino received his first pay – three bushels of rye flour a month – and the teachings of a lifetime, one of which was the motto that he immediately took as his own. 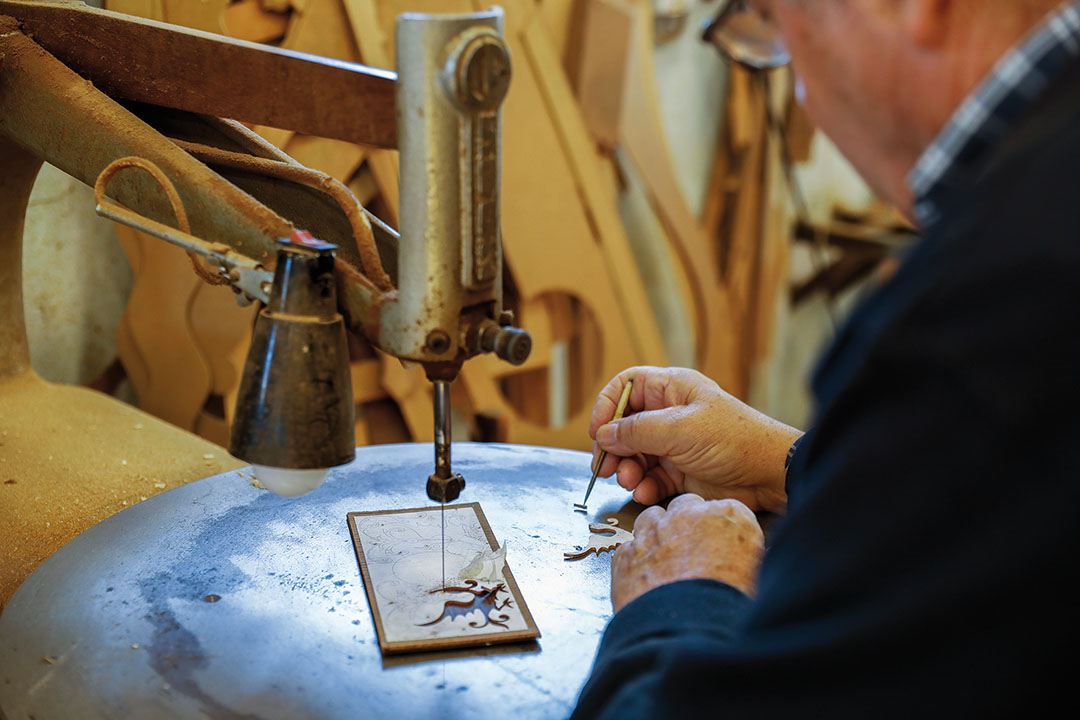 Master craftsman Firmino Adão Canhoto began his career in joinery at the age of 11 and opened his own workshop when he was 18 years old.

“He always said, ‘What’s done right, looks right. When they see one of your works of art one day, they won’t know how long it took to make it. They’ll just say whether it’s done right or wrong’”. His first works were the bancos mochos, three-legged stools widely used in the workshops of old. He explained that his workbench, a 170-year-old one, had been bought from the widow of José Clímaco, another master who also became his teacher. At the same time, he started telling us about how he came to specialise in artistic joinery in Lisbon. As an adult, and in his workshop, he spent many years carving pieces for antique shops, as well as making replicas and restoring other pieces of furniture. “That’s where I learned the traditional techniques of different masters”. Today he applies these techniques and brings them to the present day in the most exclusive pieces of furniture inspired by the styles of the golden age (15th to 18th centuries) of Portuguese decorative art.

Now the time has come for him to pass on everything he has learned to his children, João and Carla, with an 11-year age gap between them and 13 years of workshop experience. “My children have brought innovation and creativity to the Móveis d’Arte Canhoto workshop. We’ve worked as a family for several decades. We help each other out and each one of us has a skill that hadn’t been explored until now.” Carla is an expert in the art of inlay, religious art, painting and gilding. Like her father, the smell of woods piqued her interest as a child.

“When I was a child, I used to hang around in the workshop watching my father and my brother working, and I guess this passion just came from within. Then, when I was older, I used to come here during the summer holidays. My father used to pay me a wage and I’d carve little jewellery boxes. I really fell in love with the art when I saw the design pieces come to life in the wood and turn into the final piece. These pieces also tell us a bit about our Portuguese history – in History class, I also began to associate what I was learning with our pieces of furniture. This passion has stayed with me forever.”

Each piece of furniture is a legacy that the Canhoto family feels the responsibility to respect and preserve.

For João, a master in the art of inlaying, carving and restoration, this passion is a legacy for eternity. “This legacy is a responsibility that our ancestors have left us. These pieces of furniture have stood through the ages. It is our duty to continue this work, as it makes all the difference. So, we are also part of that history.” Firmino’s eldest son is now working on an Indo-Portuguese cabinet that is part of a signed edition limited to ten pieces. He has called it “Tigre” (the Portuguese word for tiger), as it is inspired by the furniture made in Goa from the 16th century onwards.

This item reproduces several figures from Hindu mythology on the surface, as well as the animal from which it takes its name. It was carved in teak, pau-santo, pine and marble, and is lined with velvet. It contains three secret compartments and one secret drawer. “Cabinets were used by merchants to keep the tax money”, he explains. The D. José games table, also known as the Ladies’ Table, is the most iconic and intricate piece made by Móveis d’Arte Canhoto, and perhaps the dearest to Firmino – again, because of the secrets it holds. 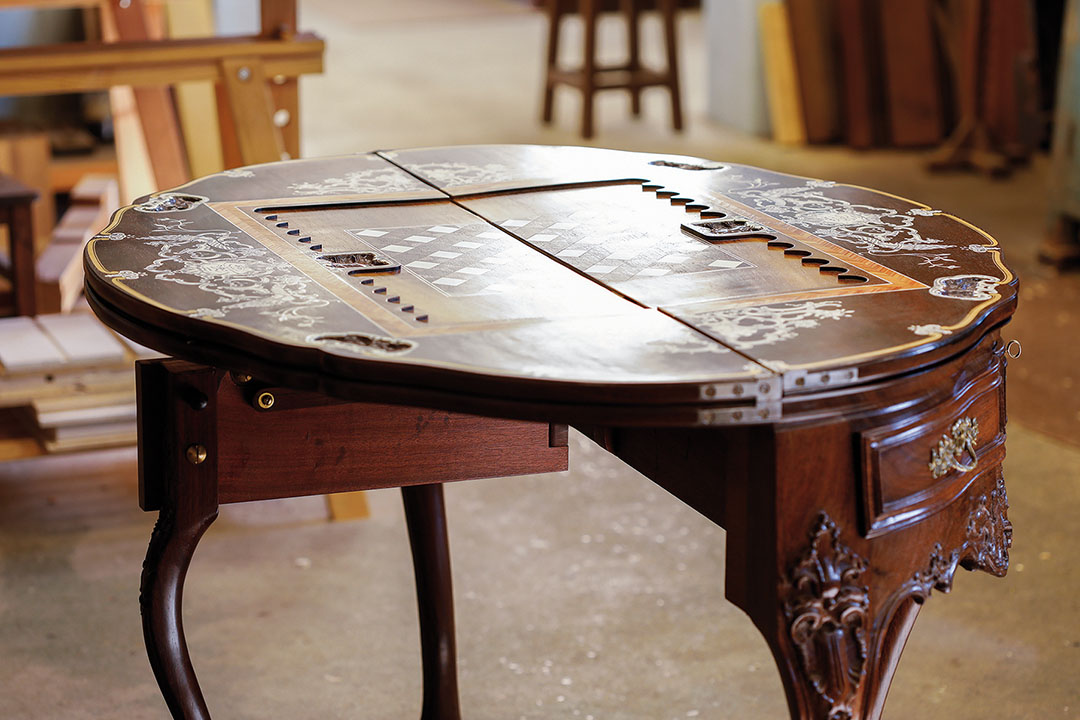 The D. José games table, also known as the Ladies’ Table, is the most iconic and intricate piece made by Móveis d’Arte Canhoto.

“Just like today, 18th-century society was also interested in promoting their social networks through entertainment. During the reign of King D. José in Portugal, when the court travelled to state meetings or from palace to palace, the games table was always there. D. José noticed that the ladies and the queen, Mariana Victoria of Spain, spent much more time playing at the table than the men in the court. So, to please the queen, he ordered secret compartments to be incorporated into the piece.”

The table, which took nine months to make, has four different tops: one to be pulled over to close it, another for card games, the third one for backgammon, chess and draughts and, finally, a fourth one for serving tea, with a concealed dressing table. For Firmino, it took a lot of patience to achieve the final result.

“Wood is a living thing and each type of wood behaves differently… So, we need to be very careful when choosing the materials according to each function of the piece. We use exotic hardwoods, as well as precious metals such as gold, silver and bronze for the decoration or structure. Other natural substances, like mother-of-pearl, are also used for the inlays. Besides having to be familiar with the materials and the art, the first technique an inlayer must master is that of patience! Especially for the game boards on this table.”

Special care must be taken when choosing the main raw material, wood, for example, for the inlays. “The colours of the inlays are the colours of the different types of wood. The wood must be perfectly dry, at least seven years of air drying, preferably in the shade and indoors so that it doesn’t lose its original colour. The wood cutting method itself also influences the final piece, and should preferably be done at the end of summer. Veined wood should also be avoided.” 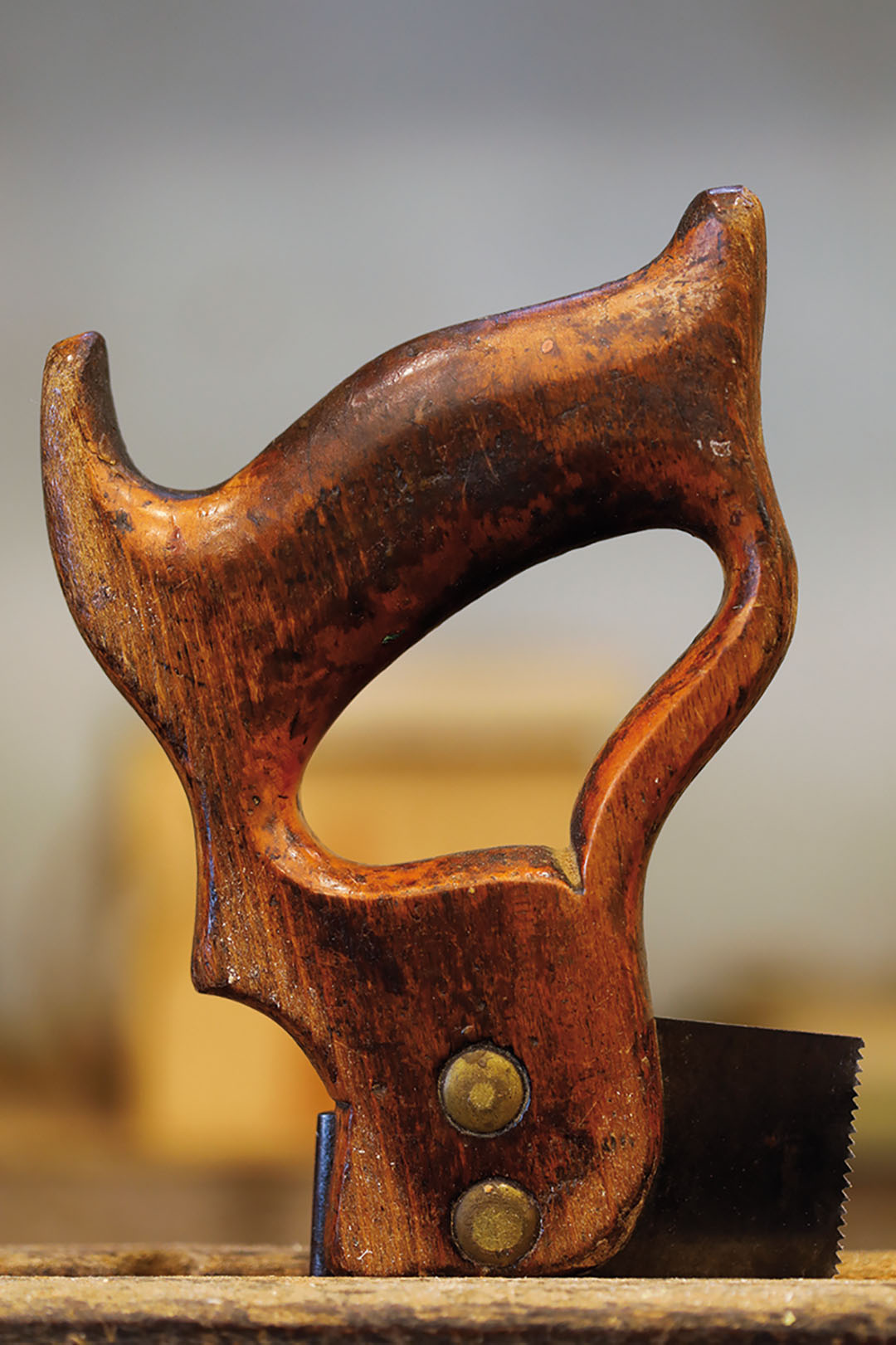 The perfect, precise cut of the noble woods requires suitable tools that live up to this art.

The art created by the Canhoto family is mainly sought after by private customers with family pieces, collectors, antique shops and religious and government institutions. The majority of customers are Portuguese, but there is an increasing trend in the African, European (Spain, France and Switzerland) and American (Brazil and the USA) markets. One of their achievements best known abroad is the restoration of the six organs in the Royal Basilica in Mafra in 2009, in partnership with master organ builder Dinarte Machado. The complex restoration work of these instruments, built in 1906, was awarded the EU Europa Nostra Award in 2012.

The Master of Secrets says that the future looks bright. Soon, the third generation of the family will be joining this wonderful world of woodcarvers. Love and passion for art were instilled into my granddaughters from an early age, just as I did with my own children. Where possible, they were invited to take part in the family’s art. Now they are the ones who ask to come and help out in the workshop during their school holidays… it reminds me of how it all started with me.” 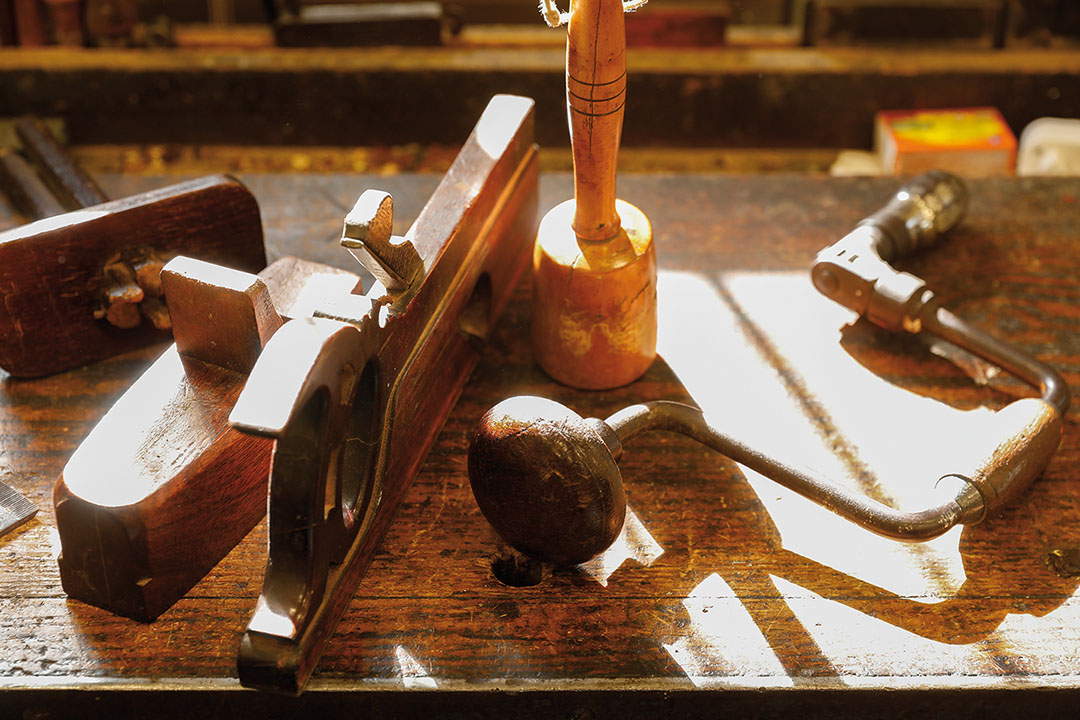 The tools and knowledge remain the same, though the arrival of João and Carla have brought creativity and innovation to the workshop. 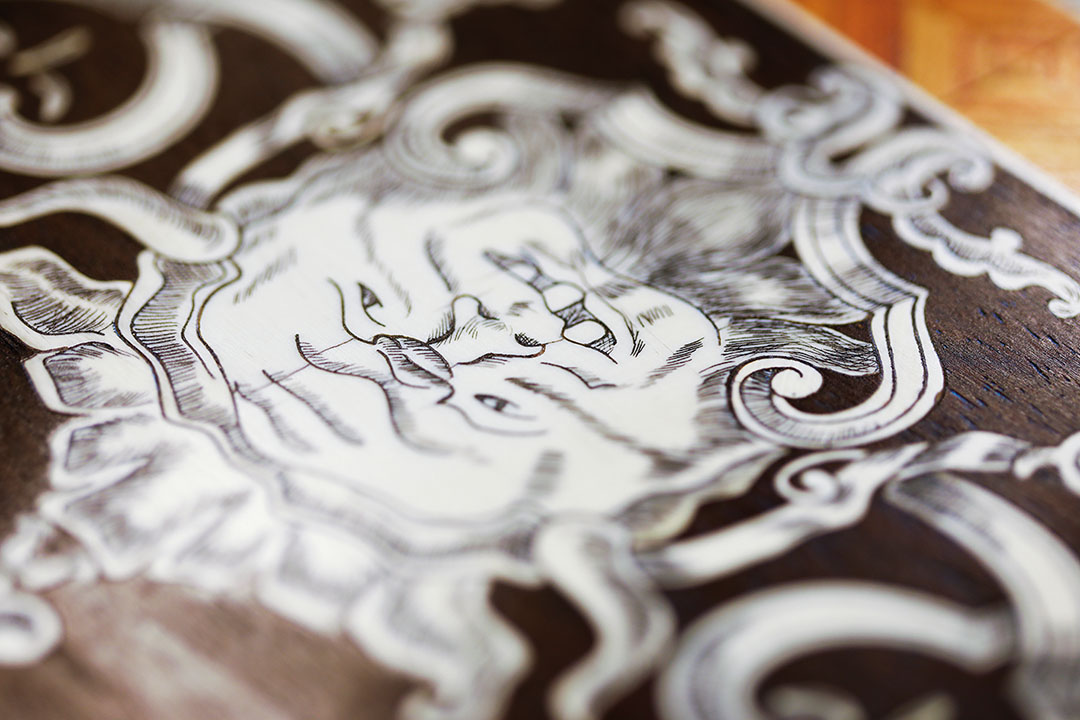 Detail of hand-painted ivory inlay on the Ladies’ Table. 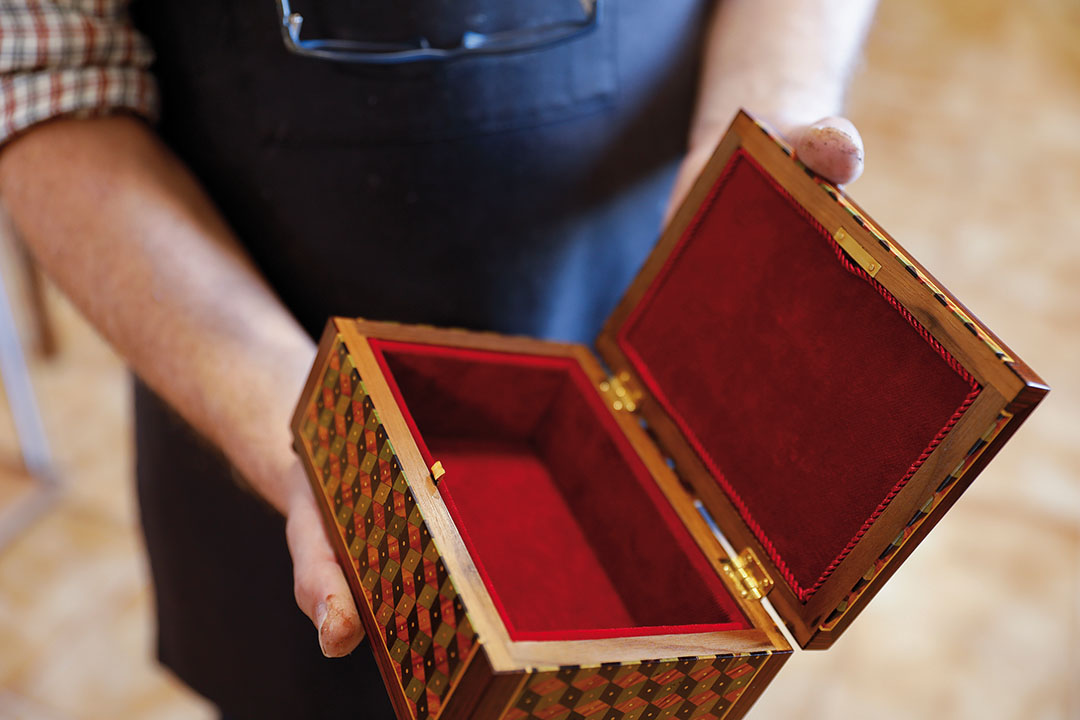 In Portuguese, these tiny compartments are called secrets, as they are made to hide precious things inside tables. 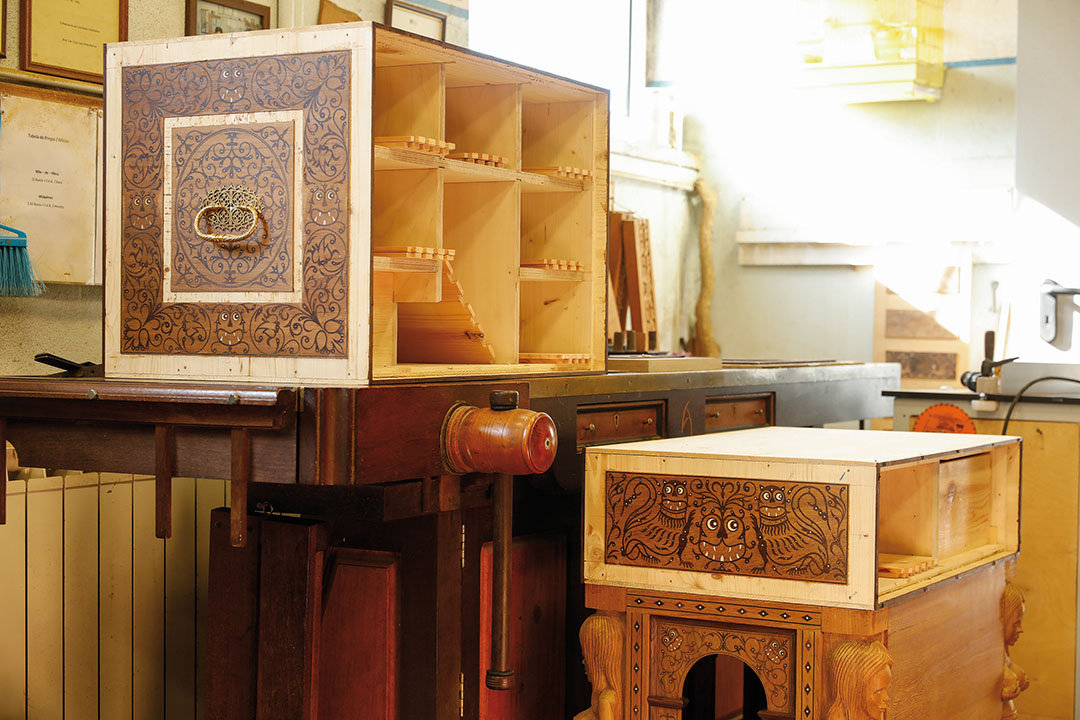 Called “Tiger”, this Indo-Portuguese cabinet is part of a limited edition, with only ten pieces being made. It is inspired by the furniture made in Goa from the 16th century onwards. 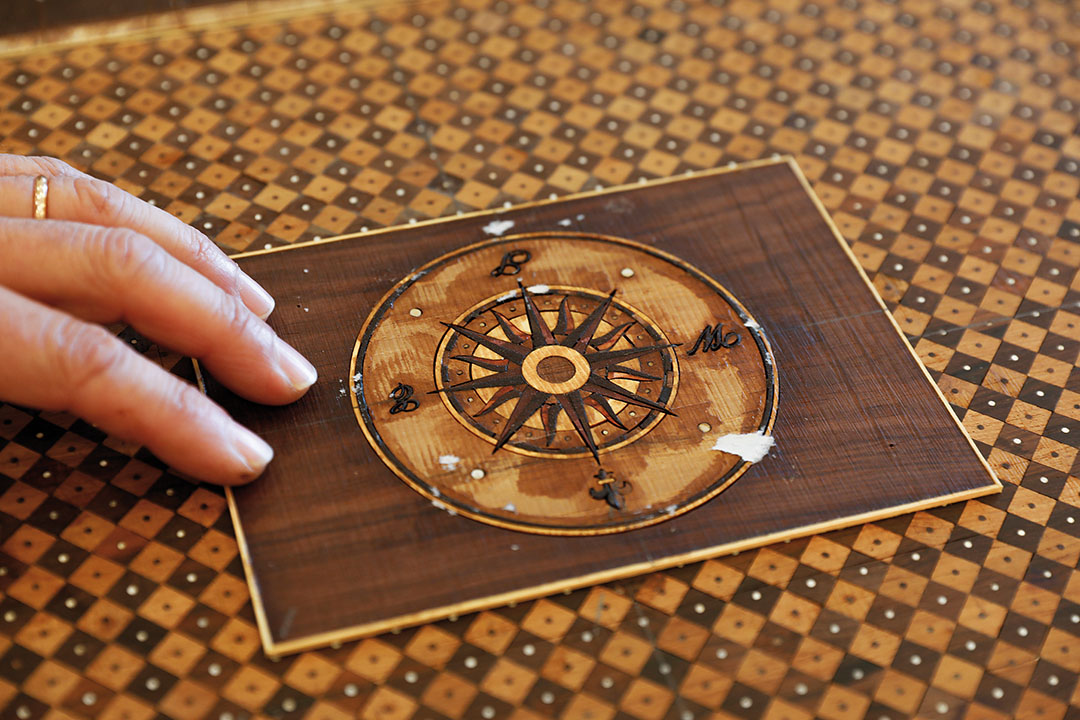 All the small wooden pieces are finger-jointed to fit on the wooden frames. 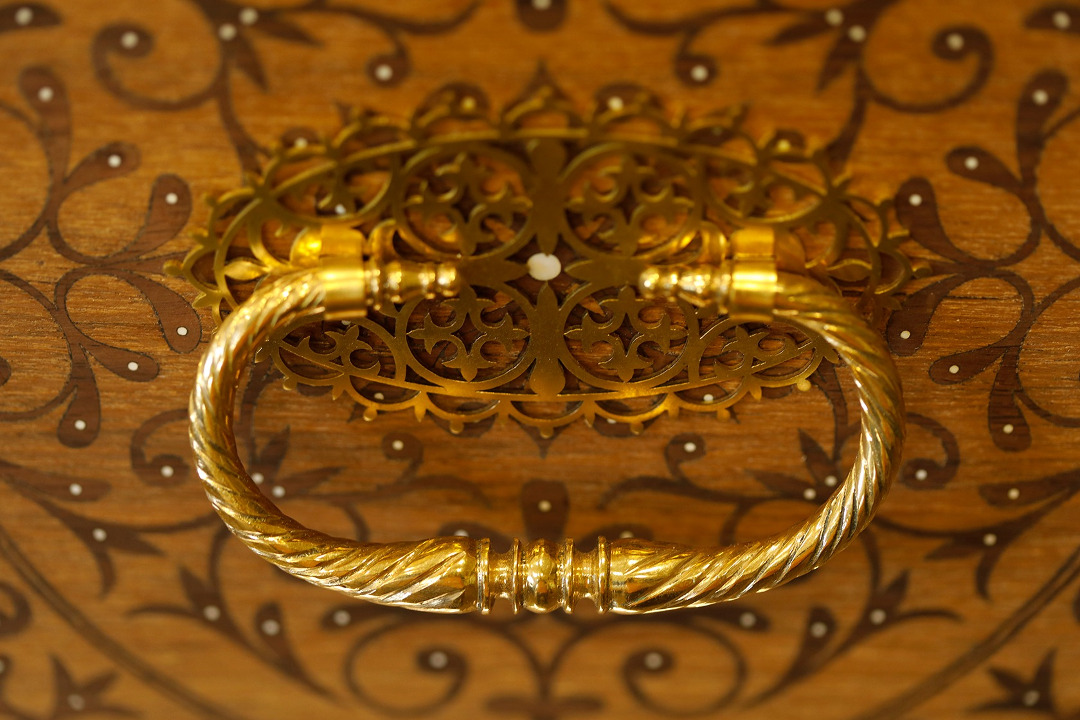 The workshop draws on precious metals such as gold, silver and bronze for structure or decoration purposes.