Saving the ocean, protecting the future. A human race against time, with global gains there for the taking. At Jerónimo Martins, the strategy for sustainable fishing and increasing investment in aquaculture are part of the Group’s contribution to the blue transition. 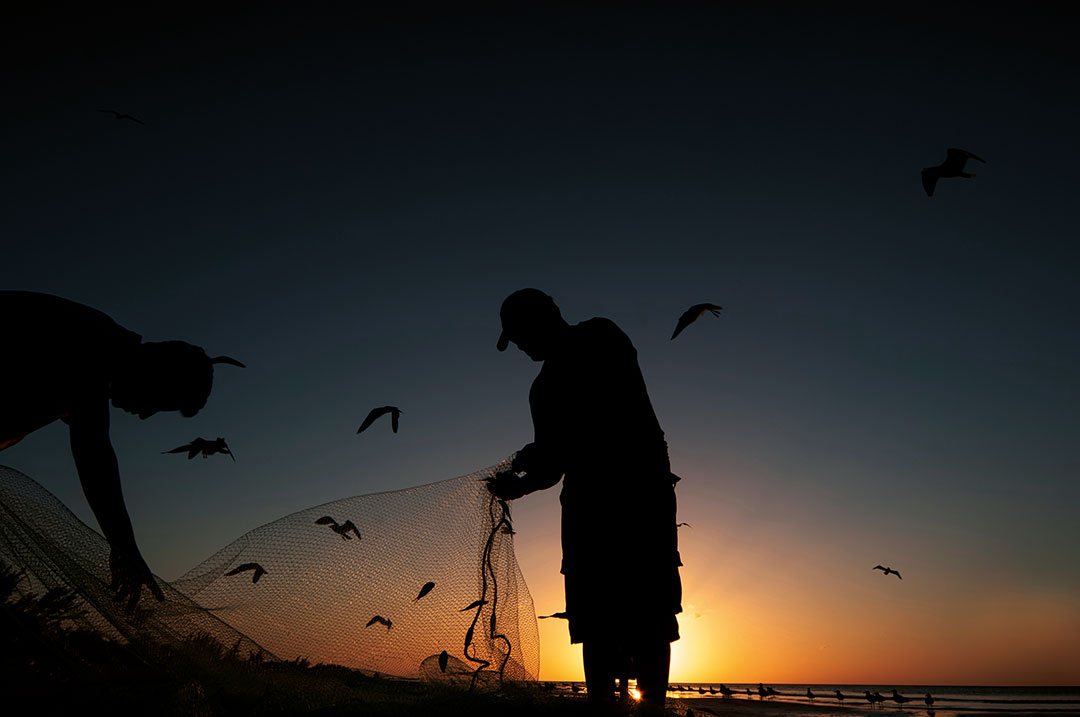 LISTENING TO THE OCEAN

A place of unrivalled beauty and majesty. Where four billion years ago, life on Earth first came into being. And yet, ocean science is more about what we don’t know than what we do: 80% of the marine environment has never been seen or explored. Today, the planet’s largest ecosystem is the shared home of at least 220,000 species and accounts for much of the world’s biodiversity. The ocean is also the livelihood of three billion people, providing food, employment and the essentials of life.

Most human trade is made by sea. A key element of our natural and cultural heritage, the ocean is the foundation of a new blue economy that sets out to be sustainable, safe and pollution-free, and it’s also a key place we look to for answers to the climate crisis. The oceans are one of the Earth’s lungs (forests being the other) and its largest carbon filter: they produce half of the planet’s oxygen and absorb at least one-third of annual carbon dioxide emissions into the atmosphere. They also regulate the planet’s temperature, absorbing more than 90% of the excess heat caused by greenhouse gases (GHG) resulting from human activities.

The first few metres of the ocean alone, closest to the surface, store the same amount of heat as the whole atmosphere. Greenhouse gases pose a triple threat to marine ecosystems as they accelerate warming, deoxygenation and acidification of the oceans. Over the past 30 years, the water temperature has been higher than at any period since records began, with the surface temperature rising by an average of 0.13°C each decade in the last century. 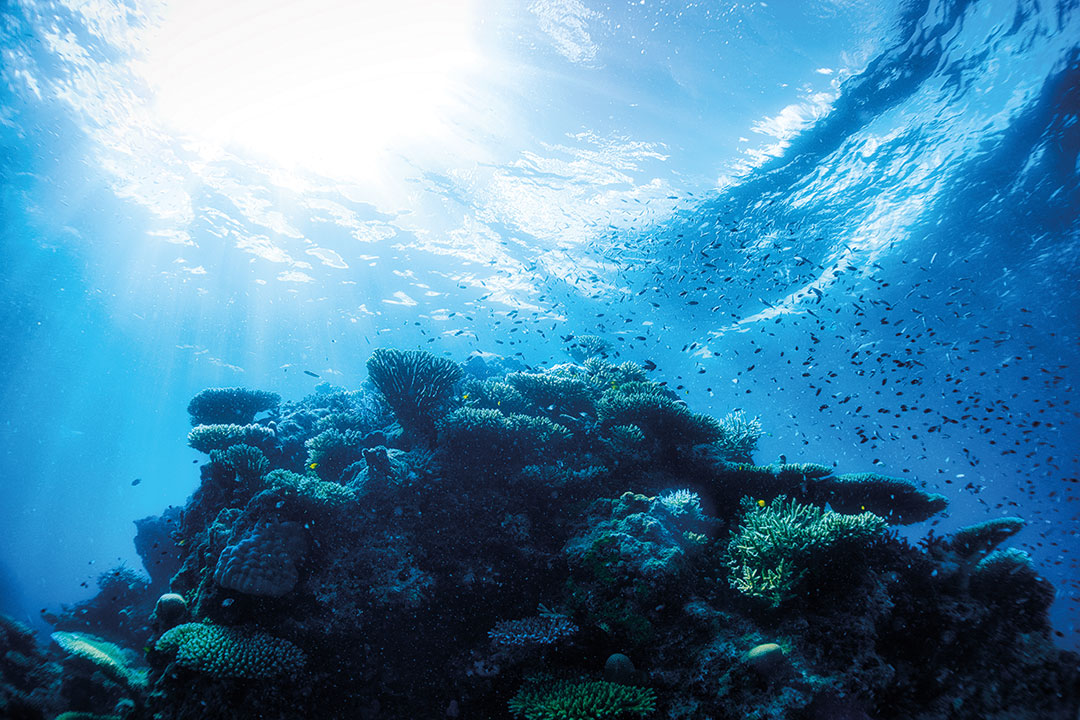 Coral support 25% of all marine life, providing crucial habitat for a myriad of fish and invertebrate species.

As the oceans heat, the water expands, and the sea level rises, increasing the risk of flooding and inundation of wetlands, creating stronger and more frequent storms and hurricanes, bleaching and killing off coral reefs and leading to a more significant and more systematic development of often toxic algae. The consequences of deoxygenation will be disastrous for habitats and coastal economies. There are currently around 500 dead zones, with oxygen levels incompatible with many forms of life, covering an area of more than 245 thousand km2 – equivalent to an area the size of the United Kingdom. And between 30% and 35% of sea prairies, mangroves, marshlands and coral reefs have already been destroyed.

Completing this deadly threesome, the acidification rate is now faster than ever recorded. The last time the ocean pH was this low was 14-17 million years ago when a mass extinction process was underway. If nothing is done, ocean acidification could become three times more severe by 2100. This is especially problematic for corals, oysters, and other creatures with shells or delicate carbonate skeletons weakened by subtle changes in the acidity balance of the ocean. These problems are joined by others too familiar: unsustainable fishing (90% of fishing resources have been exploited or over-exploited), illegal fishing, maritime traffic, deep sea mining techniques and pollution.

More than 400 million tonnes of plastic are produced each year, and according to the WWF, between 5 and 12 million tonnes end up in the sea – the equivalent of a fully loaded rubbish lorry every minute. With many scientists predicting that half of all marine species will be at risk of extinction by 2100, the oceans, which humanity once took for granted, have a troubled future. Protecting the oceans means defending humanity against collapse. The good news is that there is still time. Not much, but some.

SAVE THE OCEANS, PROTECT THE FUTURE

After the largest-ever ocean-themed event was hosted in New York in 2017, this year was Lisbon’s turn, hosting the United Nations Ocean Conference jointly with Kenya. With the slogan “Save the Oceans, Protect the Future”, the conference was held in June and brought together more than seven thousand people from 140 countries, including heads of state and government, ministers, specialist agencies, international organisations, non-governmental organisations, businesses and universities. All debating solutions for sustainable management of life in the seas. The conference ended with the approval of a political declaration recognising a “collective failure” in four of the ten targets established in Sustainable Development Goal 14 and that there was a need to be “more ambitious to resolve the terrible state of the ocean”. 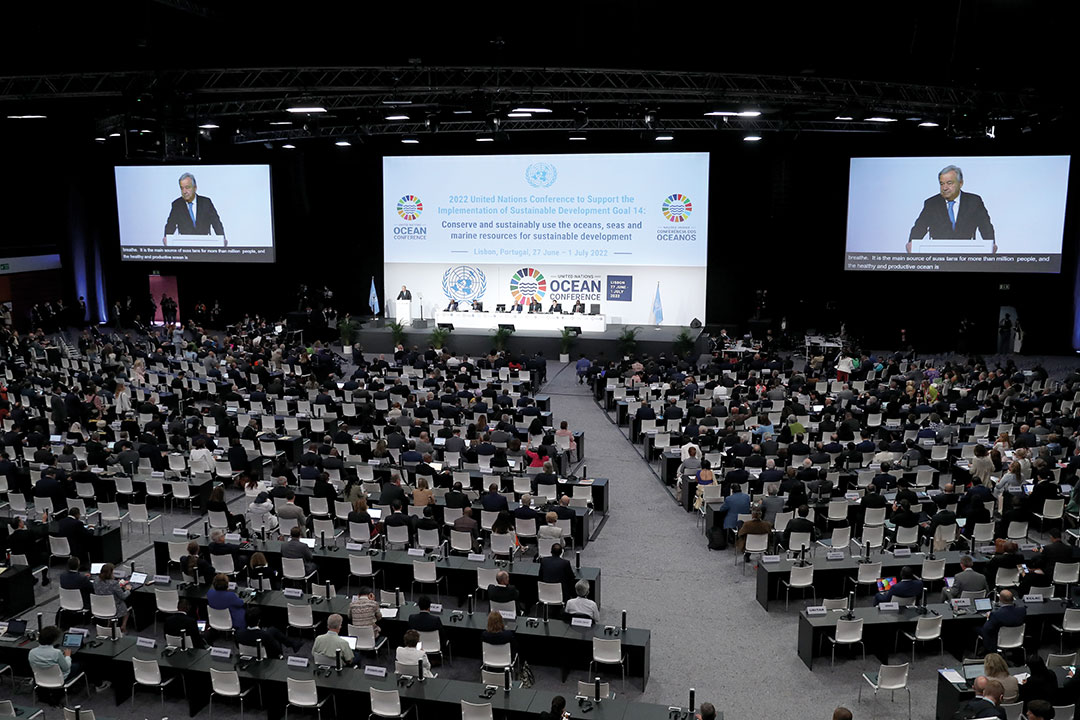 The second UN Oceans Conference ended with the signing of a political declaration recognising the “collective failure” to conserve marine ecosystems and the need to be “more ambitious to resolve the terrible state of the ocean”.

Lisbon hosted several side events alongside the United Nations Ocean Conference, including the One Sustainable Ocean Initiative. The programme included dozens of talks and workshops, exhibitions, screenings and art installations, all aimed at a varied audience, ranging from leading companies to startups, scientists and academics, NGOs and the general public. Pingo Doce was the main sponsor of One Sustainable Ocean.

The partnership with the organisers happened very “naturally, given that the aims of One Sustainable Ocean are unambiguously aligned with the missions and values of Pingo Doce’s Love the Sea programme”, according to Filipa Pimentel, Sustainability and Local Impact Director of the Company. The Jerónimo Martins Group contributed in various ways, most notably with show cooking sessions featuring sustainable recipes and an area devoted to science and research where startups and co-labs could share their projects.

WHAT IS THE CATCH?

For lunch, braised sea bream with parsley sauce. It is a healthy and practical option, a meal rich in high biological value proteins, B-complex vitamins – including B12, to give you more energy for the rest of the day – and minerals, such as phosphorus and potassium. What’s more, you will experience the taste of the sea in every mouthful of the fresh, firm-textured flesh. This fish arrived at the supermarket fish counter in the morning from the clear waters of the Atlantic – to be precise, from Madeira’s island coast.

In addition to the taste, the aroma and the appearance (because you eat with your eyes first), there’s something else, something that we all value more and more these days: the guarantee of quality and sustainability of our food. The fish has lived in its natural habitat, the open sea. The cages that house the fish are placed where there are permanent currents, ensuring the water is constantly renewed. In the drive towards environmentally, socially and economically sustainable fishing, informed consumers and responsible retailers are just two links in the extensive and complex chain of fisheries and fish farms. 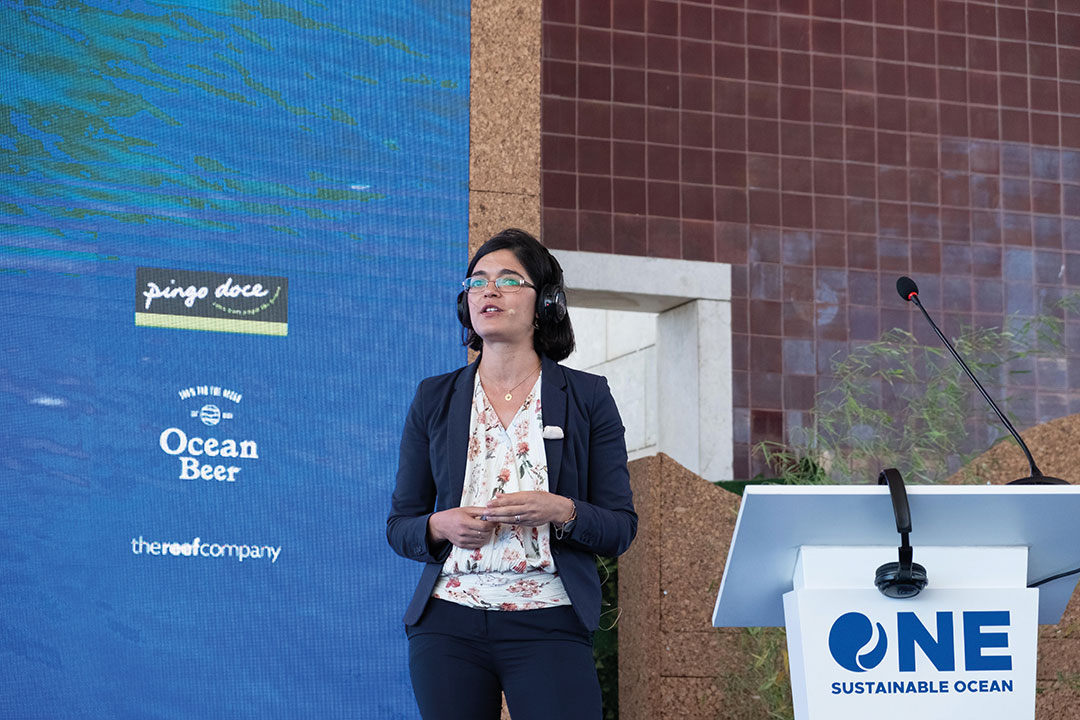 The fishing sector provides a livelihood to 58.5 million people worldwide and needs to be organised around strategies designed to address the problems of overfishing and illegal fishing. Respecting human and labour rights must also be taken into account. Long-term monitoring of marine resources confirms that stocks continue to decline. The State of Fisheries and Aquaculture (SOFIA, 2022) report found that the percentage of stocks no longer biologically sustainable has deteriorated significantly, increasing from 10% in 1974 to 35.4% in 2019.

This continuous pressure on wild stocks requires targeted efforts along the whole chain, from governments to economic agents and consumers. According to Ana Rovisco, Head of ESG Relations – Environment at Jerónimo Martins, “it is everyone’s responsibility. But food retailers have a specific role to play, which starts by guaranteeing that the products they sell comply with a set of environmental and social standards, thereby ensuring that they can continue to do business in the future”. This is a vital issue for a company that sells over 200 fish references – and 88 million kilos of fish a year.

MOST CAPTURED SPECIES IN THE WILD

One decision taken by the Group was to stop selling the European eel in 2016 (Anguilla anguilla): “This fish was actually at the maximum level of risk – Critically Endangered – where the next level would be Extinct in the Wild. We also realised that, although the fish was harvested from farms, it had only been fattened up at the farms. This means the juveniles still have to be sourced from the wild, as currently it is not possible to ensure that this species is fully produced by aquaculture methods”. Other stocks have also merited special attention, such as two species which are a favourite on Portuguese and Polish tables, Atlantic bluefin tuna (Thunnus thynnus) and cod: “Cod stocks in Canadian waters are at a more vulnerable state than stocks in, for example, the seas of Norway or Iceland, where current fishing levels are not compromising the natural regeneration capacity of the species.”

The Group’s sustainable fishing strategy is committed to ensuring that the fresh, frozen and canned fish products it sells don’t contribute to the overexploitation, depletion or extinction of fish species. Decisions on which fish to sell are linked to the conservation status of the species. The Group bases its policies on the IUCN Red List, which classifies species into nine risk categories, which include: Vulnerable, Endangered, and Critically Endangered. Group stores don’t sell species classified as Critically Endangered. Endangered species can be sold if obtained from fish farms, sustainably managed stocks or have a sustainability certificate. Finally, there are restrictions limiting commercial activity involving Vulnerable species not obtained from fish farms, sustainably managed stocks or without a sustainability certificate. 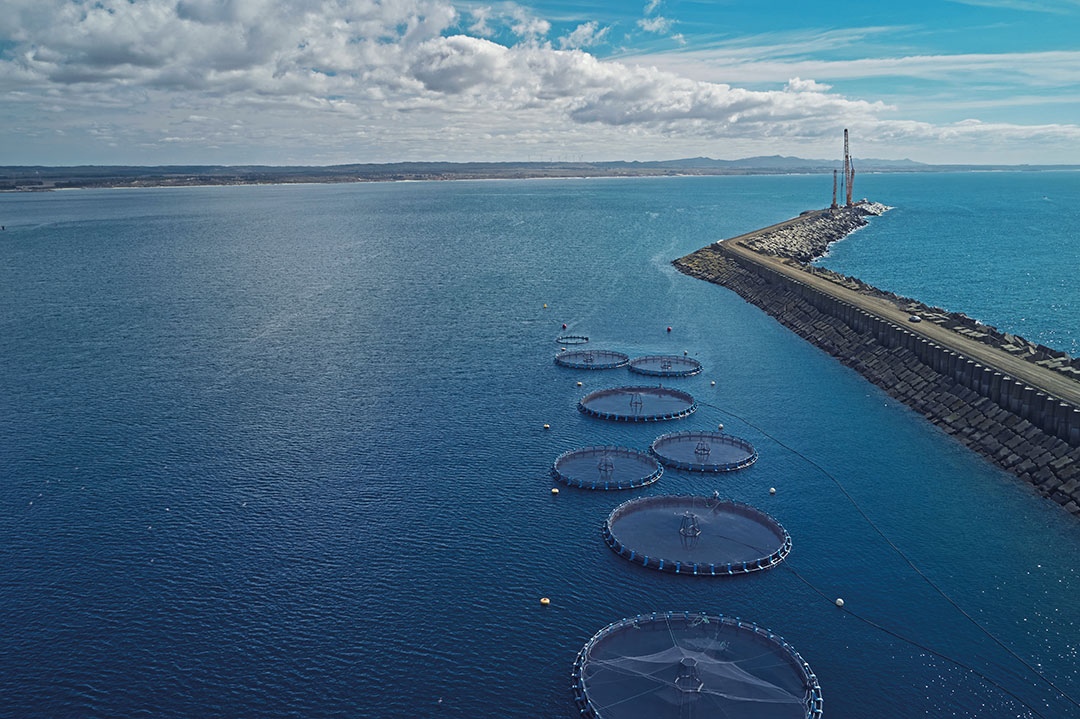 SEAFOOD OF THE FUTURE

In 2020, fish farms accounted for over half of all fish produced. Fish farms produced 121 million tonnes of fish out of a total of 214 million tonnes produced worldwide, with 91.6% of farmed fish originating in Asia. These figures demonstrate that farmed fish is a potential solution to the growing demand for this animal protein. Anticipating these emerging trends, in 2016, the Jerónimo Martins Group began to invest in open ocean fish farms, where fish can grow in its natural habitat. The first units were set up in Portugal (Sines and Madeira Island), and the Group is also investing in facilities in the south of the country (Algarve) and Morocco.

Pedro Encarnação, Director of Seaculture (a Jerónimo Martins Agro-Alimentar company), says that the main advantage is “taking pressure off wild stocks while guaranteeing that the consumer has access to high-quality fish”. Jerónimo Martins Agro-Alimentar began by producing sea bass and sea bream and is evaluating the possibility of adding corvina to its portfolio. “Morocco has excellent conditions to grow corvina, especially due to the water temperature”, according to Encarnação.

On the eve of the United Nations Ocean Conference, the Group announced that it would be investing 16.8 million euros in acquiring a 10.1% stake in the Norwegian sustainable salmon production company Andfjord Salmon. The Norwegian company has a patented technology based on a flow-through system to develop shore farming in low-density tanks. Pedro Encarnação believes it is “a unique project for recreating natural conditions of the salmon inside the tank, in terms of innovation and the system they use”.

THE OCEANS’ TOMORROW STARTS ON LAND

The Group’s goals for 2025 related to fighting marine pollution also involve land-based actions designed to positively impact the world’s oceans. The Group’s overarching ambition is to ensure that all private brand plastic packaging is reusable or recyclable and contains at least 25% recyclable content. Jerónimo Martins is also committed to reducing plastic packaging by 10% (measured according to sales volume) compared to 2018 and reducing the virgin plastic used in private brand packaging by 15%, compared to 2018. 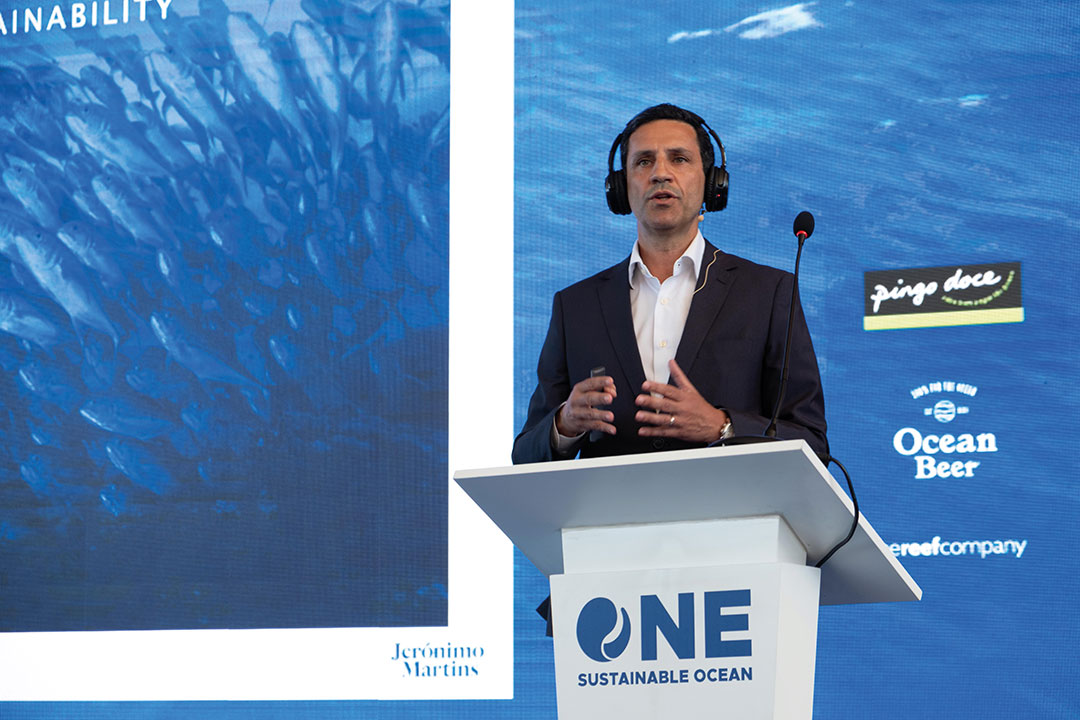 Due to the increase in demand, Pedro Encarnação, Director of Seaculture (the area of Jerónimo Martins Agribusiness dedicated to the production of aquaculture fish) points out that the Group will continue to invest in the production of sea bass and sea bream, and will also extend its investment to new strategic species, such as salmon.

The worth of Words
Beneath the Glow
Rewilding the Sea
Plastian the Little Fish
“Aquaculture is clearly the most sustainable alternative to Fish Supply.”